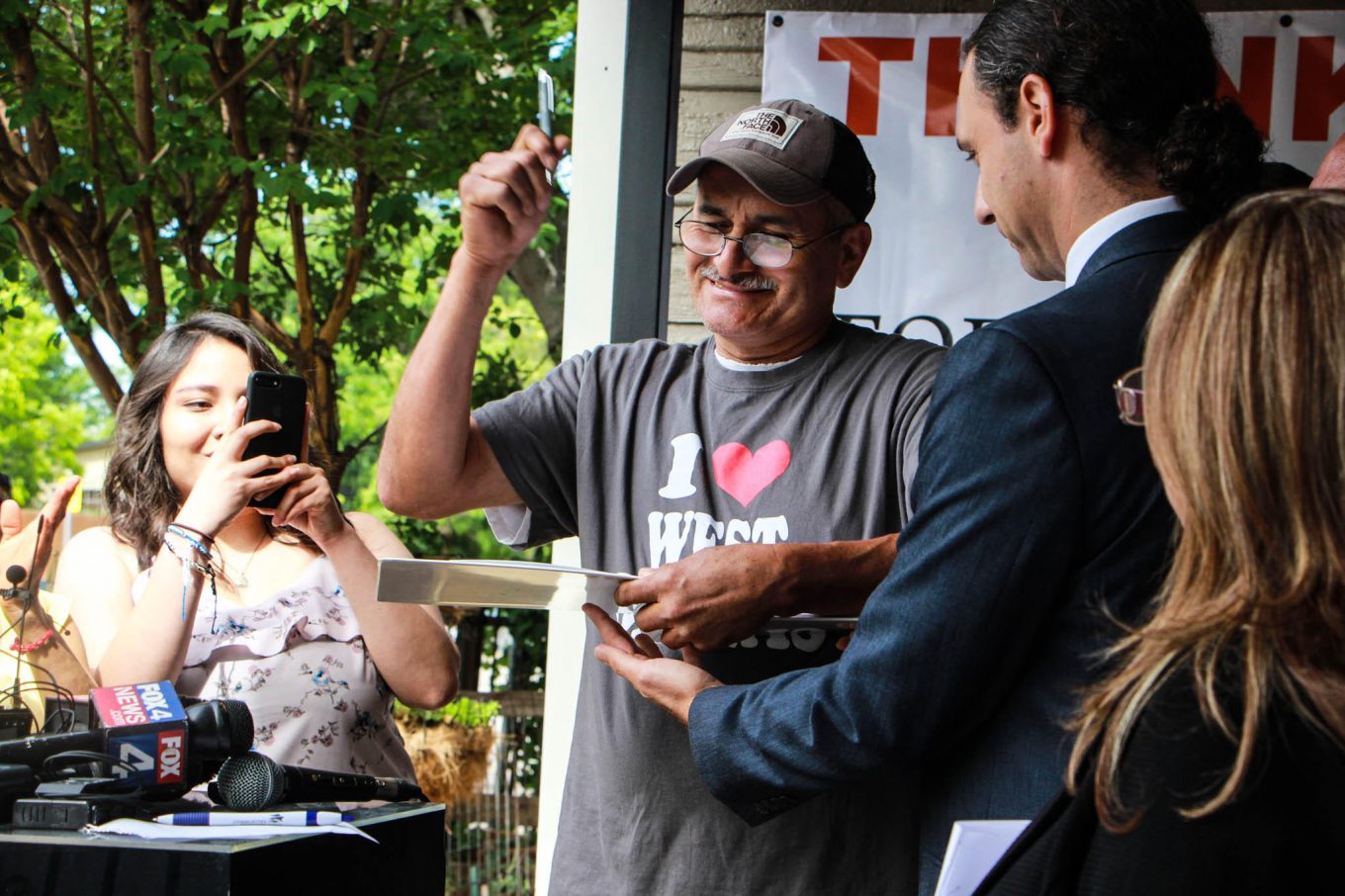 Merced Correa is a longtime renter who appeared at a news conference on Monday to celebrate the house he's about to buy in West Dallas. Photo/Jessica Diaz-Hurtado
The KERA Radio story

HMK Ltd., which owns the homes, plans to offer 75 occupied houses, and a few dozen vacant homes for sale– each for $65,000. HMK will finance 20-year mortgages. Monthly payments should be about $575. Many of the renters are low-income and pay as little as $300 a month in rent.

“This is a great community, and with new homeowners, it will be even greater,” Khraish Khraish, HMK Ltd. co-owner, said at a news conference Monday morning.

Khraish said it got “harder and harder to sleep at night” thinking that more than 100 families would be “put on the street.” He describes the offer as “a win for West Dallas” — and for the city, too. 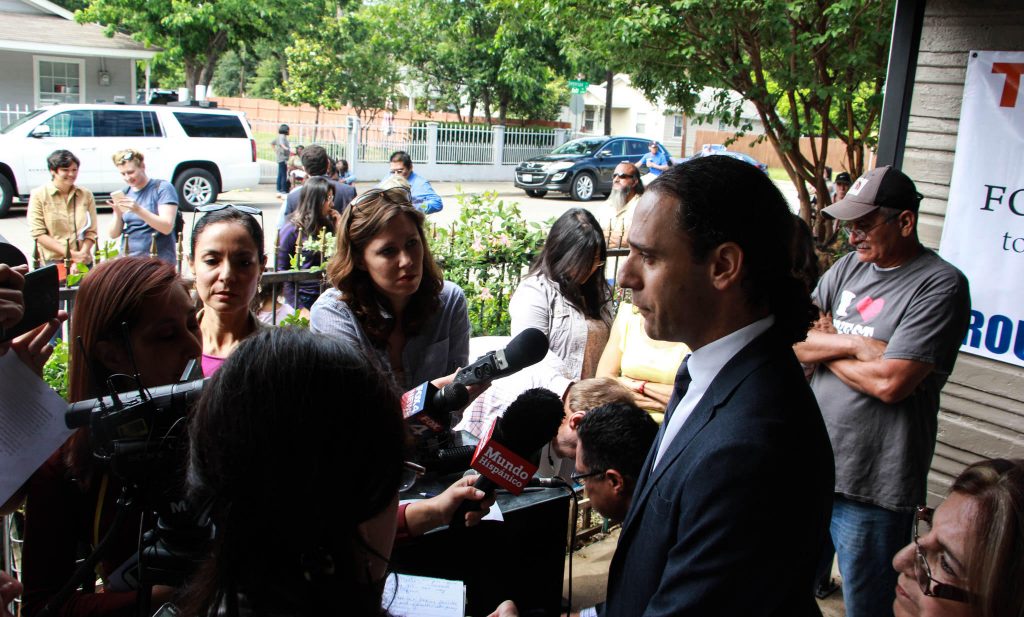 Khraish Khraish, at right, talked with reporters on the morning of May 22 in West Dallas. Photo/Jessica Diaz-Hurtado

‘I am encouraged,’ mayor says

Dallas Mayor Mike Rawlings responded with a written statement that said, in part: “I am encouraged that Mr. Khraish has decided to do what we asked him to consider nearly two years ago: sell some of his homes to his tenants. We have long felt that increasing home ownership will help lift up our neighborhoods in part by providing a sense of pride among our residents. It’s a key strategy to protect against gentrification in areas like West Dallas.”

“The opportunity for HMK tenants to purchase their homes is something we have been seeking on their behalf for some time. Mr. Khraish’s apparent change of heart is a positive development,” she wrote. “However, it is important that residents understand what they are agreeing to and that any action taken by Mr. Khraish is in compliance with the state property code. The buyers need to be informed and should seek out independent legal counsel regarding the contracts before they sign anything.”

Alonzo faces a June 10 election runoff with Omar Narvaez, who was beside Khraish at Monday’s press conference.

Renters in 305 rental homes had faced a June 3 deadline to move out, and more than half of the tenants have already left the neighborhood. The rental homes were no longer up to code after the Dallas City Council passed new housing standards last fall. Khraish has said upgrading the rental houses would be too expensive. Demolishing the houses and starting from scratch would price those families out of the new homes.

The city of Dallas had agreed not to fine the landlord for violations through the end of the school year. As of earlier this month, about 110 families renting HMK homes remained in the neighborhood. Because they pay just a few hundred dollars a month in rent, they don’t know where to go. 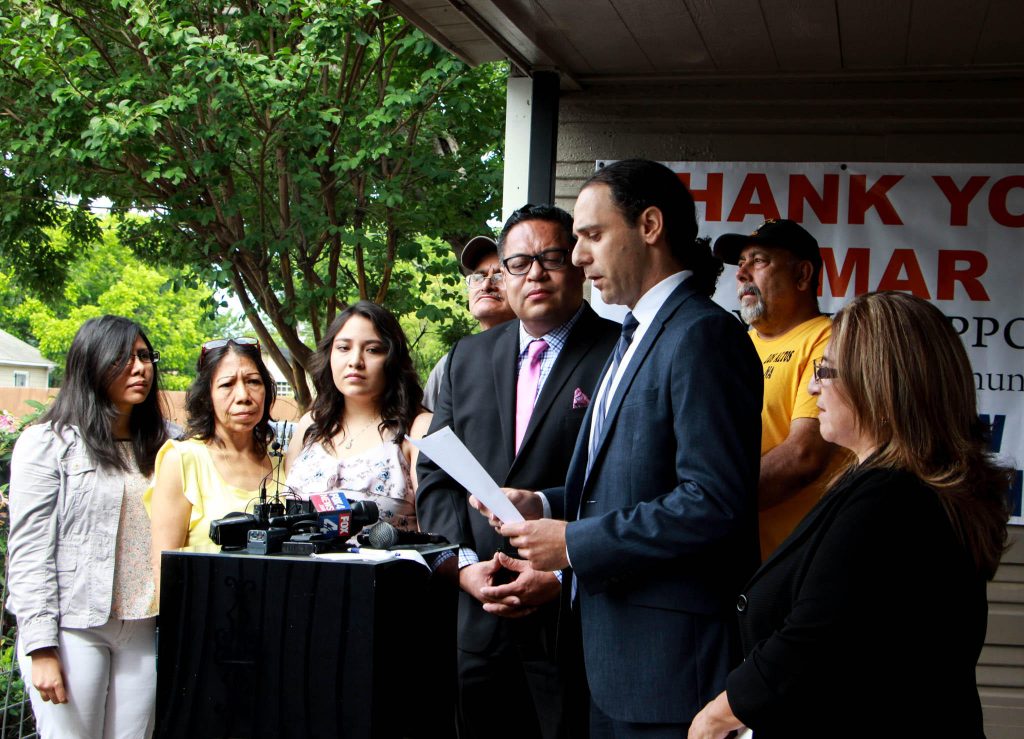 Several renters appeared at Monday’s news conference – one of them was Joe Garcia. He and his mom live in a rental house that HMK considers a “re-development zone.” Khraish hopes to move the Garcias and about 40 other families into houses that other residents have already left.

Joe Garcia says he’d be happy to move a few streets over if that means he could own a home.

“It would be awesome, I mean great you know,” Garcia said. “Because this is our place of settlement, you know? I guess a little bit more relief. It helps a lot from the stress I’ve been going through.”

For families paying $300 to $500 a month in rent, the thought of moving was terrifying. Noemi Piña couldn’t find anything she could afford.

So Monday, when HMK announced the news, Piña felt a surge of hope.

What You Need To Know About The West Dallas Housing Crisis

When West Dallas Tenants Leave, They Pay More In Rent -- And Miss Home