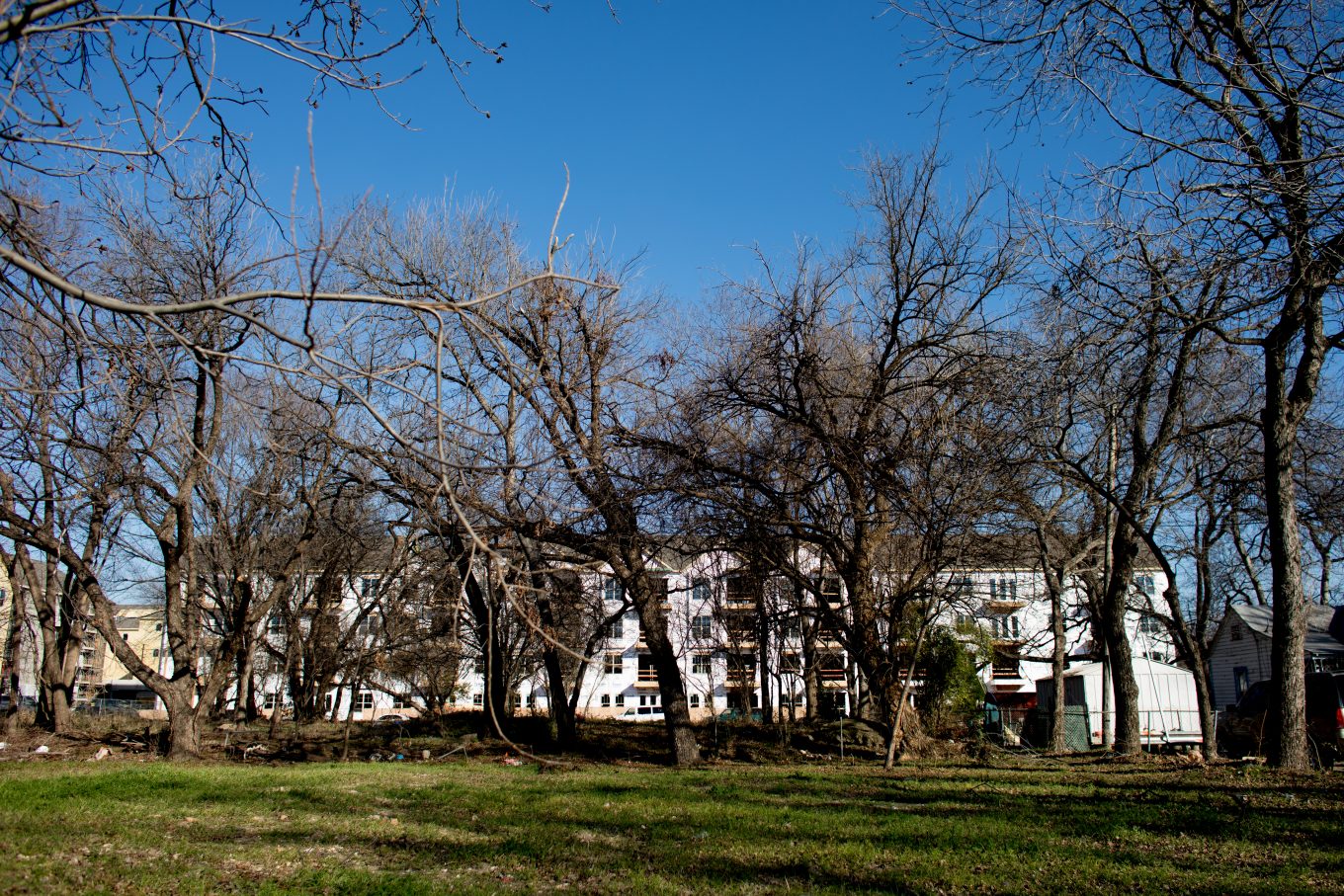 A view of construction of The Austin Trinity Green in Dallas.
The KERA Radio story

West Dallas has been an afterthought for the better part of a century — today it’s booming. The last four years have been a construction frenzy of new restaurants and upscale apartments. Some of the oldest residents don’t recognize the place. And development in the area is just getting started.

Roll down the window in West Dallas, and there’s no escaping the cacophony of construction. Excavators and forklifts are ubiquitous, carving out space for development and hoisting the bones of new apartments.

Like everything else near the bridge, the Trinity Groves administrative offices are under construction, too. An edgy concept bar is in the works on the first floor — one that will require an app for entry and help young professionals network. 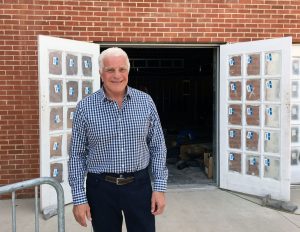 Phil Romano is the founder of Trinity Groves. Photo/Courtney Collins

Romano and his partners own 70 acres in West Dallas. The restaurant incubator is theirs and they have pretty much all the land where newly built and under-construction apartments sit. Luxury hotels and multi-story office buildings are down the road.

“If everything pans out right, this is going be the most recognizable destination in Dallas,” Romano says. “Where are you? We’re on the other side of the bridge. What bridge? … Point up in the air and you can see it.”

The Margaret Hunt Hill Bridge is the beacon of the “new” West Dallas. At first, critics rolled their eyes, nicknaming it “The Bridge To Nowhere.”

The building boom on the other side has silenced the scoff. 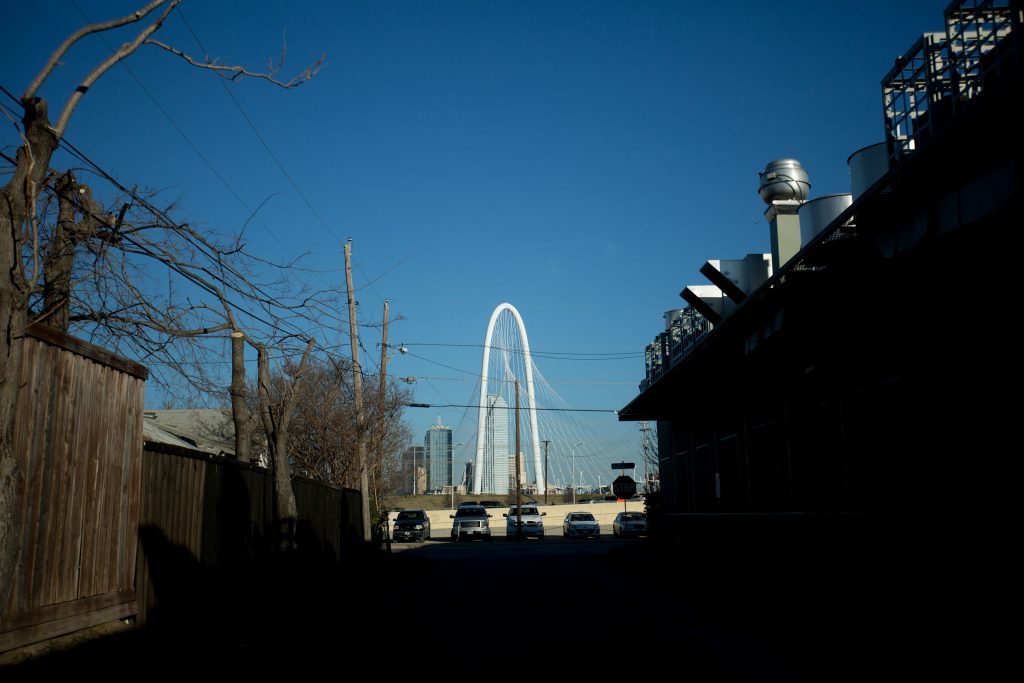 A view of the Margaret Hunt Hill bridge from a West Dallas neighborhood. Photo/Allison V. Smith

The new development butts up against aging homes, and families who’ve lived there for decades.

“In general, I think it’s cleaned up the area for them. We hire as many as they want to work here; that’s no problem,” Romano says. “Even some of these neighbors down here next to us, the people that own their own buildings, we go down there and fix their porches, cut their grass, the older people. We help them out — they’re our neighbors.” 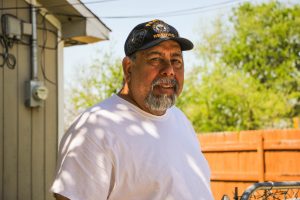 One of those neighbors is Ronnie Mestas, a community leader who grew up in West Dallas. He sees what’s happening — the wave of new restaurants, open air patios, sleek studio apartments. He hopes residents won’t fight the tide.

“It’s a different culture now, and it doesn’t mean that you have to be afraid of it or run from it,” he says. “Learn from it.”

“The new ones being built are really nice and they’re helping us to, I guess, just make our neighborhood kind of blend in with what’s coming,” Mestas says. “Because you go up down this street, Rutz Street, has the most HMK homes.”

Those HMK homes are central to a conflict that’s been building for months. Families living in these homes pay as little as $300 a month in rent. Mestas is worried about them.

“If everything pans out right, this is going be the most recognizable destination in Dallas.”
Phil Romano, Trinity Groves founder

‘No one cared about West Dallas’

The city toughened housing standards last fall. That left 305 rental homes owned by HMK Ltd. no longer up to code. The landlord says fixing them would cost millions of dollars. He decided to close them down.

The city agreed to not fine HMK and let tenants stay through the end of the school year. A few weeks before the June 3 deadline, many renters are still scrambling to find an affordable replacement. Mestas says in West Dallas, there isn’t one.

“These are the last homes that you are going to find anywhere at that price,” he says. 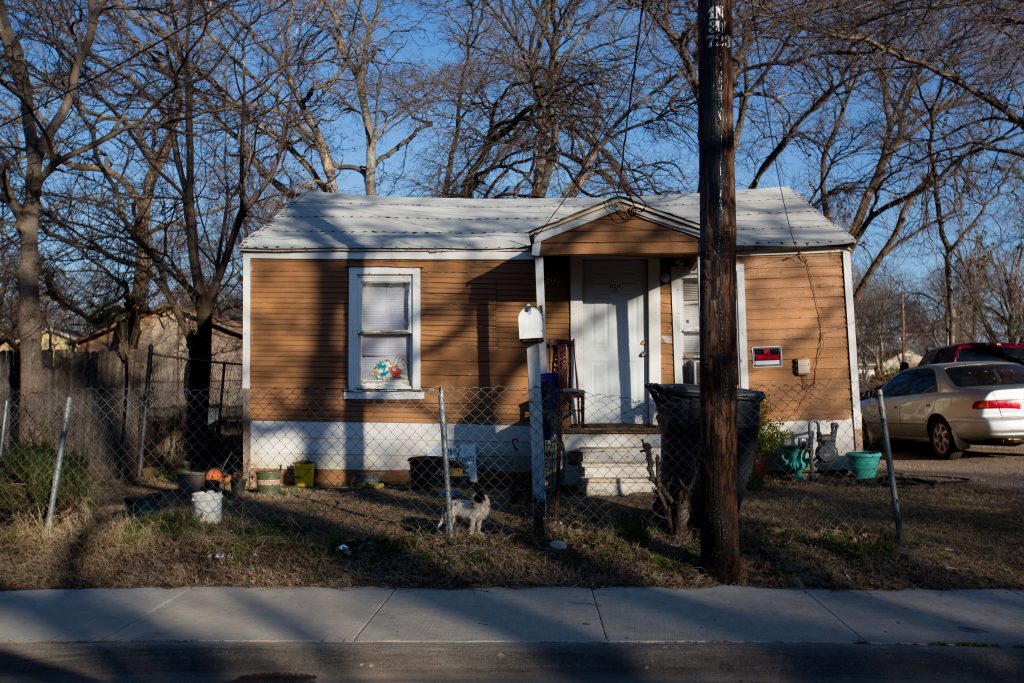 A house on Chicago Street is one of the 300 homes owned by HMK Ltd. and slated for closure at the end of the school year.

Habitat is in the business of building new homes that low-income families can afford to own. In West Dallas, the shiny new development doesn’t gel with past neglect, Hall says.

“No one cared about West Dallas even though it was annexed into Dallas; nobody really cared about it,” Hall says. “In fact, they changed the names of the streets going north to south. Inwood is actually Hampton on this side. Sylvan becomes Wycliff on the other side.”

Hall points out that West Dallas was “un-gentrified” for a long time. A lot of those same families still live there. All the new construction in their backyard is financially out of reach.

“You don’t turn around 30 or 40 years of neglect overnight. And it’s not going to be pretty every time you have to make a decision. And we as a city need to understand that,” he says.

Many people are wondering: What’s the solution? When old, rundown housing is no longer an option, where do the families that have lived there for decades go?

Diane Yentel, with the National Low Income Housing Coalition, says Dallas has a “severe” housing shortage. Just 19 affordable homes are available for every 100 low-income families who need a place to live. That’s more than 80 percent of people in Dallas who don’t know where to turn.

How West Dallas Families Are Coping With Changes