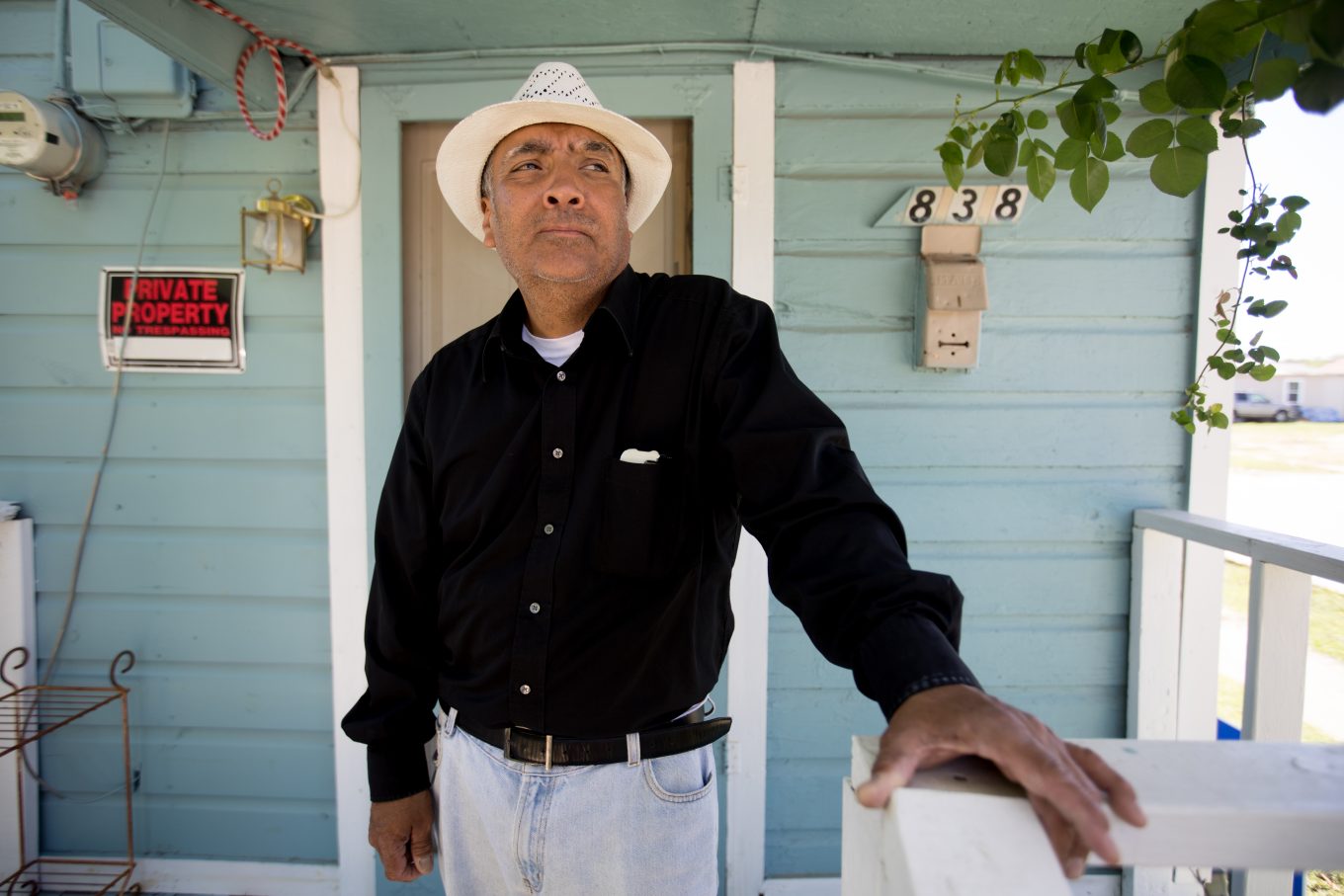 Joe Garcia on the front porch of his home where he lives with his 84-year-old mother on McBroom Street in West Dallas. Photo/Allison V. Smith
The KERA Radio story

The days are numbered for 305 weathered rental homes, most of them in West Dallas. The city said they aren’t up to code, so the landlord had to choose: Fix them or close up shop. He picked the latter. With a June 3 deadline looming, many families living in those homes already have left. But some people remain with no plan for their next move.

‘I call it the wall’

West Dallas in 2017 is a tale of two neighborhoods. The Trinity Groves restaurants and apartments cluster at the base of the Margaret Hunt Hill Bridge. Construction cranes continue their westward march, promising new townhomes and shiny studio apartments.

“I call it the wall; it’s the financial wall,” resident Ronnie Mestas says. “Those new apartments that are right there, you know? Because it just looks like it blocks out the whole neighborhood.” 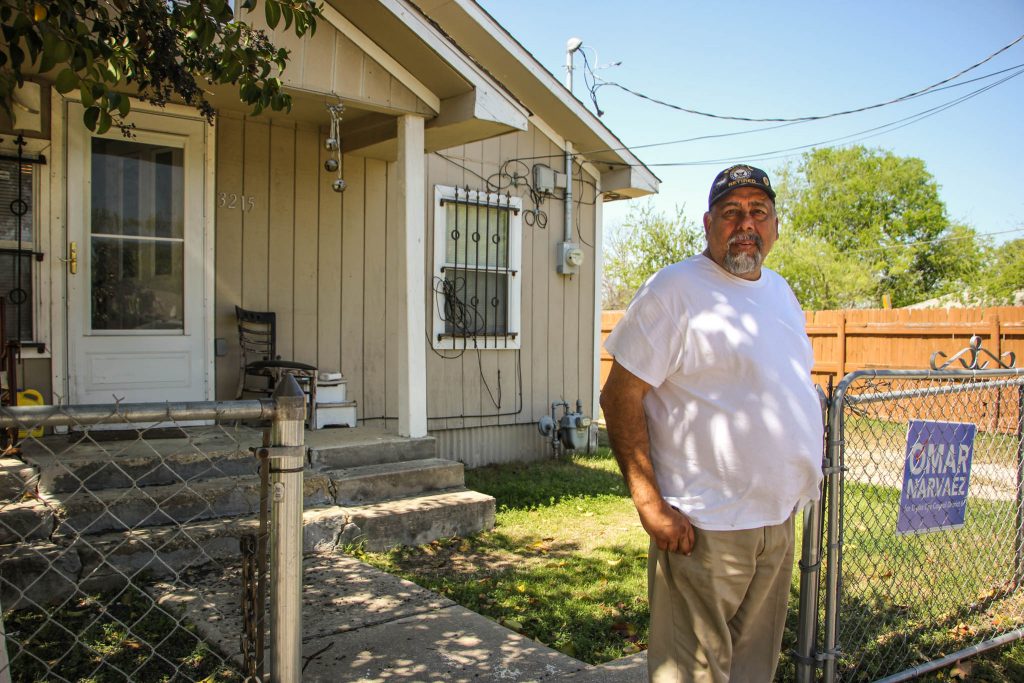 Mestas is a neighborhood leader. He sits on the education committee of “West Dallas 1,” a six-year-old group representing each of the local neighborhood associations. He also grew up in West Dallas. After years in the Navy, he decided to retire here, too.

Mestas doesn’t fear gentrification. He knows it signals change — landlords charging more, property taxes ticking up, more visitors. He says development also cleans up the neighborhood. Before all the new construction, one of his friends was afraid to take her grandchildren to play outside.

“She couldn’t go there because it was a swamp,” Mestas says. “There was mosquitoes. There were trailers, trash, prostitutes, drug dealers all of that stuff in that area where she’s at.”

He’s also worried about neighbors who live in rental homes owned by HMK Ltd., the ones that will be cleared out in June. Residents were given seven months’ notice to vacate. Mestas says most of them pay $300 to $500 a month in rent.

“These are the last homes that you’re going to find anywhere at that price,” he said.

Joe Garcia, 53, lives in a small two-bedroom house owned by HMK with his 84-year-old mother, Lily. Their house isn’t falling down. It’s got a new teal paint job and recently replaced siding. Still, the floors creak, and the air conditioner sticks out a side window. It’s wedged in with an old piece of wood and duct tape. A garbage bag anchored by a brick flutters off the back side to prevent outside air from flowing in.

They don’t know where to go.

“Not a plan yet but the day will have to come when we’ll have to move out. No ‘if-whats’ about it,” he says.

And that’s hard to swallow because the Garcias love West Dallas.

“Back in ’63, well, I was born here in one of the houses in West Dallas. But they knocked that house down, also. … I’ve been [here] for all my life,” Garcia says.

And his family’s roots are even deeper. Lily doesn’t speak much English. She remembers what West Dallas looked like when her father arrived. 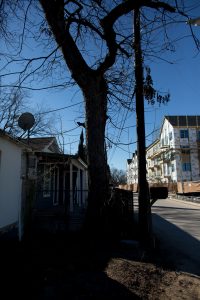 A view of The Austin at Trinity Green under construction. Photo/Allison V. Smith

When her father came to West Dallas, it was mostly empty land, dotted with a few houses.

He wouldn’t recognize the place today — and neither does Joe Garcia. The new apartments are impressive, but renting one is out of the question.

“If I had the money, yes, who wouldn’t? I mean it’s something to look forward for,” Garcia says. “But in the process of it you know, it’s just common sense that we just can’t afford it.”

“Our money situation is always a stretch,” he says.

If an occupant spends more than 30 percent of his or her income on housing, it’s considered unaffordable, according to the National Low Income Housing Coalition.

Caught in the middle

It hasn’t been easy for Garcia. He has epilepsy and says his seizures have kept him from working most of his life. He has to survive on government disability checks. He’s worried a single arrest on his record after a fight in his 20s might prevent him from buying a home one day.

Looming over everything? He’s worried about his mom, who’s distraught over losing her house.

“That’s the way my dad told me before he passed away in his bed. He told me ‘you take care of your mom,'” Garcia says. “So that’s what I’ve been doing since he passed away back in ’89. West Dallas is mostly right now — it’s like older people live here. And they don’t know where to go.”

“People have been here all their lifetime,” he says. “It’s hard for them to move out, you know? … It’s a community that they just come and take out.”

The Garcias are caught in the middle of a conflict that’s been brewing for months. Learn more in the timeline below.

THE LATEST IN ‘NO PLACE TO GO’