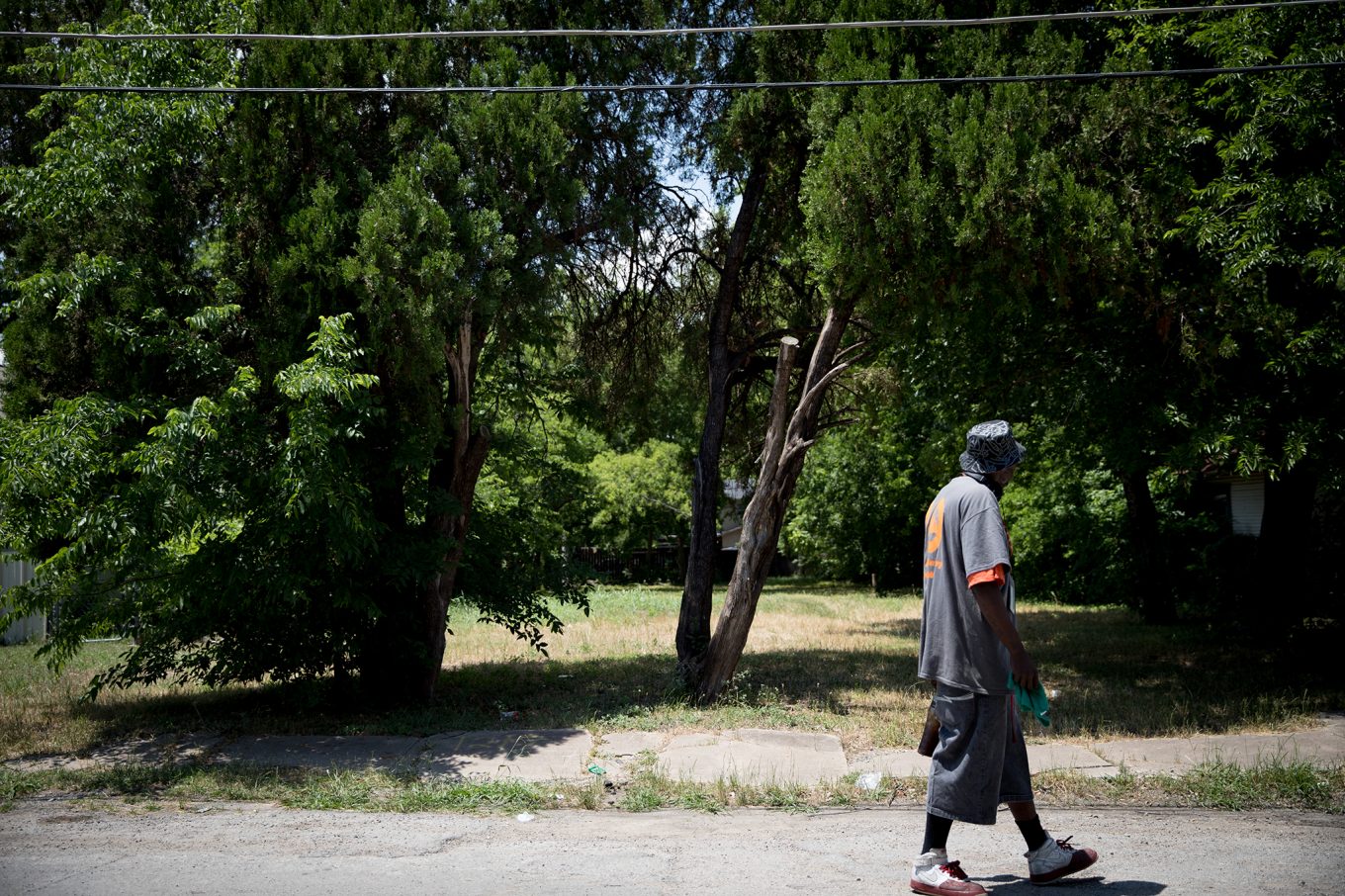 In Dallas, ‘The Rich Get Richer And The Poor Get Poorer’ Rings True

KERA’s One Crisis Away project has looked at life on the financial edge in North Texas for five years — five years that have seen an economic boom in North Texas. To mark that milestone, our new series, “Still On The Edge,” will revisit families we’ve met over the years and look at new research.

KERA’s Courtney Collins talked with Frances Deviney of the Center for Public Policy Priorities about how despite the boom, North Texas still struggles with poverty and inequality.

With a low unemployment rate and hot housing market, North Texas boasts of having one of the country’s strongest economies. But new research on Dallas County from the Communities Foundation of Texas and the Center for Public Policy Priorities paints a different picture.

“It was a stark decline that we weren’t even expecting when we did this analysis,” said Frances Deviney, chief operating officer at the Austin-based Center for Public Policy Priorities.

“That’s huge. In Texas, it was only 2 percent,” Deviney said. “We couldn’t believe the massive drop that was happening in Dallas County and what it meant for people’s opportunities.”

Listen to the full interview in the audio player at the top of this page, or read interview highlights below.

In 1999, median household income in Dallas County was nearly $62,000. In 2015, it had dropped to just under $52,000.
Communities Foundation of Texas and the Center for Public Policy Priorities research
Tweet this statistic

On the connection between low unemployment and slipping income

It’s really something that we’re seeing not just in Dallas County but across the country. What happened particularly in Texas is that after the Great Recession, we saw a great loss of good middle-wage jobs. You could have one job and pay for your family — put food on the table, put gas in the car, get the school supplies, everything you needed. It might not be a luxurious life, but you could have the basic needs. And the jobs that came back to fill those lost jobs were lower-paying jobs — jobs that maybe didn’t have health insurance, that didn’t pay the same wage. And so families were then having to work two jobs or have a side hustle.

On income disparity in Dallas County

On the many ways Dallas County is segregated

You have more opportunities — more people with higher education degrees, starting more businesses,  creating opportunities for their kids because they have more resources — kind of being clustered in north-central Dallas County. Whereas when you spread across the county, you’re not seeing that same level of academic engagement, academic completion, jobs that pay [that] higher income amount. And that maps onto the racial/ethnic segregation in the city as well.

What many people don’t realize is that the racial/ethnic segregation that happens in many American cities, Dallas included, happened by choice. It happened because of policy decisions that were made often — 100, 200 years ago, maybe 50 years ago — about where people were allowed to build a house, buy a house, get a loan or get a loan to buy a house in a certain area. And often that was predicted by a person’s race or ethnicity.

Now, even though we have laws against that today, the ramifications of those decisions are being felt even 50 years, 100 years later. We see that in the wealth that’s being passed down from generation to generation. Were you able to buy a house? Did that house appreciate in value? Could you leave that to your children when you passed away? Could you leverage it to send your kid to college? And those things build on each other over time, so that again, you go back to this idea of “rich getting richer, poor getting poorer.”

Interview responses have been lightly edited for clarity and length.

‘Still On The Edge’ Stories

“Still On The Edge” stories will be published weekly on Tuesdays through July. We’re checking in with North Texans we’ve profiled over the past five years.

When we first met Chris Crowley, he was living paycheck to paycheck from his $9.25 an hour gig at Target. Now he’s 39, and his job at the Home Depot Distribution Center pays $14 an hour, a big improvement. He lives with his parents in the Old East Dallas neighborhood of Jubilee Park, and doesn’t have a car, so his commute to work every day includes hours of DART trains, bus exchanges and plenty of walking. Chris shares about his dream of buying land and owning a house one day, and we’ll visualize what that brutal commute of his looks like. Read our earlier story on Chris Crowley.

Five years ago, Natalie Berquist was a single mom living in Lewisville. She was living in an apartment with her son, Samuel. But an expense she hadn’t planned on meant she could no longer afford the rent, so she moved in with her brother. Today, she’s still working for the same company and she and Samuel still share a home with her brother. She’d love to rent a place of their own, but taking unpaid time off to care for her child’s mental and behavioral health issues means her $17-an-hour salary doesn’t always stretch that far. Read our earlier story on Natalie Berquist.

Lindsay Diaz will never forget hunkering down with her infant son in the bathtub of her Rowlett duplex during the tornado the day after Christmas in 2015. The storm damaged her home, and although she was underinsured, she decided to repair her half of the duplex, and rebuild. Then came a twist: a demolition company accidentally flattened the damaged house—mistaking her home for another, one street over. Two-and-a-half years and one lawsuit later, her home has been rebuilt and she feels settled. But even thinking back to the financial turmoil she faced after the storm makes her feel queasy. Read our earlier story on Lindsay Diaz.

When we first met Shirley Martin five years ago, paying for her rental house on an income just above minimum wage was financially taxing. It made saving money impossible. Since then, Shirley, now 77 years old, has upgraded her income, working as a caregiver at a group home. She’s renting an apartment that costs less than the house she used to lease. She says she loves her job and feels that she’s good at it, but she’s still rent-burdened and doesn’t have much emergency savings. Read our earlier story on Shirley Martin.

The Communities Foundation of Texas is a financial supporter of KERA.