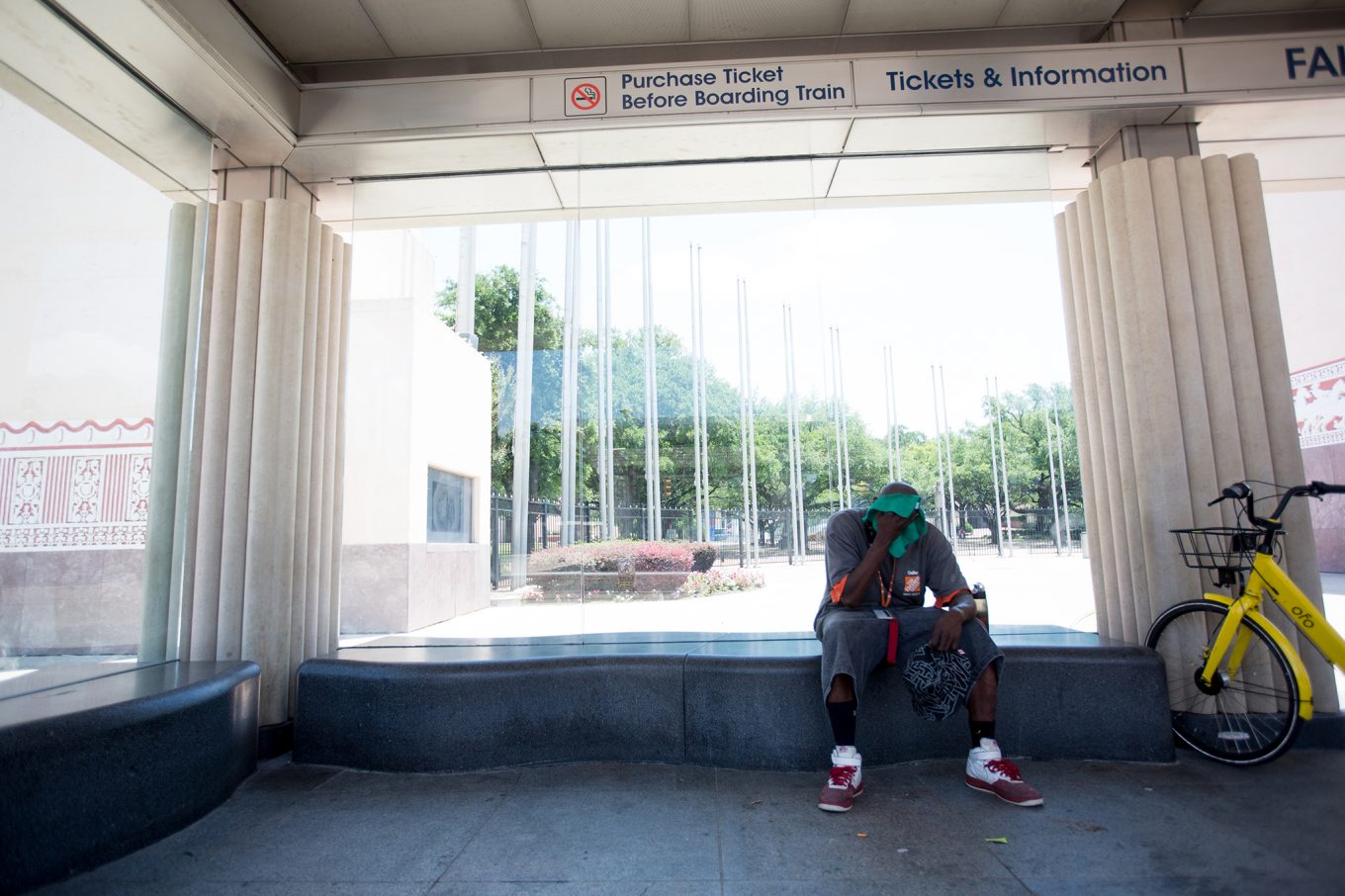 Chris Crowley, 39, takes a break from walking to the DART station from his home in Dallas, Texas. Photo: Allison V. Smith
The KERA Radio story

Life hasn’t changed much since we visited Jubilee Park three years ago. It’s a neighborhood on the financial edge, in the shadow of Interstate 30 in Old East Dallas. Chris Crowley was born and raised there. He’s got a better job now, but he’s spending 24 hours a week commuting.

The summertime walk from Chris Crowley’s house to the Dallas Area Rapid Transit station is brutal.

While it’s only nine-tenths of a mile, there’s hardly any shade. The sidewalk trails off, forcing him to crisscross the street.

“I just keep on trucking along,” he said.

Crowley, 39, doesn’t have a car. So he has to make this walk anytime he wants to go anywhere, including his job at a Home Depot Distribution Center in southwest Dallas.

If he had a car, his commute to work would be about 20 minutes.

Instead, it takes him about three hours to get to work each day, each way.

Here’s how Crowley does it: He walks to the Fair Park DART station, where he boards a train to the Pearl/Arts District station. There, he boards his second train, which takes him to the Westmoreland station. Then, he walks to a bus stop. He hops on a bus, which takes him near Interstate 20. Then he stops and waits for another bus. He rides the new bus to a stop south of I-20 and Hampton Road, where he gets off. Finally, he walks almost a mile to his job.

Crowley works overnights. His shift ends at 3 in the morning. Then he makes the long journey home.

His commute cuts into his sleep — or his ability to do much else. During the work week, he maxes out at four hours of sleep a day. (That’s two hours less than his daily commute.)

That’s one of his short-term goals: to save enough to buy a car outright, with no monthly payment.

“I’m making pretty good money now so, you know, a car note isn’t much of a problem, but I just never wanted to go there,” he said. “I always wanted to buy me a car, not have to worry about spending extra money for the car note. That way that money can go in my pocket for something else, you know?”

The DART commute isn’t costing Crowley a boatload of money. In fact, a Texas Workforce Commission program pays half his fare each month.

What it really costs him is time.

Deviney says many good-paying jobs are clustered far from public transportation. That’s a big hurdle to jump for people who don’t own cars.

“For people who are living in places that are cost effective to rent, they may have to travel a really long way to get the job that actually pays a little bit of a better wage,” Deviney said.

Which is what Chris Crowley’s faces. He shares a rental house with his parents in Jubilee Park. It’s affordable, and it’s home. He’d rather face the commute than look for something close by. He sees potential in this job.

“Right now, I’m moving merchandise around, and unloading trucks,” Crowley said. “But you can move up easily to a manager or an assistant manager position. And I’ve seen the dudes that are doing that, and they’ve been there for 10, 15, 20 years, walking around with nice slacks and penny loafers on.”

Crowley says he can see this company being the one he sticks with for the rest of his working days. Back in 2015, he worked only on a cash basis. He didn’t trust the banking system. Now, though, he’s paid on a debit card.

Crowley’s definitely better off than just a few years ago. He’s making more money with a company he believes in. But he spends 24 hours each week on the train and the bus, and after kicking in for rent, bills and paying child support, saving is tough.

“It’s difficult, but hey, it’s life, you know? We either deal with it, or we don’t,” Crowley said. “I’m dealing with it the best way I can, and that’s to keep going forward and keep staying positive.”

And that’s what he holds onto as he jams a hat on his head, grabs a jug of iced sweet tea and walks down Caldwell Street — just a few steps into that three-hour commute.

Sometimes living in an area with affordable housing means commuting long distances to a job that pays a better wage.
Tweet this takeaway

We first met Chris Crowley in 2015 while reporting our series, “Inside A Neighborhood,” about the Jubilee Park community in Old East Dallas. Read his story here.

In Dallas, 'The Rich Get Richer And The Poor Get Poorer' Rings True