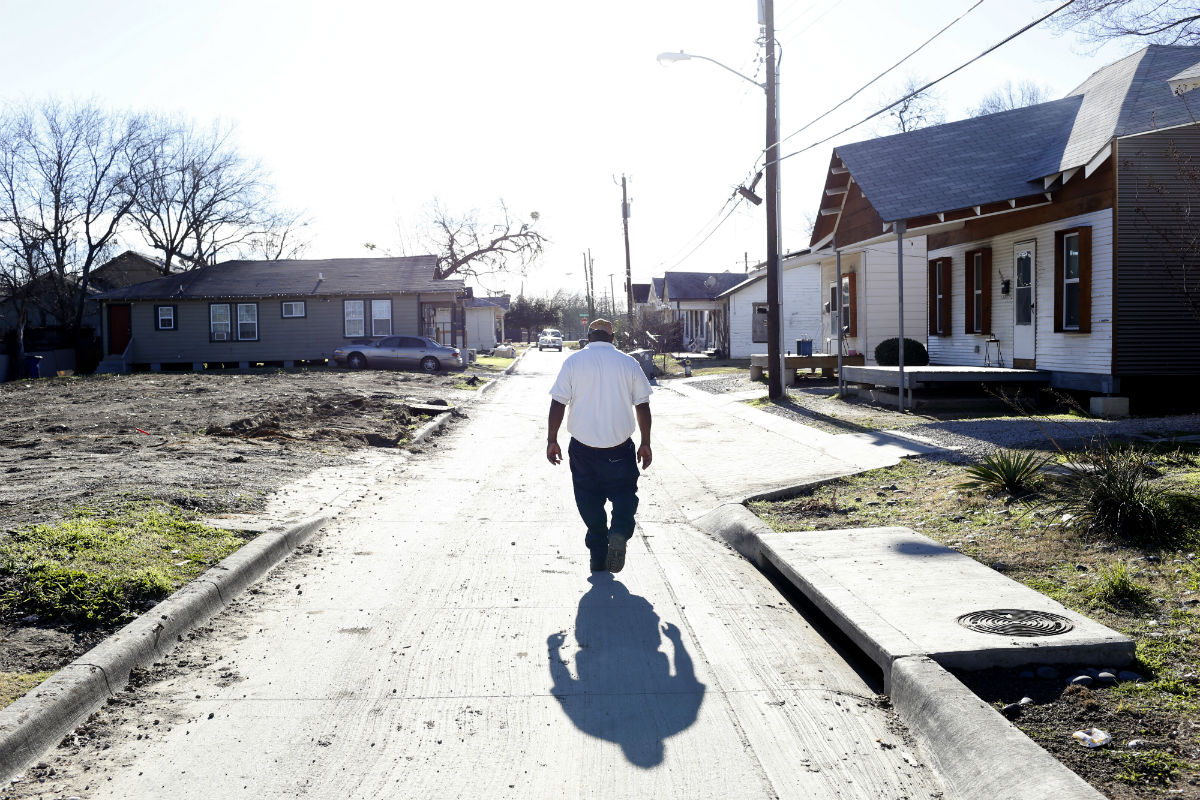 There’s a lot of good happening in Jubilee Park, including a sparkling community center and a dramatic drop in crime. But life here in the shadows of Fair Park is anything but easy. The unemployment rate is twice the state average. In parts of the community, the median income is just $16,000. In Jubilee Park, even a bank account is hard to find.

Sometimes, the story of a neighborhood comes into focus on a single city block.

It’s a short street — just a block long — and it’s the heart of a place called Jubilee Park.

When the weather’s nice and the sun’s out, folks flock to their porches. Half a dozen homes have been renovated and retrofitted and are as neat as pins.

Down the block, though, Congo Street is pockmarked with old, weathered houses, a vacant lot and a few beat-up cars.

It’s a street in transition, much like the neighborhood, sandwiched between Interstate 30 and Fair Park. 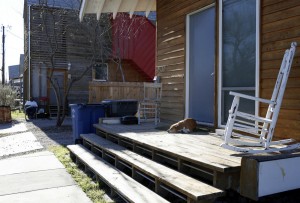 Lifelong residents of Jubilee Park are grateful for what’s already changed, especially the drop in crime.

Quincy Williams, 43, has lived in the neighborhood since he was a boy. The place has changed for the better, he says.

“You can walk around,” he said. “Ten years ago … you couldn’t do that, without getting mugged. You can exercise, walk your dog. Your kids could be outside playing and you don’t have to worry about drive-by [shootings] or anything like that. It’s good.”

But bring up finances or banks? Be prepared for skepticism.

Chris Crowley is 35 and has a steady job at Target, but no bank account.

“I’m just not trusting of banks, you know?” he says. “Electronically, things go wrong. I know if I get my check … it’s mine. It ain’t going to get lost; a hacker ain’t going to get it. Ain’t no misplacing or I need a code to get my money.”

On payday, Crowley forks over one dollar of every hundred he makes to cash his check. To him, it’s worth it.

“You read about everyday some bank is losing information,” Crowley says. “And I got bills to pay and I ain’t got time to tell the light company, ‘Hey, I can’t pay y’all right now because there was a glitch and my money’s lost.’” 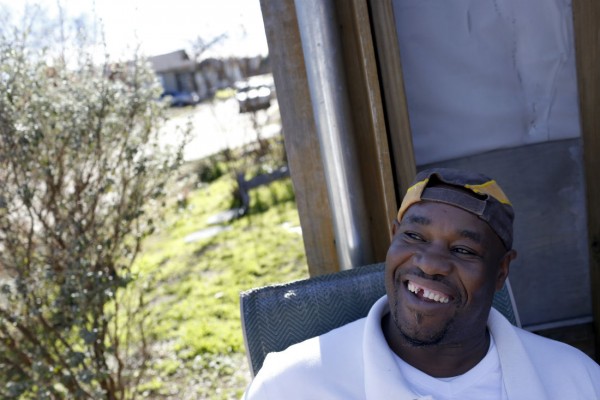 Quincy Williams says he wants the freedom to pay his bills on his own terms. “I can bank my own,” he says. Photo/Lara Solt

Banking’s OK, but banking’s not for me.
Quincy Williams, a Jubilee Park resident

Ella Garrett has lived in the neighborhood since 1977 — before the place was called Jubilee Park. She heats water with a fire to save on her electric bill. In this video, she talks about how Jubilee has changed — and how she’s saving for retirement.

In Texas, many skip the bank

The word “unbanked” sounds like it was dreamed up in a think tank, or maybe used for the first time in an economic position paper. It sounds academic and faraway. It’s not. 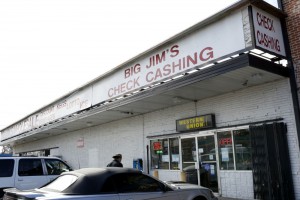 Several check-cashing stores are located near Jubilee Park in Dallas. Many Jubilee residents rely on these types of stores because they don’t have bank accounts. Photo/Lara Solt

About 13 percent of Texans are unbanked, according to the Corporation for Enterprise Development. That means no checking account, no savings account, nothing.

“It’s a challenge. And in Dallas we’ve got some big issues too,” said Susan Hoff with the United Way of Metropolitan Dallas. “I think in the city of Dallas it’s almost 15.6 percent of people are unbanked and then another 26 percent underbanked.”

Being underbanked means you have an account, but you still rely on places like payday lenders or shop at rent-to-own stores.

In other words: Two of every five North Texans either don’t have banks or are underbanked.

“That’s a lot of folks who don’t have access to direct deposit,” Hoff says, “or the ability to write a check, to pay utility bills or rent or be able to get cash easily.”

There’s an even bleaker statistic about full-time workers over the course of a lifetime.

“Those without a bank account can spend $40,000 just to cash their paychecks,” says Laura Rosen with the Center for Public Policy Priorities, an Austin-based non-profit.

Rosen says most people who go without a bank account also buy money orders every month. Some pay fees to put money on pre-paid cards.

In Jubilee Park, that includes people like 63-year-old Roger Payne. 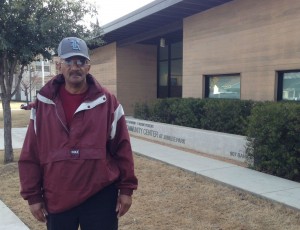 “I don’t have no problem with banks, I just don’t have the money to put there,” Payne says.

Payne works 18 hours a week, through a program run by the AARP. He cleans and organizes at a Dallas community center. He also gets a small, monthly social security payment.

Williams, the Jubilee resident who’s lived in the neighborhood since he was a boy, works as a cook at a downtown restaurant. He doesn’t have a bank account. He says he wants the freedom to pay his bills on his own terms.

“I can bank my own,” he says. “If you have a bank account and you pay a bill then you’ve got the bank paying a bill you might not want to pay that bill for the full amount they’re going to pay it anyway. If you’re paying your own bills, you can pretty much say I’m going to pay this much and then I’ll catch back on up the next time.”

He cashes his paychecks, paying a fee each time. He uses money orders to pay his bills.

The fees add up, but he doesn’t keep track of how much he spends in fees.

“Banking’s OK, but banking’s not for me,” he said. 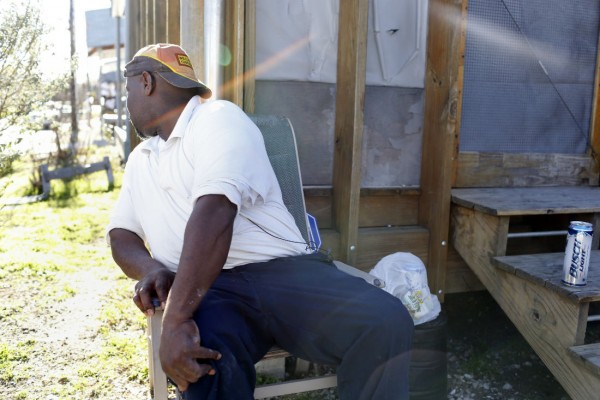 Quincy Williams relaxes in Jubilee Park, which he says has changed for the better. “You can walk around,” he said. “Ten years ago … you couldn’t do that, without getting mugged.” Photo/Lara Solt

Those without a bank account can spend $40,000 just to cash their paychecks.
Laura Rosen with Center for Public Policy Priorities

Being unbanked comes with deep costs. Without an account, it’s hard to save money and even harder to build credit.

Some people choose not to have a bank account, and some couldn’t open one if they wanted to. 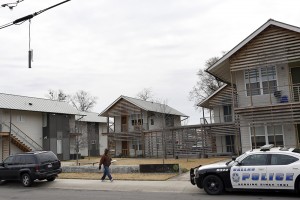 Rosen with the Center for Public Policy Priorities says a bad banking history is hard to re-write.

“Let’s say you had insufficient funds and then you’re put into a system called a check system, which a lot of banks will not allow you to open an account if you’re in that system for a while,” Rosen says.

That’s where organizations like the United Way come in. It backs a program called Bank On in Dallas, Denton and other cities across the country. The program works with local banks and credit unions, encouraging them to take on potentially risky customers. The Bank On program educates those customers, too.

“Whether that’s financial literacy training, connecting them with a financial coach, really educating them on the benefits of banking and how they would actually go about getting connected to a bank,” Hoff says.

And when it comes to the trek out of poverty, that’s an important step. The average person without a bank account spends $1,000 a year on fees.

That’s a lot of money for most people. For folks struggling to get by, that’s a fortune.

Still, for someone living paycheck to paycheck in Jubilee Park, like Crowley, that money buys peace of mind.

It’s a philosophy that doesn’t come cheap, but it’s one many of his neighbors share.

Throughout 2015, as part of KERA’s One Crisis Away initiative, Think on KERA 90.1 FM explored issues related to poverty and financial literacy.

Poverty And The Brain: Growing up in poverty can negatively affect the wiring and even the physical dimensions of a child’s brain. We talked about how interventions during the middle school years can reverse those changes with Dr. Jacquelyn Gamino, director of UT-Dallas’ Center for Brain Health’s Adolescent Reasoning Initiative and assistant research professor in the School of Behavioral and Brain Sciences. Listen to the conversation.

What It’s Like To Be Poor: Members of America’s middle and upper classes have preconceived notions about what it means to be poor. We talked about what going without is really like with Linda Tirado, who’s bounced back and forth between middle class and being poor. She writes about her experiences in Hand to Mouth: Living in Bootstrap America. Listen to the conversation.

Dissecting The Earned Income Tax Credit: When a poor person gets a low-wage job, that employment also brings in additional money in the form of the earned income tax credit and other refunds. We talked about why even with that extra income, it’s still tough for low-earners to get by with University of Wisconsin assistant professor Sarah Halpern-Meekin. She’s part of a team of researchers that explores the topic in the book It’s Not Like I’m Poor: How Working Families Make Ends Meet in a Post-Welfare World. Listen to the conversation.

A Place Called Jubilee:The cost of living poor can be staggering: Racking up interest on a payday loan, working for minimum wage, paying fees to cash a check, and eating healthy when groceries are hard to find. We talked with KERA’s Courtney Collins, who reported the One Crisis Away series, and Ben Leal, CEO of Jubilee Park Community Center. Listen to the conversation.