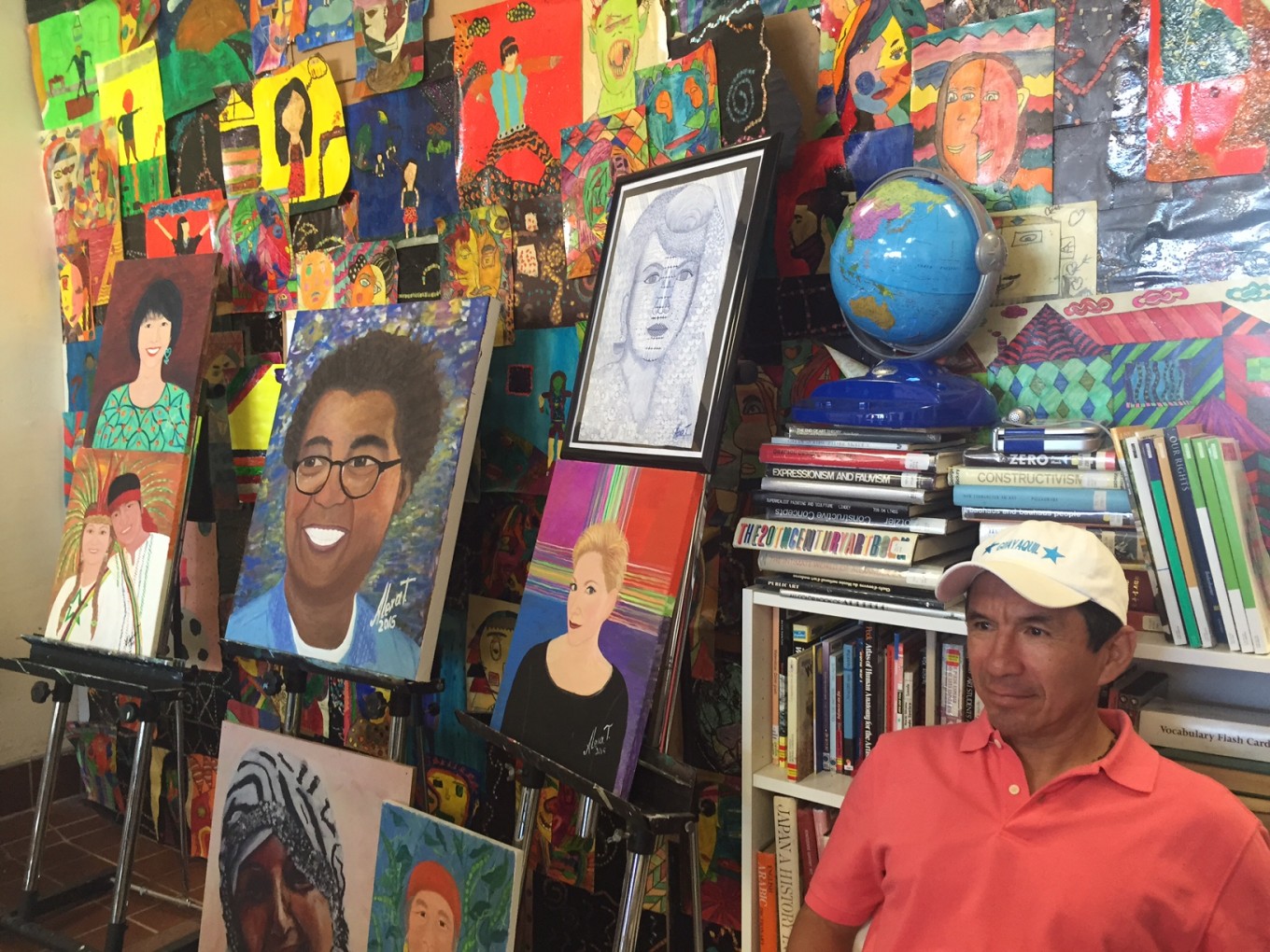 Art on display in Vickery Meadow, which was placed in the international spotlight last fall. Photo/Stella M. Chávez
The KERA Radio story

A year ago, reporters and photographers were camped outside the Ivy Apartments in Northeast Dallas. That’s where Thomas Eric Duncan, a Liberian national, was staying before he was diagnosed with Ebola.

The apartment complex is in Vickery Meadow, a diverse neighborhood that’s home to thousands of immigrants from around the world.

The Ivy Apartments is a much quieter place these days. On a recent afternoon, kids ride their bikes and play in the parking lot of the apartment complex.

The second-story apartment where Thomas Eric Duncan visited his fiancée last year is empty. Neighbors say it hasn’t been rented out since.

For them, life has moved on. 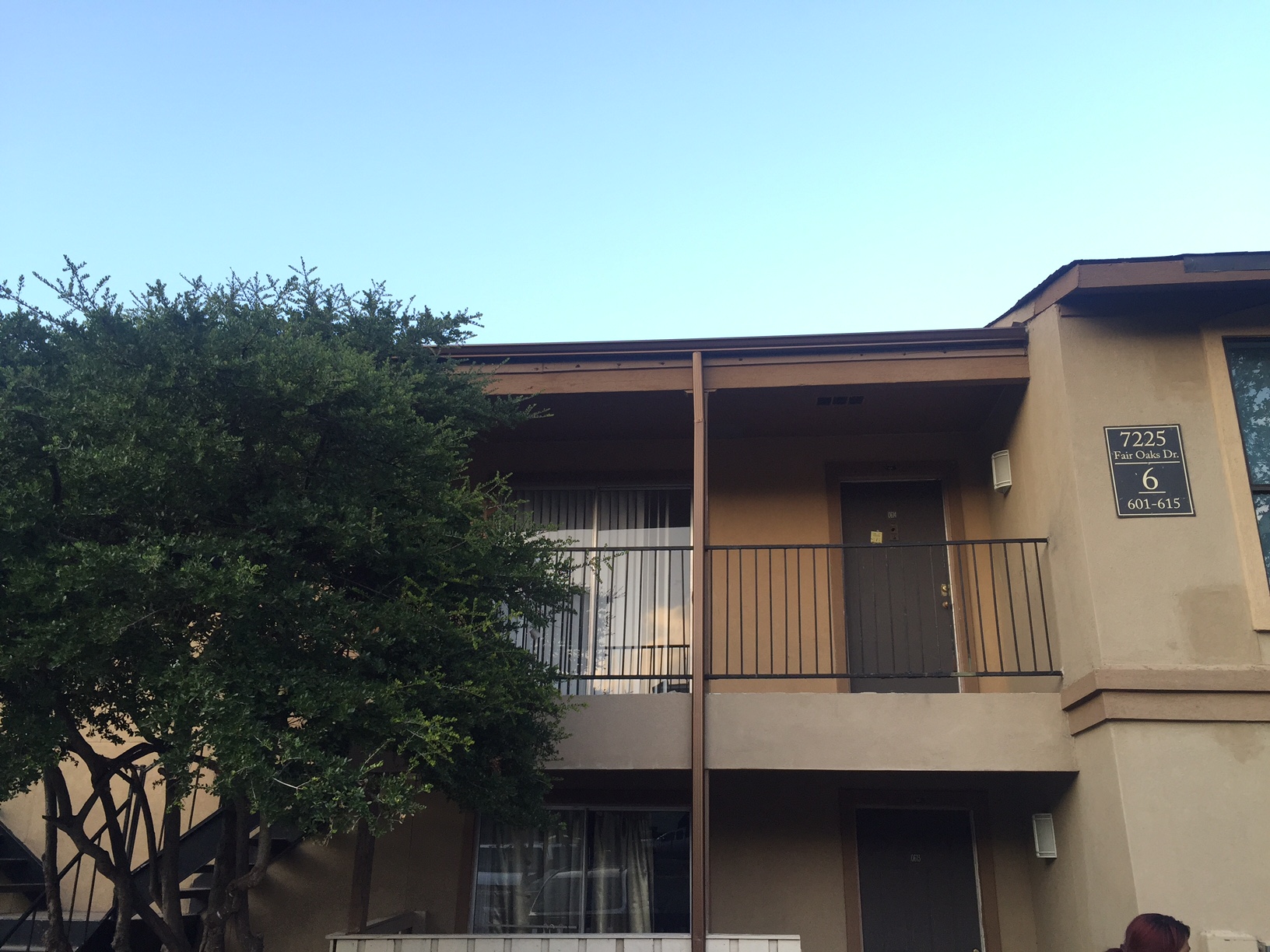 The kids, on the other hand, have picked it up pretty quickly. Like 15-year-old Ehkaw Thaw, who helps interpret for her mom, Paneh Yin. They’re walking through the complex. They came from Thailand six years ago. Ehkaw says her mom was pretty strict last September when news of Ebola broke.

“Like she found out about Ebola and how it killed people. Like we weren’t allowed to go out and play anymore,” Thaw said. “We had to stay home after coming back from school the whole time. It was like getting grounded.”

“It wasn’t like Ebola was invented in Vickery Meadow. … People bring it up, but I gotta tell you that things are moving forward really fast here, so I don’t really think it’s an issue.”
Barry Annino, Vickery Meadow Public Improvement District 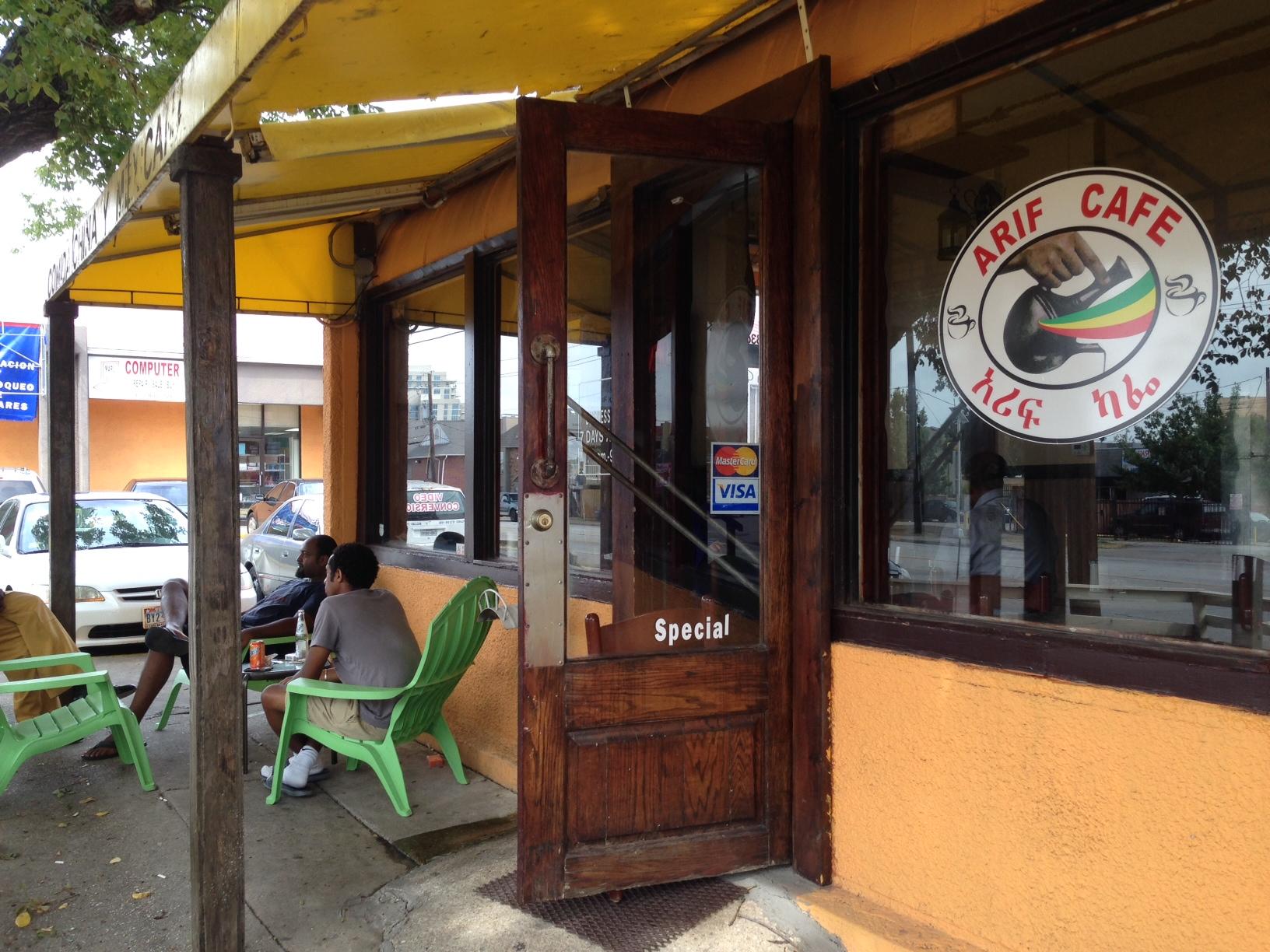 Arif Cafe in Vickery Meadow in Dallas is a popular restaurant for many African immigrants in the neighborhood.
Photo/Stella M. Chávez

Ebola’s immediate impact on the neighborhood was the lack of information residents received and misinformation bouncing around, said Daley Ryan, who works with the International Rescue Committee, which helps resettle refugees in the area. 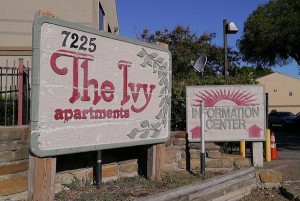 “The neighborhood itself felt like sometimes they were the last to know what was going on and they were getting updates a little behind everyone else and I think they felt a little bit isolated by that,” Ryan said.

Things were hectic for Ryan’s nonprofit. The group translated material into several languages and sent out interpreters.

On any given day in Vickery Meadow, you can hear Burmese, Karen and Chin – the languages spoken in Burma. There’s also Arabic, Farsi, Urdu, French, Spanish, Vietnamese, Swahili – more than two dozen in all.

“I think that it was definitely a challenging time for the community,” Ryan said. “But I also think that it became an opportunity for Vickery Meadow to represent themselves and to really let people know that this is more than just a collection of apartment buildings.”

Down the street from those apartments is a mix of convenience stores, beauty shops, restaurants and other small businesses. 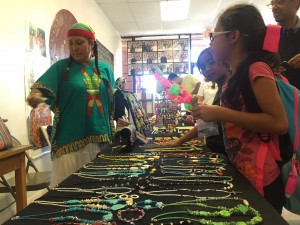 At Arif Cafe, 32-year-old Adane Gebri chowed down on a Ethiopian dish of beef, tomatoes, onions and garlic. He was catching up on the latest news on television about other migrants in Europe.

Gebri came here seven years ago after winning a spot through the U.S. diversity visa lottery. Last year was surreal, he said.

“I was in shock because I have the information back there in Africa, so I know the Ebola outbreak was there,” he said. “So when they came there, we got a lot of media attention and a lot of coverage.”

But Gebri and others say they don’t think many people necessarily changed their daily routines. They still had to shop and eat. 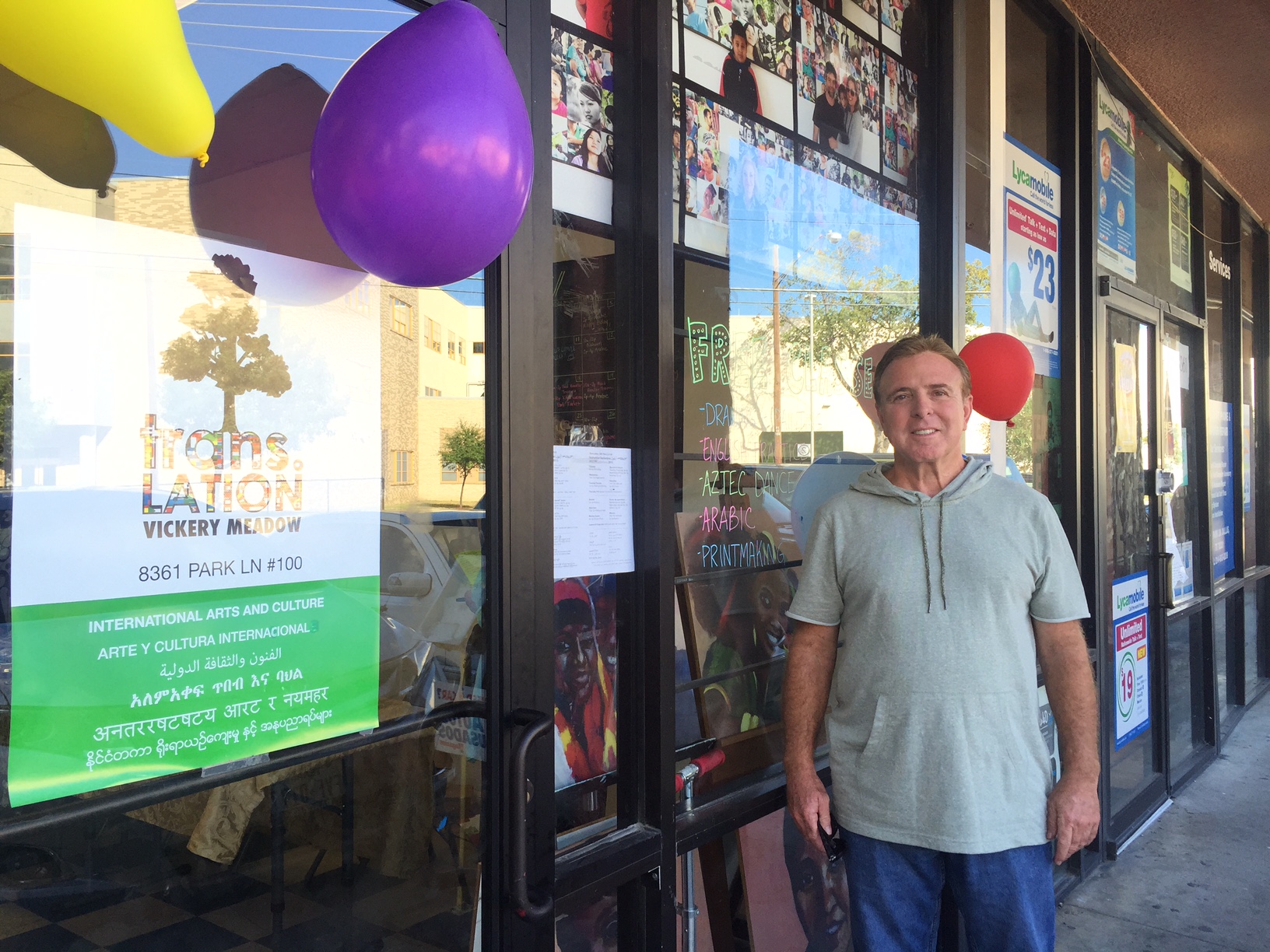 What’s next for Vickery Meadow 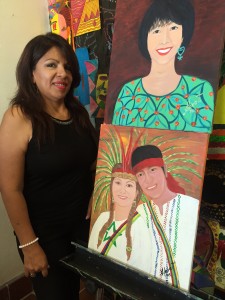 Alexandra Tomalá says Trans.lation has given her an opportunity to do what she loves – make art and teach painting classes to Vickery Meadow residents. Photo/Stella M. Chávez

Alexandra Tomalá moved to Dallas from Ecuador two years ago. She moved to Vickery Meadow last November and says she didn’t know it was the neighborhood where Thomas Eric Duncan lived before he was diagnosed with Ebola. Tomalá says Trans.lation has given her an opportunity to do what she loves – making art and teaching painting classes to residents of Vickery Meadow.

Barry Annino, executive director of the Vickery Meadow Public Improvement District, wants to make even more changes that will help the neighborhood.

“Look at all the diversity,” he said. “It wasn’t like Ebola was invented in Vickery Meadow. It’s just a reflection of what we have here. … People bring it up, but I gotta tell you that things are moving forward really fast here, so I don’t really think it’s an issue.”

“I think that it was definitely a challenging time for the community, but I also think that it became an opportunity for Vickery Meadow to represent themselves and to really let people know that this is more than just a collection of apartment buildings.”
Daley Ryan, International Rescue Committee

'I Had No Idea I Would Be In Charge,' Dallas County Judge Says