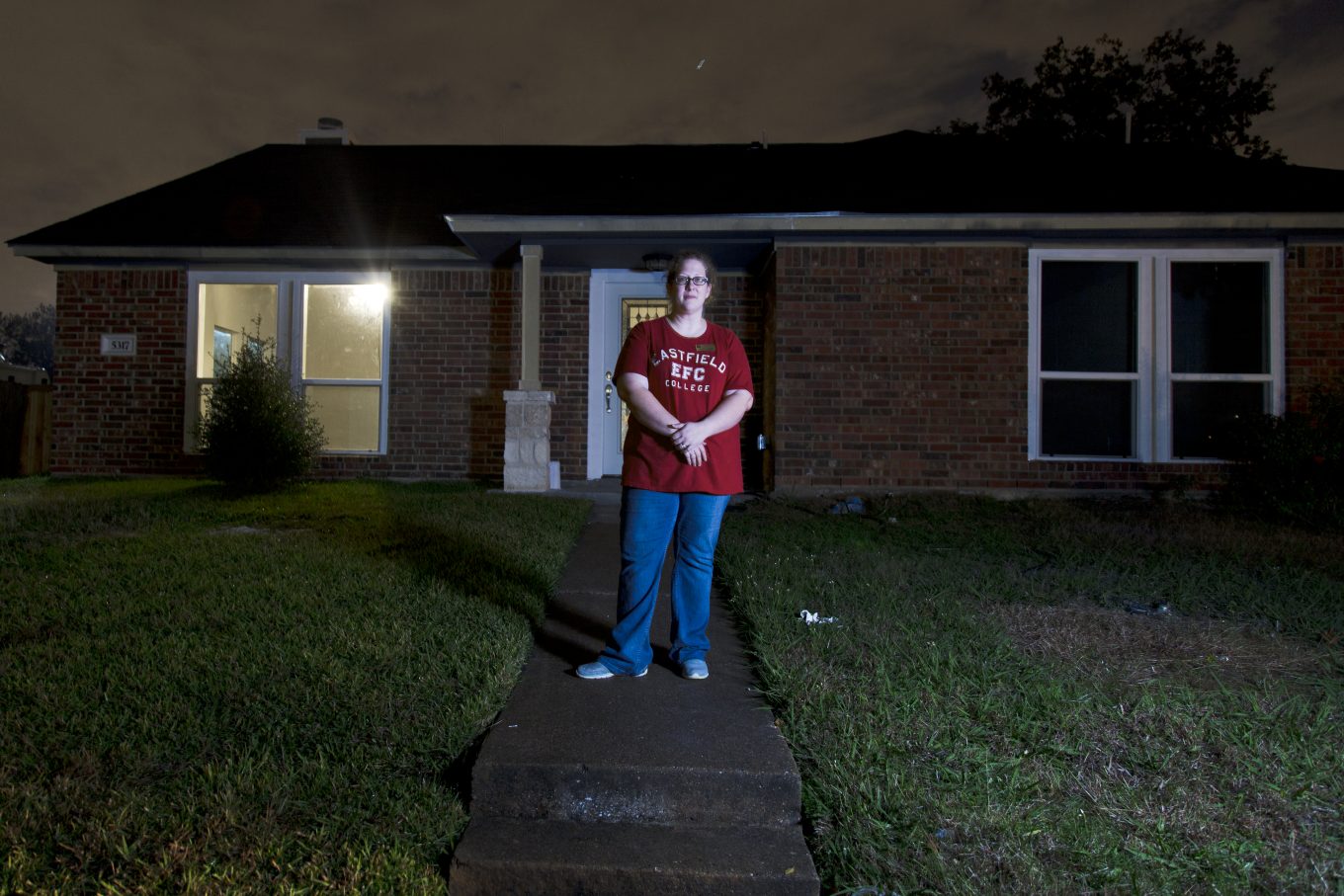 After A Tough Year, Family Celebrates: ‘We’re All Still Here’

Jessica Cadick, her fiancé and their three kids were in a bad place after last December’s tornadoes. Their rental home was ripped apart and they didn’t have insurance. A lot of what they lost was gone for good. It’s been a tough year for the family financially. They’re still fighting to stay afloat.

Even though the storm tore a gaping hole in her Garland rental house, Jessica Cadick says for some reason, she still used the front door when she walked in to survey the damage.

“This whole wall was gone,” she said. “This was destroyed by the tornado — from that corner to here was ripped out, windows and everything.”

Construction on this house started fast. It was one of the first on the block to undergo repairs.

“When we originally discussed all of this it was projected it would take six weeks,” she said.

Progress slowed during the spring and never sped back up.

A few weeks ago, the walls were up, the roof was repaired, but Cadick’s voice echoed through the still empty house.

“The entire process from the night of the tornado itself … all I’ve said is ‘I want to go home,'” she said.

Even though it’s a rental house, the place means a lot to Cadick. She grew up in the neighborhood and spent a lot of time with the family that lived here. This home has been a constant presence in her life.

“That is your safe place,” she said. “That is the place where you can go and kick off your shoes and no one judges you. The people that you love exist in that place, and it is your bubble.”

When the Dec. 26 tornado burst that bubble last year, cold reality pressed in. Cadick and her fiancé didn’t have renters insurance or full coverage on their truck that was smashed by the storm.

She’s a student and lab assistant at Eastfield College. They live paycheck to paycheck and their savings are thin.

“A lot of people that look from the outside in also have a tendency, I’ve noticed, to lay blame. ‘You should have had insurance.’ I’ve heard that several times,” Cadick said. “And my response to them a lot of the time is ‘You’re more than welcome to pay it for me. Because my choice is to feed the family.'”

Valencia Alexander works for the city of Dallas and helped with counseling efforts after the storm. She says this kind of pervasive money worry can take its toll. S

he says storm survivors are dealing with a lot of issues that can be overwhelming. Alexander says they’re looking at: “What am I going to have and what I can’t have and how am I going to pay this in the long run? Am I going to be in a lot more debt than I was in before which I hadn’t planned on being in?”

“That is your safe place. That is the place where you can go and kick off your shoes and no one judges you. The people that you love exist in that place, and it is your bubble.”

Cadick says things didn’t get easier after the storm.

The truck they bought with cash to replace the tornado-wrecked one was stolen and they hadn’t upgraded the insurance yet. Cadick’s fiancé was working as a contractor and needed the pick-up for jobs.

Those jobs dried up once the new truck was taken. It’s been tough.

“We’re playing the juggle game,” Cadick says. “We pay this bill this month, and hopefully they won’t turn things off and then we’ll pay that. Our water has been shut off a few times because we couldn’t pay the bill.” 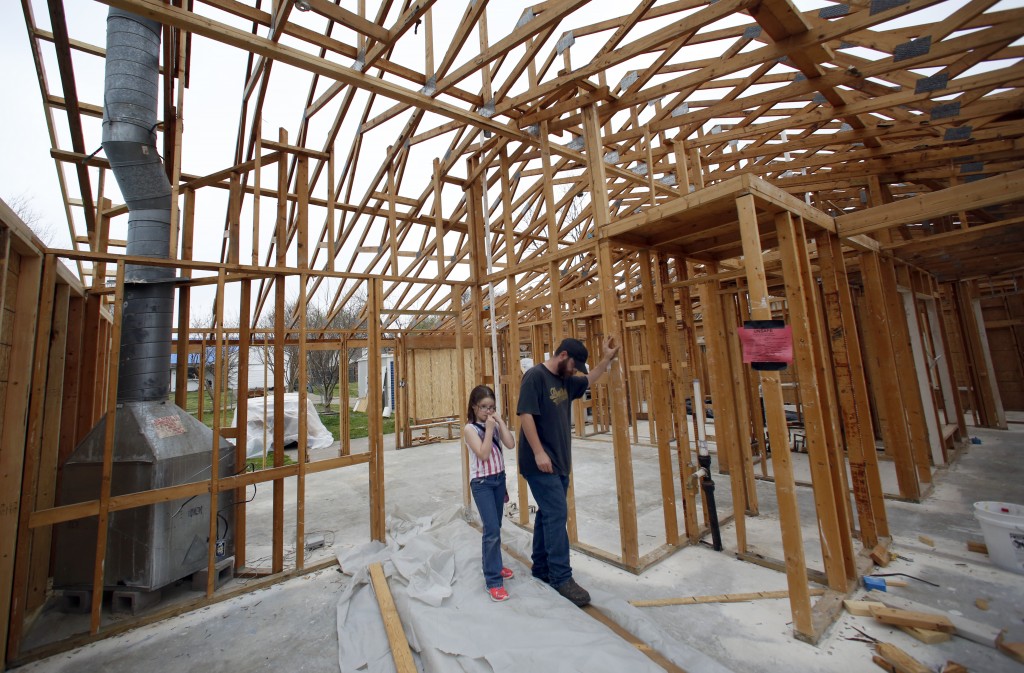 While he talked to KERA last spring, Cadick’s fiancé Charles Beck didn’t want to participate in an interview this time around. She says he’s just too down.

“He feels very responsible for the family’s well-being financially and otherwise and like I said, we’re struggling. And I think he carries most of that burden himself,” Cadick said. “I think it was just too much. He didn’t want to come back and have nothing good to say right now.” 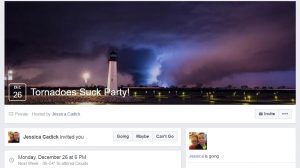 A screenshot from Facebook event for Jessica Cadick’s “Tornadoes Suck” party set for Dec. 26, the anniversary of the storms.

Cadick’s fiancé did land a warehouse job recently. It doesn’t pay much but it’s something. A little money — and a little boost to morale.

Another spot of good news? This family of five was able to move back into their rental house.

And Cadick says they’re not dreading Christmas or the anniversary of the storms.

“The owner who’s a close friend of mine will be in from England and he and I have already discussed it — on Dec. 26, we plan on throwing a party,” she said. “We’re going to celebrate the fact that we’re all still here.”

Still here, and still working to rebuild their lives, even a year later.

Bracing For The Storm's Anniversary After Months Of Strife

Be Prepared Before And After The Storm