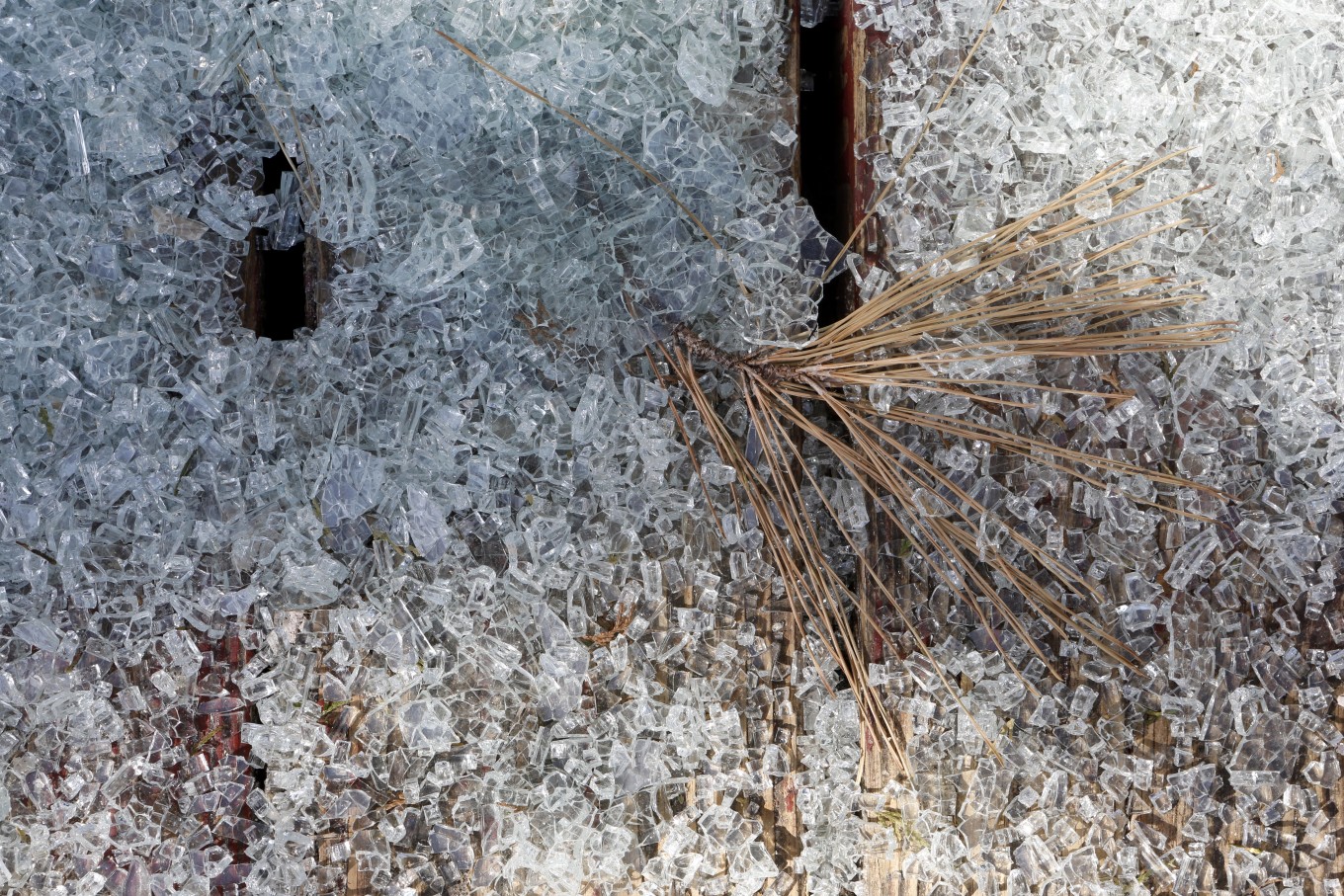 This isn't hail -- it's broken glass outside the Rowlett home of Lindsay Diaz. Photo/Lara Solt
The KERA Radio story

Even with insurance, storm-related expenses can pile up fast. Lindsay Diaz knows that firsthand. The Rowlett duplex she owned was blown apart on Dec. 26. She’s trying to juggle a full-time job, a baby, and the challenge of rebuilding her house and her life. The biggest problem? She’s underinsured.

Even a month after moving in, Lindsay Diaz isn’t completely settled into her rental house in Forney. Boxes fill the kitchen, and there’s some random furniture on the porch.

Eight-month-old Arian doesn’t seem to mind, leaping happily in a donated bouncy chair, while mom looks on with a grin.

She still can’t believe how close they came to disaster.

Diaz, her boyfriend and the baby were all home in Rowlett the night of the storm. When the weather reports turned serious, her boyfriend took her and Arian into the bathtub.

“All of the sudden, he said, ‘here it comes,’” Diaz recalls. “And, sure enough, 10 seconds later, it came roaring through the house.” 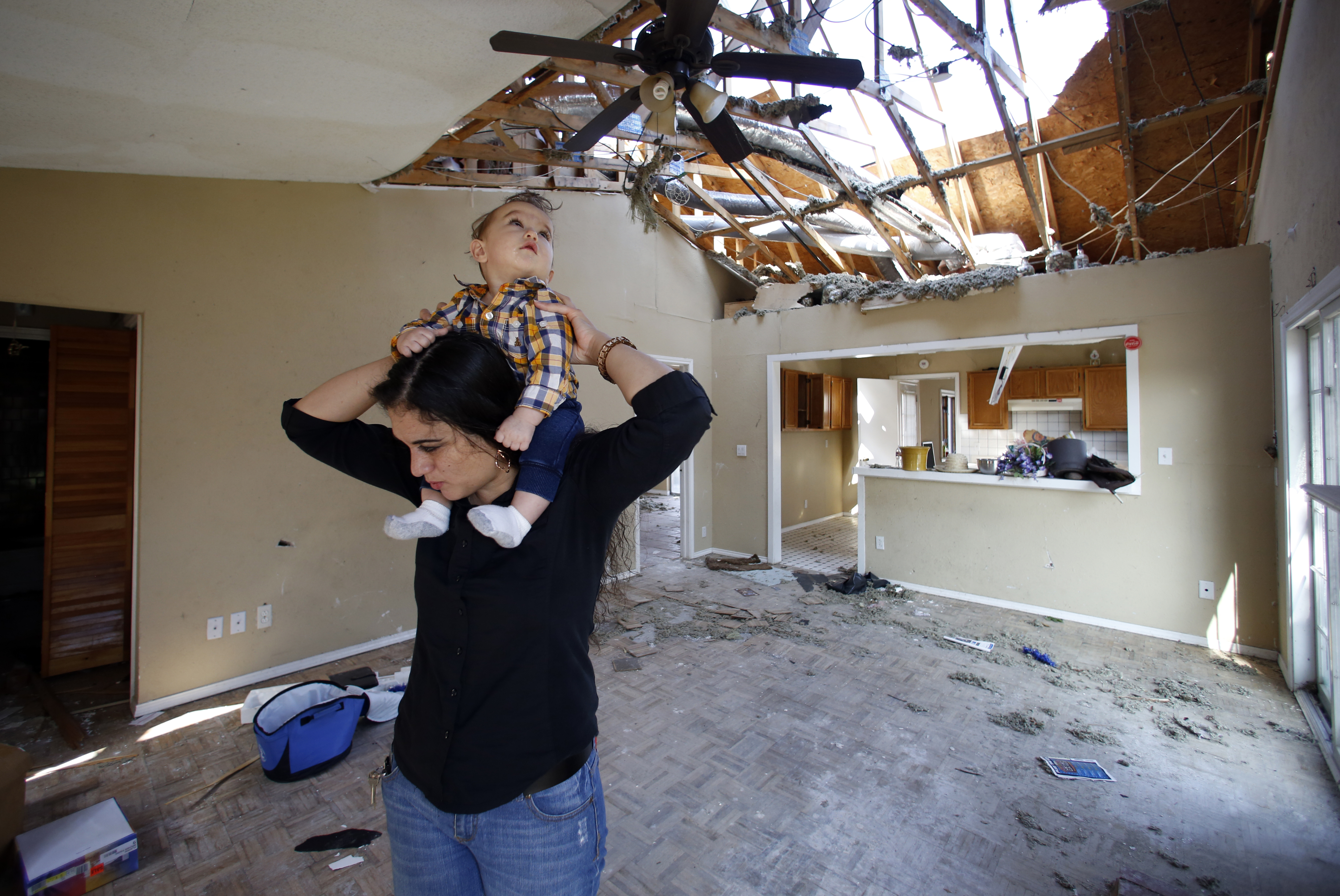 Lindsay Diaz and her son, 7-month-old Arian Krasniqi, in the living room of their Rowlett home. Photo/Lara Solt

“It didn’t fully hit me until a couple of weeks later. I just broke down.”

Diaz felt the tub lift off the ground and slam back down. For a moment, she thought she might get swept away.

“I remembered thinking ‘oh, my gosh; what am I going to do?” Diaz says. “Am I going to be able to hold the baby? Is the tornado going to take him from me? Is this going to hurt?’”

When the storm finally passed, Diaz saw what so many North Texans did the night after Christmas: a wrecked house full of broken furniture with holes in the walls and part of the roof peeled off.

Diaz was stunned, and she stayed that way.

“It didn’t fully hit me until a couple of weeks later,” she said. “I just broke down.” 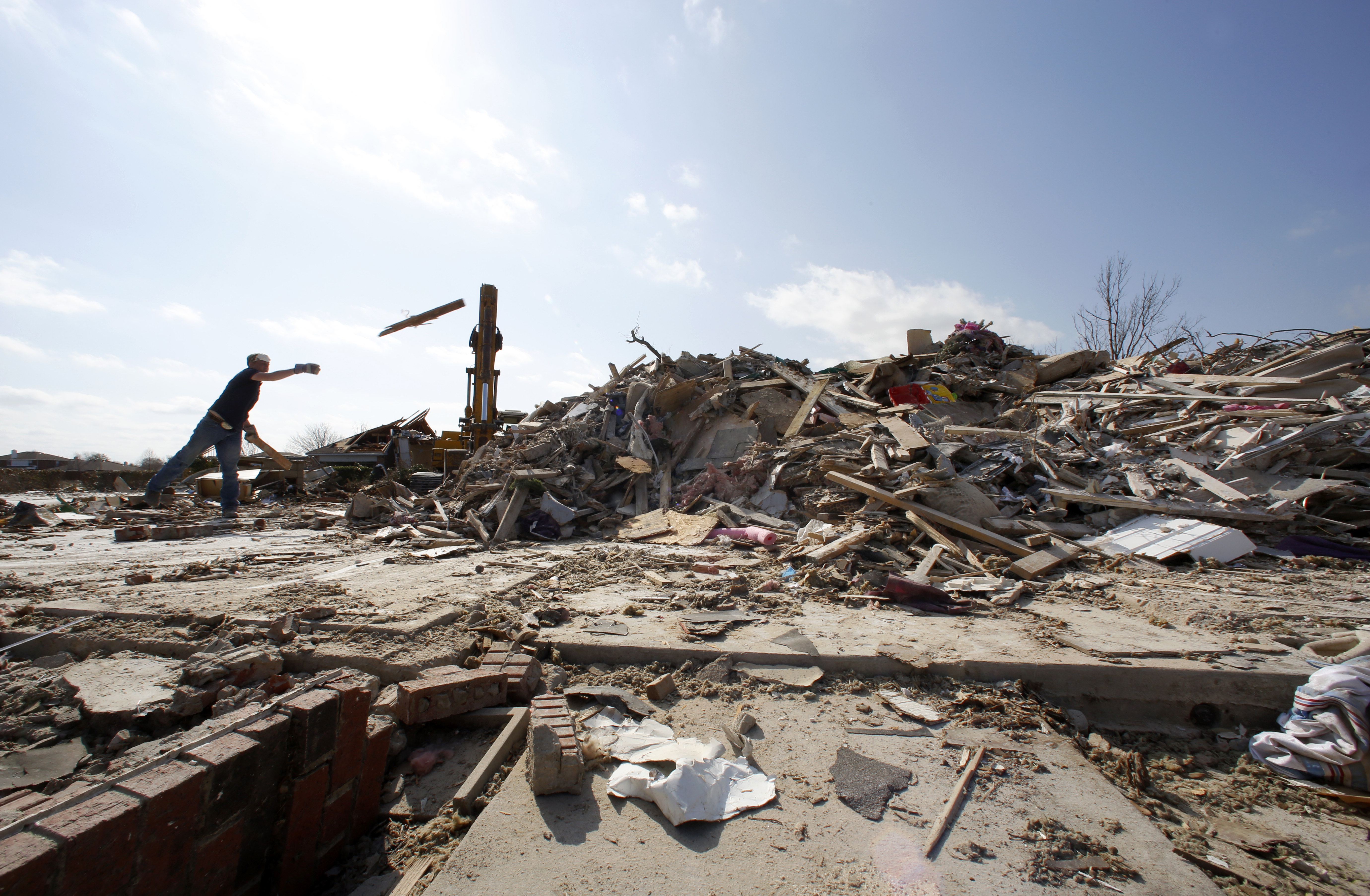 Michael Judd of C.M. Landers Construction and Demolition cleans up what is left of a house near the home of Lindsay Diaz, her boyfriend Arif, and their 7-month-old son, Arian, in Rowlett after the December tornadoes. Photo/Lara Solt

Now that she’s had time to get used to her new reality, Diaz isn’t numb anymore.

“That’s all I think about,” she says. “I don’t have a big savings account. I actually had to get into that while being out of my home.” 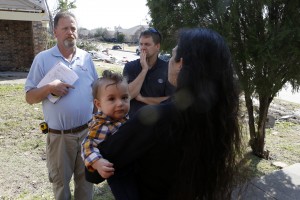 Lindsay Diaz holds her son, 7-month-old Arian Krasniqi, while speaking with Stephen Miller of Lone Star Remodeling, left, and Joel Weimer of The Next Project Company about how to rebuild. Photo/Lara Solt

Diaz owned her side of the duplex. She has homeowner’s insurance, but her reimbursement check won’t quite cover the repairs she’ll need to make.

“What should I do with the money I get from the insurance?” she asks. “Should I pay the mortgage? Should I use the rest of the money to repair, which is not going to be enough? I’m homeless. I don’t have a home and I need to figure out what I’m going to do to get it back.”

About 60 percent of American homeowners are underinsured by an average of 17 percent, according to the research firm CoreLogic.

Jerry Hagins, with the Texas Department of Insurance, said keeping your coverage up to date is the most important thing you can do.

“That’s why we recommend that folks review their policy at least once a year. That’s also a good time to review your home inventory to see if you need to add anything to it.”

That means making sure that your home’s value hasn’t spiked and that you haven’t filled your house with new things that might need replacing. Hagins said some large insurance companies automatically increase your premium each year to help you keep up. Most don’t.

“A lot of people will buy a policy when they buy their house, and then they forget about it, or they don’t look at it,” Hagins says. “Sometimes they don’t even know where their policy is inside their house.”

“We recommend that folks review their policy at least once a year. That’s also a good time to review your home inventory to see if you need to add anything to it.” 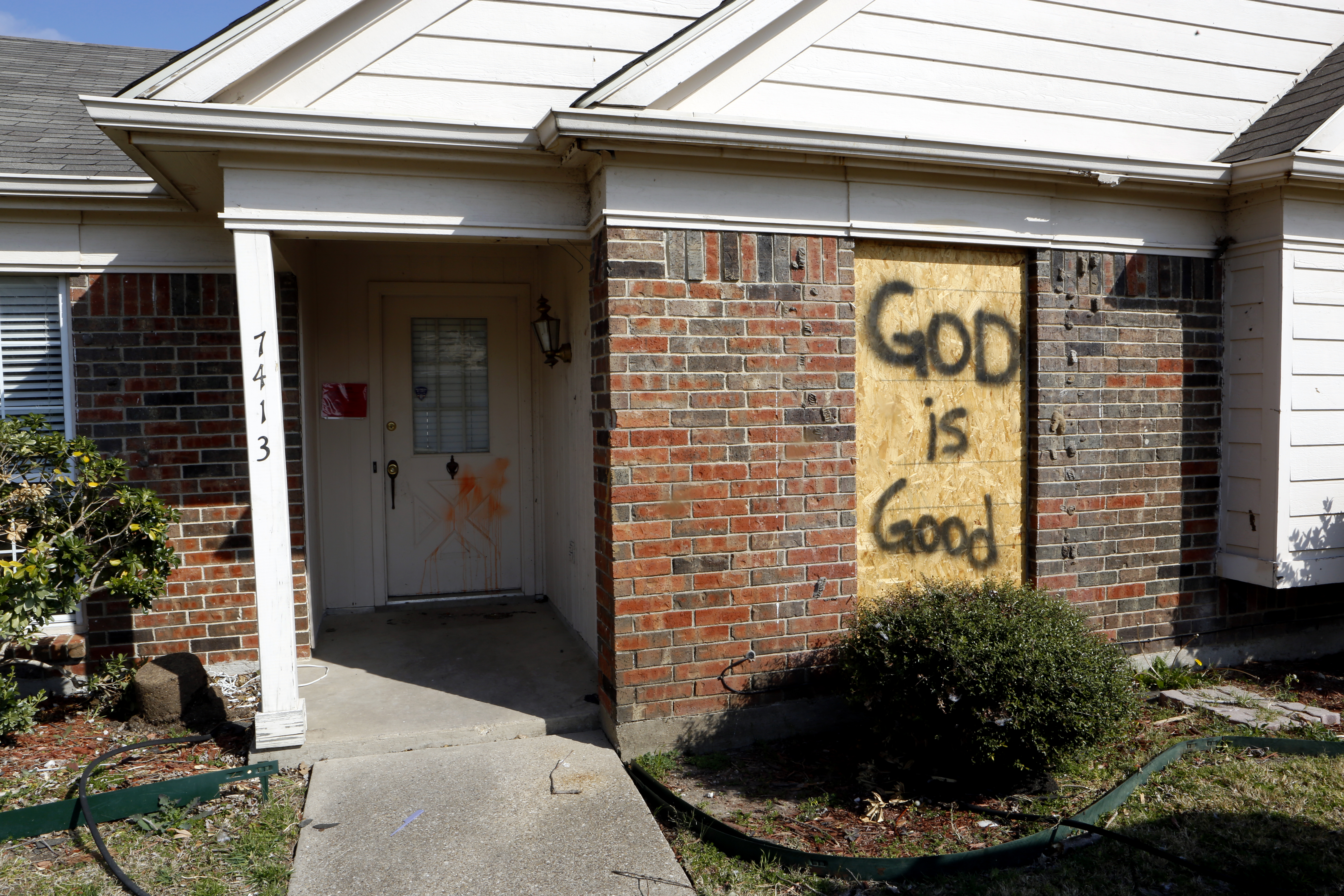 A damaged house near the home of Lindsay Diaz, her boyfriend Arif, and their 7-month-old son, Arian, in Rowlett after the December tornadoes. Photo/Lara Solt

For a list of important documents you need stored in a safe place during a storm, check out this checklist.

OUT OF HER POCKET

Problems aren’t limited to just inside a home. There can be problems in the driveway, too. Cars get crushed, and a lot people don’t pay the extra premiums for rental coverage.

“Ideally we would take insurance coverage for all the possible risks that are out there,” Hagins said. “But realistically we do have to make choices, so we can’t check off every single box.”

Diaz didn’t have coverage to pay for a rental car.  When the tornado smashed her Toyota RAV4, she spent more than $1,000 on a loaner.

Diaz spends most of each day thinking about what comes out of her pocket. Since she hasn’t finalized a plan for her wrecked home, Diaz tries to save where she can. She is bringing lunch to work. She’s cutting down on childcare, splitting duties with her boyfriend and sister instead of a paid sitter. 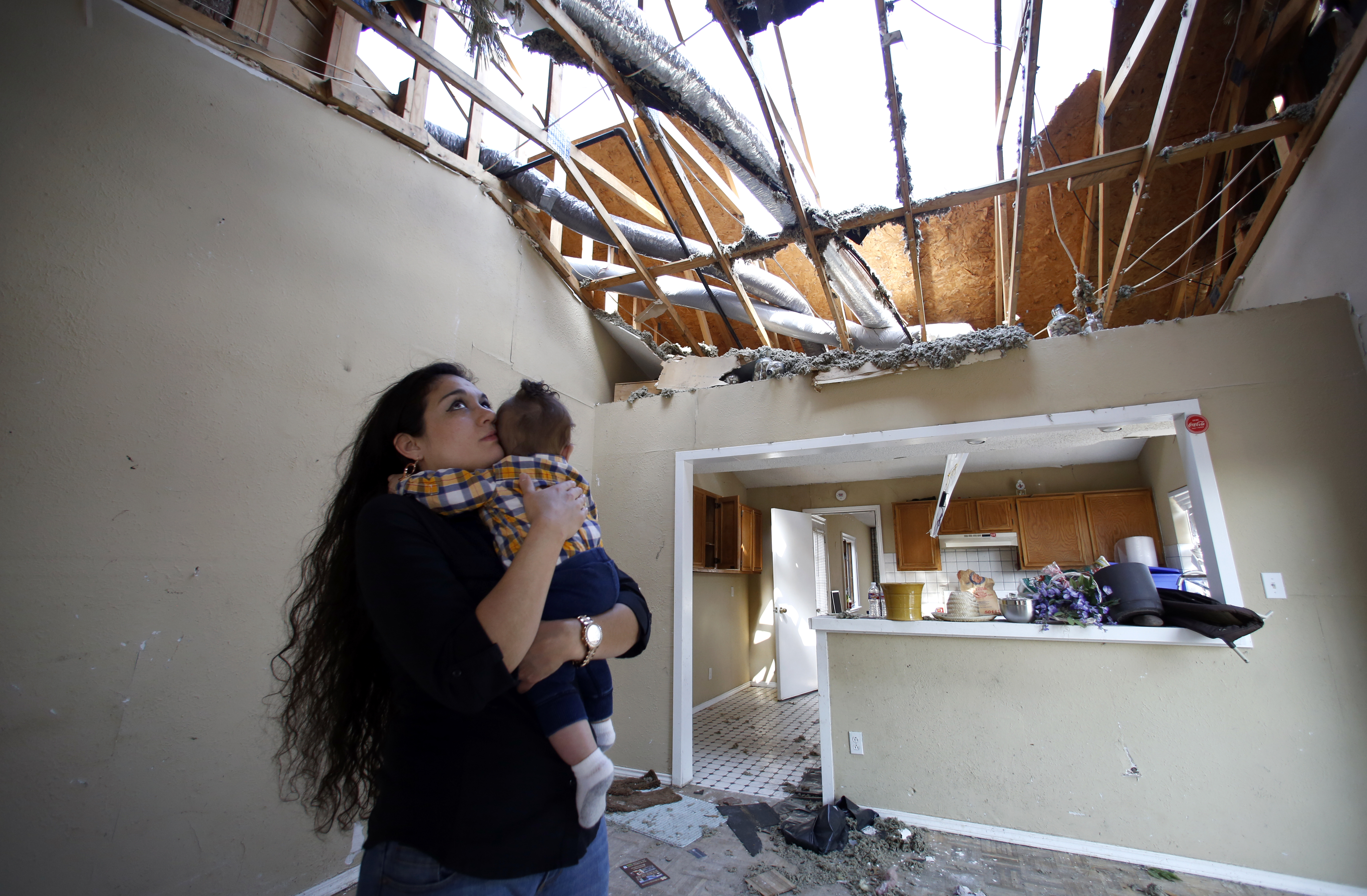 Lindsay Diaz and her son, 7-month-old Arian Krasniqi, in the living room of their Rowlett home where they hunkered down in the bathtub for safety during the December tornadoes. Photo/Lara Solt

For now, insurance covers her rent while she keeps paying her mortgage. Sometime this summer, the insurance money will run out.

This whole process has been hard.

Hugging her baby in the bathtub while a storm ripped through.

Seeing her wrecked duplex when the sun came up the day after the tornado hit.

Living in a hotel for a month, then finding a rental house.

And, of course, the nagging worry that she might run out of money, despite having insurance and a full-time job.

“What if the price exceeds what they’re telling me?” Diaz asks. “I don’t have that money and then I have to scramble, and, this will be in the future of course, I’ll have to scramble around to try to get a loan and find money somewhere.”

Let’s face it: Even if a home is insured for double its value, you’re never really ready when a storm upends your life.