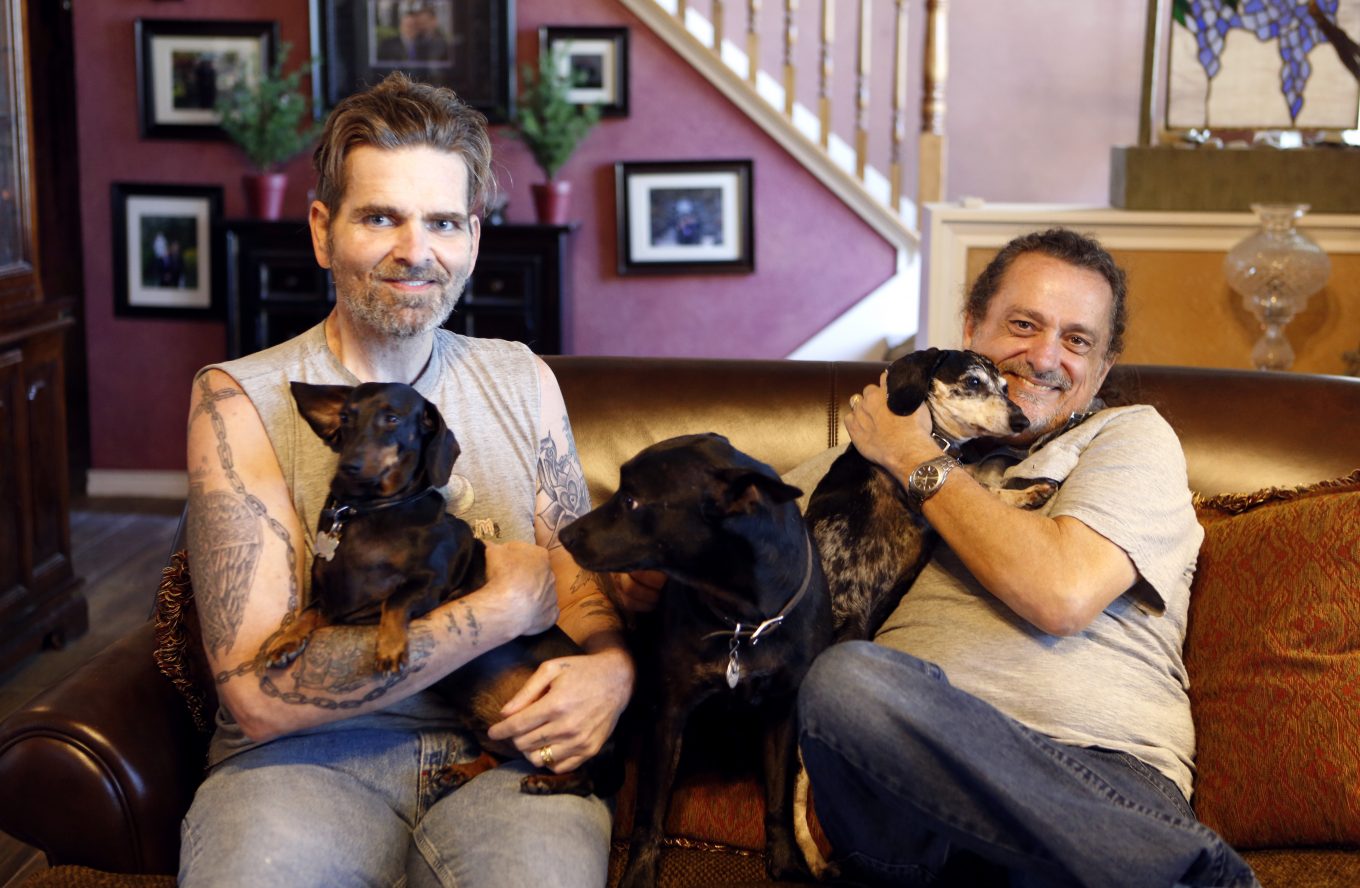 From left: Alfredo and Anthony Fowler-Rainone have moved back into their home (with their dogs) in Rowlett. Photo/Lara Solt
The KERA Radio story

It took 10 long months to put Alfredo and Anthony Fowler-Rainone’s home back together. They waited out the construction in a North Dallas hotel with their three dogs. Now, they’ve moved back in — and, a year after the tornado, they barely recognize their neighborhood.

On the day after Christmas last year, a tornado tore through Rowlett, ripping apart houses and destroying businesses. Since then, Anthony Fowler-Rainone has watched the houses in his neighborhood go through several phases of being rebuilt — or not.

“That was totally demoed; that was down to the concrete,” Anthony says about one house. “They built a safe room and put hurricane straps. It’s pretty much a fortress. The next two lots — they were sold. The house with all the tarps on it — absolutely nothing’s been done with that house.”

Anthony points out the changes from his front steps. Most of the trees are gone. Some houses are still boarded up and many lots feature nothing but concrete slabs.

He’s lived on this block for more than 30 years. A decade ago, his husband Alfredo joined him. The tornado changed a lot.

“There is very little resemblance here,” Anthony says. “Very few of the same people are here as a matter of fact.”

That’s because so many families opted not to rebuild, and instead, decided to sell. About halfway through the construction on their house, Alfredo wondered if they should have done the same thing.

“Then I got to the point where I was like we should’ve just sold the lot and moved on,” Alfredo says. I mean, it felt like we were never going to get in here again.”

They did, and just a few weeks after getting the keys, the place looks great. Paintings on the wall, wedding photos perfectly arranged, crystal back in the cabinets. It’s pristine. You would never know how much was destroyed on Dec. 26 last year.

“There’s no way to even get it through anybody’s head how stressful this is.”
Alfredo Fowler-Rainone, tornado survivor

Both men are HIV positive and on disability. They had what they thought was enough homeowners insurance, but soon realized their policy wouldn’t cover the entire rebuild and all the possessions they lost. To put their house back together, they skimped on some of the finishes to stay on budget.

“The curtains and window coverings,” Anthony says. “Some of the furnishings, we just continue using what’s been damaged.”

Even though it all worked out, Alfredo says the exhausting process is something he wouldn’t wish on anyone.

“There’s no way to even get it through anybody’s head how stressful this is,” Alfredo says. 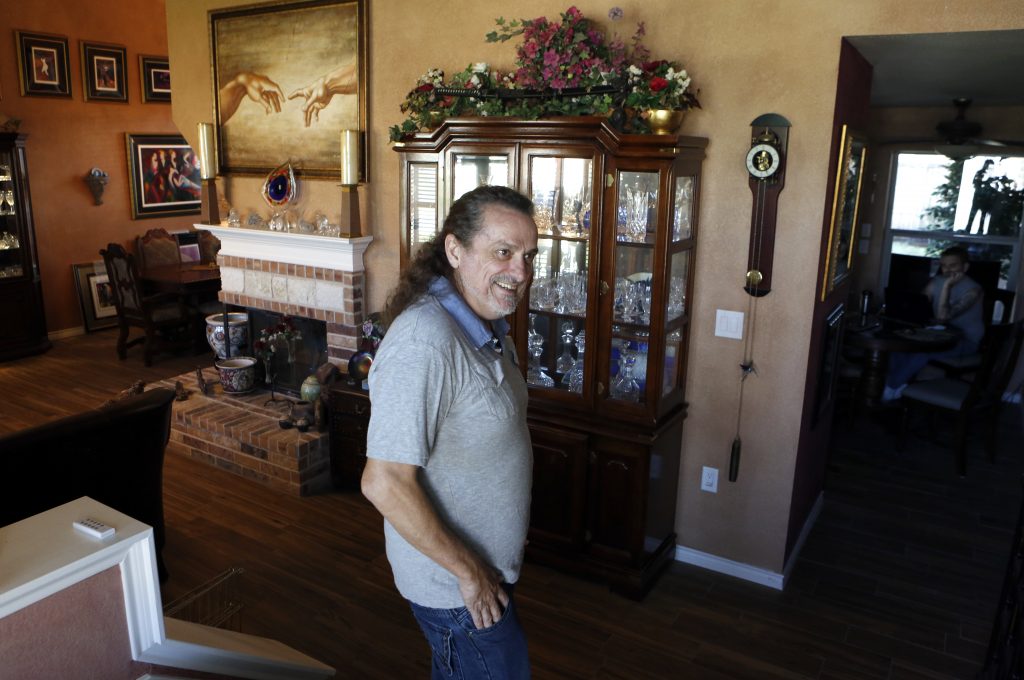 That’s what’s so draining about this kind of financial trauma, even with insurance. Each conversation with the company, each reimbursement claim, feels like a battle.

“You’re still depressed, you’re still dealing with the loss,” Alexander says. “And now you have to put up so much energy to find new furniture, and that’s not easy, and maybe dealing with other issues, maybe financial, because some things will be covered and some won’t.”

Alfredo and Anthony worked with eight different insurance adjusters during their rebuild. Construction hit a snag when some of their roofing shingles were stolen. Every step of the journey was hard.

Alexander, who works for the city of Dallas and helped with counseling efforts after the tornadoes, sees “recovery fatigue” all the time.

“They’re dealing with their own hurts while yet fighting for their rights,” she says.

And that’s what Alfredo and Anthony have been doing for nearly a year. They’re tired. Their budget is tight, and they’re still missing some of the beautiful things they gathered over their lifetime. 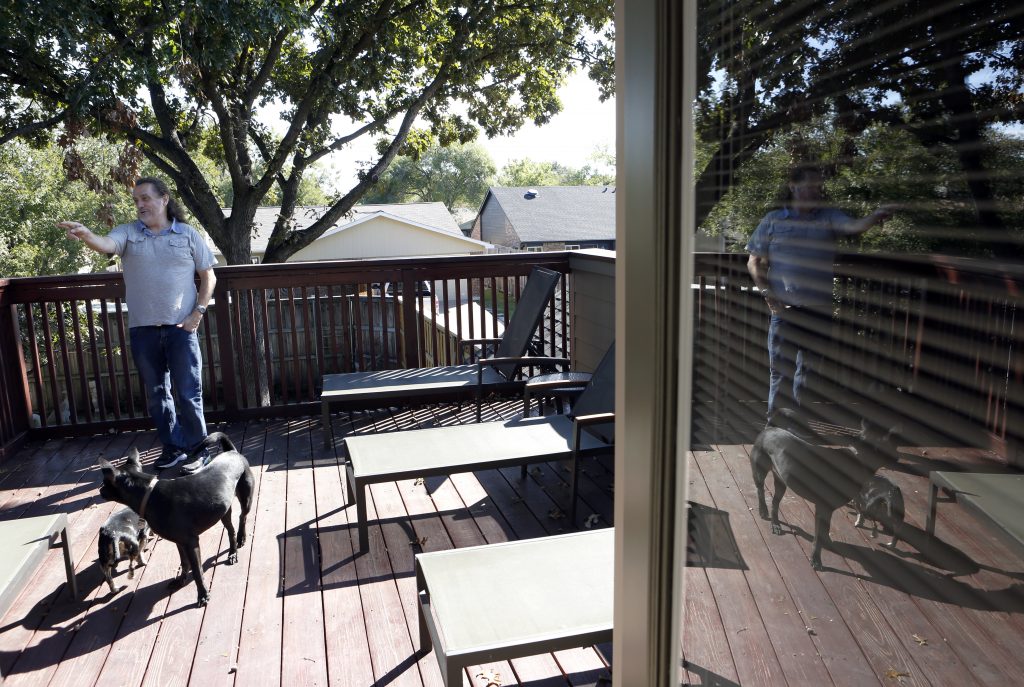 Happily, some of their most important treasures are right back where they belong.

And because Alfredo wasn’t in Anthony’s life when he first bought the house, now there’s some shared ownership to celebrate.

“Before it was more his home. Now I feel like it’s my house, too.” Alfredo says.

And after riding out a tornado inside it, and watching construction crews take the better part of a year to rebuild it, Anthony and Alfredo have no plans to move. Ever.

“Yeah, I ain’t going nowhere. I mean, I’m dying in this house,” Alfredo says. He laughed.

And once you know what it takes to rebuild a life, Alfredo says, you aren’t in such a hurry to upend the one you’ve got.

Learn more about Anthony and Alfredo

After Tornado, Couple Rebuilds Their Home — And Their Lives — On A Tight Budget

Bracing For The Storm's Anniversary After Months Of Strife