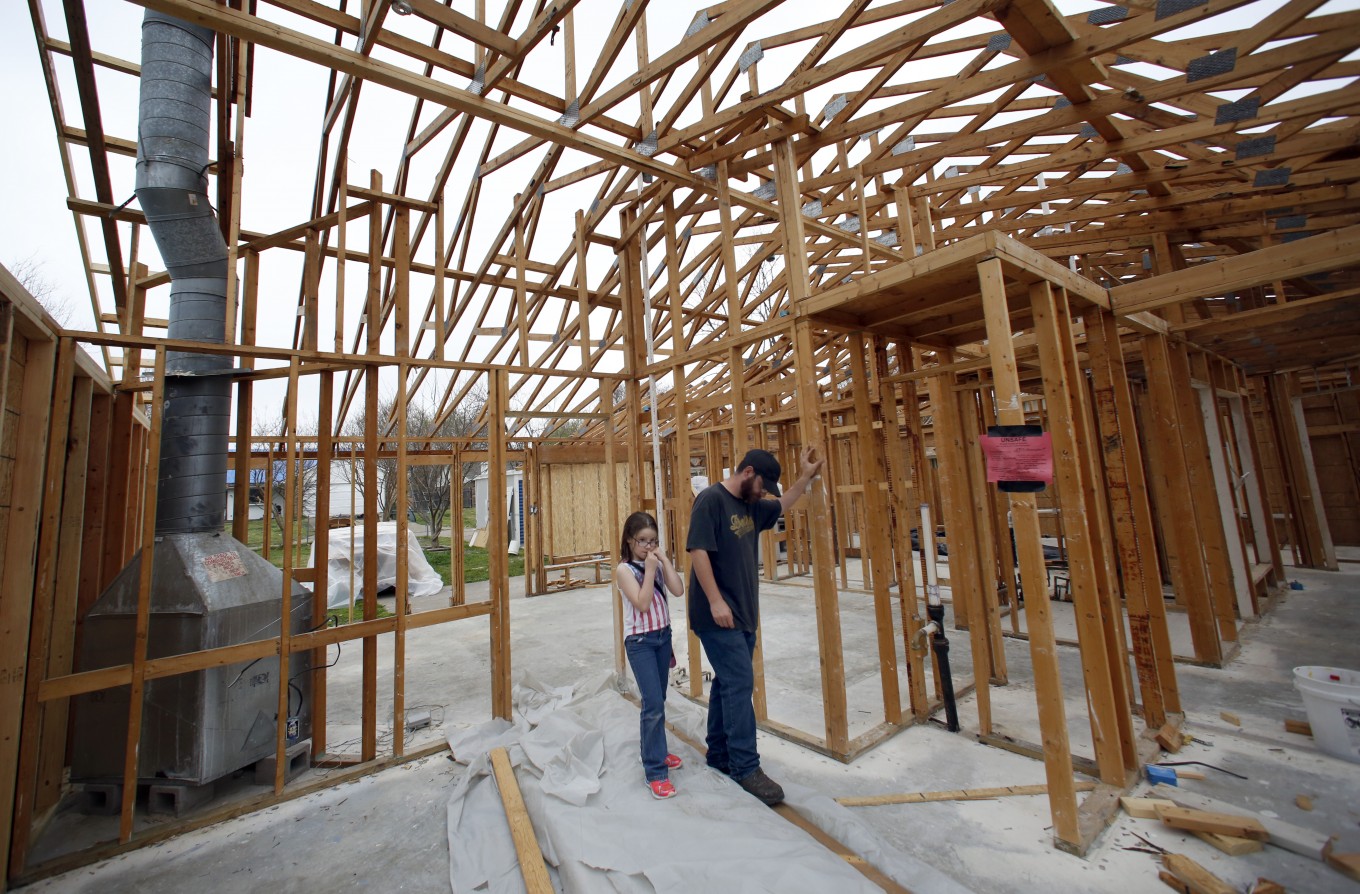 The Insurance Information Institute estimates only 40 percent of people who lease apartments or houses have renter’s insurance. They need that money to buy food and pay the bills. One Garland family is living with the fallout after a tornado ripped its house apart and smashed its truck. While the landlord pays to rebuild the home, the family pays to fix the rest.

A soundtrack of nail guns, hammers and electric saws punctuates an otherwise quiet day on Oceanport Drive in Garland.

Contractor Charles Beck is working hard to put a storm-wrecked house back together. He’s particularly invested because he used to live here.

Before the tornado, he was renting it with his fiancée and their three kids.

“Luckily, we got the contract to do the repairs on our home, so that helped put me back to work,” Beck said.

Repairing his own home is Beck’s first contracting job since his work truck full of tools was crushed during the Dec. 26 tornado. He said he had general liability insurance on the truck, so the damages were not covered. The many tools he lost to the storm totaled about $10,000, he said.

Financial stability is something this family desperately needs right now. They didn’t have renter’s insurance, either. They have to replace everything they lost from the storm out of pocket.

“When you’re looking at an extra $100, $150 a month when you’re already on a tight budget, it’s a lot to spend. And you never think something like this is going to happen so you’re like, ‘I’ll be OK.’”

BUDGETING FOR THE UNEXPECTED

Why are Beck and his family among the 60 percent of renters who don’t have insurance? Why didn’t they carry full coverage on the truck?

They couldn’t afford it. 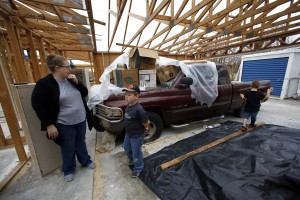 Jessica Cadick, and two of her children, from left, Joshua Tucker, 9, and Kaden Beck, 6, at their Garland home. Photo/Lara Solt

Beck and his fiancée Jessica Cadick spent last fall calling insurance companies to get renter’s insurance quotes, but they decided to put off buying a policy until the first of the year.

“Get through Christmas, make sure the kids had a good Christmas and then get renter’s insurance in January,” Cadick said. “So five days previous to [the storm], it would have really been handy.”

Beck has two children: a 6-year-old son and an 8-year-old daughter. Cadick’s son is 9. They’re living in a temporary rental house while the old one is under construction. Leasing it costs $200 a month more than their other place. That stretches their already tight budget even tighter. Plus, they’re homesick.

“The kids will come downstairs out of the blue and say, ‘I want to go home,’ when we’re sitting in our new rental,” Cadick said.

“They’re having to start all over. It’s like they’ve run into a wall and there’s no place for them to go.”

Cadick said the financial stress of surviving a tornado, losing a home, truck and most of their possessions has been devastating. And the road to recovery is pretty lonely.

One place that hasn’t forgotten? Friendship House, which is sponsored by First Baptist Church of Garland. 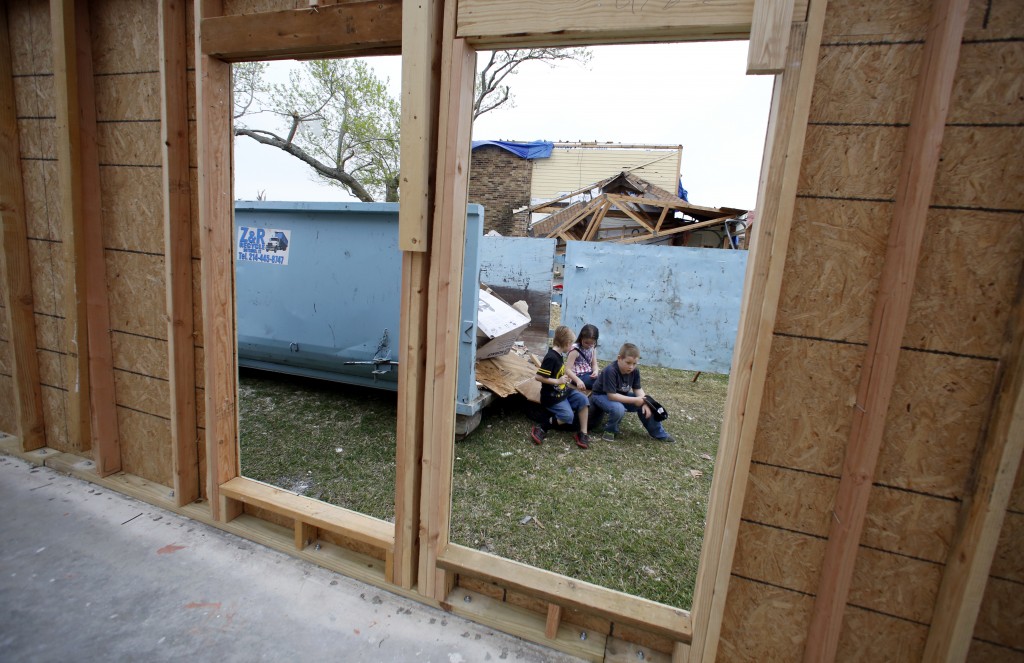 From left: Kaden Beck, 6, Kairi Beck, 8, and Joshua Tucker, 9 play in the yard at their Garland home. Photo/Lara Solt

For a list of important documents you need stored in a safe place during a storm, check out this checklist.

“We’re helping them to move in,” Christie said. “We’ve helped people with storage sheds, getting moving vans, car payments, insurance payments. … Sometimes we’d be able to put them up in a motel for two weeks or even a month depending on the situation.”

Friendship House has spent almost $60,000 to help more than 220 storm victims so far.

For people already worried about money, rebuilding after a tornado is almost too much to bear, Christie said.

“They’re having to start all over,” he said. “It’s like they’ve run into a wall and there’s no place for them to go.”

Many folks skip things like insurance to free up money each month.

“I think it’s very common, unfortunately,” Christie said. “They think this is the only way they can make it is to take away from Peter to pay Paul.”

LOOKING FORWARD TO A HAPPIER FUTURE

Back at the rebuilding site, Jessica Cadick is impressed by the progress. She hopes her family is back where they belong before summer because she and Beck plan to tie the knot in July. After the storm, people like her wedding photographer happily obliged. 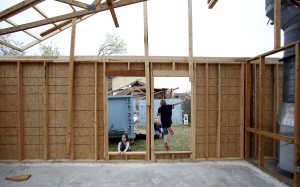 Kaden Beck, 6, leaps through the window of a wall that the December tornado took out. Photo/Lara Solt

“I called to cancel our contract afterwards because we didn’t have the money any longer to pay for a wedding,” Cadick said.

But the photographer offered to take pictures for free and found a wedding planner to pick up almost all of the rest.

The wedding serves as a bright spot in the not-so-distant future, even though reminders of the storm are everywhere. All this family has to do is pull up a bank statement or glance at the tallest tree in their old front yard.

“That’s my living room curtain. It’s been there since the night of, and throughout the wind and the rain we’ve had since, it’s still there,” Cadick said. “It’s at least 40 feet off the ground.”

It’s funny, Cadick said, how a piece of fabric, tangled in the branches of an old tree has come to stand for so much. 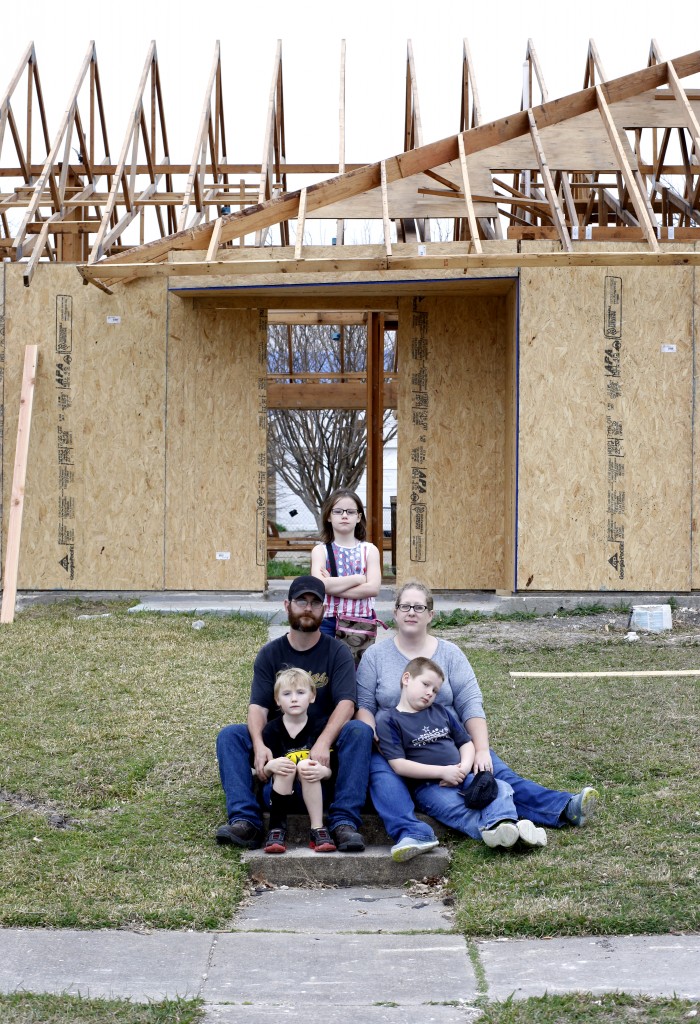 After Tornado, Couple Rebuilds Their Home — And Their Lives — On Tight Budget