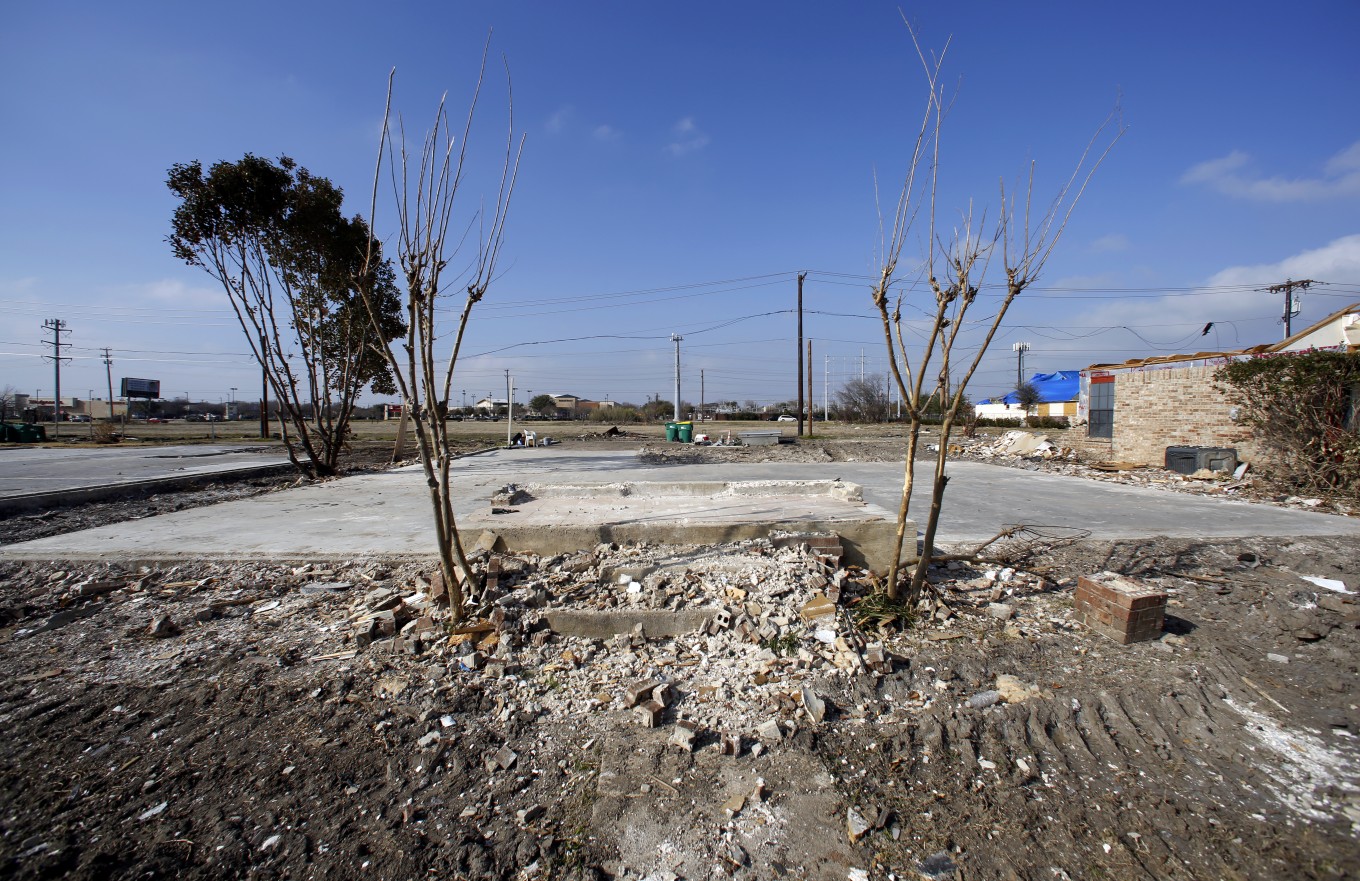 What is left of a home across the street from the home of Alfredo and Anthony Fowler-Rainone. Photo/Lara Solt
The KERA Radio story

After Tornado, Couple Rebuilds Their Home — And Their Lives — On Tight Budget

A Rowlett couple owned a home free and clear, and they had insurance. Then the Dec. 26 tornadoes hit. The problem? Rebuilding costs more than what insurance is paying. They’re both HIV positive, on disability and live on a fixed budget. For this couple, there isn’t much room to cut back.

Alfredo and Anthony Fowler-Rainone love listening to wind chimes in their quiet backyard. The sound of a tarp, cracking as the breeze whistles through a gaping hole in their roof, is less soothing.

On Dec. 26, Anthony said they barely made it inside their laundry room before the worst of the storm slammed into the house.

“Hugged each other, held the dogs tight. Felt the house lift up, jam down,” Anthony says. “And I just yelled out, ‘we’re hit!’” 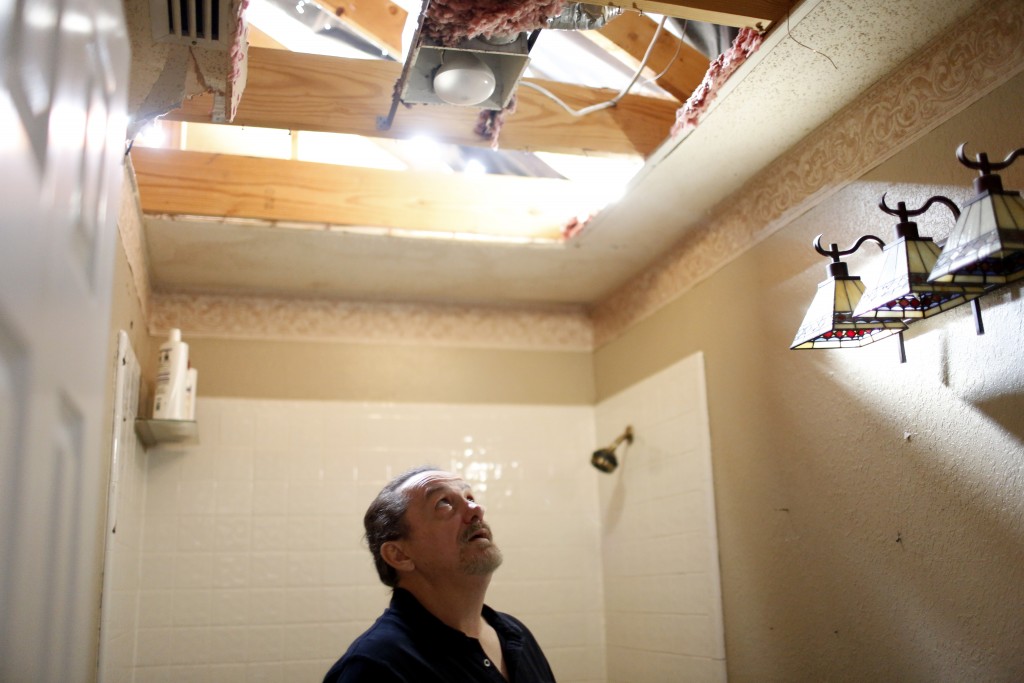 Anthony Fowler-Rainone of Rowlett looks into a hole in the bathroom ceiling that caved in when his home was damaged in the December tornadoes. Photo/Lara Solt

He’s lived in his home for almost 30 years, and Alfredo joined him a decade ago. They got married in New York in 2011, before same-sex marriage was legal in every state.

It’s been a very happy home, Alfredo said, even though a tornado peeled off the roof, twisted the second story and skewered the drywall with two-by-four beams.

“I’m so stressed out — half the time I’m ready to start screaming at somebody,” Alfredo said.

“Every time I think about it, I want to go off in a corner and cry. I don’t know where we go from that point, other than cut what we have to cut to get our home back.”

Hiring engineers and contractors to evaluate tornado damage is taxing. Anthony said it gets worse when you thought you had more than enough insurance, then realize your homeowner’s policy won’t cover the full cost of repairs.

“I went from being way over-insured to sweating bullets and being underinsured,” he said.

The couple will be about $20,000 short when all is repaired, rebuilt and replaced. Alfredo, 49, and Anthony, 53, don’t have much in savings and live on $2,100 a month in disability payments. They can’t work overtime or pick up extra shifts.

All they can really do? Chop every ounce of fat from their budget.

“Every time I think about it I want to go off in a corner and cry,” Anthony said. “I don’t know where we go from that point, other than cut what we have to cut to get our home back.”

They’ll have to cut back on everything, with every dime going toward repair. 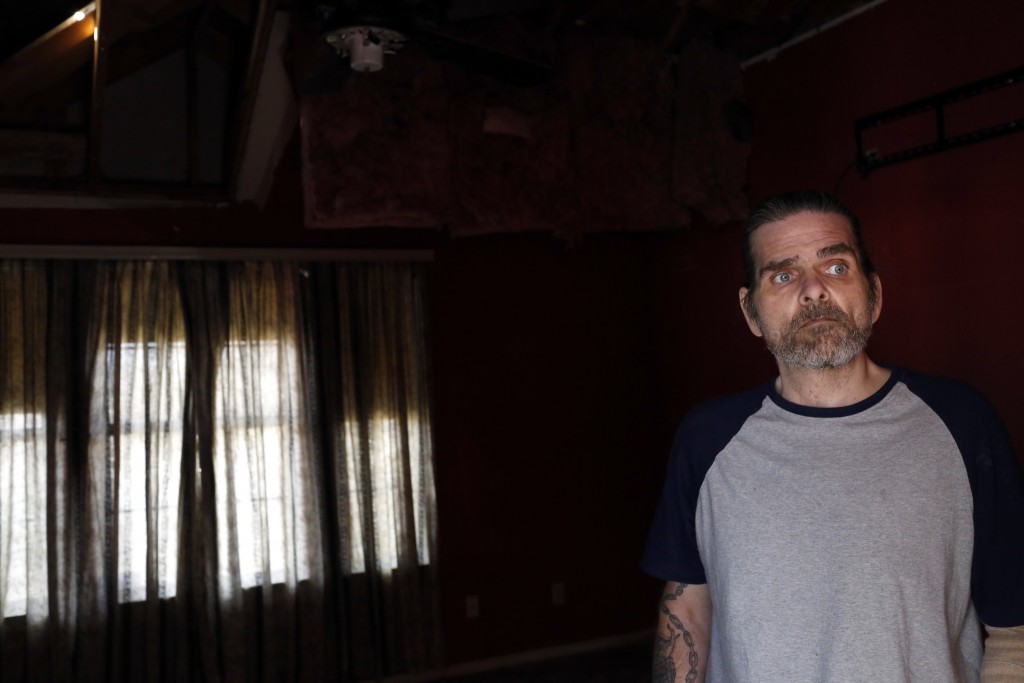 Alfredo Fowler-Rainone listens as Anthony Fowler-Rainone, both of Rowlett, recounts
the night their home was damaged in the December tornadoes. Photo/Lara Solt

About 60 percent of American homeowners are underinsured, according to the research group CoreLogic. Many people are underinsured because construction costs are high, which means rebuilding is expensive, especially in North Texas.

Meloni McDaniel, President of Texo, the construction trade group for this part of Texas, explains why that’s the case: Construction is in high demand, and the supply of skilled workers is limited. Therefore, costs increase. Even more, the commercial industry is booming and those jobs are monopolizing the workers and materials from the residential market, she said.

When a region is hot, building and rebuilding just costs more, which is why people who aren’t diligent about updating their insurance policies could find themselves short when disaster strikes.

If that happens, McDaniel said working with honest contractors is the first step to take. They can help you stay within the limitations of your budget, which might mean skipping finishes, or substituting cheaper materials, she said.

“There’s a whole lot of wholesalers around here, so you don’t have to buy granite from the nicest place; you can buy laminate counter tops,” Meloni said. “You can exchange your tile for something that’s not shipped in from Italy for something that you can go to Home Depot and purchase.”

“We sat here and watched our lives being pitched out the door. For me, I don’t know about Alfredo, but for me, it felt like I was dead. It was just my spirit watching what was being done, and I couldn’t do anything about it.”

Alfredo and Anthony know a lot about staying within a budget. Insurance doesn’t cover landscaping, and they aren’t replacing that out of pocket. They need a new air conditioning unit upstairs that might have to wait. An electrical repair on their truck is on the back burner, too.

They can only cover the essentials. Anthony said they aren’t willing to take on new debt when they don’t have the money to dig themselves out.

“We have no problem paying our bills, both have excellent credit ratings, but everything is budgeted,” Anthony says. “This is not in the budget — not by any means.”

Another unexpected consequence of the tornado? Prescription drugs. Both men are HIV positive. That, Alfredo says, makes medications crucial. A lot of necessary medicine was ruined by water or just simply disappeared during the storm. Alfredo said medicine was one thing he couldn’t afford to lose.

Along with a lot of beautiful things they collected over the years — artwork, Tiffany lamps, china, crystal — Anthony said seeing their wrecked treasures hauled to the dump was gut-wrenching.

“We sat here and watched our lives being pitched out the door,” Anthony said. “For me, I don’t know about Alfredo, but for me, it felt like I was dead. It was just my spirit watching what was being done, and I couldn’t do anything about it.”

Moving day should come sometime this summer, when they finally trade a cramped hotel room for the house rising from the rubble.

The silver lining? Rebuilding a life, together. 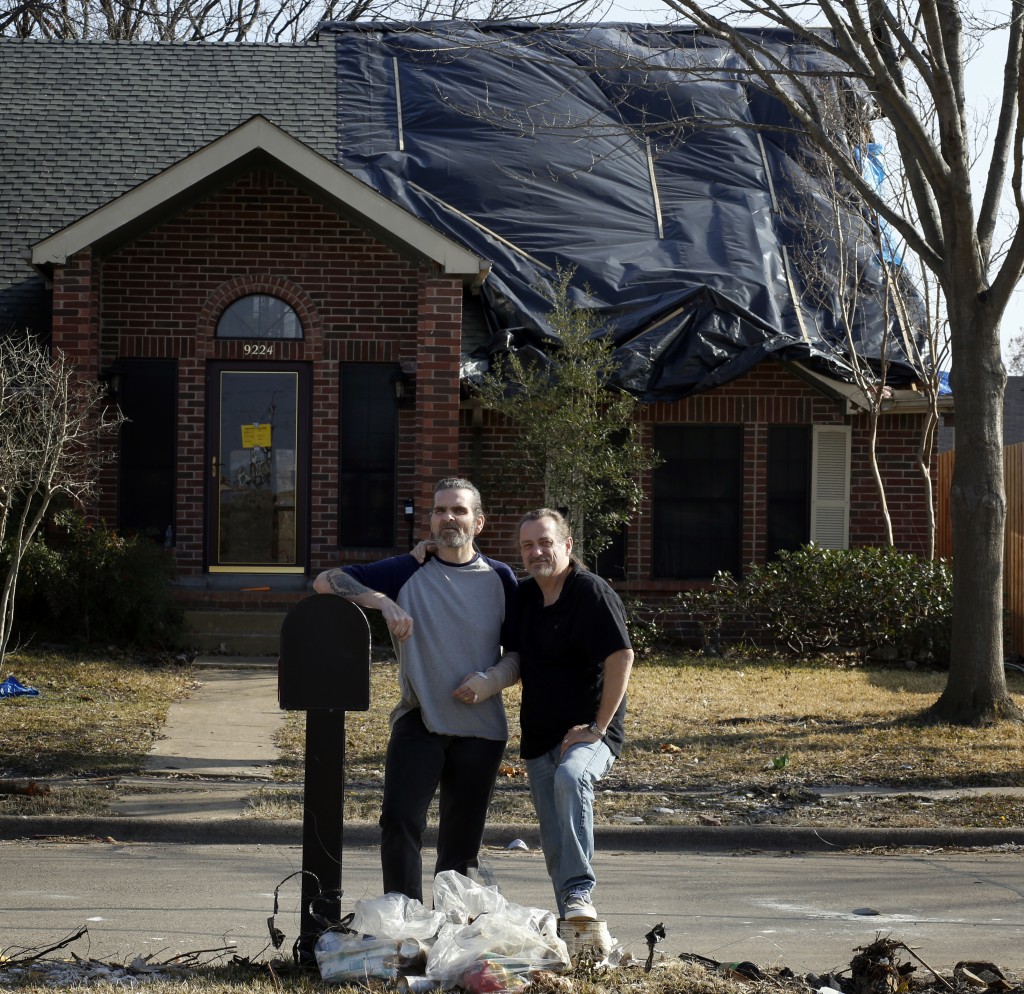 The home of Alfredo, left, and Anthony Fowler-Rainone of Rowlett was damaged in the December tornadoes. They are rebuilding their house — and their lives. Photo/Lara Solt

Here's How To Build Your Own Tornado Kit