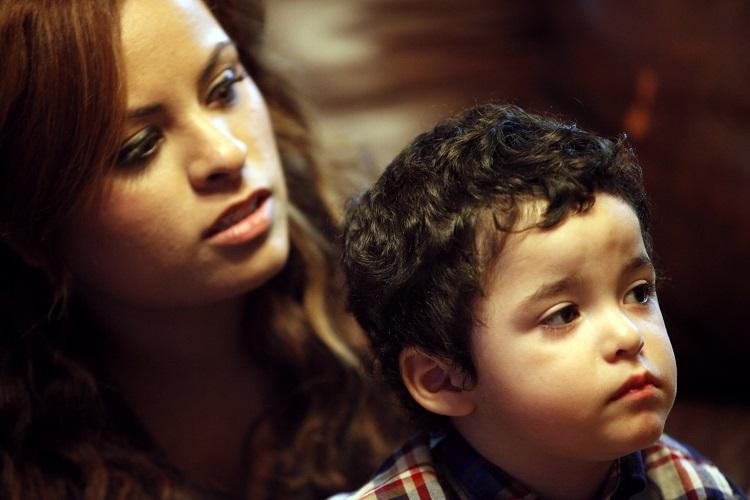 Elizabeth Madrid and her 2-year-old moved in with her parents after husband Isac died in February 2014. Photo/Lara Solt
The KERA Radio story

After Husband’s Death, A Widow Is Left With Grief, A Son — And Bills

A third of North Texans are living without enough cushion to last more than a few months after a financial disruption. KERA’s series “One Crisis Away” put a face on asset poverty by chronicling four local families.

One was a couple in Rockwall, Isac and Elizabeth Madrid. Days after the birth of their son, Isac was diagnosed with a rare disease. He was in and out of the hospital for more than a year and died last February.

Since then Elizabeth has been managing medical bills, a lively toddler and her own grief.

A handsome, stubborn daredevil, little Isac is his dad all over again.

“Physically and attitude-wise, he’s just like his dad,” Elizabeth says.

And she doesn’t mind one bit.

“It’s nice to have a little piece of heaven with us,” she says. “It’s comforting for me and the whole family.”

Before Isac died, the Madrids were living in Rockwall, in a house they owned. Afterward, everything changed.

“I moved in with my parents and I put my house to lease and there’s a new family living there,” Elizabeth says.

She gets a little over $1,300 a month by renting out her house. She says the money helps, but converting the property to a rental serves a more important purpose. The house in Rockwall is too big, too quiet and too full of memories.

“It’s really good because I’m never alone. I always have somebody around, and that’s what I want,” Elizabeth says. “I want company and not be alone and sad and thinking.”

Since Isac first got sick, Elizabeth has been shouldering her family’s workload. She would shuttle the baby to a relative’s house, drive Isac to the hospital and rush to Plano for a full, eight-hour workday as an administrative assistant.

Though she doesn’t stop at the hospital anymore, she still works full time and spends every other free moment chasing her little guy.

That doesn’t leave a lot of time for grief, but Elizabeth would rather keep occupied.

“I mean some days are OK, some days are good, and some days are bad. I try to keep busy as much as I can,” she says. “I pretty much overbook myself, which is kind of bad, but it helps. It helps to be busy.”

Elizabeth says one thing she isn’t ready to face is the ever-growing pile of medical bills, thousands and thousands of dollars worth.

She just needs more time, she says, something her husband didn’t get enough of. Time to live and laugh. Time with his wife and the little boy who’s his spitting image.

“He sees pictures, and you know, he knows who his dad is. My mother-in-law actually had some Christmas lights outside the house and she told him that they were his dads, because they were ours,” Elizabeth explains. “So now every time he leaves his grandma’s he’ll tell anybody, those are my daddy’s lights.”

Isac remembers his dad by pointing out twinkle lights and flipping through photos. For Elizabeth, all it takes is one look at the boy in her arms.

Struggling With Finances, Not Their Faith