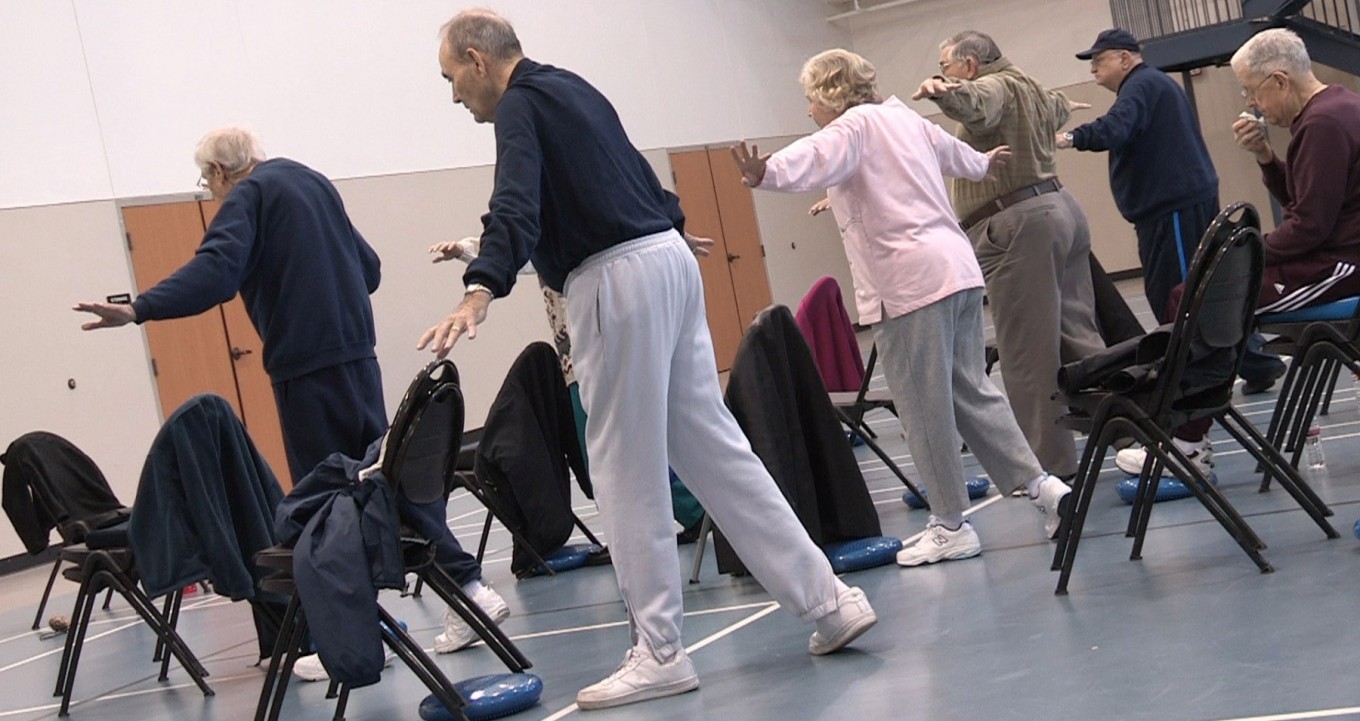 In 2011, more than 60,000 Texans older than 50 were hospitalized for falls. And 95 percent of hip fractures are the result of falls. Those who do fall are afraid of falling again. High-tech gear is helping some people get over their fear of falling — and helping others prevent future falls. And a local hospital is using technology and teamwork to reduce falls among patients.

Nine years ago, Joyce Powell was in a hospital, on her way to the bathroom, when she fell and broke her hip.

She recovered. But there’s something she hasn’t gotten over: A fear of falling.

“It stays with you,” Powell says. “You’re aware that you can’t function like you once did.”

It might sound silly, but it turns out that people who are afraid of falling are actually more likely to fall. 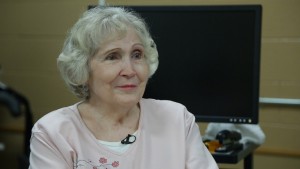 Nine years ago, Joyce Powell fell and broke her hip. Although she recovered, she’s still overcoming the fear of falling.

That’s why Powell attends a fall prevention class at the University of Texas at Arlington: not just to get stronger, but to face her demons.

At one recent session, an instructor tells participants: “All right, so now what we’re going to do is a toe touch with the right foot, if you feel comfortable.”

Participants are in their 70s, 80s and 90s, and their workouts involve everything from balance balls to playing Wii games.

“The greatest predictor of a future fall is a previous fall,” says Chris Ray, the kinesiologist who’s leading the efforts at UT-Arlington’s Center for Healthy Living and Longevity.

But exercise is key: Studies show exercise can prevent falls in older people.

“We start to restrict the activities we perform,” he says. “As we age, if we were walking on an icy sidewalk, we decide we’re not going to walk on icy sidewalks anymore. And that’s a very appropriate selection. But if we don’t replace that, then we see a decline of strength, neurological, eventually cardiovascular, pulmonary, skeletal, all these systems start to decline. Eventually, that has a very compounding effect. ”

One of the keys to preventing falls is improving balance. As we age, natural changes occur in hearing, vision and proprioperception — what you feel in your toes and hands. It makes it harder to stay upright and oriented. If seniors can learn to better use those senses, then they’ll be less likely to fall. 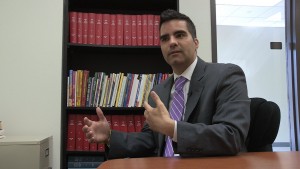 “The greatest predictor of a future fall is a previous fall,” says Chris Ray, the kinesiologist leading the efforts at UT-Arlington’s Center for Healthy Living and Longevity.

To do that, Ray tests them using something that looks like an open photo booth you would expect to find at an amusement park. The machine assesses how well someone can use the senses to maintain balance. The walls shift, the screen changes and the floor tilts.

“In daily life, when we see seniors that fall, it’s usually during multitasking,” Ray explains. “So what we’ll do is we have the opportunity to recreate that. We pipe in loud noises, city sound or music, pipe in visual distractors on the screen, or a test on the screen as they’re trying to maintain their postural control while the walls are moving in concert.”

This isn’t just for amusement. The goal, Ray explains, is to identify the best intervention for each individual. For some, a regimen of tai chi might be enough. For others, it might be weightlifting or even practicing walking with their eyes closed.

Powell says she’s felt more confident getting around and traveling since she began classes at UT-Arlington. Still, she’s cautious.

“When I walk, I look to see where I am, particularly if I’m on uneven ground,” she says. “But I look at my feet and I’m constantly looking to see what I’m stepping on, to see if there’s something there that would create a problem.” 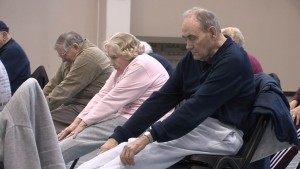 Joyce Powell, with her husband, Thomas, says she’s felt more confident getting around and traveling since she began exercise classes at UT-Arlington.

Freedom from falls is never guaranteed. But dedication to an exercise program can help seniors keep their balance without giving up the activities they love.

“It’s one of the things I’ve learned you just have to do in order to protect yourself to remain upright,” Powell says. “I guess I could use a walker to do it but I don’t want to. I want to be free.”

Learn how John Peter Smith Hospital in Fort Worth is trying to reduce falls among patients, thanks to technology and teamwork. 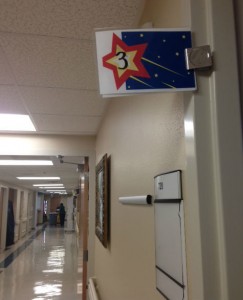 At John Peter Smith Hospital in Fort Worth, gold stars indicate a patient’s risk of falling.

That’s how many patients fell inside of John Peter Smith Hospital in Fort Worth last year.

“Nobody wants to hurt their patient,” Elisabeth Rodgers says. “The patients come into the hospital, they trust us, and they trust us to take care of them. We don’t want to send them home worse than they came in.”

Rodgers is a nurse leading a project to reduce falls at the hospital. Of those 632 falls, only one person broke a hip. Still, it cost JPS. The hospital alone had to pay more than $500,000 for things like diagnostic tests.

Then there’s the price families pay. Rodgers knows that firsthand. Her 83-year-old mom fell twice while in the hospital this year.

Every shift change, JPS nurses gather around a whiteboard to review which patients are considered a fall risk and why.

In the past, nurses were on their own when it came to preventing falls. Now, even the pharmacists are involved.

“Patients are coming in and they’re on so many different medications that they weren’t on prior to admission,” said Christy Johnson, who manages JPS’ clinical pharmacy. “We’re evaluating those to find out if there’s anything putting them at extra risk.”

Johnson says it used to be labor intensive for pharmacists to review medications and calculate fall risk. Now, with electronic medical records, it’s easy to automatically come up with a fall risk score for each patient.

“Now, every order that they write generates a score in the background that [gets sent] to the pharmacy, so that we are aware — like this new med causes them to be at increased risk, so in real time we’re able to see that,” Johnson says.

Another technology that’s helping to prevent falls is a sort of high-tech bed alarm. The standard bed alarm goes off when a patient tries to get out of bed, but it often goes off too late for a nurse to sprint in and help. Fall monitors – JPS uses one called the “sitter” – use sensors to detect slight movements, and the messages can be personalized.

Communicating the risks to patients and their families can be tricky. Nurse Sylvia Baker says for many patients, getting out of the bed and going to the bathroom alone is a statement of independence.

“It seems like it would be easy for them to realize they’re going to be a falls risk but they’re like: ‘No; I can do this!’” Baker says. “And they don’t realize until they’ve fallen.”

Over the past six months, JPS has cut back falls by 10 percent – that means they’ve prevented more than 30 falls.

All hospitals are trying to prevent falls, says Patricia Dykes, who studies patient safety for Brigham and Women’s Hospital in Boston. She says after Medicare stopped reimbursing for fall-related injuries in 2008, hospitals across the country have been trying to step up their slip prevention.

Until 2011, no one had done a clinical trial showing what worked. So Dykes and her team investigated.

“What we found is falls at hospitals are really a communication problem,” Dykes says.

Nurses conduct a risk assessment and make a fall prevention plan, but that plan isn’t shared with other team members, or the patient, or their family. It’s like hiring a consultant and putting the recommendations in a shoebox.

“In our study, we had the patient complete the fall-risk assessment in the electronic medical record,” Dykes said. “When they filed that assessment it would automatically generate a personalized plan for that patient. They understood why they were at risk and what the plan was so that the whole team, including the patient and the family, could work together to prevent the fall.”

Dykes says the fall prevention program is on the right track, using a combination of technology and old-fashioned communication.

The vast majority of hip fractures are the result of a fall, and more than half of all falls happen at home. Many of these falls could be prevented by making simple changes to the lighting and arrangement of furniture. How can you make your bedroom fall-proof?