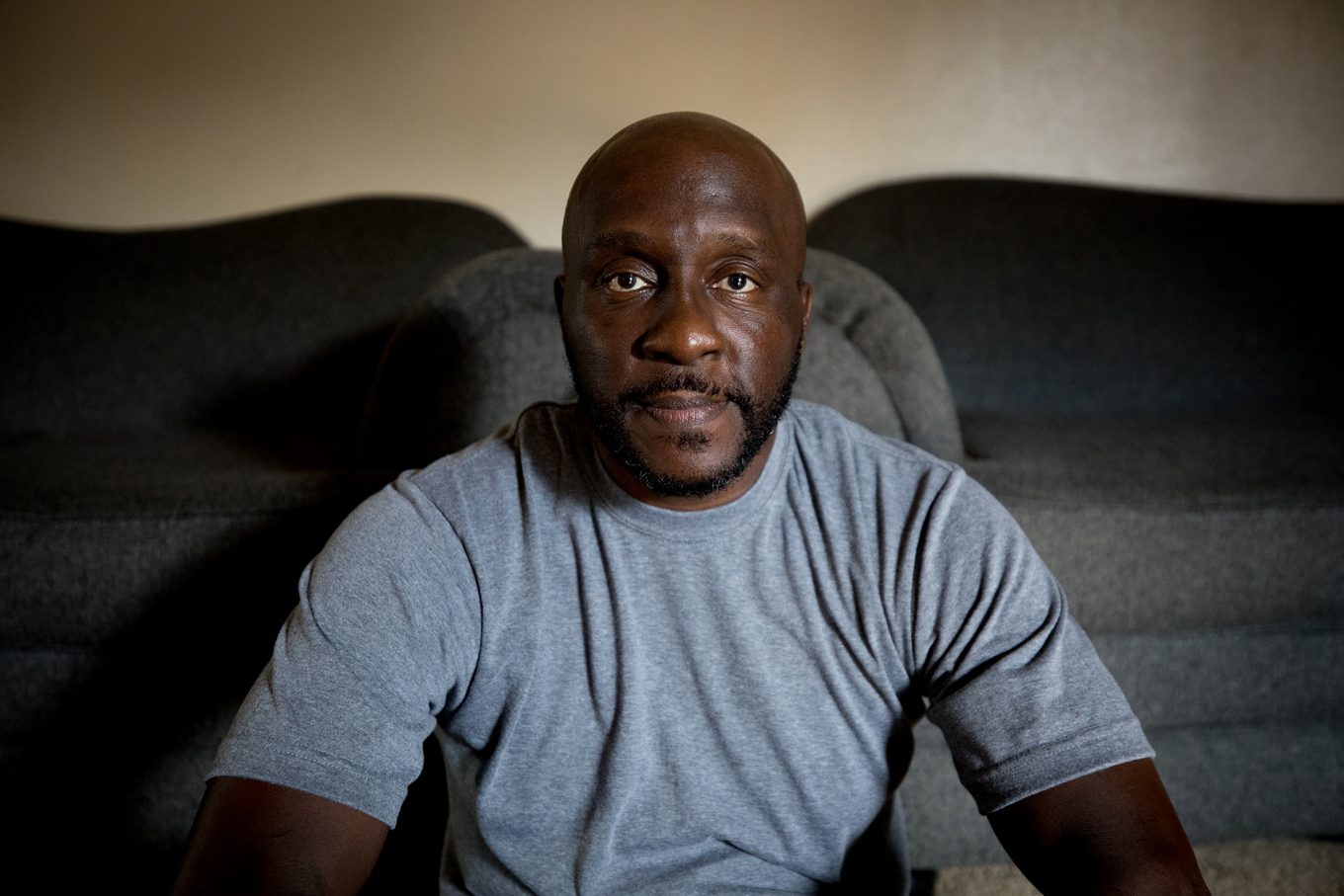 A lot of the debt Marc Wilson racked up while in prison has been reduced. He feels relieved — but guilty. / Photo: Allison V. Smith for KERA
The KERA Radio story

How Prison Crushes Ex-Offenders With Debt

Prison makes it nearly impossible to hold onto savings and earn money. But it’s a great place to take on debt.

Creditors don’t push pause while someone’s incarcerated. And because many people don’t have the money for lawyers or bail, those costs turn into debt owed to family and friends after release.

In Marc Wilson’s case, he had assets and plenty of savings before his seven-year prison sentence for drug trafficking began. By the time he was released in March 2019, he had nothing — except around $50,000 in delinquent child support.

It’s a sweltering September day outside the George L. Allen, Sr. Courts Building in Dallas. Wilson doesn’t seem to mind, despite wearing a dress shirt and dark suit pants. He just left a meeting with the mother of his 14-year-old son. They had a sit-down with their child support counselor. 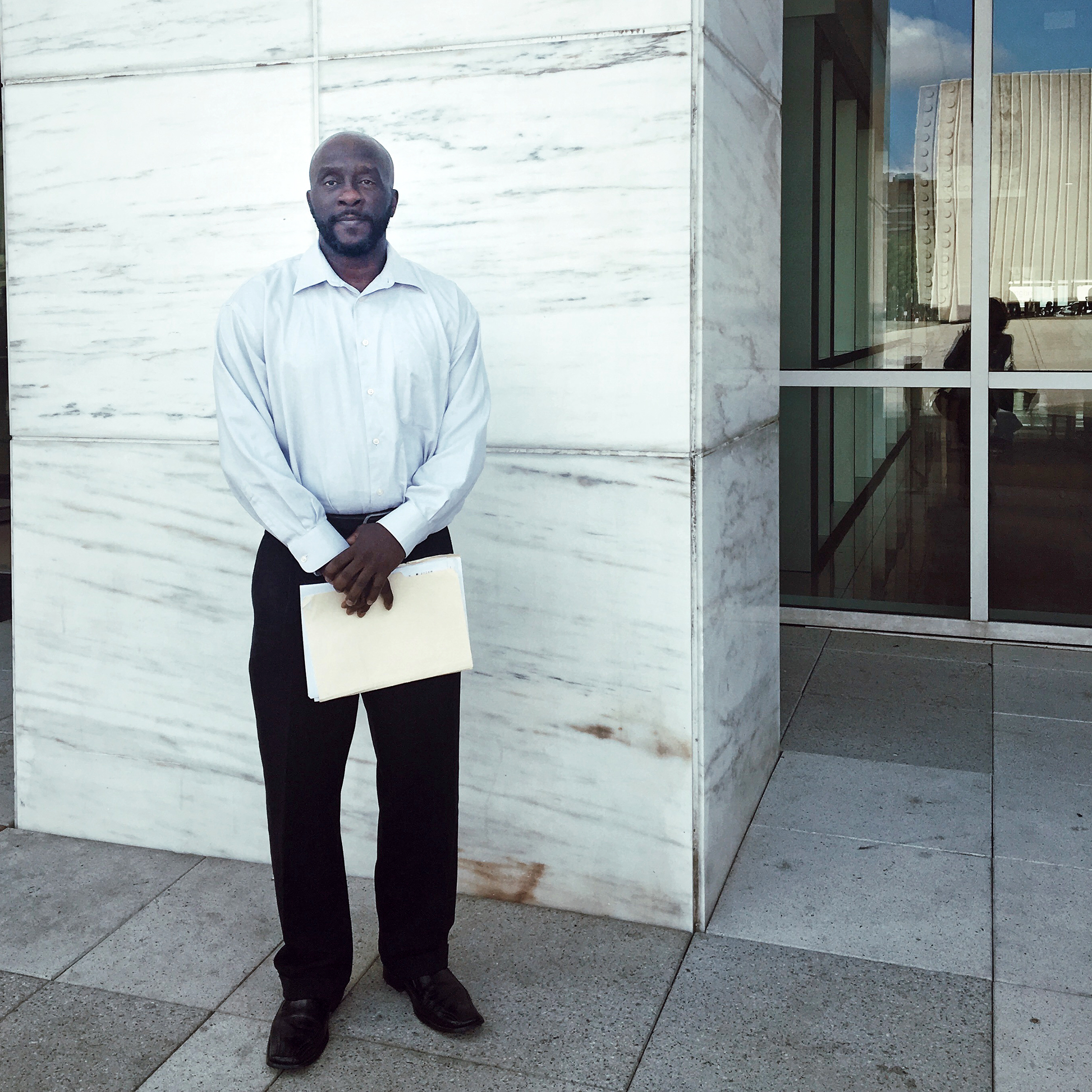 It was decided that Wilson wouldn’t have to pay the child support that stacked up while he was in prison.

Wilson’s relieved because his finances are stretched incredibly thin these days. When he was convicted, his house was foreclosed on. He spent his $20,000 savings on his criminal defense. He was a nurse before prison, but the state revoked his license.

Now he installs cable lines at construction sites and earns less than one-third of his $89,000 per year nursing salary.

He has mixed feelings about the forgiven child support, though.

The financial burden of that $44,000 debt might have crushed him. But the guilt of not paying it is doing the same.

“That’s what I should have been paying,” he says. His son’s life “would have been a lot better if I was making the money that I was and being able to make that amount, that payment.”

Read, see and hear about how prison will continue to haunt Wilson’s efforts to rebuild lost wealth, even though he’s completed his sentence.

Here’s how Wilson and other ex-offenders’ financial losses from incarceration, compounded by systemic racism, can inhibit younger family members from building wealth.

Explore more stories in KERA’s One Crisis Away: The Price of Prison series.

Wilson won’t get out of this with zero debt. He’s been out of prison for six months, and until today’s meeting, his child support payment hadn’t been adjusted to reflect his new income. So he’d been paying what he could — about $150 a month — but quickly found himself $6,000 behind. He also owes interest on that, and he owes interest on the $44,000 that was forgiven. His arrears now total $16,000.

Now, he’ll have to chip away at that. That’s in addition to his new monthly payment: 20% of his take-home pay.

Wilson is confident that he can keep up with what he owes now. But if the payment had been set higher, or those seven years of debt hadn’t been forgiven, it would be a different story.

People who don’t pay child support can be arrested. In that case, the child loses, the ex-partner loses, and so does the person headed to jail.

“Nobody wins [in that scenario], either, because you still can’t pay, and now you’re incarcerated and you lose the job that you had, with the minimal amount of money that you’re making,” Wilson says. “So, nobody wins.”

VIDEO: ‘At first it was hard to talk about prison’

“At first it was kind of hard for me to talk to anybody about prison because of the embarrassment and shame that I feel. But I own the time that I’ve done. … Just because you make a mistake doesn’t meant you have to live in that mistake.”

Wilson shares more about his background, his family and his perspective on moving forward:

How loved ones rack up debt, too

Child support isn’t the only debt that can haunt someone after leaving prison. Sometimes it’s as simple as owing money to loved ones.

Jorge Renaud works with Latino Justice, a national nonprofit focused on including Latinx voices in the conversation around criminal justice reform. He was also incarcerated for robbery for 27 years.

“You can go however many years you’re in there, and there’s nothing at all you can do to accumulate any assets or any wealth,” he said. “So when you get out, of course, you’re dependent on family or friends or whatever social services are still available to you.”

A prison stay is expensive for loved ones on the outside. They’re putting money in a commissary account for food, extra clothes and phone calls. They’re planning visits that require time off of work, several tanks of gas and a hotel stay.

“They probably don’t have assets, but what they do is deplete their savings quite a bit. You hear some horror stories around that,” Renaud said.

“There’s been entire communities, entire neighborhoods [composed] of people of color who’ve had generations and generations of men who’ve been incarcerated and thus have kept those communities in states of perpetual poverty.”

Renaud says he went into prison with no real assets. He came out with even less.

And that’s what is so difficult for Wilson Wilson to reconcile. He had something to build on — past tense. And if he’d never driven drugs across state lines, he’d still be building.

“I was on the right path to gaining wealth. And I had wealth,” Wilson said. “The mistakes — going to prison — that was my fault, and my actions alone. So, I mean, what else can you do?”

Not much, he says, but put one foot in front of the other, saving one dollar at a time.

NEXT » After serving two years in prison for possession of meth, Toby Savitz found herself in a series of low-paying jobs with no real path forward. She finally kicked the door open after landing a position at a nonprofit that helps ex-offenders like Wilson. But she admits, there aren’t enough jobs like hers to go around. Go to Toby’s story now.

For Teachers: A Lesson Plan On Personal Finance And Prison