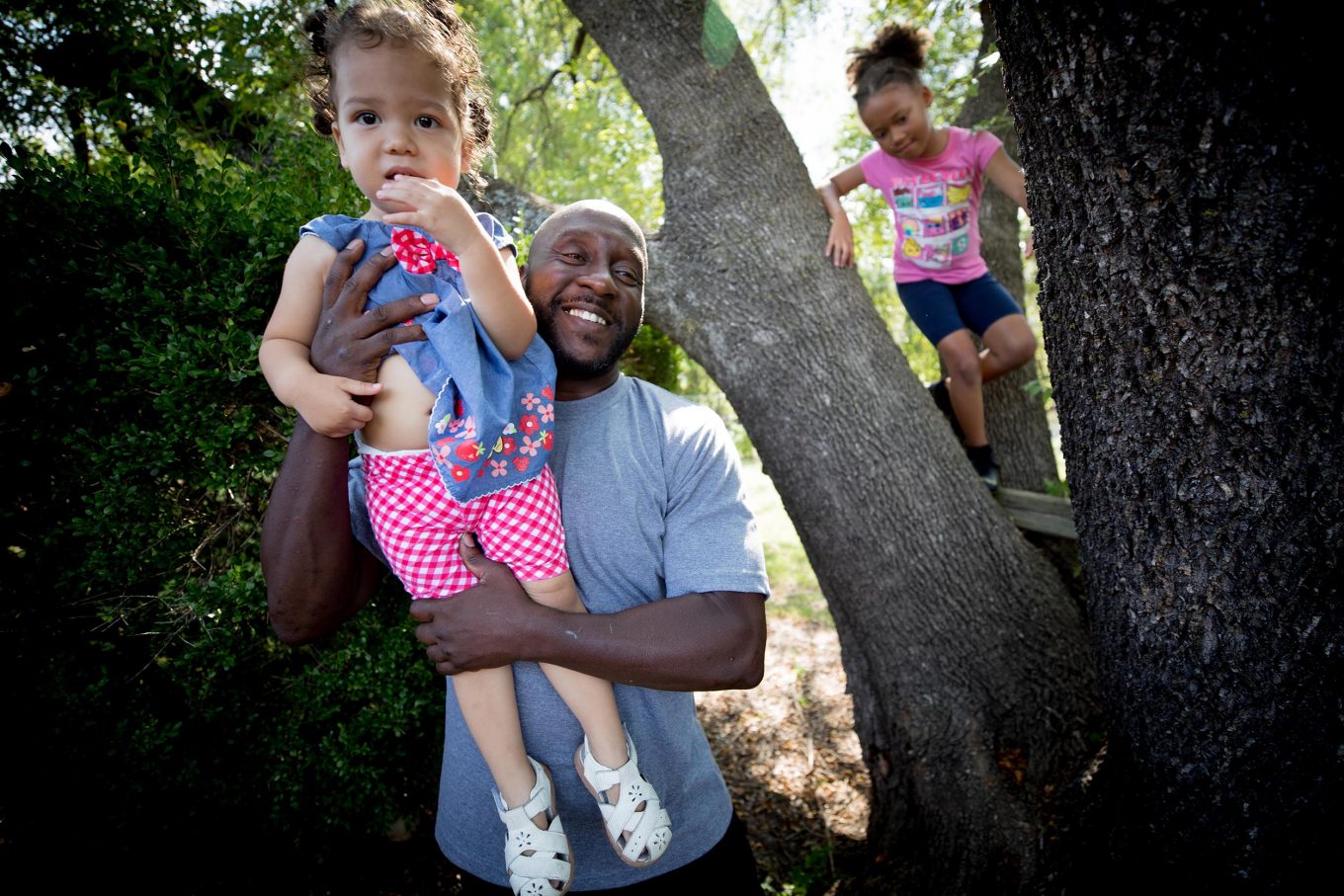 Before prison, Marc Wilson was set up to pass on wealth-building opportunities to his children and grandchildren, like a house and tuition help. / Photos: Allison V. Smith for KERA
The KERA Radio story

When people go to prison, income dries up and earning potential rockets backward. Whatever wealth they’ve accumulated, dwindles. And when you mix incarceration with America’s legacy of systemic racism? An ex-offender’s ability to hand off wealth to the next generation can mean an even heavier struggle.

Marc Wilson spent seven years in prison for drug trafficking. He drove cocaine from Texas to Missouri where he was caught, so he served his time there. His college-aged daughter, India Wilson, couldn’t afford to visit often. But they kept in touch: 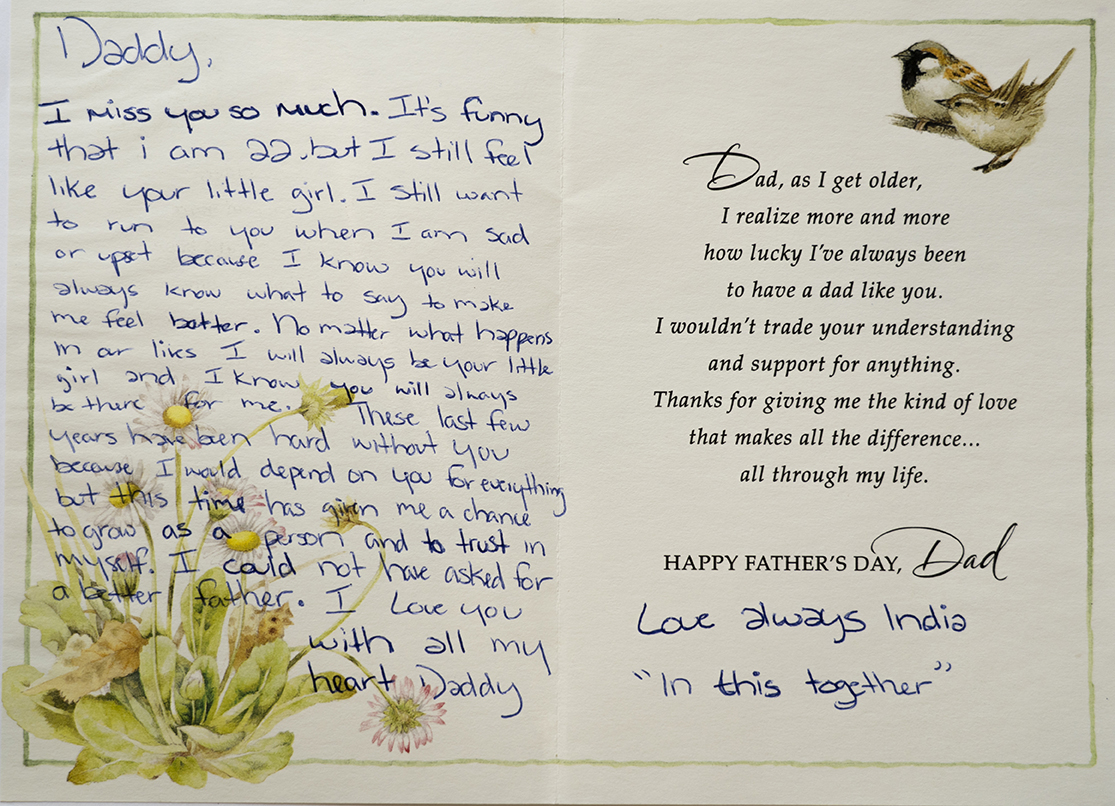 One of the cards India sent to her father in prison, when she was 22. / Photo: Thorne Anderson for KERA

“All of our letters that we’d write back and forth to each other, we’d always sign it ‘in this together,'” Marc said.

Marc and his wife divorced when India was 3. She lived with her dad after the split.

India is 26 now. She’s married and has two daughters of her own. When Marc was released from prison in March, he and India picked up their relationship right where they left off, spending weekends together and sharing meals.

“I knew he would be a great grandparent, like the way he was with me. Always supportive, loving,” India said. “I knew he would be that 10 times more, [not having] to worry about the discipline side. Like, that goes to me and my husband.

“I just knew it was going to be awesome.”

At a late August visit to India and Jose’s home in Garland, Marc was playing backyard soccer with 8-year-old Brayden. At one point he gave 2-year-old Meilani a boost up an oak tree. It was clear he was trying to make up for lost time. 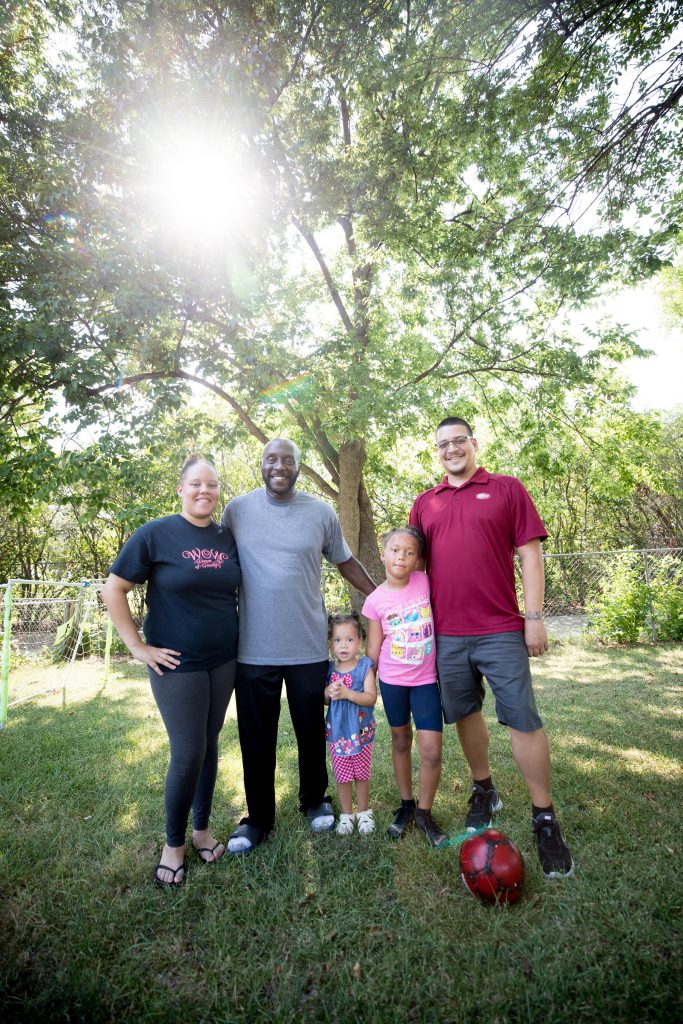 One thing he won’t be able to do, though: pass down an inheritance.

The GENERATIONAL COSTS OF INCARCERATION

When Marc went to prison, he couldn’t pay his mortgage, so he lost eight years of equity in his home. His $20,000 in savings were drained by legal fees. Those assets would have one day gone to his kids and grandkids.

“It’s kind of a depressing feeling to be honest with you,” Marc said. “Just knowing everything that I’m supposed to do for them, and the things that I should be doing for them.”

Before his conviction, when he was making close to $90,000 as a nurse, Marc would also have been able to help India with day-to-day expenses. That’s something he thinks about a lot, especially as India plans to attend nursing school, herself.

“There are certain things that she struggles with financially,” Marc said. “I can’t help her as much as I would like to. But I still try.”

He certainly can’t help as much as he used to, back before he had a criminal record.

That’s why prison doesn’t just cost the offender. It costs everyone around them.

“Incarceration does have generational consequences,” said Rashawn Ray, a sociologist who studies race and criminal justice at the Brookings Institution. “Part of what parents give to their children are wealth-building opportunities.”

Like passing down a house, or helping with a down payment. Paying college tuition can be a game changer, too.

Marc Wilson was in a position to help his daughter with all of that, before his arrest.

Ray says Marc’s story, and those of other black men and women, illustrates wealth inequality in America.

The racial wealth gap exists “not necessarily because of personal decisions, but instead due to systemic ways that racism has operated throughout American history,” Ray said.

A famous example of this is redlining, the practice of marking maps by race to measure the risk of extending loans and providing insurance. Lenders excluded entire communities of color, making it nearly impossible for residents there to build wealth by owning a home.

A home that could be sold or passed down. An asset.

Owning a home is often the best opportunity to build wealth before passing it down to the next generation of family, for those younger members to continue doing the same.

That opportunity hasn’t been available to everyone in equal measure.

Percentages of Texans who are homeowners

(Tap or hover your cursor over the icons to see the percentage of each group who are homeowners. Go here to see the data sources.)

For Texans who do own a home, the values are vastly different when broken down by race and ethnicity, too. Here’s a look at the median property values for each group.

The gap in median property value is even wider when looking specifically at the city of Dallas.

“Individuals who live in neighborhoods that are predominantly black oftentimes [have] about a quarter less wealth in their home” — even controlling for income and crime, Ray said.

The racial wealth gap specifically in Dallas is pronounced: 35% of black households have zero net worth.

That’s more than double the percentage of white households in the same boat.

Trying to find a way forward

Despite those statistics, Marc was able to build wealth before serving time. But while prison wiped out his assets, it did the opposite to his debt. He owes back child support for his teenage son in Rowlett, and his student loans from nursing school still loom.

He has to find a way forward on his $12-per-hour job laying cable. In a way, being locked up prepared him for that.

“Not having anything in prison, I know that I don’t need as much to make me happy,” he said.

While Marc is starting over financially, he says he’s determined to never again miss life’s priceless moments — like when his grandkids hit the soccer field.

NEXT » When Marc Wilson was locked up, his income disappeared — but the child support meter kept running. Even though he’s out of prison and working, he can’t even cover his old monthly payment. Incarceration wipes out wealth and builds a mountain of debt in its place. Read or listen to this chapter of Marc’s story.

How Prison Keeps Personal Wealth Forever Out Of Reach

How Prison Crushes Ex-Offenders With Debt