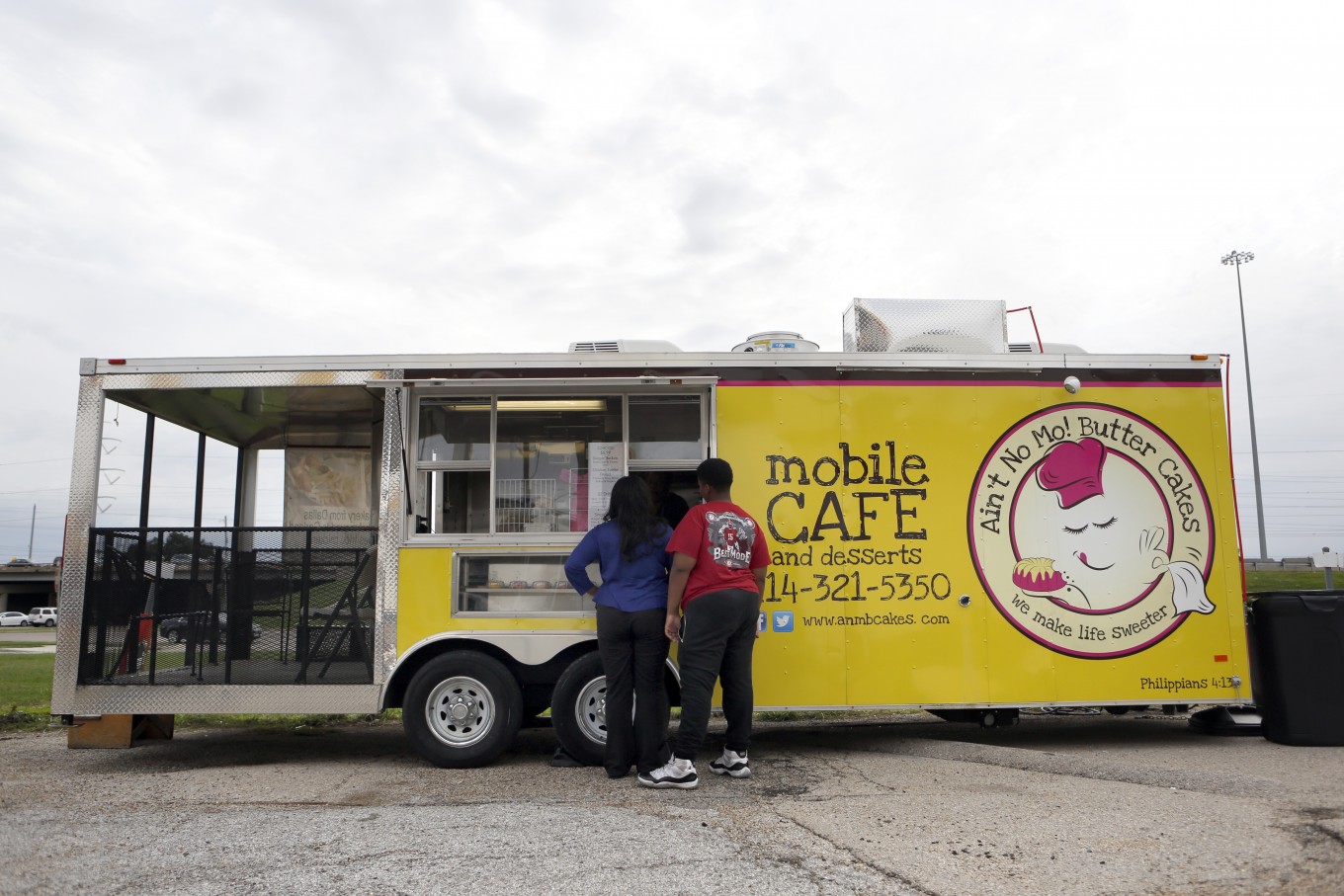 Most families worry about spending too much on gifts or travel over the holidays. Some family businesses rely on the holidays as a lifeline when revenue has been flat. Quincy and Sheri Brown hope for the best this season — because they don’t have a plan B.

It’s a dreary afternoon in Garland. The sky is gray. It’s starting to drizzle and traffic is stop-and-go long before rush hour begins.

Inside Quincy and Sheri Brown’s catering trailer, parked at a Shell gas station, the mood is much lighter.

It might be noisy inside their generator-powered mobile kitchen, but it’s warm and toasty. And Sheri’s double cheeseburgers make the whole place smell like heaven.

While his wife cooks, Quincy fills glasses with pink lemonade. 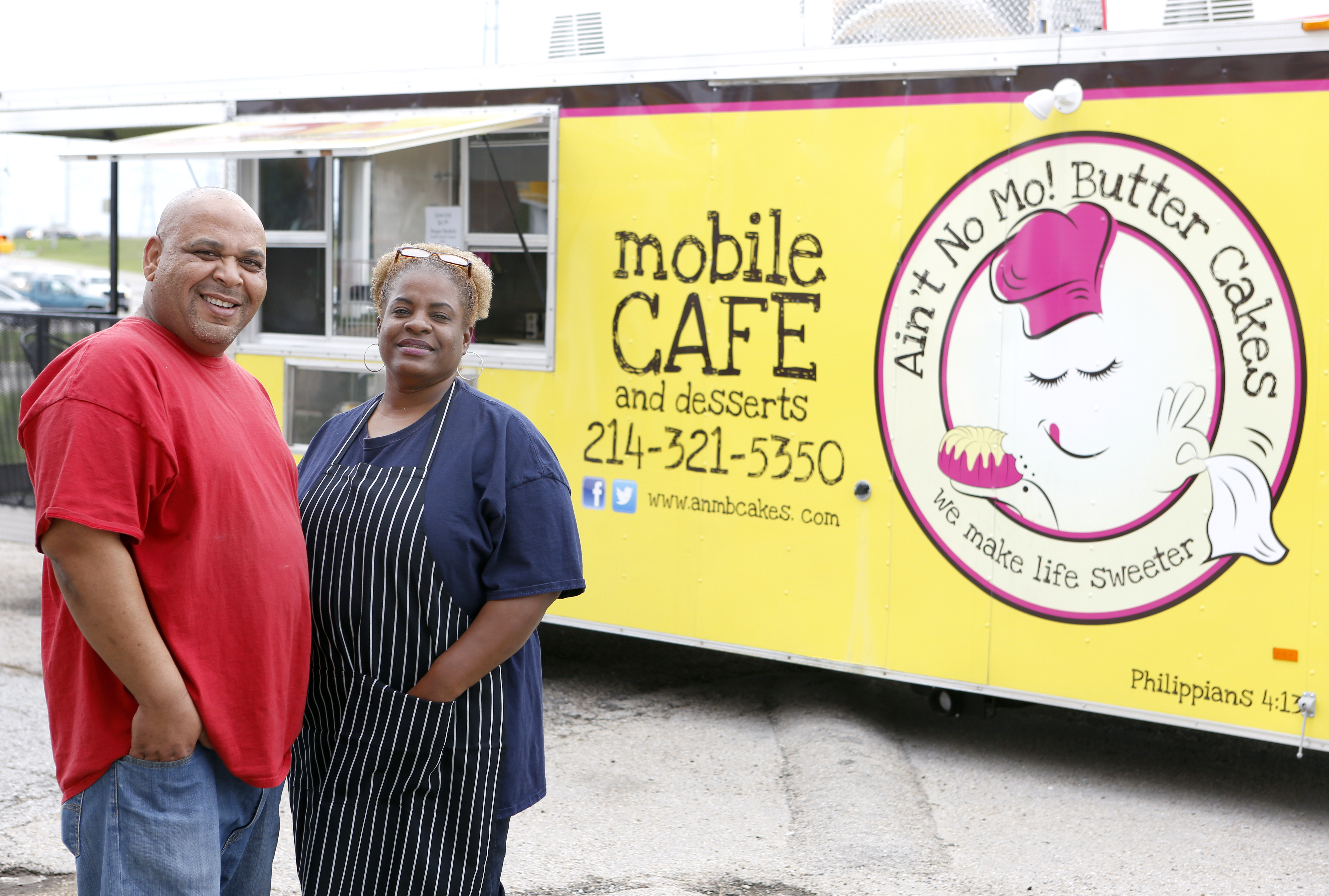 Quincy and Sheri Brown launched their business in their kitchen. Then they expanded to a food truck. Photo/Lara Solt

Serving up lunch and dinner helps pay the bills. But what really defines their business — cake. 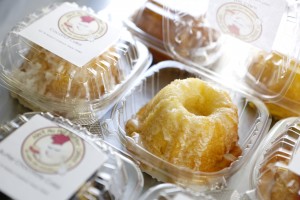 “We got butter chocolate, we got ‘sock it to me,’ coconut, lemon, salted caramel, cookies and cream,” Quincy says. “We have birthday cake, pumpkin, blueberry, we have raspberry.

“Want me to keep going?”

It’s simple and straightforward, and when people taste it:

And my husband said, ‘Just go bake something; we need to pay some bills.’ So I went and pulled my great-grandmother’s recipe out and it became a hit.
Sheri Brown, Ain't No Mo! Butter Cakes owner

They started their business in 2001. Quincy had just left his job at a car dealership. Then, Sheri was laid off from a local hospital. The job market wasn’t friendly after the Sept. 11 terrorist attacks, and the holiday season was looming.

“And my husband said, ‘Just go bake something. We need to pay some bills,'” Sheri recalls. “So I went and pulled my great-grandmother’s recipe out and it became a hit.”

At first, all the baking happened at home. When the cakes caught on, the business started to outgrow their kitchen. That’s when Sheri and Quincy’s young son inadvertently gave it a name.

“He was like 5 at the time, and I’m always tired, my feet are always hurting, so I told him, ‘Go answer the phone,'” Sheri says. “And so he grabbed the phone and said ‘There ain’t no mo butter cakes; my mom’s feet hurt!’ So that’s how we came up with the ‘Ain’t No Mo! Butter Cakes.’” 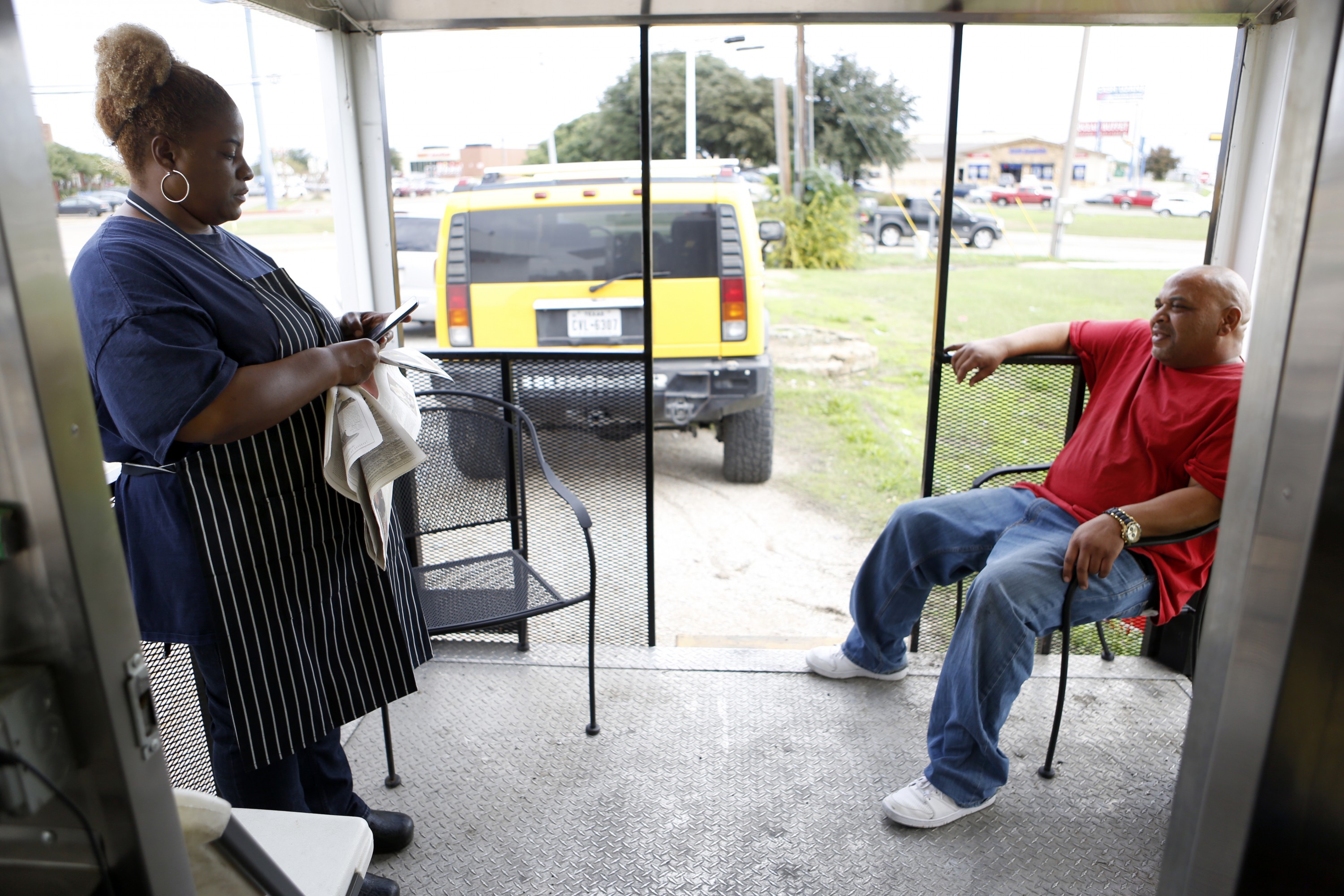 Quincy and Sheri Brown at their food truck, Ain’t No Mo! Butter Cakes, on their third day operating from a Shell gas station near Interstate 635 and Ferguson Road in Garland. Photo/Lara Solt

The Browns moved the baking out of their house through a couple of storefronts and warehouses before settling in at the Dallas Farmers Market. They stayed there for five years.

Last December, they decided to take their show on the road and buy a concession trailer — a huge move for the business, with a big price tag.

The shiny silver trailer has a bright pink and yellow custom paint job with a logo visible from a mile away. Inside, Sheri has everything she needs to grill up burgers and bake. She can bake around 100 small cakes every 20 minutes. 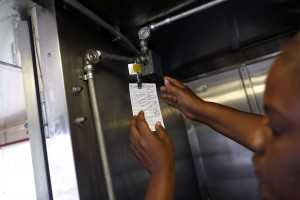 Sheri Brown works on an order at her food truck, Ain’t No Mo! Butter Cakes, on the third day operating from a Shell gas station in Garland. Photo/Lara Solt

The Browns have invested a lot in their business.  Moving into the trailer was a risk.

They’ve only made one-fourth of what they usually earn so far this year, and they’re counting on a big holiday season to make up the difference.

“We’re expecting some orders,” Quincy says. “I’m looking forward to it. It would kind of put us back on track. Because it’s been a pretty rough summer, but we’re coming out of it.”

Quincy says he doesn’t expect to turn a huge profit; he just wants to stay solvent.

“We’re actually just keeping the lights on and trying to get our kid through high school. Just like any other family,” he says. “So the holiday season means a lot to us as a small business.”

And their cooking means a lot to their loyal customers. Tara Hairston has been stalking the Browns’ Facebook page since they moved into the trailer last year.

When she saw they were in Garland, she got off work early and made the 15-mile trek from Addison to grab a burger and a mini butter cake.

“I’m from Mississippi so I know what good pound cake should taste like,” Hairston says. “And it’s like nothing I’ve ever had.” 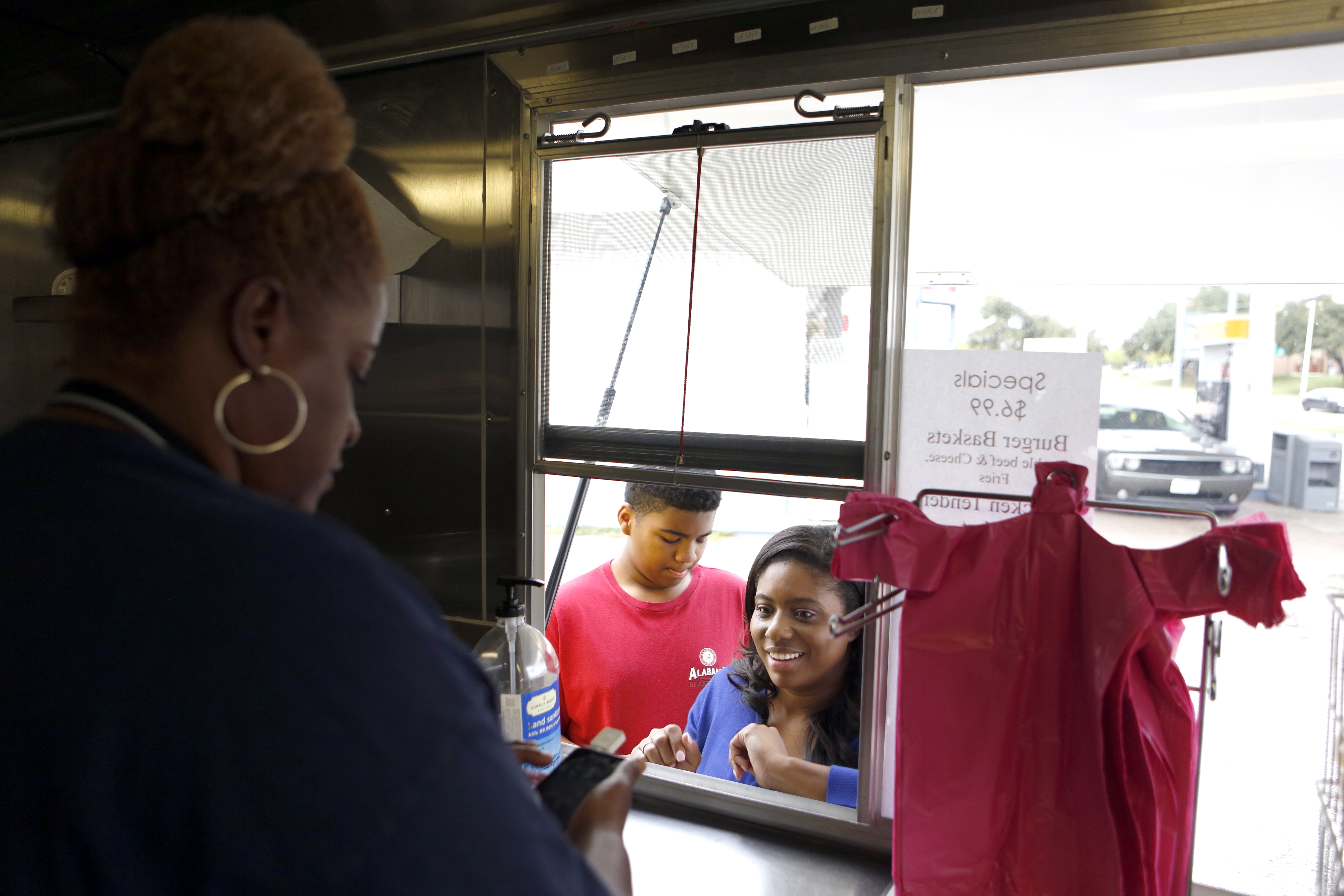 Because people react that way, the Browns know they’re on the right track. It’s just hard to survive on talent alone. It’s been a down year for their business, but they have no plans to call it quits.

“We don’t have a plan B; we’re all in,” Quincy says. “We’ve invested everything that we own and all of our energy and efforts are invested in our business. We live, sleep and eat what we do. We breathe this business. This is us.”

That deep devotion is something Quincy and Sheri hope you can see and taste when customers swing by their pink and yellow trailer.

We don’t have a plan B; we’re all in. We’ve invested everything that we own and all of our energy and efforts are invested in our business. We live, sleep and eat what we do. We breathe this business. This is us.
Quincy Brown, Ain't No Mo! Butter Cakes