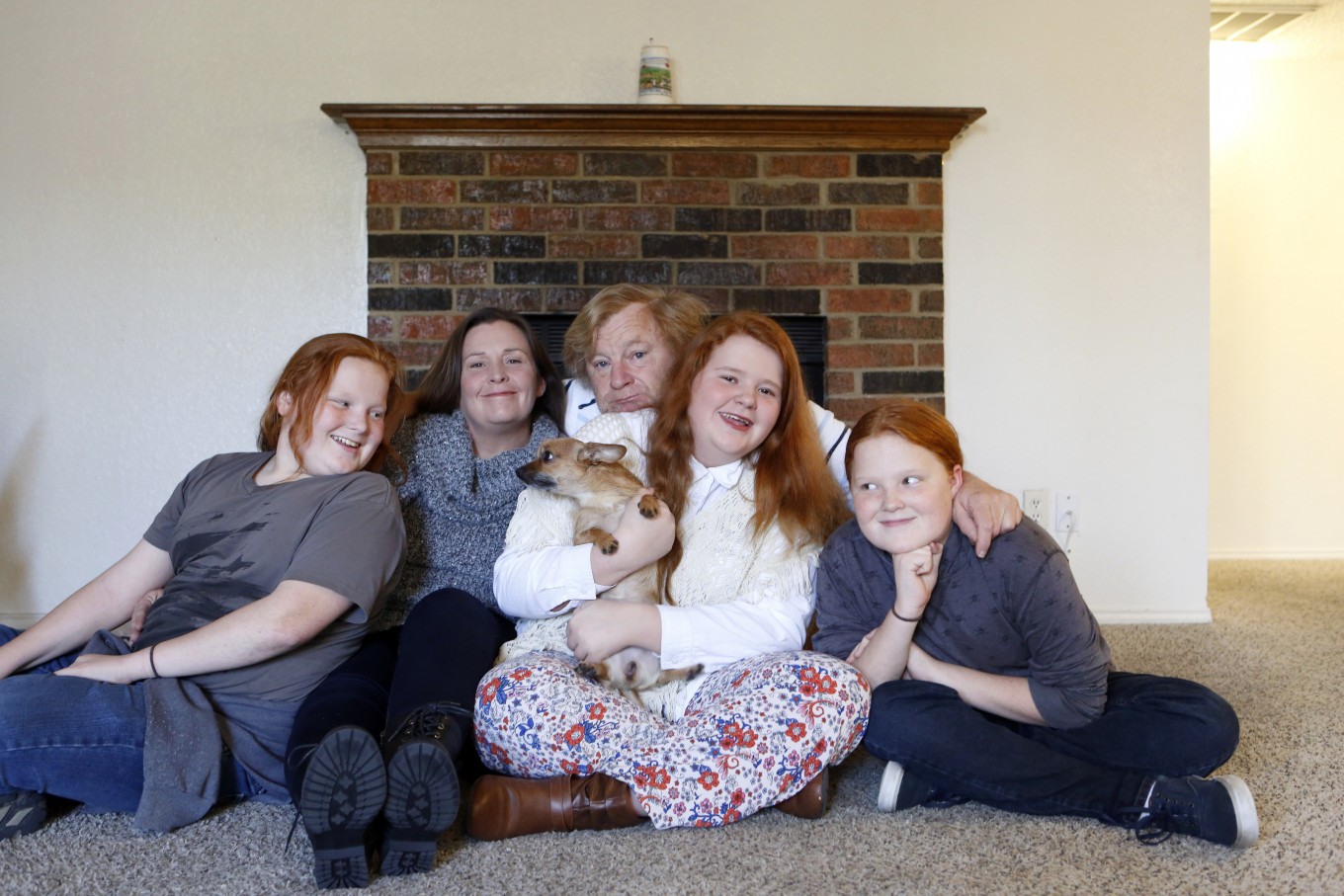 The Rosenheim family has moved into an apartment in North Richland Hills. Photo/Lara Solt
The KERA Radio story

One North Texas family is getting a big gift this holiday season: Waking up Christmas morning in an apartment, instead of an extended-stay hotel. The Rosenheims are climbing out of homelessness and starting from scratch this season. 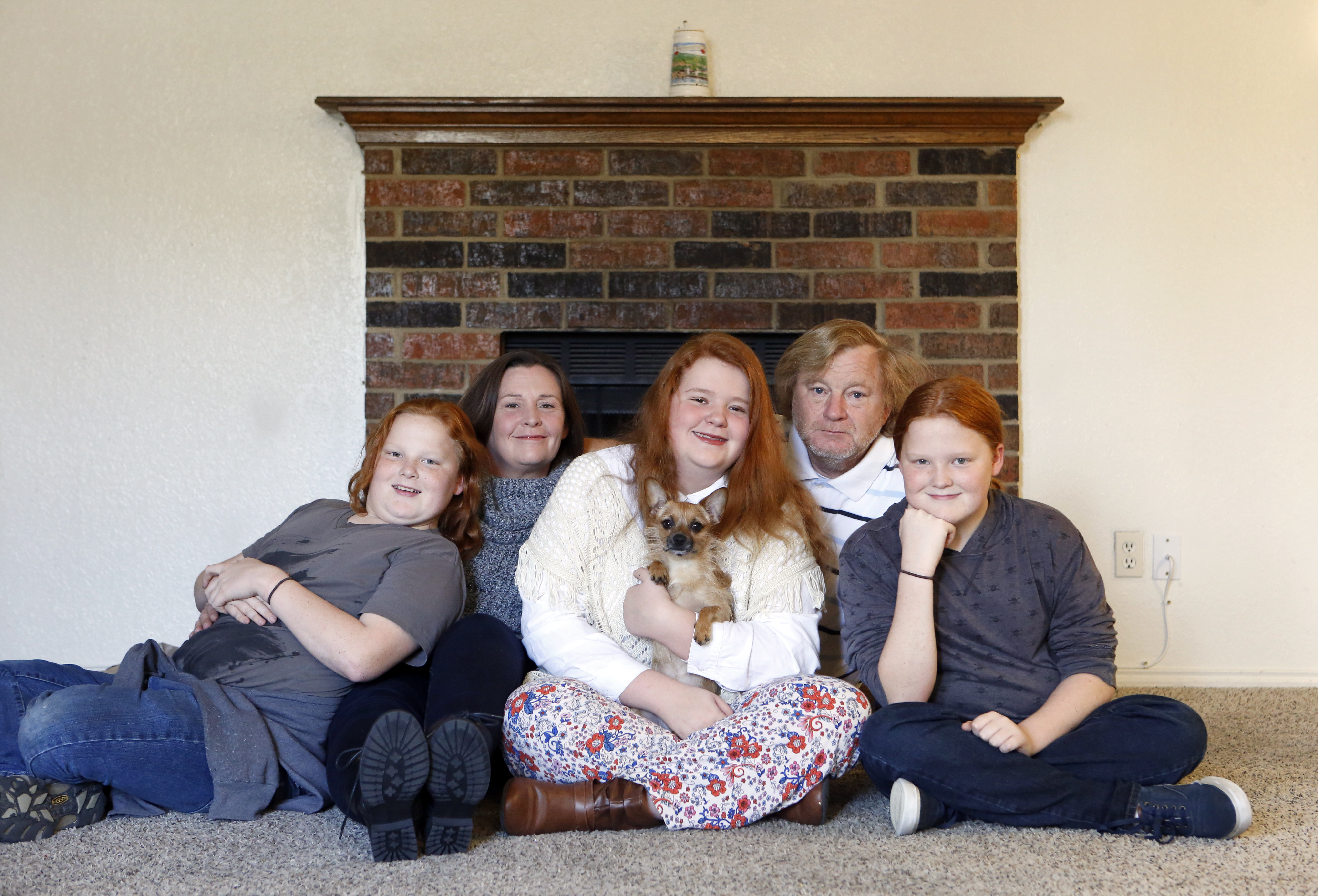 After three years of living in motels, the Rosenheim family just moved into a three-bedroom apartment. Parents Belinda and Dave with their children, Allison, Benjamin, far right, Tony and their dog, “Little.” Photo/Lara Solt

The Rosenheims’ dog is a tiny, scrappy Chihuahua Yorkie mix with a bark that doesn’t quit.

Appropriately named “Little,” she guards their apartment with friendly ferocity. She became part of the family over the Fourth of July weekend, during a trip to Galveston — a trip the Rosenheims decided to take without booking a place to stay. 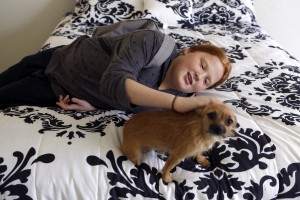 “There was nothing. Ironically, there were no hotels,” Belinda Rosenheim said.

Ironic because Belinda, her husband Dave and their three kids were living in a North Texas hotel at the time, and had been for the better part of three years.

Galveston was supposed to be a much-needed change of scenery, and now, there was no hope of spending the night. They’d have to turn around and drive back.

That’s when someone walked by with a box of puppies.

“And so Dave pulls me off to the side and says, ‘There is no way we can get a hotel. I’m thinking we should get one of these puppies.’ So that’s how Little joined our family.”

“Lots of drugs. Lots of stealing and theft and making a living not necessarily in an honest way. And that goes on and on and on.”
Dave Rosenheim, describing extended-stay hotel life

The Rosenheims lived a typical middle class life for years. Dave, a veteran who was treated for post-traumatic stress disorder after he came back from the first Gulf War, had a well-paying career in aerospace. Belinda was a stay-at-home mom. 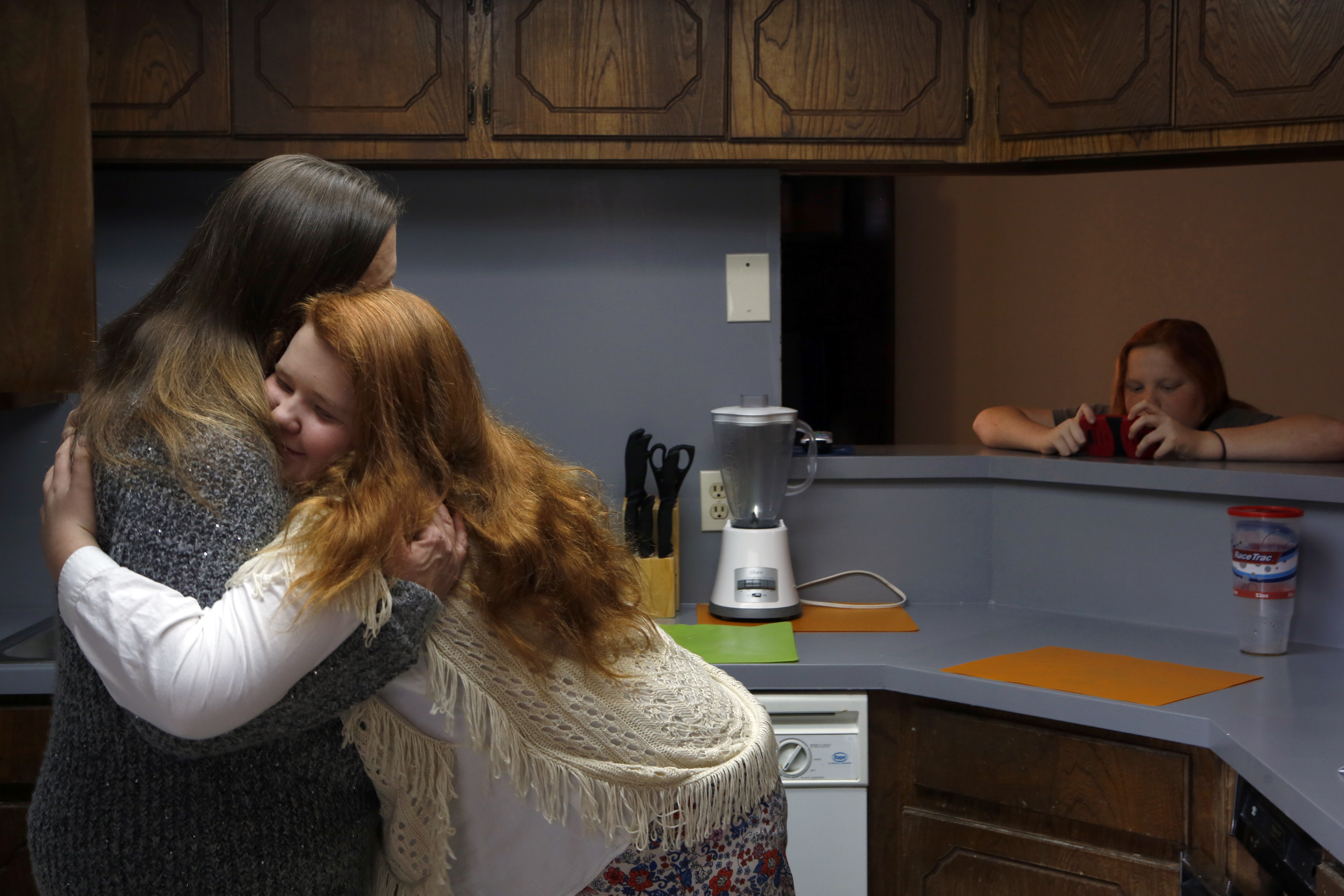 In the kitchen, Belinda gives her daughter Allison, 14, a hug as Tony looks at his phone. Photo/Lara Solt

The Rosenheims went from comfortable apartment living with money in the bank to a drained savings account and an eviction.

Dave said life was tough for their kids as they bounced around from hotel to hotel. Daughter Allison is now 14, and twin sons Tony and Ben are 12.

“Lots of drugs. Lots of stealing and theft and making a living not necessarily in an honest way. And that goes on and on and on,” Dave said about the hotels where they lived.

Spending the holidays in an extended-stay hotel was grim. There was no place to hang the stockings. The only gifts the kids got were donated.

The Rosenheims used to worry about things like what American Girl doll Allison would find under the tree. Spending months at a time in hotel rooms changed Belinda’s priorities dramatically.

“The first one is feeding them, and the second one was saving them from being humiliated,” Belinda said. “I didn’t want them to stand out from everyone else. I wanted them to fit in.” 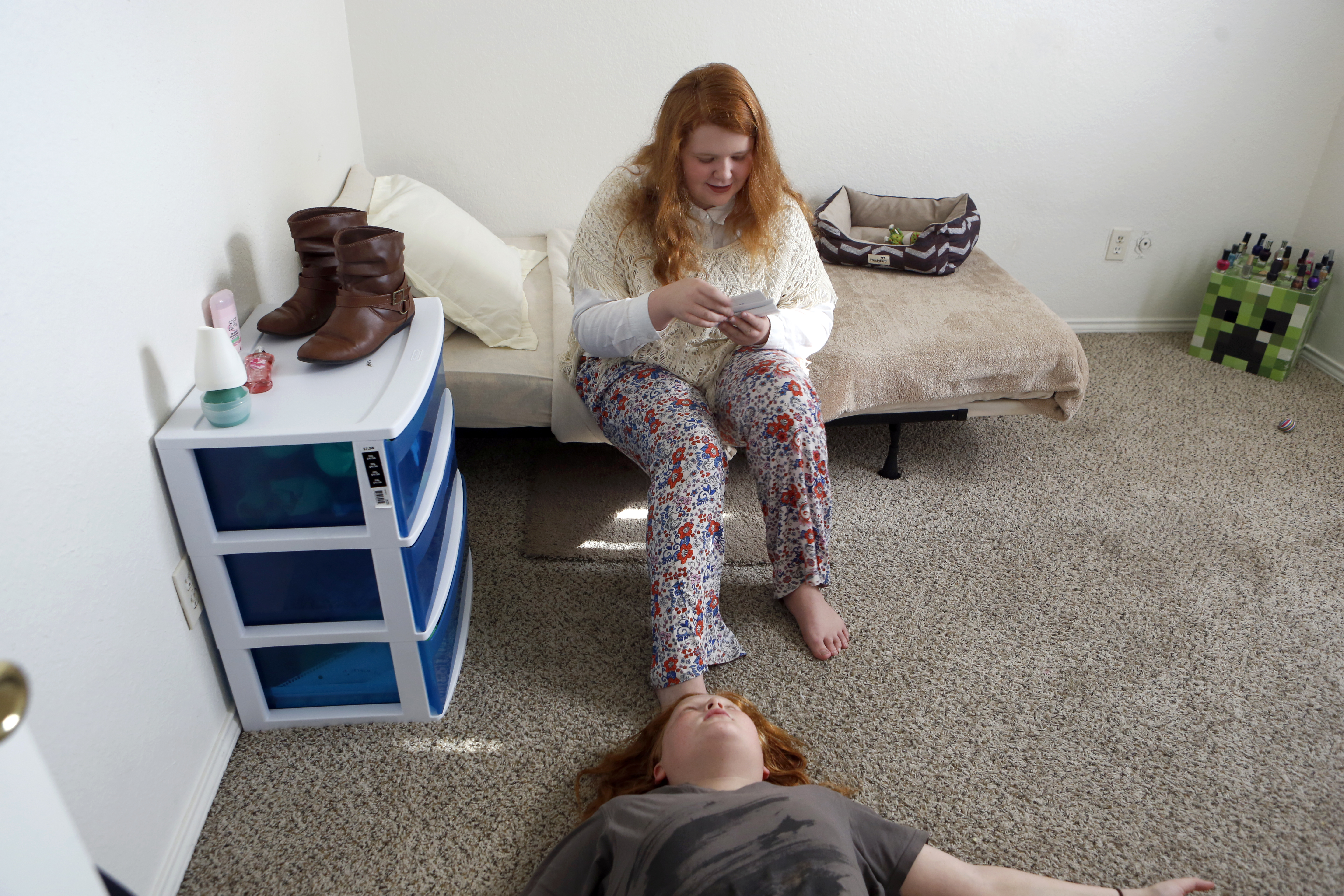 Allison Rosenheim, 14, sorts out flashcards while talking to her brother, Tony, 12, in her room. Photo/Lara Solt

That meant Belinda tried to keep their clothes in decent shape. She’d take them to the library after school to use the computer, and they’d spend Saturdays at the dollar movie theater.

The holidays were harder to pull off.

Dave has had a steady job at Fitz Aerospace in North Richland Hills for close to two years now. He makes less than half of what he used to earn. He’s moved from an office to a warehouse, working mostly overnight shifts. He picks up as much overtime as he can, treating metal parts for corrosion.

“The first one is feeding them, and the second one was saving them from being humiliated. I didn’t want them to stand out from everyone else. I wanted them to fit in.”
Belinda Rosenheim, on how priorities for her kids changed when they lived in hotels

Reeling From An Eviction

The Rosenheims learned quickly that while they may have employment, income doesn’t equal housing. With an eviction in their rental history, they couldn’t find a place to live.

Belinda said they wasted hundreds of dollars on application fees.

“They would take our money, and turn us down,” she said.

That happens a lot. Otis Thornton with the Tarrant County Homeless Coalition says the rental market is so tight that many property owners turn away people with evictions.

“The biggest concern is for folks who have long periods of time without housing,” Thornton said. “Landlords can just be more picky when the vacancy rates are very low.” 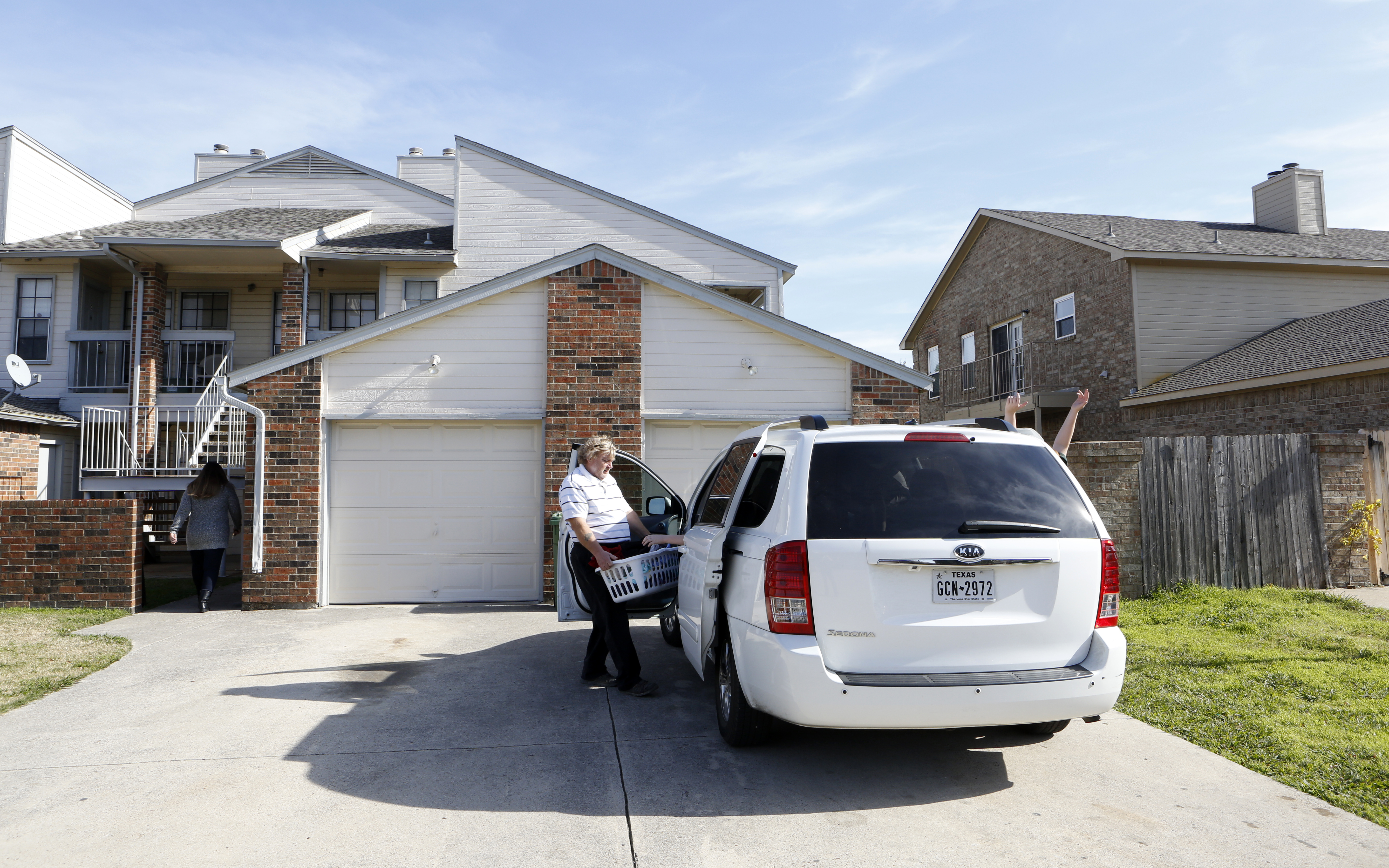 Dave Rosenheim carries the laundry to the family vehicle to be taken to the laundromat. Photo/Lara Solt

In Tarrant County, 6,300 people were homeless at some point this year. In the Mid Cities, where the Rosenheims live, there aren’t many shelters, so many people end up in extended-stay hotels.

Thornton said there’s never enough affordable housing in North Texas, and what is out there gets snapped up by renters who are more financially qualified.

“After the recession and the housing market bubble popped, a number of folks who were previously homeowners became renters,” he said.

“Homelessness is traumatic, especially for children,” he says. “We want to reduce the length of time that folks are in shelters, or on the streets, or even in a motel as much as we can so that we minimize the trauma and its impacts on their development.”

Dave and Belinda were desperate to get out of extended-stay hotel life, but they couldn’t — until just a few weeks ago.

After years of combing Craigslist, sifting through newspaper ads and scouting “For Rent” signs, the Rosenheims were finally approved to lease a modest apartment in North Richland Hills. They moved in on Dec. 5. 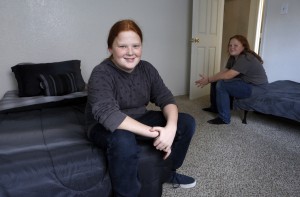 Twelve-year-old twin boys Benjamin Rosenheim, at left, and Tony share a room — and each have a “twin” bed. Photo/Lara Solt

“This is a whole new lifestyle. It’s like a family makeover,” Belinda says. “We have a kitchen; we have a dining room; we have bedrooms,” Belinda said.

Their new landlord has them on a month-to-month lease for now. They had to pay a security deposit, pet deposit and two months rent upfront.

“We paid $3,500 to get in the door,” Dave said. “I would pay that twice to see them wake up in their own bed. Because for the last several years, they’ve woken up in someone else’s bed.”

Those beds are about all that’s in the Rosenheims’ apartment right now. The family eats dinner at a card table. Most of their clothes are stacked in plastic storage bins.

This Christmas, there will be a tree, stockings full of candy, and a few gifts for the kids, too.

It’s the first time the Rosenheims have been able to say that in years. 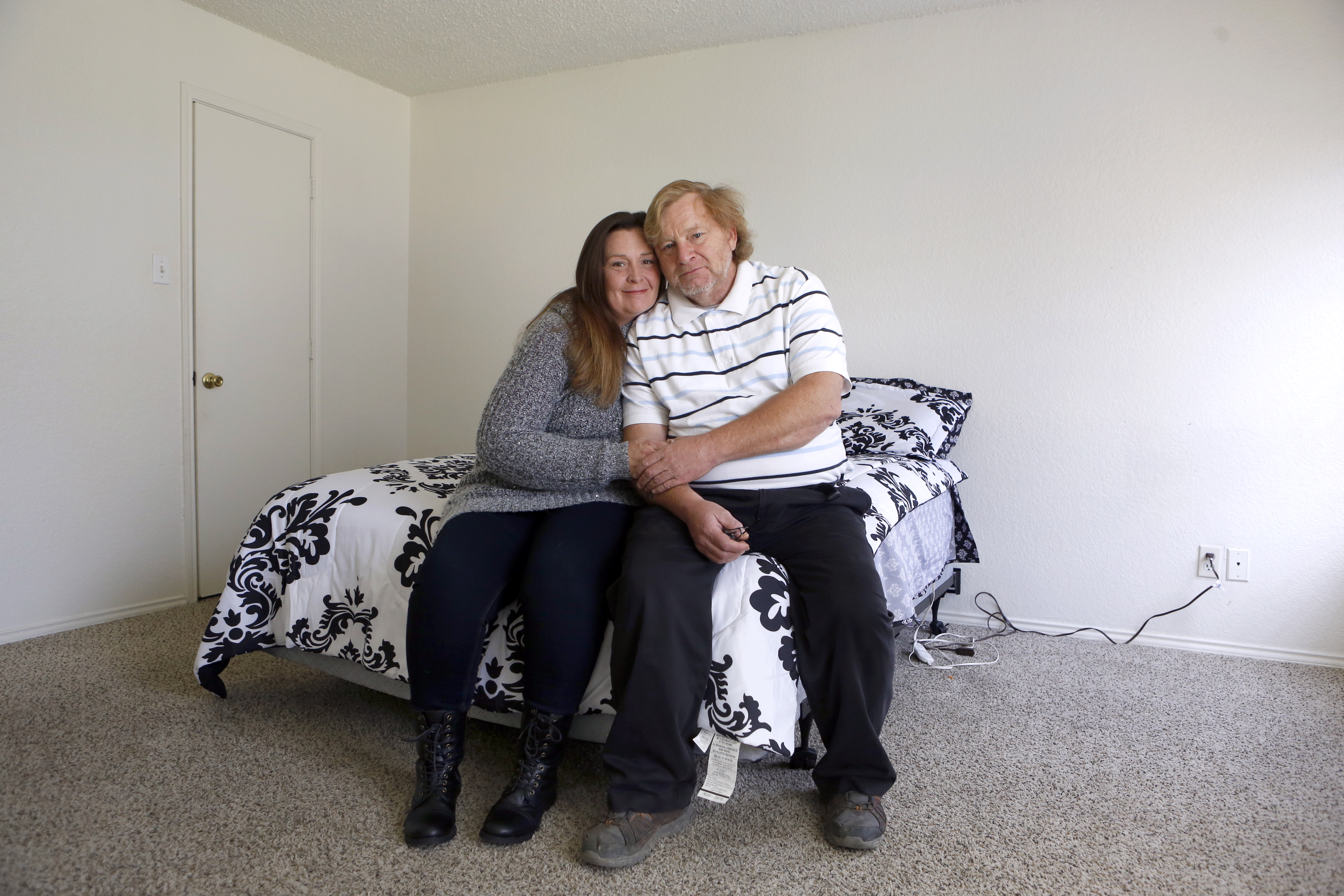 After three years staying in motels, the Rosenheim family just moved into a three-bedroom home where each child has their own bed. Parents Belinda and Dave in the bedroom they share. Photo/Lara Solt