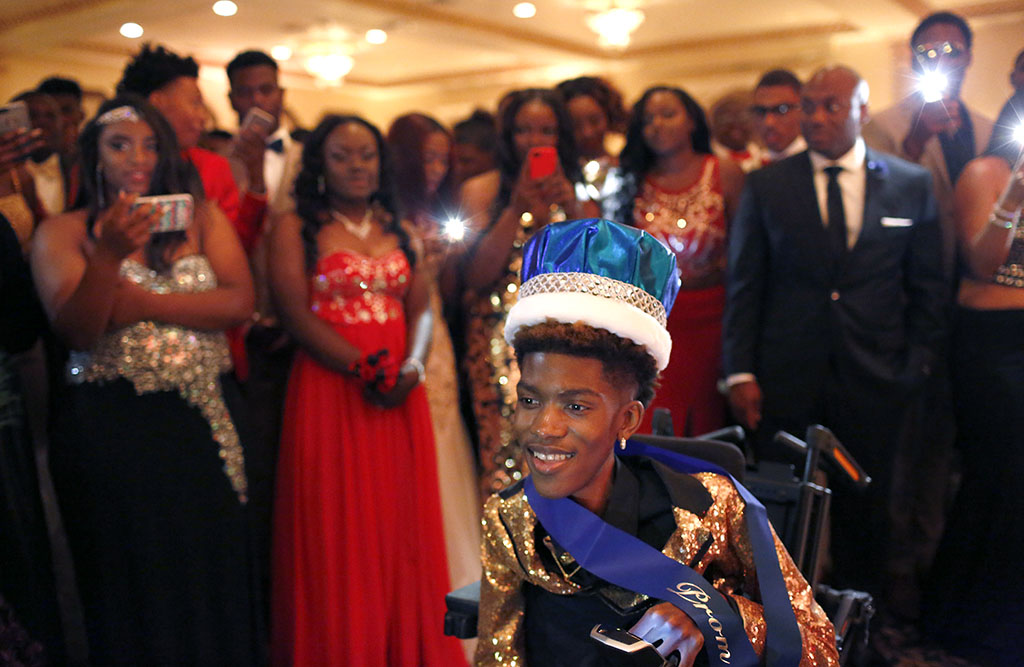 Chance Hawkins is crowned prom king at the Dunbar High School prom in Arlington on May 6. Photo/Lara Solt
The KERA Radio story

Chance Hawkins, 19, was born with a rare genetic degenerative disease. He’s getting ready to graduate from Fort Worth’s Dunbar High School, concluding a journey that’s been filled with obstacles — and rewards.

‘You have a smiler’

Earlier this month, Chance Hawkins’ family and friends thought they’d lost him. Chance wasn’t sure he’d live to see another day either.

Chance was in the nurse’s office at Dunbar High when he passed out. Phlegm had gotten stuck in his throat, and he couldn’t cough it up.

Chance’s mom, Clarice, was there trying to help. When he stopped breathing, she started screaming. His older brother Robert was there, too. Students and teachers gathered and prayed nearby.

Dunbar High principal SaJade Miller walked into the nurse’s office to see what was happening.

“I see the nurse giving Chance chest compressions and that was one of the most difficult moments of my career in education because I speak to Chance every day,” Miller says. “He is sort of our hero and to see that …”

When Chance woke up, he was in the ambulance on the way to a hospital. A paramedic on one side, his mom on the other.

Chance broke out in a big smile.

He told his mom that he loved her.

Clarice Boyd thought he was gone.

“He’s paying a sacrifice that none of us will ever be able to understand.”
SaJade Miller, Dunbar High School principal

Chance and younger brother Louis were born with Duchenne muscular dystrophy. It affects one in 3,600 boys. Three of Chance’s uncles died from the disease.

Over time, muscles progressively weaken. Many die in their 20s. With advances in medicine, more are living into their 30s and even 40s.

For Chance, graduation next week will be a huge milestone. Miller, the principal, calls Chance an inspiration.

“We complain about the mundane things, not realizing that he’s paying a sacrifice that none of us will ever be able to understand,” Miller says. “So, this year and this graduation, this prom is really a celebration for us for Chance, because you know, you never know when your last day is. And you never how your situation could turn at an instant.” 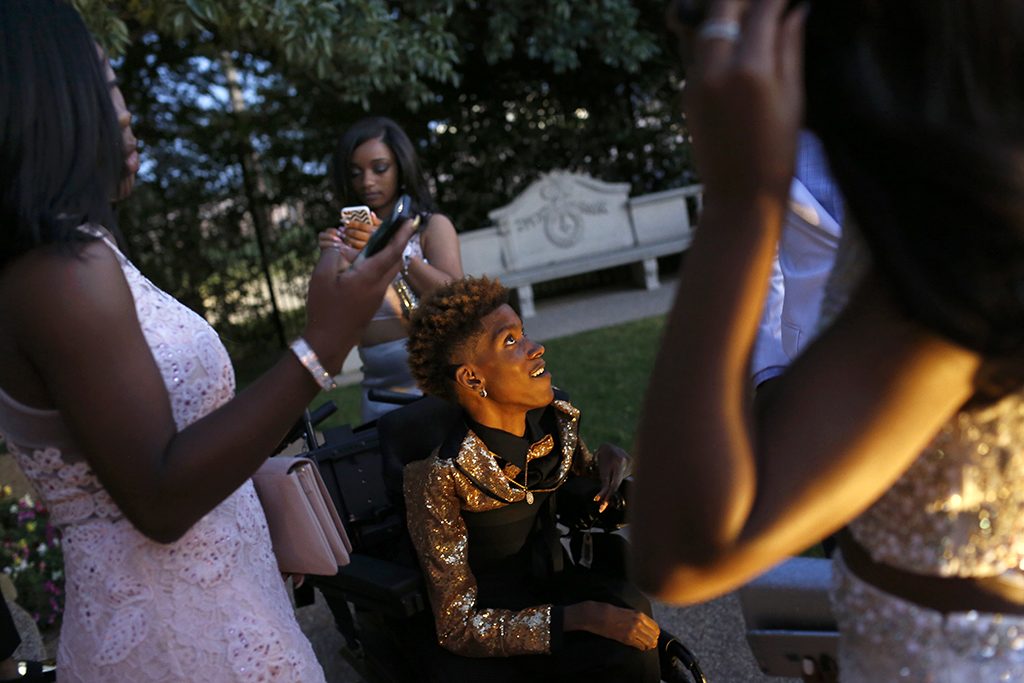 Four years ago, the thought of graduation seemed daunting. In eighth grade, Chance failed the STAAR test at Dunbar Middle School. So his mom briefly moved him to Cassata, a small Catholic school. Soon, though, he was back in public school at Dunbar High.

At first, the crowded cafeteria seemed intimidating. The school had 810 students – four times the number at Cassata. Now, Dunbar High is nearing 900.

On the academic side, Chance struggled. He eventually got an aide to help him take notes and make sure he understood assignments. Teachers were flexible, letting the aide tweak lessons.

Today, he has no trouble finding friends in the cafeteria, and he’s on track to graduate.

All Chance can think about are the big moments in a senior’s life, like graduation — and prom.

A couple of Saturdays ago, Chance and his sister Kenya spent the afternoon getting ready for their dates. She’s a senior, and a jock. No one could remember seeing her in a fancy dress or heels before, which left Chance stunned.

“I can’t … I can’t talk,” Chance says. “She look amazing. My sister. You’ll never see my sister never in a million years wear a dress like that.”

He slipped on a gold-sequined, tailor-made jacket; the top of his hair highlighted auburn. His inspiration for the look: Michael Jackson.

Together, he and his date, Tailor Brooks, made a stylish entrance to the big party at an Arlington ballroom.

Around 9:30 p.m., the music stopped and the prom king candidates lined up. Chance was one of them. Classmates formed a half-circle to get a closer look.

A royal blue crown was placed on Chance’s head. A huge smile spread across his face. His classmates clapped and cheered, snapping pictures with their phones.

For a kid who started the week on the verge of death, being named prom king was a moment to remember.

After Chance won the crown, the emcee at the prom told students on the count of three to repeat a chant.

The Class of ’17 Yearbook

Next step: “I’m going to try to pursue my music and acting career at the same time. I’m going to start a YouTube channel or blog, anything to keep going. I’m going to [keep] recording and writing and try to see where it gets me.”

Dream job: “I would like to be a lot of things. Well, my dream job — I would like to own my own restaurant. Soul food. A restaurant with not only just soul food. I probably like Brazilian food, you know, get different kinds of food from all over.”

Favorite quote: “Dream as if you will live forever.” – James Dean

Chance Hawkins, Through The Years

A Day In The Life Of Chance Hawkins