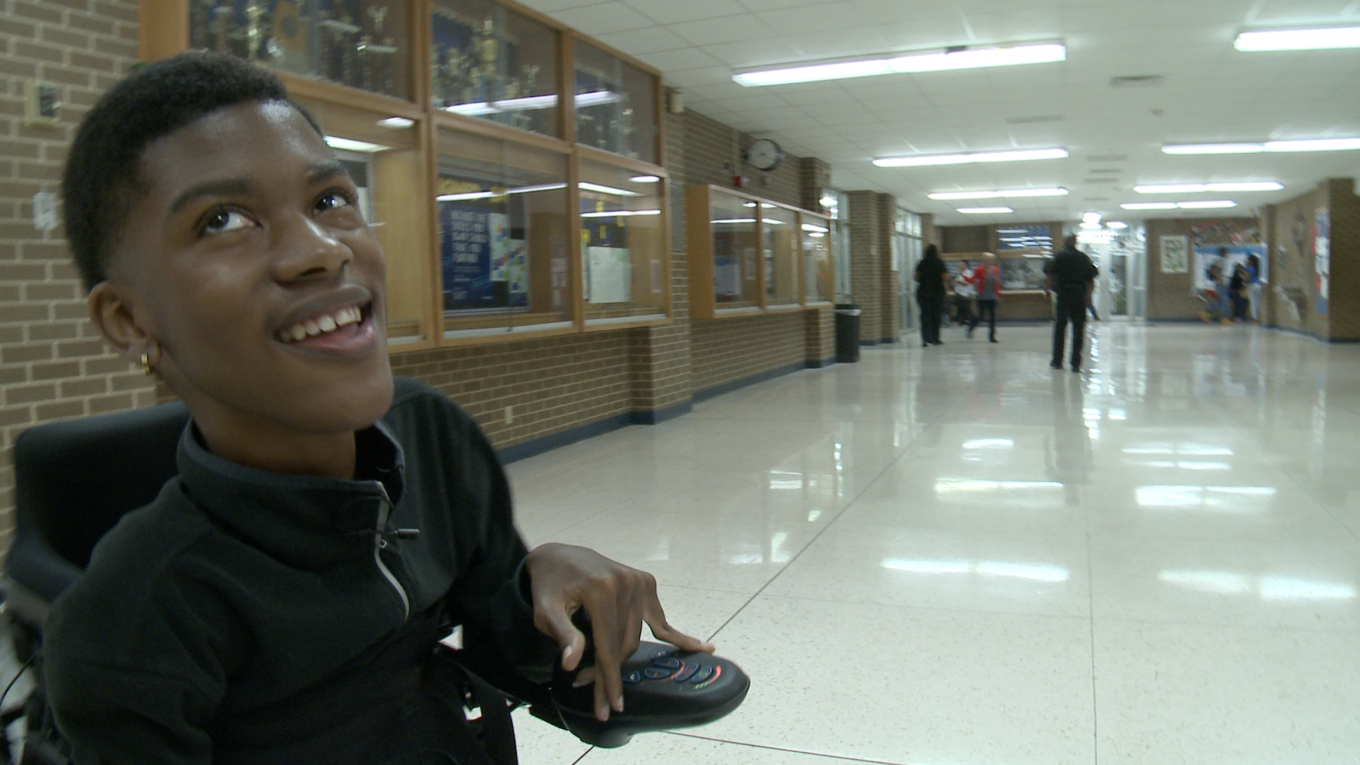 Chance Hawkins in the hallway of Dunbar High School in Fort Worth. Photo/Mark Birnbaum
The KERA Radio story

When we first met Chance Hawkins, he was getting ready to start ninth grade at Fort Worth’s Dunbar High School. He’s now a junior. He has all the junior year challenges of his classmates, but his personal challenge is even bigger. He’s a battling a degenerative muscle disease. And that makes life more complicated.

Chance will be the first to tell you that he doesn’t dwell on what he can’t do. 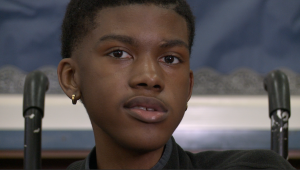 “I know nobody in this world is perfect, and God didn’t it want it to perfect,” Chance says. “Because if it was perfect, everybody would just feel like ‘Oh, we all perfect, so we all have nothing to worry about.’”

Chance has Duchenne muscular dystrophy, a rare genetic disorder that affects one in 3,600 boys. Over time, the muscles progressively weaken. In most cases, death comes by age 25.

In his family, Chance isn’t alone in his battle.

His younger brother, Louis, has Duchenne, too. Chance, like everyone else, calls him Junior.

“I’ve been through this, so I know everything. I know what people are gonna say. I just try to keep him to stay strong, to just don’t worry about what people say,” Chance says.

VIDEO: A Day In The Life Of Chance Hawkins

SCHOOL: A SOCIAL OUTLET AND A STRUGGLE

Chance glides down the hallways at Dunbar in his motorized wheelchair.

The teachers all know him. Students call out his name. He smiles. He likes the attention.

School is Chance’s social outlet. He likes arriving early, so he can have “cafeteria time.” His favorite topic — music. He wants to record, like Chris Brown or Tupac. 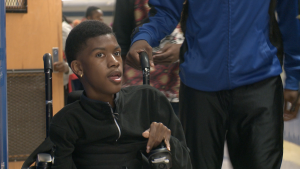 A student pushes Chance Hawkins down the hallway at Dunbar High in Fort Worth. Photo/Mark Birnbaum

“I hang out with everybody,” Chance says. “‘Cause you know, I’m like, I’m the popular kid, so anybody who wants to sit with me, I’ll be with them. Yeah.”

On the academic side, Chance has his struggles. He hasn’t passed the end-of-year exams for English 1 or 2. And that makes him mad.

If Chance doesn’t clear those hurdles, he’ll have to prep and retake the tests.

He has the help of an aide — Reuben Vaughn, who was assigned to Chance at the beginning of the school year. 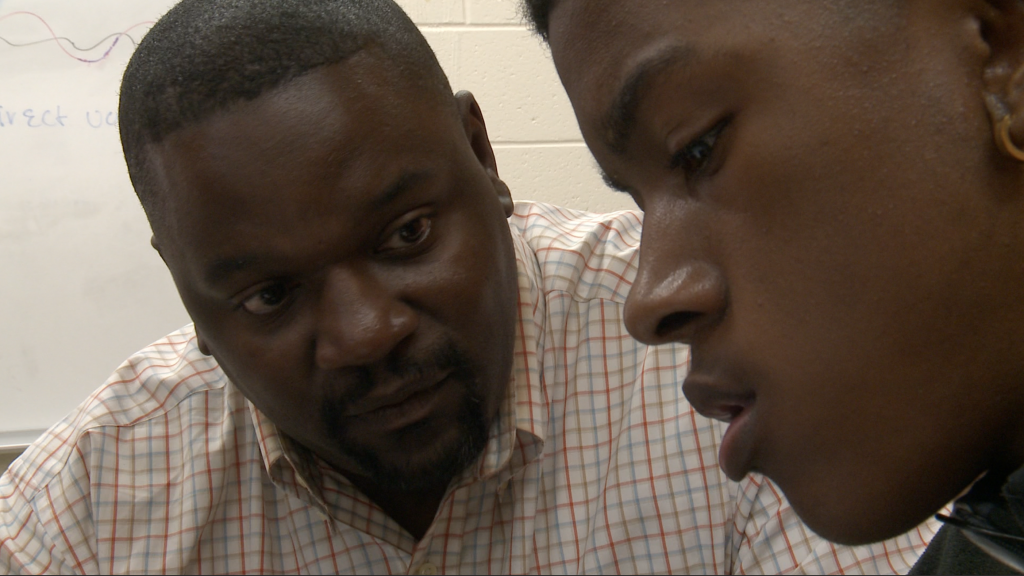 Chance Hawkins and his aide, Reuben Vaughn, during Algebra II at Dunbar High School in Fort Worth. Photo/Mark Birnbaum

The former college football coach sits beside Chance, helping him take notes and making sure he understands the assignments.

“He wants to succeed. I can see that,” Vaughn said. “He may want to act like some students do, like ‘I don’t really care about this.’ He cares. You can see it in his reaction. You can see it sometimes in his disappointment if he doesn’t get something right away.”

He said working with Chance has had an impact on him, too.

“It allows me to be a little bit more patient with him than probably what some people may or may not be,” Vaughn says. “Some people probably wouldn’t want to work with him (for whatever reason) because they don’t want to have to deal with that.”

DUCHENNE IS A FAMILY AFFAIR

Chance lives with his mom, dad and four siblings in a modest home in South Forth Worth. The house next door is boarded up. 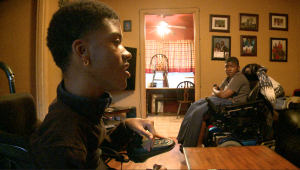 Chance Hawkins and his younger brother, Junior, often hang out at home on the weekends. Photo/Mark Birnbaum

His mom knows all too well the challenges of raising boys with Duchenne. Clarice Hawkins had three brothers who died from the disease.

Life can get overwhelming.

One brother lived to age 15. Another, 14. A third died at 13. So Chance’s 18th birthday this month was a huge milestone.

As Chance gets older, the weekends can be tough because he isn’t able to leave the house much, he said. He said he’d be happy just hanging out at the mall, riding around in his wheelchair just to get to out.

Chance said if the family had a van that could accommodate them, he could go to more places. He said his mom has talked about it for awhile, but she tells him to be patient.

“On the weekend, I’ll be very sad because … all other my other siblings, they get to go anywhere they want to go,” Chance says. “I’m just stuck at home with my little brother, and we both can’t really do anything.”

Hawkins said things were different when her mother was raising kids.

“I never recall my mom taking my brothers to the doctors as much as I take my kids to the doctor. I never recall her being up through the night,” she says. “Ordering nurse supplies or having the help that I have. I mean I’m just blessed that I’m surrounded by a lot of love, a lot of family.”

“I want to go into acting, ’cause … I’m really funny. Everybody loves me.”
Chance Hawkins, high school junior

Unsure About The Future

At Dunbar, Rondy Dunn teaches U.S. history. He says he’s been trying to build Chance’s confidence by telling him he can go to college.

Dunn said college changed his life, and he told Chance it will change his life, too.

“The majority of college is reading and understanding what you read and then being able to regurgitate it in any class,” Dunn says. “He can do that very well now. So I’m saying, ‘Dude, you can go to college.’ And I keep pushing him – ‘Where are you going to go to school? When are you going to apply?’ It’s my job not to allow him to fail himself.”

Chance isn’t sure about college. What he’d really like to do? Acting school.

In the meantime, there are those musical dreams. This summer, he plans to record some tracks. One of his inspirations? A rapper who died two decades ago: Tupac Shakur. 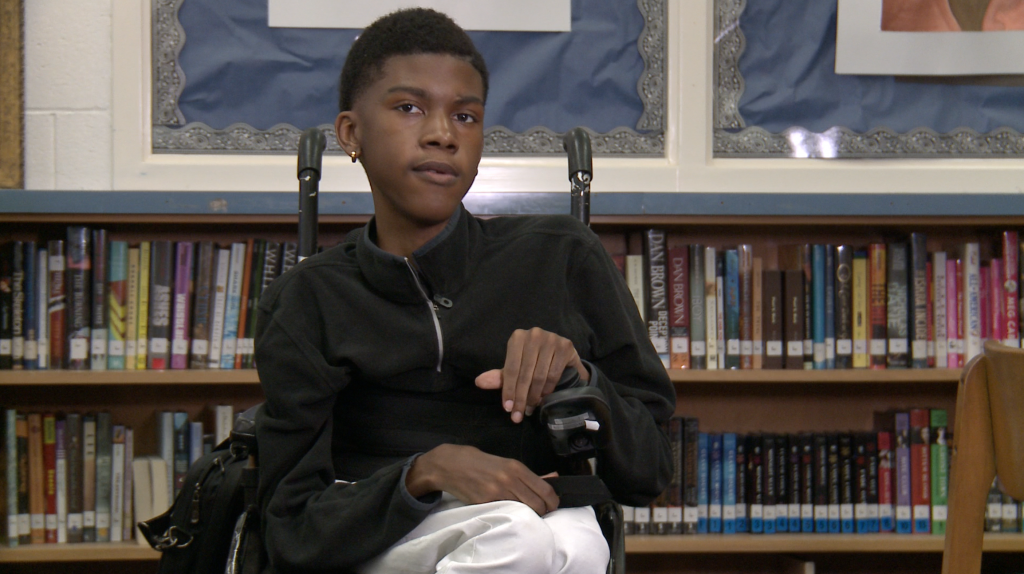 She Dreams Of College – And Passing Geometry Class