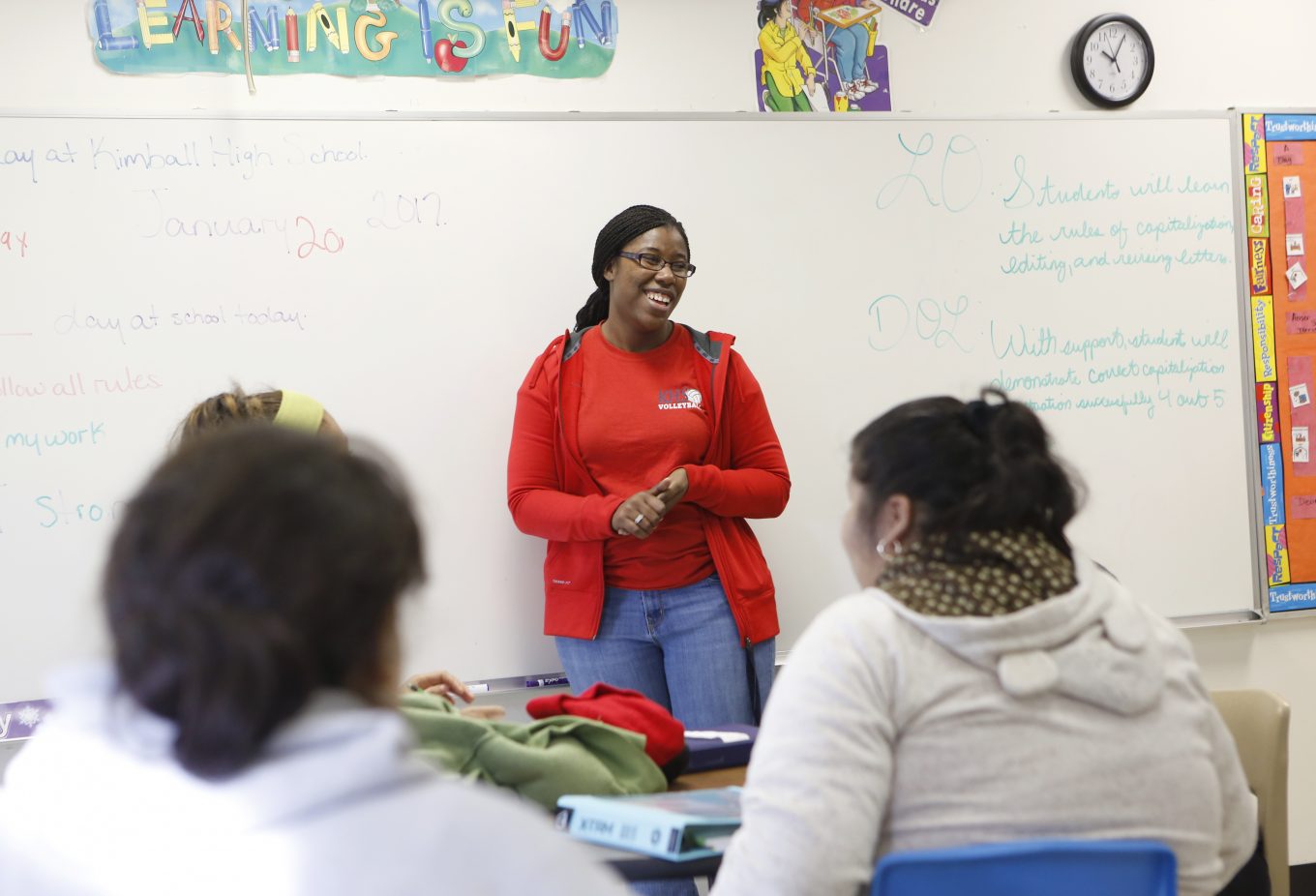 Monica Gray Rhinehart, a 2005 graduate of Kimball High, is now a teacher and coach at the Dallas school. Photo/Lara Solt

For decades, education in North Texas was reshaped by white flight. Today, the drivers are diversity and economic flight. This educational toolkit will address those factors as well as the disparities between students of color and their white counterparts.

Due to the mature subject matter, in some materials, the toolkit is better suited for students in upper elementary through high school.

The lesson plans and teaching resources provide a historical look at race, poverty and education in America and explore the issues of race and poverty in America’s schools today.

Timeline: Landmark Desegregation Cases
Legal rulings breaking down the walls of segregation have reshaped the makeup of America’s public schools in ways that continue to change and resonate throughout the nation’s school districts. Explore these historic cases in more detail in this interactive timeline. Source: Education Week.
The Power and Importance of Precedent in the Decisions of the Supreme Court
In this lesson, students will examine the role of precedent in Supreme Court decisions. Source: PBS/WNET; Grades: 9-12.
With Liberty and Justice for All
This lesson references the 1940 case of Minersville School District v. Gobitis. Note: The plaintiffs in the case were William and Lillian Gobitas, but a clerk’s spelling error changed the case’s official name above. Therefore, when referencing the Gobitas children, the lesson uses the correct spelling of the family name, but when referencing the court case, it uses the spelling used in court documents. Source: PBS/WNET; Grades 9-12.
Documenting Brown 1: The Fourteenth Amendment
The Fourteenth Amendment to the U.S. Constitution granted equal protection under the law. Soon after it was ratified, and for decades to follow, this equal protection clause would be used to argue that segregation was unconstitutional. Source: PBS LearningMedia; Grades: 6-12.
How History Affects Supreme Court Decisions and Supreme Court Decisions Affect History: A Look at the Fourteenth Amendment
Why were the promises made by the post-Civil War amendments so important? Students will analyze and compare important Supreme Court decisions involving the Fourteenth Amendment and civil rights. Source: PBS/WNET; Grades: 9-12.
Roads to Memphis: Dr. King Launches the Poor People’s Campaign
In 1968, Martin Luther King launched the Poor People’s Campaign to bring people together across racial lines to fight systemic poverty. The video is from “American Experience: Roads to Memphis.” Source: PBS LearningMedia; Grades: 7-12.
Brown vs. Board of Education and School Desegregation Teaching Resources
This lesson plan was created to commemorate the 63rd anniversary of the landmark U.S. Supreme Court decision Brown vs. Board of Education on May 17, 2017. Source: National Education Association; Grades: K-5, 6-8 and 9-12.
Frontline: The Return of School Segregation in Eight Charts
Changing demographics and controversial court rulings have prompted a return to levels of school integration last seen during the Lyndon B. Johnson administration, as represented in this series of eight charts from Frontline: Separate and Unequal. Source: Frontline and PBS LearningMedia; Grades: 6-12.
Frontline: Separate and Unequal | School Integration
A group of citizens in East Baton Rouge, Louisiana, considers forming a new school district, inspiring a debate over the effectiveness and importance of school integration. Source: Frontline and PBS LearningMedia; Grades: 6-12.
Department of Education Finds Pattern of Inequality by Race in Public Schools
The Department of Education published a report that shows sweeping patterns of educational disparity by race in public schools across the country, including fewer advanced classes available to students of color and a disproportionately high percentage of suspensions. Source: PBS Learning Media and PBS NewsHour; Grades: 7-13+.
America After Charleston: Students Face Systemic Inequalities
In June 2015, a white gunman shot and killed nine African-American parishioners in Charleston’s Emanuel African Methodist Episcopal Church. Explore how systemic inequalities affect students in this video from America After Charleston. Researchers Shaun Harper and Margaret Simms discuss how disparities in school funding and in rates of suspension, incarceration and high school and college graduation correlate to race, and lead to other inequalities that negatively impact future generations. Warning: The beginning of the video includes footage of Walter Scott being shot in the back by a police officer. Source: PBS LearningMedia; Grades: 9-12.
Frontline: Prison State | School-to-Prison Pipeline
Experts discuss the circumstances that lead thousands of juveniles into the court system and jail each year in this video adapted from Frontline: Prison State. Source: Frontline and PBS LearningMedia; Grades: 6-12.
Stop and Frisk: The High School Senior
Students will learn about the controversial “Stop and Frisk” policy as well as how to effectively use infographics in this video and lesson from PBS NewsHour Extra. Grades: 7-12.

Reverend James Seawood grew up in the 1950s in Sheridan, Arkansas, and attended an all-black school.

The town’s main employer and landlord was a lumber mill. Following the federal mandate to integrate the public schools, the mill forced its African-American employees and tenants out of town. As the population dwindled, James’ mother became his school’s principal, janitor, and whatever else was needed.

At StoryCorps, he recalls how integration led to African Americans being forced out of his hometown, the human cost of “urban renewal” and the fate of his beloved school.

“School’s Out” online release is presented in partnership with WNYC’s Snap Judgment.

Ramon “Chunky” Sanchez was raised in a small farming community in southern California in the 1950s. As was common practice at that time, teachers at his local elementary school Anglicized the Mexican-American students’ names. Here, Chunky remembers a new classmate who proved to be the exception to the rule.

President’s Johnson’s “war on poverty” initiative sought not just to alleviate poverty but end it, in this video from American Experience: “1964.” Johnson proposed a vast legislative agenda that would attack the root causes of poverty and provide opportunity for all. Source: PBS LearningMedia.

The Icing on the Cake

Blanca Alvarez and her husband risked crossing the border to immigrate into the United States and then struggled to make ends meet. They hoped to shelter their children from these harsh realities, but Alvarez’s daughter, Connie, reveals how much children can really see of their parents’ lives — and the inspiration they draw from their struggles.

“180 Days: Hartsville” follows the rural town of Hartsville, South Carolina as the town adjusts to new educational standards and maintaining funding with a majority of their students living in poverty. Source: PBS LearningMedia.

From a hardscrabble childhood in the Depression-era South Maya Angelou rose to become the poet celebrated for her stirring reading of “On the Pulse of Morning” at President Bill Clinton’s 1993 inauguration. Her poetry, essays and memoirs won many accolades, including the 2013 Literarian Award for Outstanding Service to the American Literary Community from the National Book Foundation. In writing about her own life, she opened eyes to the experiences of African Americans and provided an important window into 20th-century American social history.

The essay contest invites high school students to write an essay interpreting an Angelou poem and describing how it contributes to the understanding of race in the U.S. and the African-American experience. The essays should include a thoughtful proposal for improving race relations based on what the student learned from reading the poem. The top three winners will receive prizes of $150, $100 and $50. Teachers and educators will serve as judges. Here are the contest rules and entry form. Please print the entry form, fill it out, get it signed and submit it as a PDF using this form.

KERA coverage on race and schools