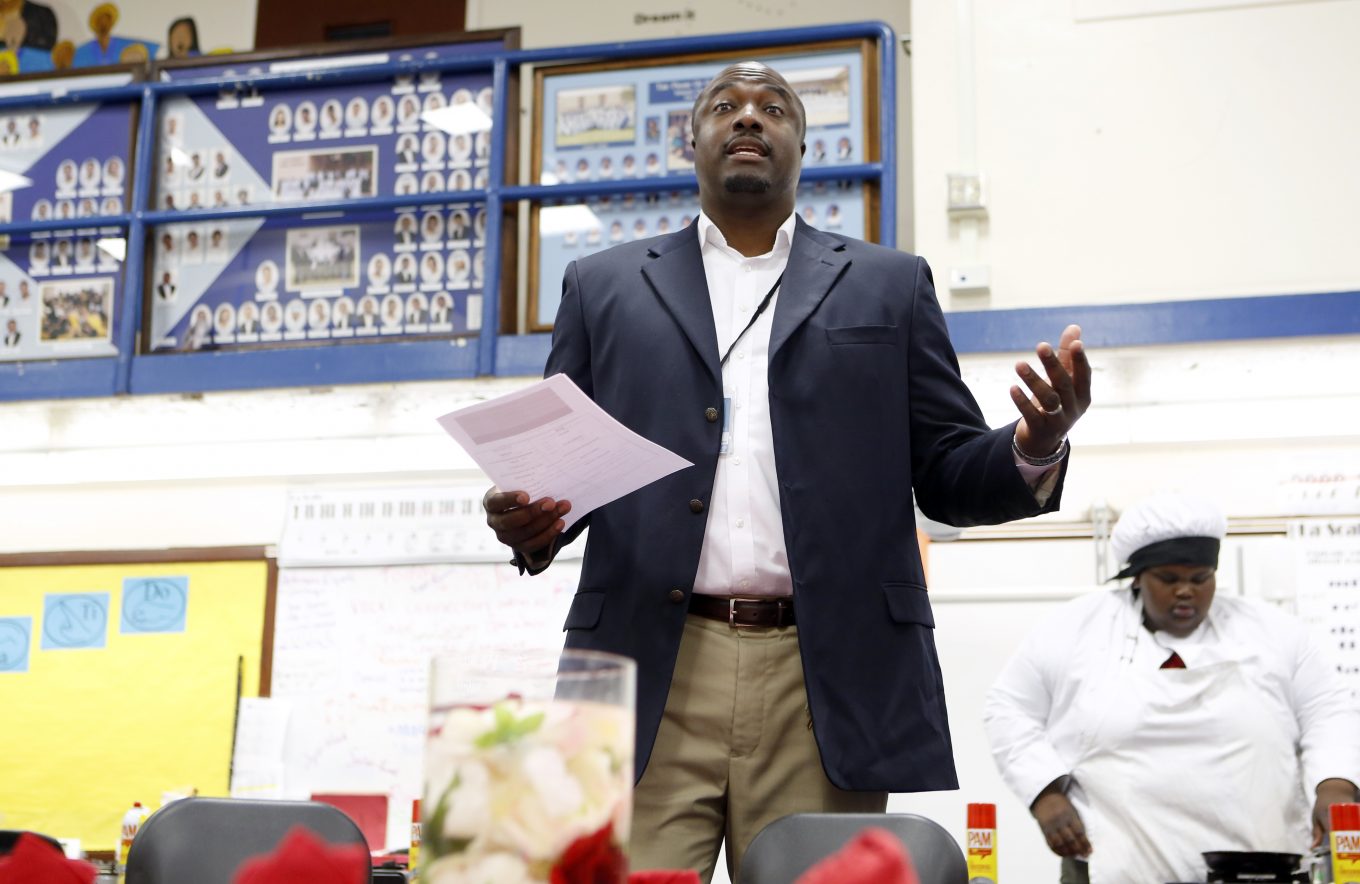 O.D. Wyatt – and the Fort Worth neighborhood around it – looks a lot different now than when the school opened in 1968. Back then, the student population was mostly white. Today, it’s more than 50 percent Hispanic, and there’s a growing refugee population. Academically, the school has struggled. A new principal is trying to change students’ perceptions of Wyatt.

Ninth grader Quinten Hutchinson has heard all the things people say about his school – O.D. Wyatt.

“Them kids up there is bad and loud,” they say.

He says that’s not true.

“I think it’s because the reputation that they’ve had for so long and ’cause the school is kind of old and the stuff that used to happen,” he says. “So when people hear [O.D. Wyatt], I think they just automatically just think of that.” 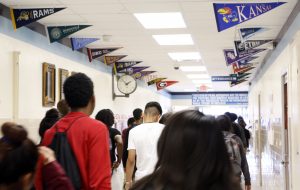 Students walk to class under a ceiling lined with college banners in a hallway near the entrance of O. D. Wyatt High School. Photo/Lara Solt

The older kids at O.D. Wyatt talk about how this year is different, Quinten says.

Part of the reason? The new principal, Mario Layne.

“When Mr. Layne came, he changed stuff,” Quinten says. “You can’t be on phones no more, ’cause last year you could be on phones in the classroom. And we got to wear IDs — we got to keep them on. So yeah, it’s changed, but it’s changed in a good way.”

Wyatt On The Move

When O.D. Wyatt opened in 1968, the school was predominately white. By 1994, 90 percent of students were African American. Today, it’s more than half Hispanic. And about one in 10 kids are refugees from countries like Bhutan, Myanmar, Somalia and Nepal.

Layne says the school used to attract students to its International Baccalaureate program. It’s no longer there. The school was competitive in academics and athletics. And it’s known for a vibrant choir program.

“We have a rich history at O.D. Wyatt High School, a lot of history that people don’t know about,” Layne says. “Back in the ’70s, we were pretty much a majority white school. We were a highly sought-after school. And a lot of people don’t know that. They only know Wyatt’s recent history.” 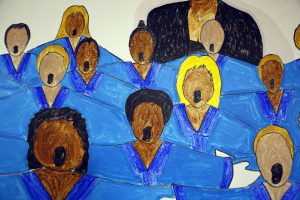 There were gang rivalries and a lot of fights. Lane is trying to change what people think about his school.

At 6 feet, 7 inches tall, Layne, a former Texas Tech basketball player, towers above students when he walks the hallways, which are now lined with college memorabilia.

He singles out students who wear their ID badges: “Hey, what’s up? Look at you, man! It’s my lucky day. You’re wearing an ID. Fixin’ to go buy a lottery ticket today.”

And the principal is busy on Facebook and Twitter, always promoting the school with hashtags: #WeAreWyatt and #WyattOnTheMove.

O.D. Wyatt has seen a surge in poverty. In the early ’90s, a quarter of students were economically disadvantaged. Today, it’s 70 percent.

“We have a perception that our students aren’t smart or our teachers don’t work hard or whatever the case may be,” he says. “The truth is that we have really smart and talented kids. The truth is we have some hardworking teachers. The truth is Wyatt has the potential to be a really, really good school, but you have to have people that believe in that.”

At a recent breakfast meeting on campus, there were plenty of believers — folks from community organizations and churches. The soundtrack to the meeting was O.D. Wyatt’s orchestra. Students in the school’s culinary program cooked pancakes, omelets and bacon for the adults.

Layne and his staff use these meetings to promote the school and what they’ve accomplished — like the seniors who got full-ride scholarships to Texas A&M University. Or how for the first time ninth graders next year will be able to earn college and high school credit for certain classes.

“We’ve really worked as a school working on those kids that have really been struggling, really been trying to get over the hump,” he says. “But now we’re also trying to push kids that are top, kids that in the middle that can potentially be at the top. So that’s the type of program that can really change the trajectory of a kid’s life.”

Slideshow: Wyatt Through The Years

Economically Disadvantaged Students Over 20 Years
Create line charts
“The truth is Wyatt has the potential to be a really, really good school, but you have to have people that believe in that.”
Mario Layne, O.D. Wyatt principal

An Introduction To College

In March, 200 kids showed up to school at 5 a.m. — not for class but to hop on charter buses for a trip south to the University of Houston and Texas Southern.

LaJeania Allums, a case manager at O.D. Wyatt, said the kids were fascinated by the experience. 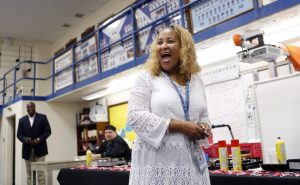 If they can get more kids to think that way, school leaders say, they can keep changing minds – not just the students, but how people across Fort Worth see O.D. Wyatt. 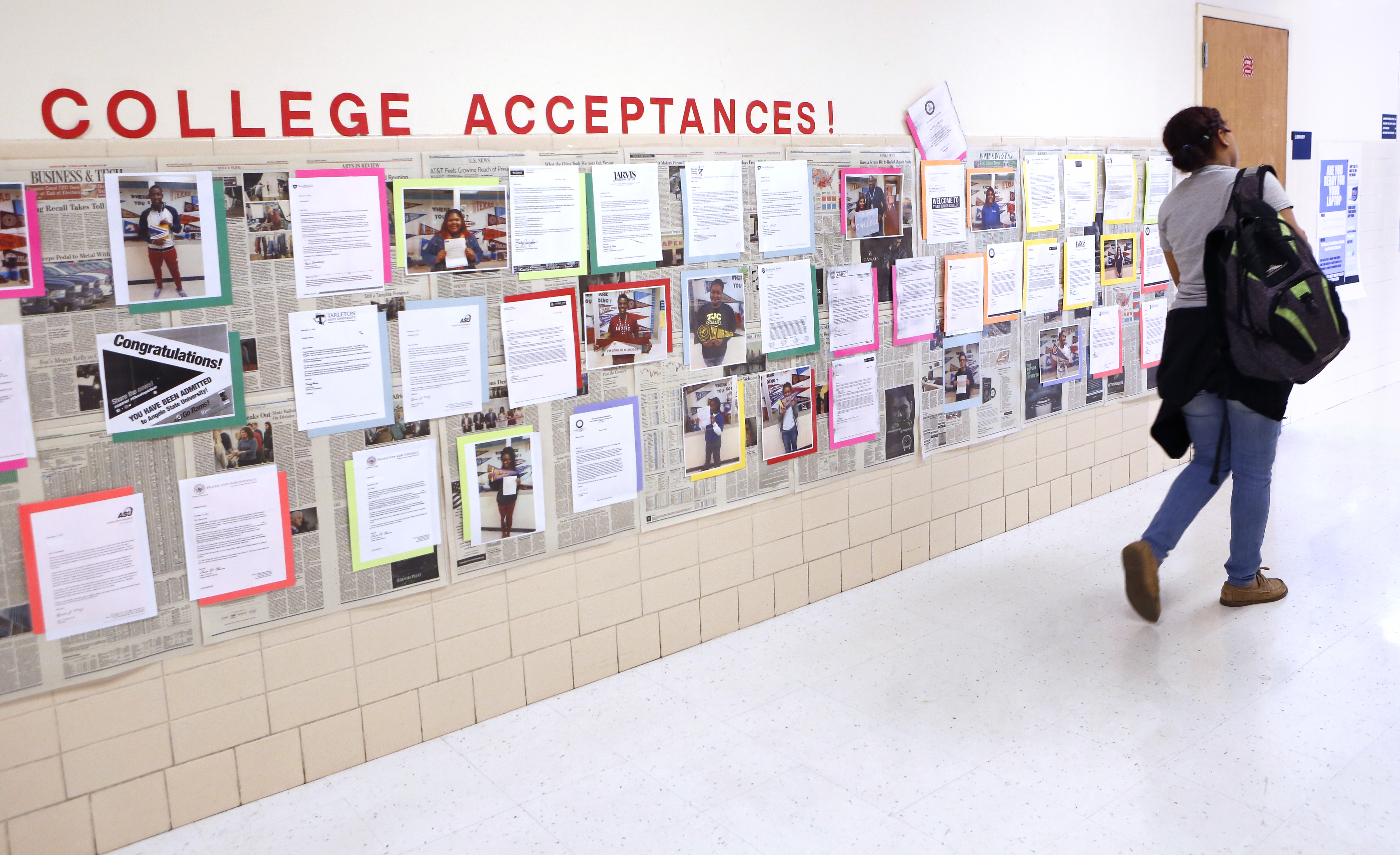 College acceptance letters and photos of students who have been accepted line a wall near the entrance at O.D. Wyatt High School. Photo/Lara Solt