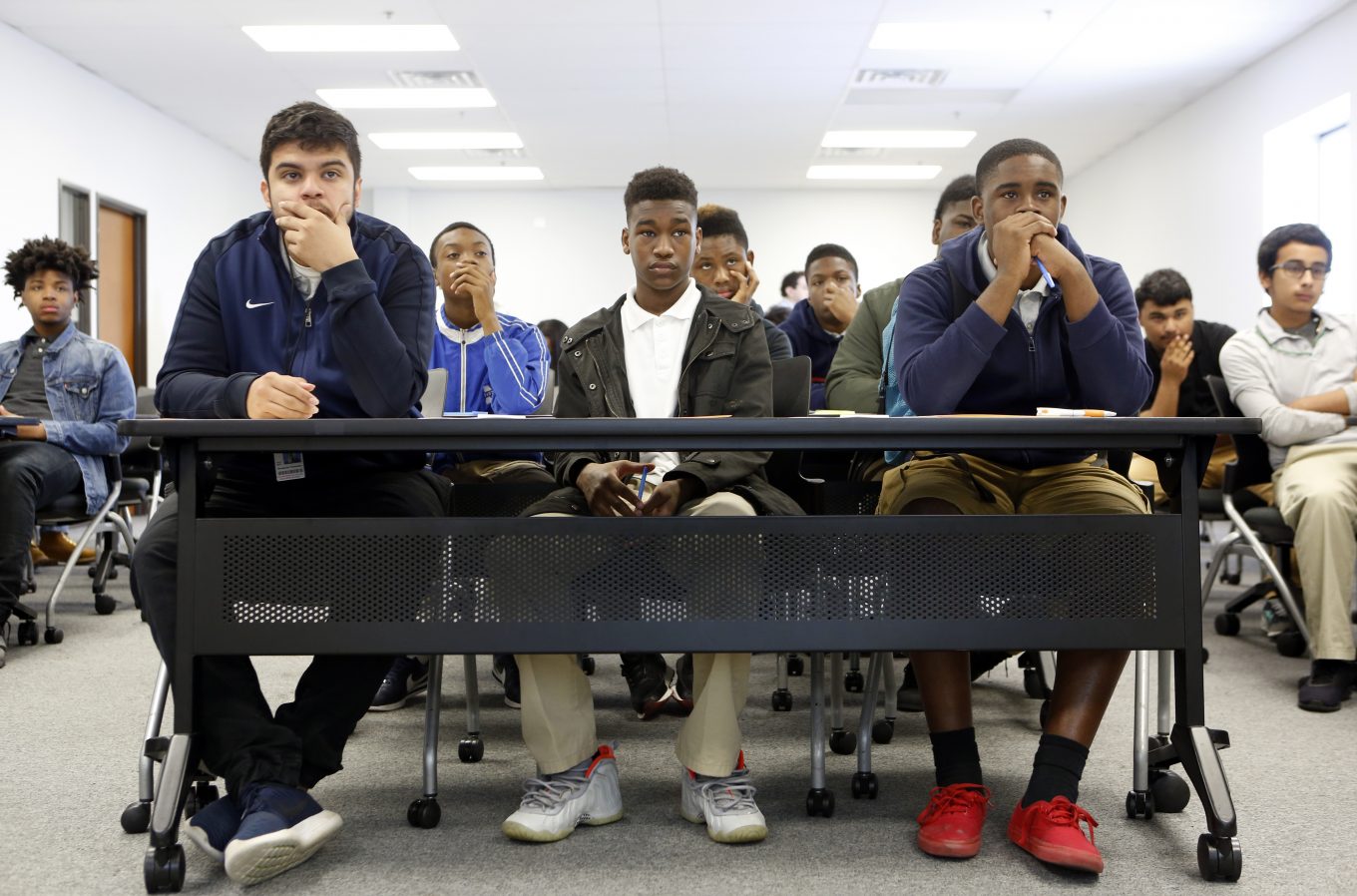 Students listen to a session about career choices at Kimball High School's Academy of Hospitality and Tourism. Photo/Lara Solt
The KERA Radio story

Poverty is surging at Kimball High School in Dallas. Fifteen years ago, 57 percent of the families were economically disadvantaged. Today, it’s 83 percent. The Oak Cliff school is battling those numbers and turning around a dismal academic record — in part with its hospitality and tourism program.

Delores White not only teaches a hospitality class for juniors at Kimball High but also runs the school’s four-year Academy of Hospitality and Tourism.

“We’ve been here for 10 years,” she said. “But we didn’t actually start thriving until, let’s say, four years ago.”

White’s not shy — that’s when she took over. Under her direction, the program has earned “distinguished” status from the National Academy Foundation. She says this program helped restore pride in Kimball. That’s after the state ranked the school academically unacceptable for five out of six years.

“We were academically underperforming,” she said. “Because of this academy, we raised the bar. “ 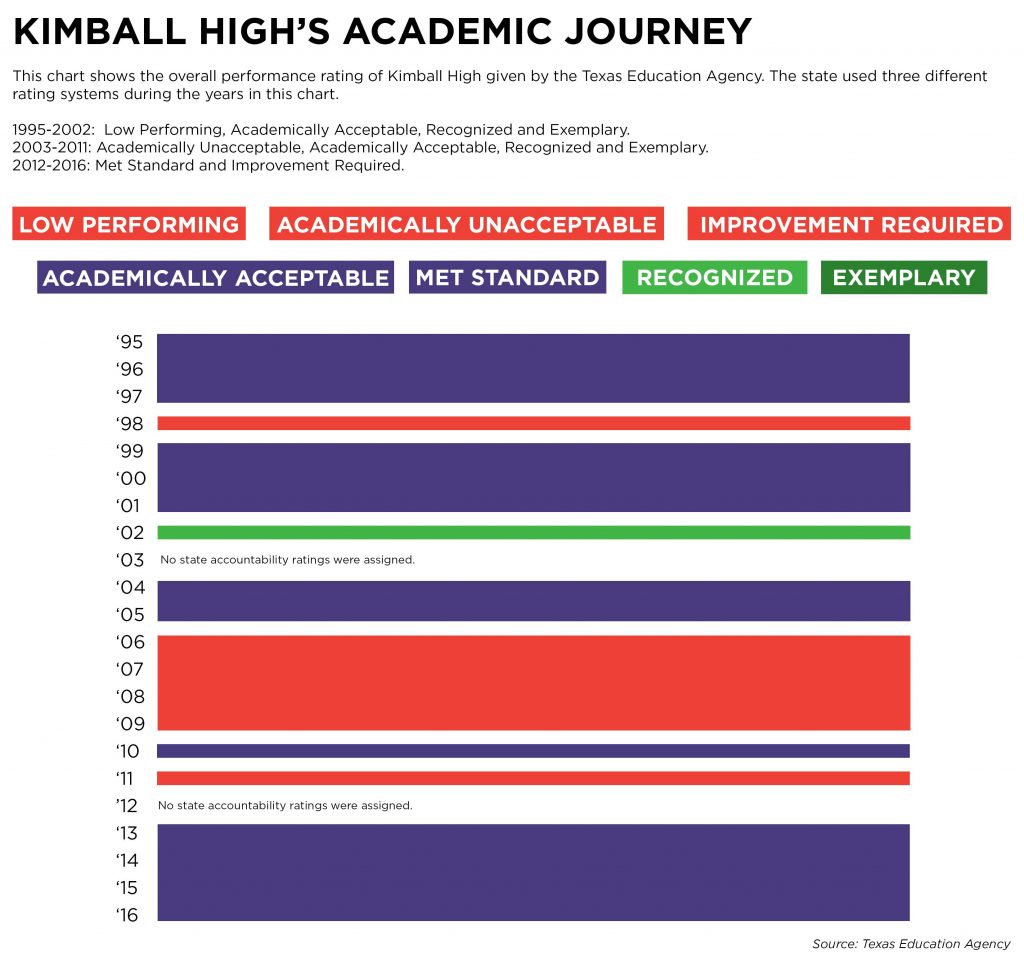 The National Academy Foundation partners with schools in high-need communities in 36 states and demands tough academic and professional standards.

Kimball has been challenged by a growing number of charter schools. White’s confident about her program.

“Charters – I might consider them as being the competition,” she said. “Not great competition though.”

“This academy has given us just a big advantage over everybody else,” Shai says. “I feel like there’s no job that I can’t go out and get myself. I’ve been taught how to speak in an interview. My resume looks good.  They’ve taught me so much about creating my own business, how to work well with others.” 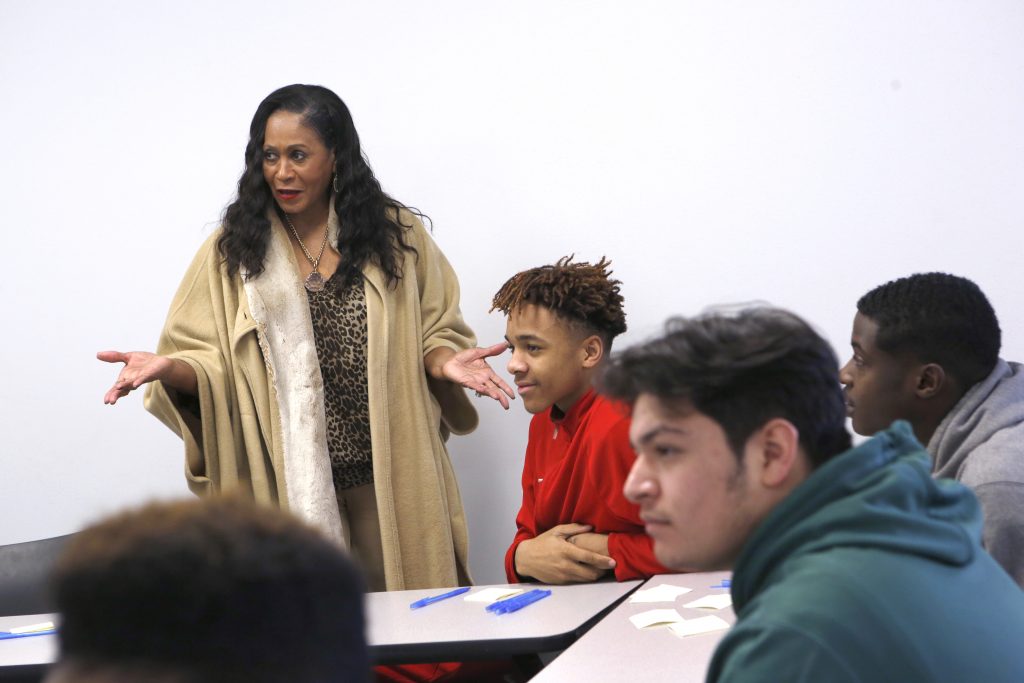 “I would definitely love to be first in my family to go to college.”
Francisco Gamez, Kimball junior

White is all about preparing students for college and business. For many kids, it’s a way up and out.

While they won’t all end up working for a hotel or travel business, the lessons will stick, especially from internships that the program requires.

Tia Crowe, a Kimball senior, was a paid intern at the Hotel Association of North Texas, and says it was a big deal. 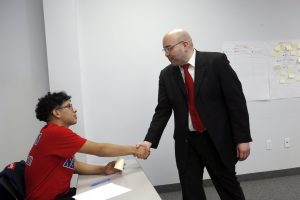 “We were treated not only as students but as an adult, as a co-worker at that job,” Tia says. “It was a good experience.”

Francisco Gamez, a 17-year-old junior, is looking forward to applying for an internship.

“To get real world experience on how a job should be and how it could be is definitely a great opportunity that they offer,” he says.

First, he needs a suit. During a field trip to Workforce Solutions of Greater Dallas, he was measured for one. The job training center has racks and racks of business suits. That’s one reason Delores White brought 40 guys from the academy.

“Most of our young men don’t have proper attire for interviewing,” she said. “We insist that they dress professional regardless of the job they’re going for.”

These clothes are free, which suits Francisco.

“A lot of us maybe don’t have exactly the finances for a suit,” he said.

Neither do most kids from Kimball. More than 80 percent of the student body qualifies as economically disadvantaged.

This is the first time Francisco’s ever been fitted for suit. There’s another first he’s dreaming of.

“I would definitely love to be first in my family to go to college,” he said.

Francisco’s parents, who are originally from Mexico, got as far as high school.

“I kind of considered that lots and lots,” he said. “It’s always run through my mind, that they did this for us — well, for me and my other younger siblings. So might as well make them proud. It’s like an investment. … I want them to make sure that was a good investment.”

‘There has to be something new done’

Four hundred students are now enrolled in the hospitality program, which is more than a quarter of Kimball’s kids.

The academy is a good calling card for the school. Principal Llewellyn Smith says it’s time for more options.

“It’s competitive out there and we have so many charter schools now in this area in particular, that are drawing a lot of our kids to those programs,” Smith said. “There has to be something new done.”

These days, Smith says, additional programs should add interest for students and parents.

“This is what’s happening with this collegiate academy, academy of hotel and tourism, whether it be an academy of law or academy of engineering at a school,” Smith said.

That collegiate academy starts next year and there’s already buzz, especially among teachers.

Duncanville's Buoy In A Sea Of Change: A Victorious Basketball Team