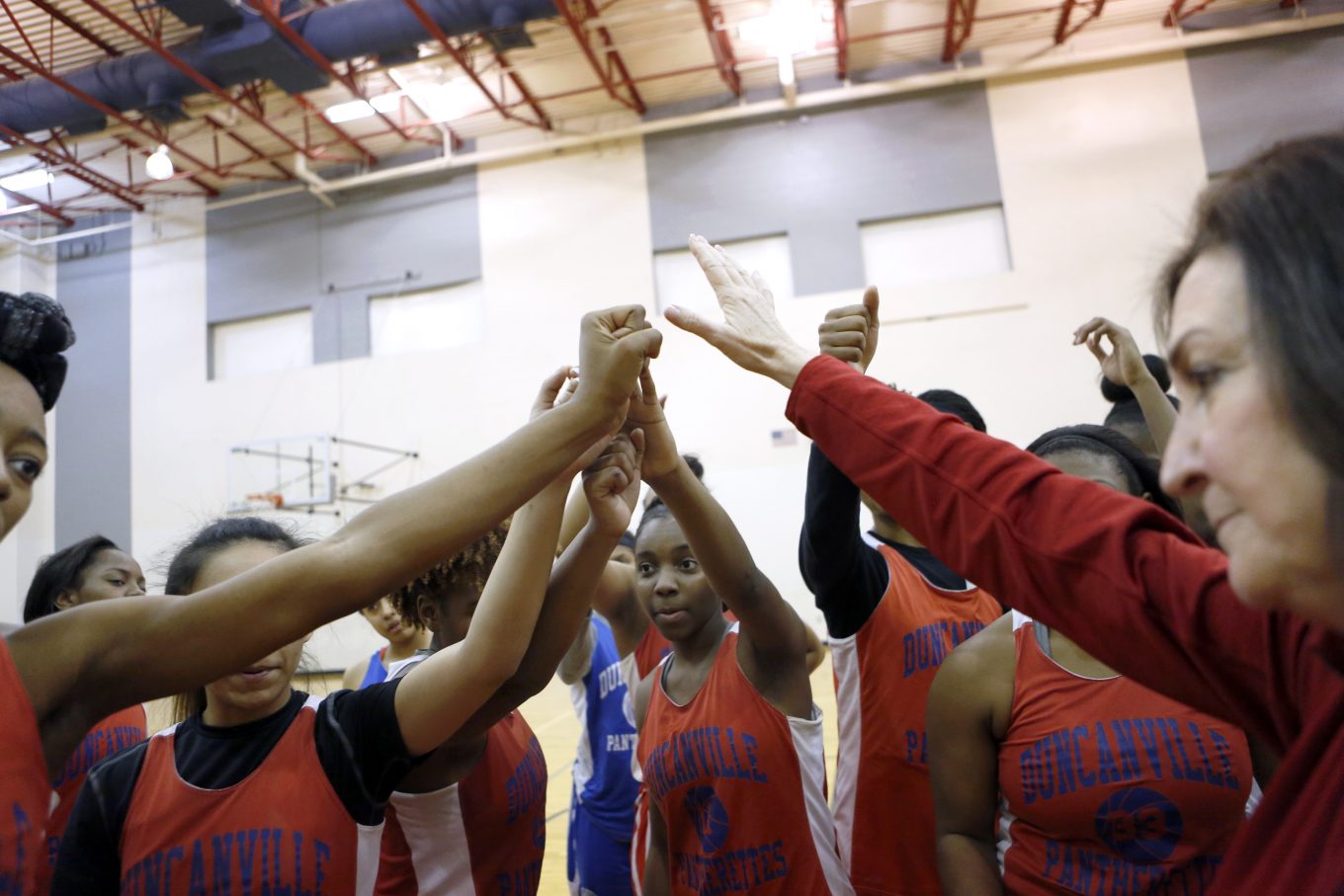 Duncanville’s Buoy In A Sea Of Change: A Victorious Basketball Team

Editor’s note: The Duncanville Pantherettes won their 10th state basketball title in the school’s history on March 4, 2017 in San Antonio. Our story has been updated to reflect the team’s latest win.

Through demographic and economic changes over the years, Duncanville High School, in a suburb south of Dallas, has maintained one constant — a winning girls basketball team.

During a recent game, Cathy Self-Morgan was leading her Pantherettes to another lopsided win.

At the time, their record was 37-2. In Duncanville, that’s almost a low-performing year. Last season, the Pantherettes were undefeated.

Self-Morgan arrived here 17 years ago already a champion with three state titles under her belt at Westlake High, near Austin. She wasn’t expecting to leave Westlake. 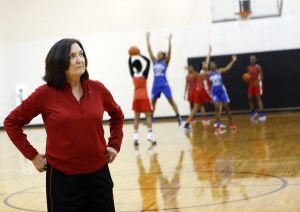 “I thought my ashes would be buried there,” she said. “I had been there 22 years.”

Self-Morgan’s Austin suburb was mostly white, and so is she.

When the coach moved to Duncanville, the team was racially mixed. She points up to her office wall – pictures of every team she’s coached. They start more white than black, then they are all black. Now, with a booming Hispanic student population, there’s a Latina starter.

The fundamental change, however, isn’t race.

That’s a big job at a school where two-thirds of the kids are labeled economically disadvantaged.

“They want more programs, they want more options, and we hadn’t been providing that,” Smith said. “If you can go five to 10 minutes away and get an all-day pre-K, that’s pretty appealing to parents. If you can go 10 to 15 minutes away and have your kid in a collegiate academy, where they can graduate with an associate’s degree, that’s pretty impressive.”

Self-Morgan does what she can so the team stays impressive. Every one of her players over the past six years has gone to college on a basketball scholarship.

She’s got the secret, which isn’t so secret.

“You know, a coach has got to have a culture that the kids buy into,” she said. “With these kids, if they love you and you love them, they’ll do anything for you. And I would do anything for them. And they know it.” 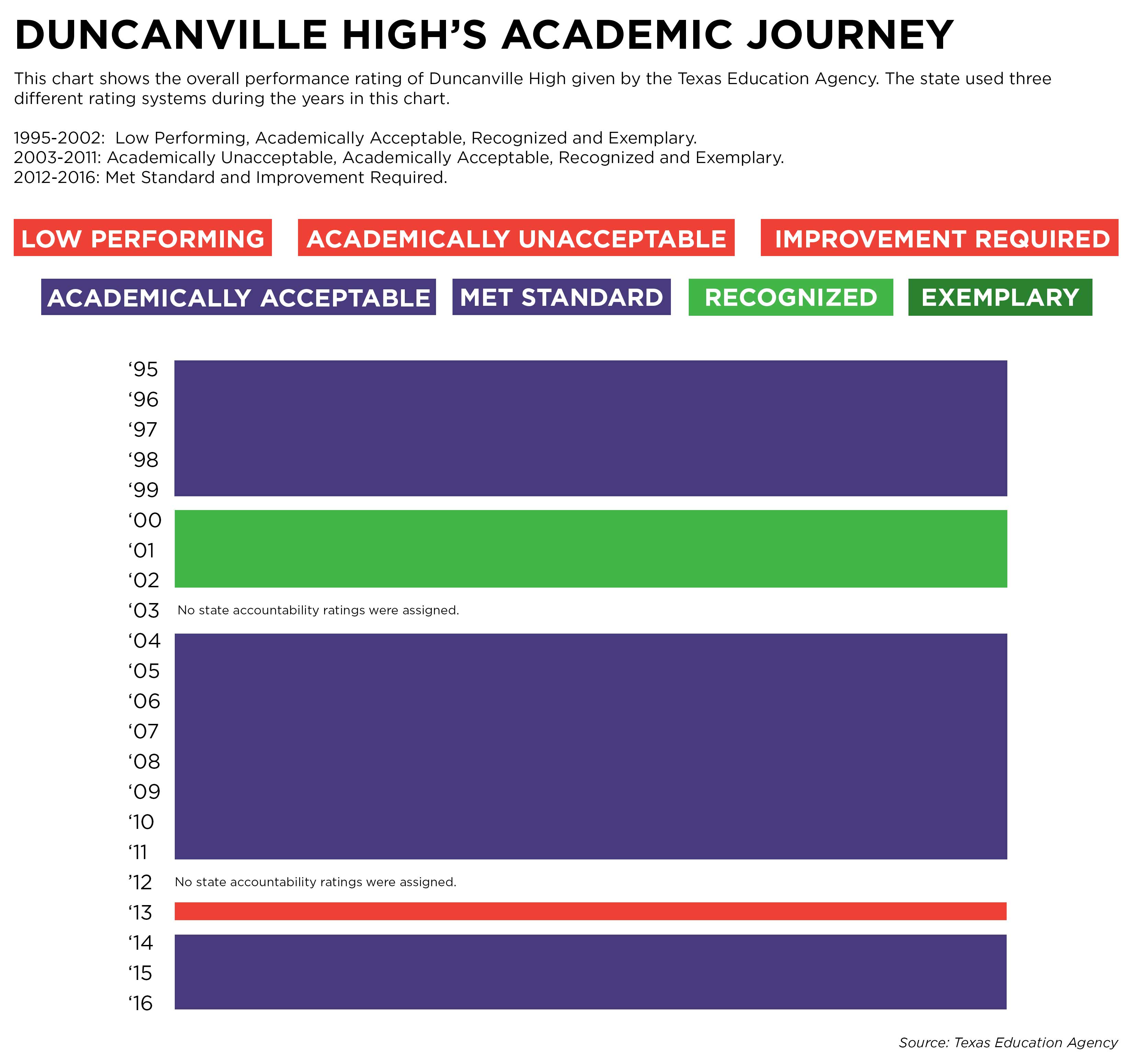 So when she demands hard work on and off the court, and she does, senior Pantherette Nina Alvarez delivers.

Junior Aniya Thomas jumps in: “If you don’t, you’ll get subbed out.”

“Every minute, every second you’re on the court, go get it,” Nina says. “There’s no stop, no rest. If you want it, go get it. She makes it fun.”

“If you’re going to be a dissenter, you don’t belong as part of the Pantherette organization or a follower.”
Bobby Goldman, Duncanville graduate

‘They were raised to win’

The most fun comes from winning, which is by now a Duncanville tradition. So much so that the town’s motto — City of Champions — is based on the Pantherettes’ 10 state titles, going back to 1976.

Volleyball coach Marla Hust was the basketball team manager in 1990, her senior year. That’s when legendary coach Sandra Meadows led the Pantherettes to one of her state championships.

“You know, we really are the City of Champions, and these kids don’t truly understand,” Hust said. “You know those two young ladies, you know Nina, I’ve known her since seventh grade. They were raised to win. They were raised not just to win in the sense of the scoreboard but the standard of excellence Duncanville believes in.” 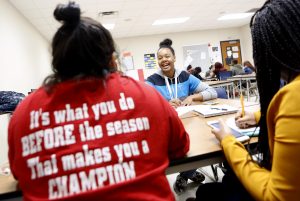 Bobby Goldman believes. At 81, the Panther graduate and lifetime resident has rarely skipped a basketball game in 66 years.

“I’ve had some physical problems, and I had to miss some earlier in the year,” he said. “Had some open heart surgery, bypass.”

The retired IRS agent, who is white, worried fans like him might disappear as the school’s minority population surged. Still, Pantherette pride prevailed.

“It’s just cooperation, working together and working for that common cause of having the great girls’ basketball team,” Goldman said. “We just don’t accept any dissent in there. If you’re going to be a dissenter, you don’t belong as part of the Pantherette organization or a follower.”

Goldman is a pure fan, already looking ahead to see what kind of players will make up next year’s team and the years after.

First, he wanted to see this team take another championship. And the Pantherettes didn’t fail — they defended their Class 6A title in a victory over Houston Cypress Ranch on Saturday, March 4 in San Antonio.