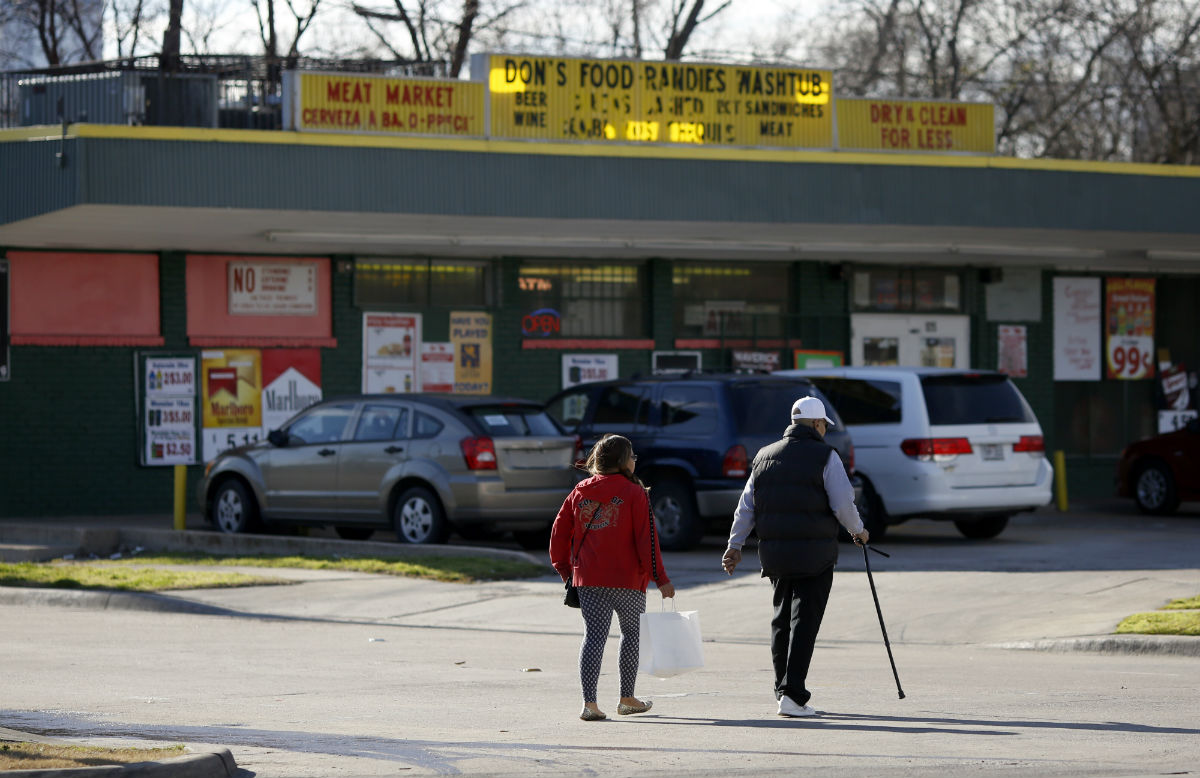 Around Here, Fresh Food Is Hard To Find

For some, the most challenging chore of the week is buying groceries. Jubilee Park, sandwiched between Interstate 30 and Fair Park in Dallas, isn’t technically a food desert. That’s defined as a community that doesn’t have a grocery store within a one-mile radius. There is a supermarket, but you have to cross under a highway to get there. Many Jubilee Park residents drive for miles to get their groceries. And folks without a car pay the price at the corner store. 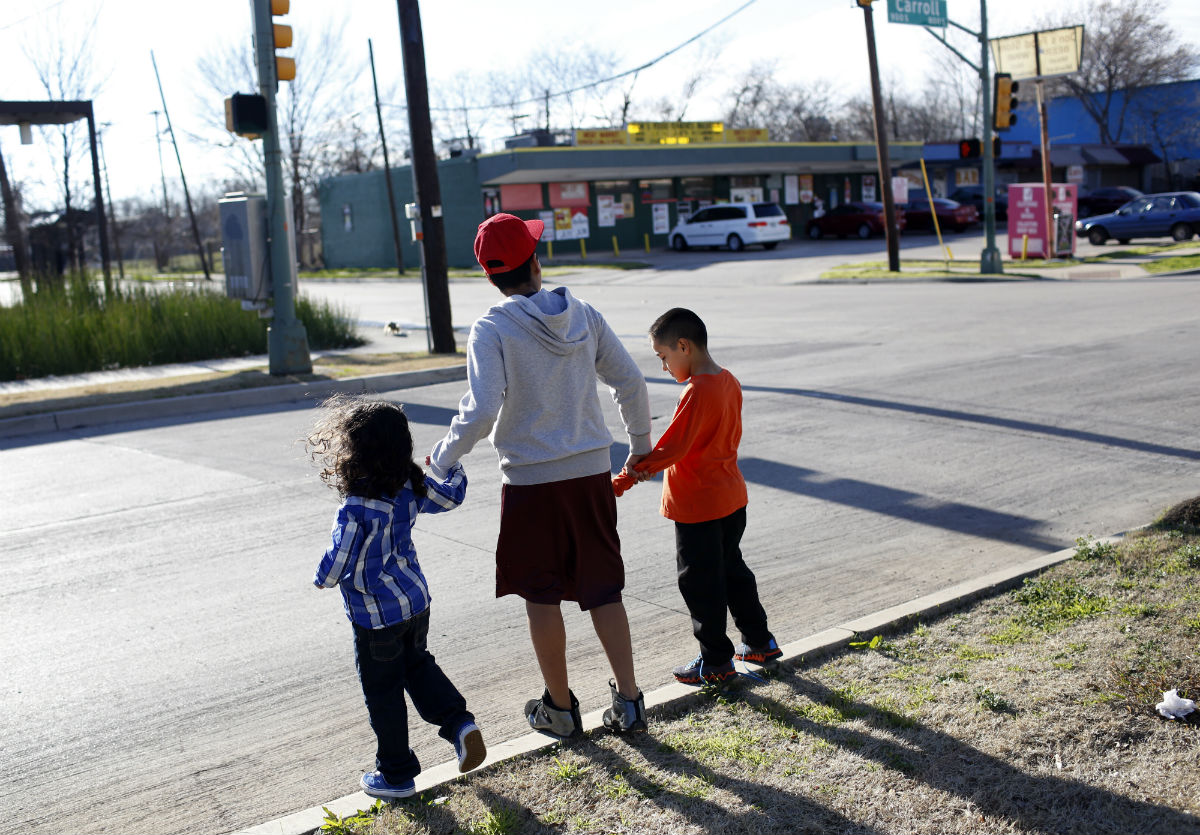 In Jubilee Park, many residents cross busy streets to get to their main source of food: the corner store. The nearest groceries are separated by Interstate 30 and Fair Park. Photo/Lara Solt

If you want to stock up on food here, you have three options. Get in the car and drive, learn the bus routes or hoof it under Interstate 30 to the closest store. 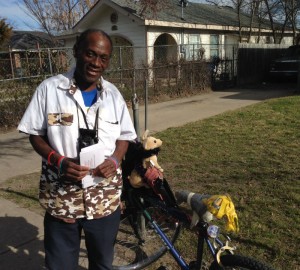 Sherman Turner travels by bike, with his stuffed chihuahua at his side. Photo/Courtney Collins

“We have to go up here on Columbia to Malone’s or go to South Dallas to Martin Luther King, to Minyard’s. That’s for cars,” he said. “I have to ride this bike up there!”

Turner bikes everywhere. He doesn’t have a car, so he just hangs his grocery bags on the handlebars,  next to the stuffed chihuahua acting as a hood ornament.

“I see a lot of people walking back and forth bringing their bags back,” he said. “But this neighborhood, we deserve a little old store, you know?”

Around the corner on Congo Street, Yolanda Weeks thinks so, too.

“You gotta go travel at least 10 miles to go to a decent grocery store,” she said. “That’s ridiculous.”

MAKING A MEAL FROM THE CORNER STORE

Weeks shops at a Kroger 15 minutes away. She counts herself lucky, because she can drive.

Experts agree. When there is limited access to fresh, healthy food, people don’t eat it. Instead, they make do with what’s available. Stacy Cherones is a dean at Paul Quinn College and is also president of the nonprofit Get Healthy Dallas.

Here’s a look at some of the corner stores near Jubilee Park in Dallas, compared to the nearest grocery stores. 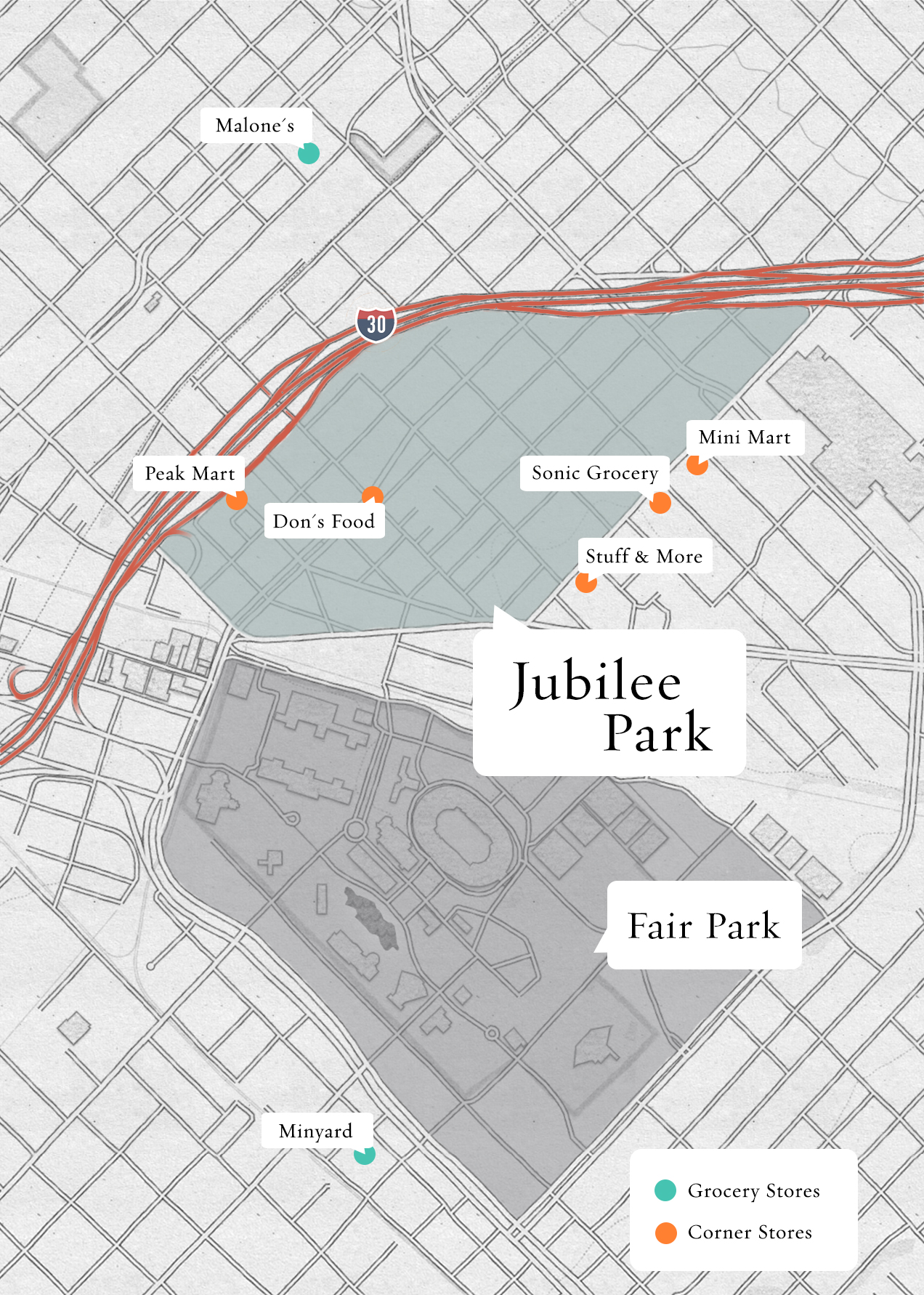 In Jubilee Park, there are half a dozen corner stores within an easy walk. The closest grocery store is three quarters of a mile away, across the highway. It’s called Malone’s Cost Plus, and it caters to Latino customers. 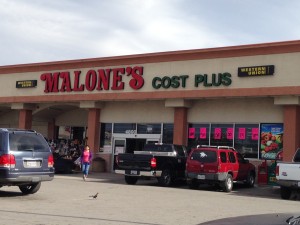 Malone’s is near Jubilee Park. But Interstate 30 separates the grocery store from the neighborhood. Photo/Courtney Collins

Another grocery store, Minyard’s, is about a mile away. You don’t have to cross a highway to get there, but you do have to get around Fair Park, the sprawling home of the State Fair of Texas.

“For those who are looking for fresh, healthy food, it’s tough,” Cherones said. “They have to get on public transportation, or borrow a car or figure out a way to get to a grocery store. And that’s often really hard when you have children.”

Or if you’re a senior citizen. Or work multiple jobs to make ends meet.

Owen Lynch is a professor at Southern Methodist University and works with Cherones at Get Healthy Dallas.

“If you have two jobs or three jobs and then you have young children and their activities and school, when are you supposed to find the hour-and-a-half of your day or week to go up and grab groceries and bring them back?” Lynch said. “And then also prepare them and cook them and hope you can cook them efficiently enough where they don’t perish.”

While access to grocery stores is the root of the problem in Jubilee Park, Lynch and Cherones are also fighting against bad habits.

“If it’s been decades since you’ve had a grocery store around, you probably aren’t in the habit of cooking up broccoli for dinner,” Cherones said.

Kenneth Camp doesn’t have a car, so he rides the bus from Jubilee Park to the store to shop for groceries. His trip can take up to three hours. In this video, hop on the bus with Camp.

That’s why plunking a large store into a neighborhood won’t magically solve the problem. Get Healthy Dallas works on a smaller scale — think culinary programs in schools, small restaurants and micro-farming. 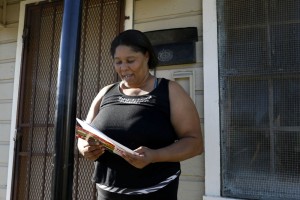 Yolanda Weeks, a Jubilee Park resident, says it can be tough getting fresh food in the neighborhood. Photo/Lara Solt

The Jubilee Park Community Center is already working to do that. Every Wednesday and Friday, it serves a hot, healthy meal to seniors. There’s a chef on staff and half a dozen volunteers who spend several hours getting the food ready.

Maria Montes is one of them.

“I mean eating healthy costs a lot,” she said. “I know because I go to the grocery and vegetables and food costs a lot of money. You know so there’s where we come. Jubilee comes and at least provides healthy food for them two days a week.”

On this particular day, volunteers are serving up homemade beef stew, cornbread and applesauce. Montes says it’s the best a lot of the seniors eat all week.

“If I’m a senior and I want to eat good, a lot of the seniors … they don’t have transportation,” Montes said. 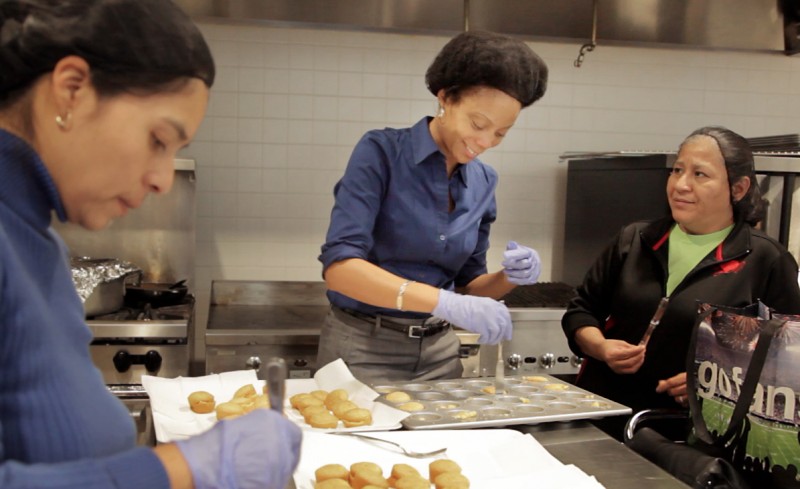 ‘I CAN COMFORT THEM’

And a lot of them aren’t up for a long bus ride or a trek under I-30, which is why meals at the community center are so vital. The giving spirit of the Jubilee Park volunteers doesn’t hurt, either. 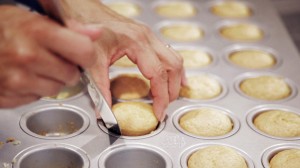 “I can comfort them and I can give them love and care and I tell them like I told them today, ‘One day, I’m going to be in your shoes,’” Montes said. “And maybe Jehovah will say to me, ‘You know what, I’m going to give you some of the little things that you give to others.’”

Helping neighbors eat well; making access to fresh food easier; and getting residents comfortable buying it, cooking it and snacking on it – they are all key ingredients in the recipe for community health in Jubilee Park.