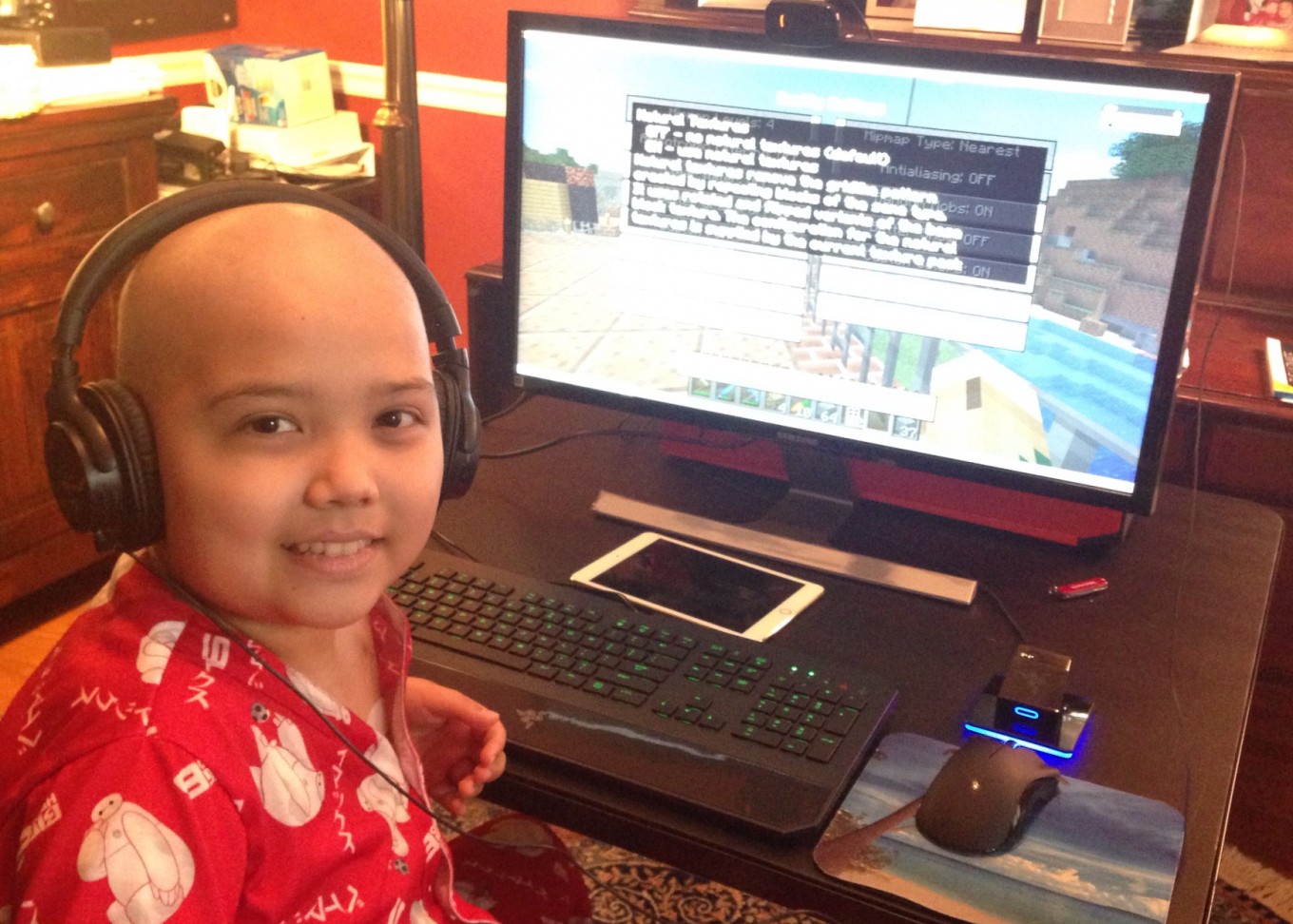 Jude Cobler worked on building a computer with his father. Photo/Courtesy Cobler family

‘It Sucks’: Jude’s Leukemia Has Returned

There’s an enormous photo of Jude on the sixth floor at Children’s Medical Center in Dallas. It was taken five years ago, right after a successful bone marrow transplant. He’s smiling, holding an iPad and wearing a dark hat that reaches to where his eyebrows should be. Today, Jude is on the sixth floor again, but he’s not smiling.

In early April, we learned that Jude Cobler’s leukemia relapsed.

“It sucks, because it does,” Jude says. “It definitely does, but I know I’m going to get through this.”

Jude, who’s 10, has just finished his second of three rounds of chemotherapy. He’s been filling his time with video games, TV, and putting together a computer with his dad, which he said was fun and challenging.

The challenge for doctors, and Jude’s parents Boots and Keith Cobler, is finding the right bone marrow donor.

“In Jude’s case, being … half Caucasian and half Filipino, it’s very difficult to find a match,” Keith Cobler said. “We’re still searching the databases and trying to get people to join the registry with Be The Match to get on that. It’s really a difficult task for minorities and mixed races.” 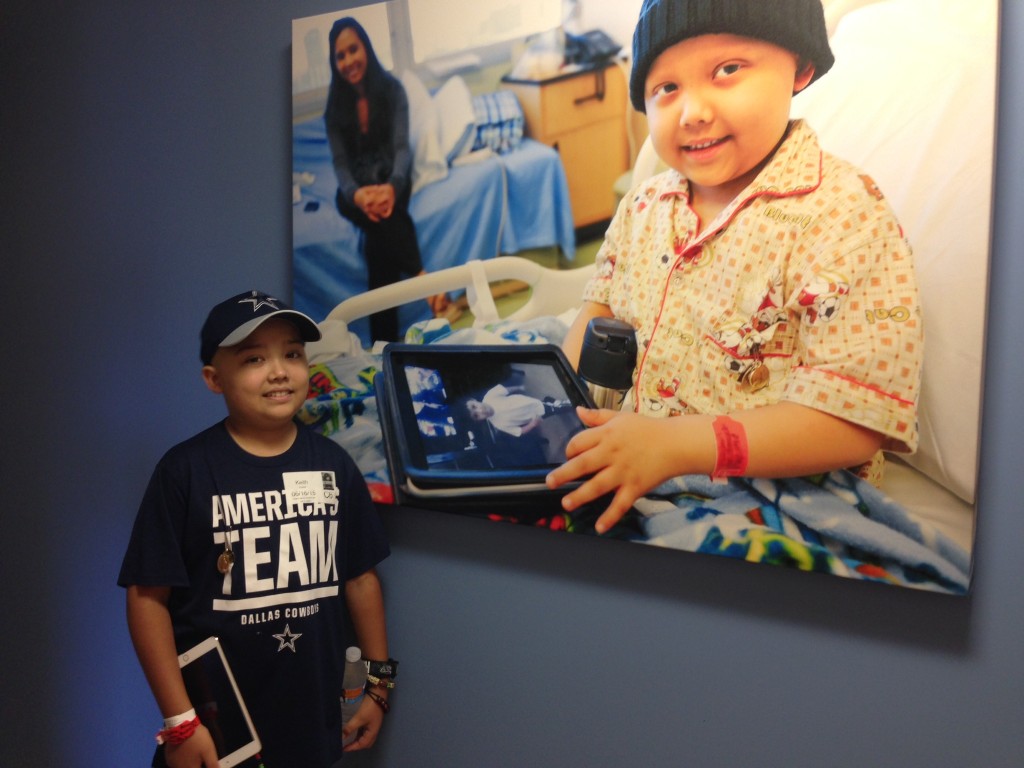 Jude Cobler stands next to a picture of him hanging on a wall at Children’s Medical Center in Dallas. Jude’s Acute Lymphoblastic Leukemia has relapsed. Photo/Courtesy Cobler family

Sometimes, Cobler says, you might find someone who’s registered to donate, but no longer is able to take a week or so off for the procedure. 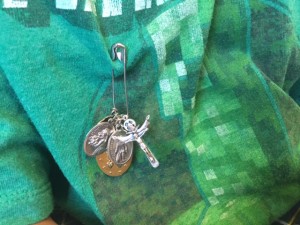 In the meantime, the whole family has to be careful. The chemo drugs have left Jude with almost no immunity. As he gets ready to go outside, he straps on a white face mask.

Something shiny glints from his Minecraft T-shirt. His mom, Boots, touches what look like charms.

It’s the same pin with silver and gold medals that he wore five years ago when he was first diagnosed with leukemia. There’s St. Peregrine, the Holy Spirit and the Miraculous Medal of Mary, pinned right above his heart.

Since Jude had gone five years cancer-free after chemotherapy, radiation and a bone marrow transplant, there was very little chance of a relapse. So, earlier this year, when Jude went to Children’s Medical Center after not feeling well, the news that his cancer was back was a shock.

“Most children with leukemia right now are cured of their disease long term,” she said. “I think one of the things we knew about Jude’s leukemia is that it was a little more resistant to chemotherapy. Our goal is to have children in remission that first month. His was a little slower. Why it is that the leukemia cells were quiet for five years before they came back? That’s a question none of us can answer.” 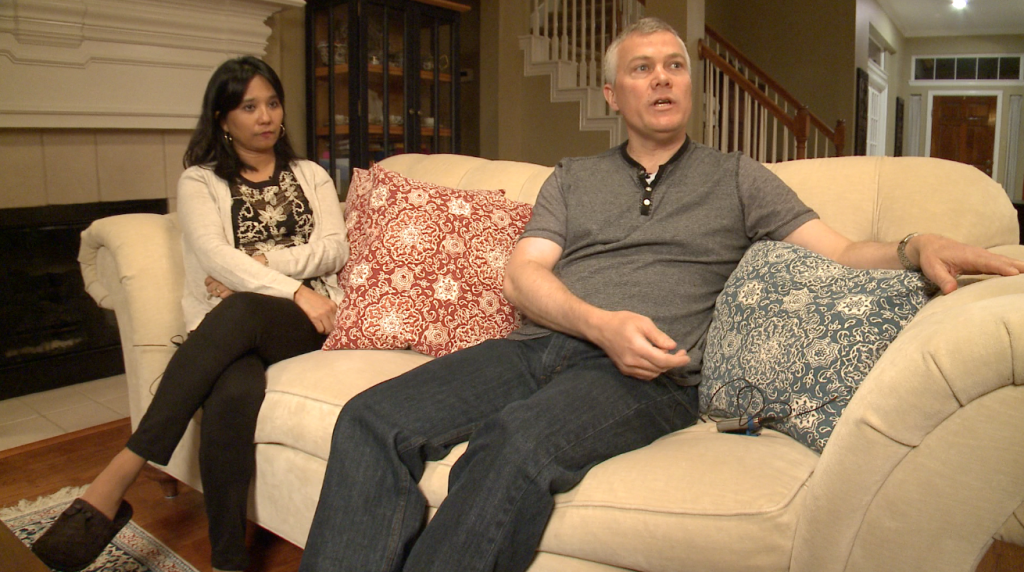 Jude’s parents, Boots and Keith, are camping out at the hospital that’s once again become a second home. They’re trying to stay awake — and optimistic.

“We feel like we’re at the base of Mount Everest, just getting ready to start the climb,” Keith Cobler said. “It’ll be a long and difficult climb.”

The first plateau to reach is remission. That’s where the signs of leukemia are gone, even though cancer cells may still be in the body. Then Jude could need another bone marrow transplant. Scaling that peak is extra tricky.

Keith Cobler is white. Boots is from the Philippines. Being a mixed-race couple poses a challenge.

“The challenge, of course, is finding a match for Jude,” Keith Cobler said. “Finding that match is very difficult.”

There are around 16 million volunteer donors on the national Be The Match Registry. Of those, only 3 percent identify as mixed race. 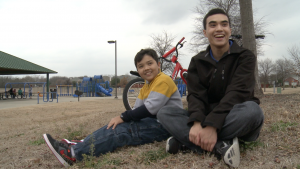 Dr. Klesse says it may be possible to use bone marrow from Joshua again. But she says that there’s a benefit in looking for somebody else that also is a match. You want the donor cells to be similar enough to blend in, but not so similar they forget to fight off the leukemia.

The Coblers, and all of Jude’s friends, started the search soon after the relapse.

In a video,Jude’s classmates at All Saints Catholic School in Dallas held up handwritten signs saying “I AM JUDE” to promote a bone marrow drive in May with the national Be The Match Registry.

As Jude works through chemo, he’s finding new ways to distract himself. Among them, he’s learning to play the ukulele.

Team Jude: Register with Be The Match to be a potential marrow donor.