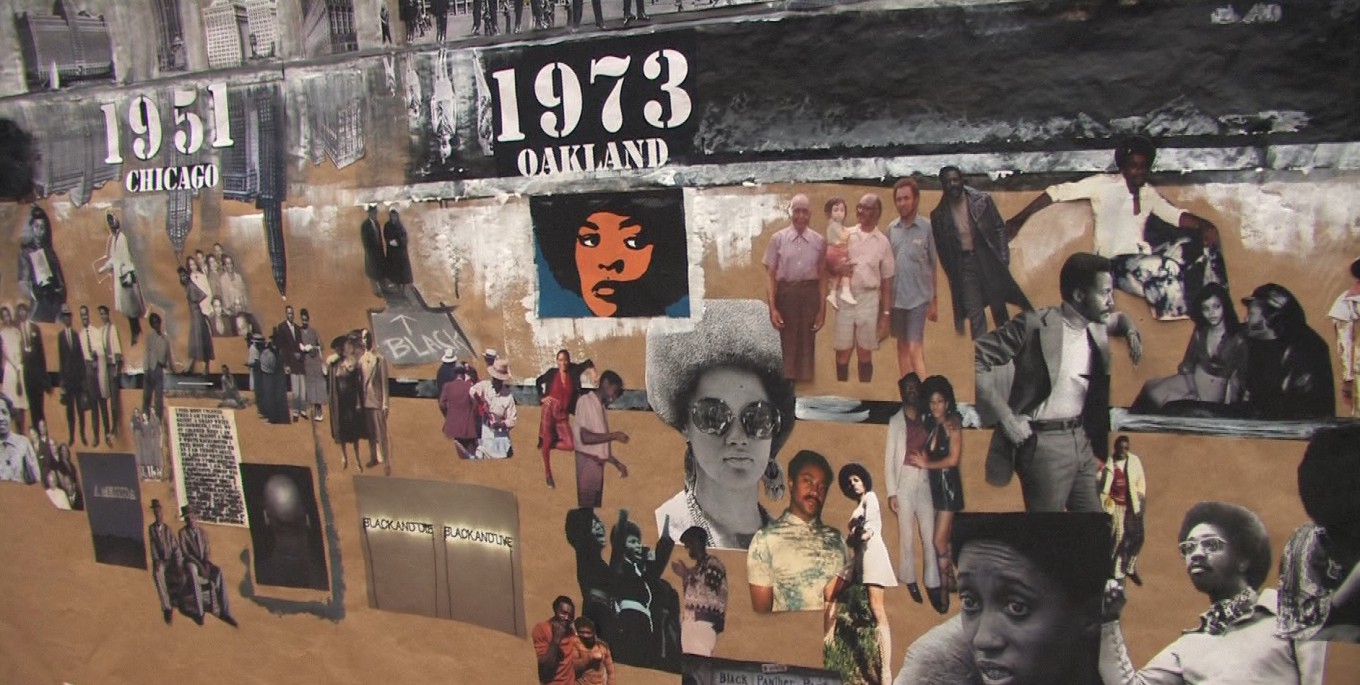 A collage of photos and clips adorns the wall of the rehearsal space.

The classic number “Stagger Lee” inspired the Dallas Theater Center’s new, original musical, Stagger Lee. Belonging to the genre known as a “murder ballad,” the song details what supposedly happened on December 28, 1895 between a black Texas gambler named Lee Shelton, known as Stagger Lee, and William “Billy” Lyons. The two men were rolling dice late at night in St. Louis. According to the best-known versions, Billy won Stagger Lee’s money and his beloved Stetson hat, and for that, Stagger Lee fatally shot him.

Beyond that, almost all the details and context have been embellished, flipped, denied or completely altered. In some, Stagger Lee gets convicted and hanged. In others, he escapes, he’s killed by Billy’s widow, he even goes to hell and takes over from Satan.

But it was that shooting — and the songs it inspired — that made Stagger Lee’s name in American folklore, regardless of how the name is spelled (Stack-O-Lee, Stackerlee, Stagolee). The song has been covered dozens of times, by the artists below as well as by Bob Dylan, Nick Cave, Fats Domino, Lorenzo Antonio and Amy Winehouse.

Mississippi John Hurt narrates a more elaborate version than usual with “Stagolee” a “desperator” and coal mine robber. Employing a technique used in several versions, Hurt addresses listeners as the jury (“Gentleman of the jury, what you think o’ that? / Says, “Stagolee killed Billy de Lyon about a five-dollar Stetson hat”). A blues master, Hurt was born in 1892 in Mississippi, just three years before the shooting that led to the song he sings. Hurt recorded “Stagolee” in 1928.

Folk artist Woody Guthrie makes the song into a tall tale ballad, characterizing that “mean ole Staggerlee” as a bad man, weighing 500 pounds and carrying a Gatling gun — though he kills Billy de Lyons with a “red-hot .44.” Guthrie tells us, as members of the jury, that we were all glad to see Stagger Lee hang. Guthrie recorded two versions of the song, “Stagger Lee” and “Stack-O-Lee” in 1931.

Wilbert Harrison of North Carolina got his start in music in the early 1950’s shortly after leaving the Navy. He began performing in a calypso style, but country and gospel filtered into his sound. (Listen to the stride-piano rhythm style in his left hand.) He’s best known for his hits, “Kansas City” in 1959 and “Let’s Stick Together” in 1962.

Lloyd Price’s hit reached No. 1 on both the pop and R&B charts in 1959. Little wonder, given the big, pounding production of the song, complete with chorus, wailing saxophone and Price’s own shouting vocals. A rhythm and blues figurehead of the ’50s and ’60s, Price was known fondly as “Mr. Personality,” a nickname taken from his other 1959 single, “Personality.” Price was a singer, bandleader, songwriter, producer, record company executive and, since 1998, a member of the Rock & Roll Hall of Fame.

The Isley Brothers – originally O’Kelly Isley, Jr., Rudolph Isley and Ronald Isley – perform “Stagger Lee” in 1964 on the British music television program, Ready Steady Go! Their version clearly owes a lot to Loyd Price’s, but given their incredibly intense, gospel-ish fervor, it’s easy to see why the Isleys — and the show — were such an influence on the British Invasion. The Beatles covered two of the Isleys’ other hits, “Shout” and “Twist and Shout.”

Singer-songwriter Johnny Rivers featured “Stagger Lee” on his 1965 album, Meanwhile (Back At The Whisky A Go-Go). After Beatlemania dominated the song charts, Rivers was the only American artist near the Top 10 in 1964 with his first LP, Johnny Rivers Live at the Whiskey A Go-Go. Several raucous, party-band, follow-up albums like this one kept that success going. Rivers’ Louisiana-soul singing voice and twanging guitar-playing made covering “Stagger Lee” a natural choice.

In his inimitable, return-to-roots style, the singer-guitarist Taj Mahal strips the “Stagger Lee” song down to his distinctive fingerpicking and his gruff-whispery voice, giving it a lilting yet quietly forlorn quality. Taj Mahal — born Henry Saint Clair Fredericks — recorded the song in 1969 and later with Taj Mahal and the Hula Blues in 2003.

In their slow-jam style, the Grateful Dead make “Stagger Lee” almost a funeral march, stretching it to over seven minutes. Robert Hunter’s original lyrics are also unheard in any other version (“Delia went a walking down on Singapore Street / A three-piece band on the corner played “Nearer, My God, to Thee” / But Delia whistled a different tune.”) This is from a live concert on New Year’s Eve in 1978 for the last concert at San Francisco’s Winterland Arena — heard on the 4-CD live album, The Closing of Winterland.

Sleepy LaBeef’s melodramatically rich, booming voice — along with plenty of piano and guitar solos — makes for a high-energy “Stagger Lee” with a rockabilly sound that nearly counteracts its murderous scenario. Sleepy LaBeef, born Thomas Paulsley LaBeff, recorded the song in 1994 for his album, Strange Things Happening.

The English actor is best known for his lead role on TV’s House. But Laurie is also a blues and jazz fan and an accomplished pianist who’s played with some of Louisiana’s finest, including Dr. John and Aaron Neville. He performs this — one of the most recent renditions of “Stagger Lee” — in a Hollywood studio in 2013. The song is featured on Laurie’s second album, Didn’t It Rain, and no surprise, it has a lot of New Orleans flavor.

Will Power Interviewed on KERA's Think