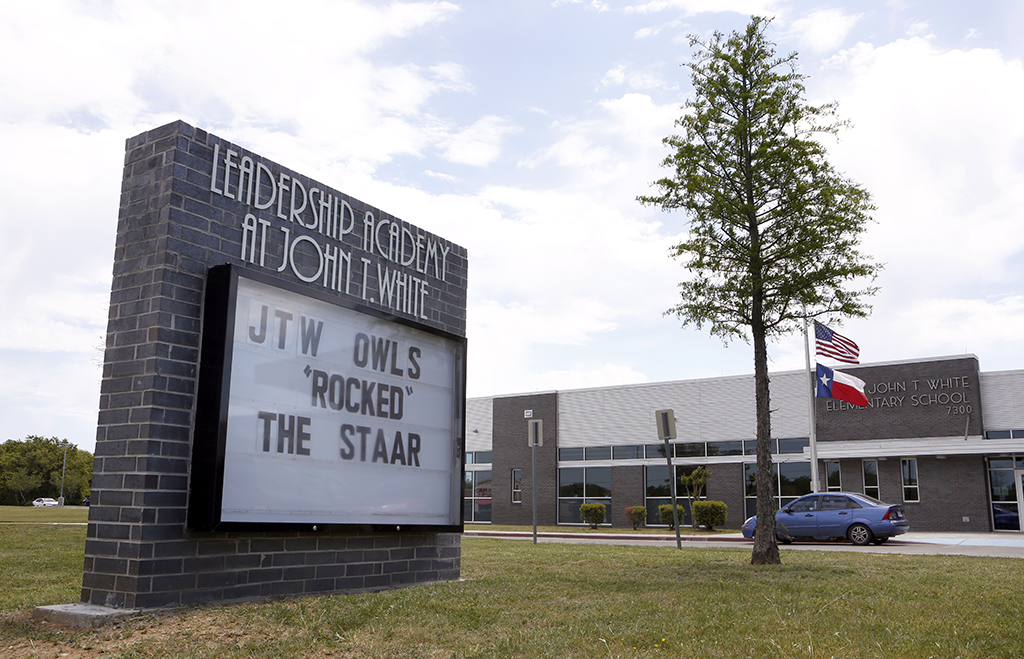 Opened in 2011 to relieve crowding at other nearby schools, John T. White Elementary School in Northeast Fort Worth has always been on the state’s “Improvement Required” list. With the hopes of turning things around, Fort Worth ISD this school year designated John T. White as one of five “leadership academies.” Officials say they’re already seeing positive improvements and hope the test scores back them up.

The Fort Worth school district is pouring resources into five low-performing campuses, retooling them as leadership academies. The effort is supported by a $1 million contribution from the Richard Rainwater Charitable Foundation.

Read more on accountability in the series introduction as well as our feature on Mitchell Boulevard.

Fort Worth ISD declined to let KERA report from inside John T. White for this series, saying administrators were focused on improvements at the school. However, the district did make officials available to talk with KERA about what’s going on.

The young elementary school has faced many challenges — academic and otherwise.

White has a high percentage of at-risk students. That population skyrocketed from 26 percent in 2012-13 to 74 percent last school year.

Since the school opened, it has had a high percentage of students who are considered economically disadvantaged . Last year, it was almost 90 percent.

Mobility is the big issue at John T. White. The mobility rate was 40 percent during the 2015-16 school year (the most recently available), meaning nearly 300 students weren’t there for six weeks or more out of the school year.

Some students at John T. White and other low-performing schools who are mobile have a two- or three-week gap of education, according to Karen Molinar, chief of elementary schools for the district.

Both Molinar and Priscila Dilley, who oversees elementary leadership academies, say White’s high mobility rate prevents students from having a sense of community.

“John T. White struggles with having that community school feel, because there’s not like a group of folks that, you know, ‘That’s my neighborhood school’ and ‘That’s like where we’re all from,'” Dilley said.

Click and drag on the image for a 360 view of John T. White

The mobility rate at John T. White can be partially attributed to the school options nearby. Students are close to the Arlington school district as well as a new charter school. John T. White also serves many students living in apartments. Families are often on a limited budget and searching for the best apartment deal, even if the lease begins in the middle of the school year. This constant moving around disrupts students and teachers.

“When you have kids in and out, it creates gaps. So it’s like you’re starting over. Students are coming in with instructional gaps. That can be a challenge for teachers,” Dilley said.

Officials are trying to address the problem by reaching out to parents and making home visits.

“We’re also trying to work with parents and say, ‘Hey, keep your student here,’” Molinar says. “Like, ‘What can we do?’ So when they’re trying to withdraw them, we’re trying to assist to see how we can get them to stay.”

Officials are also talking with apartment managers to ask them to move their lease specials to the summer or offer incentives to kids in apartments who bring home report cards. The district’s also added bus routes to help students in apartments get to and from the school.

‘What You Cannot Buy’

As the first year of the leadership academy program wraps up, district officials say they’re seeing changes at the selected schools. Molinar credits the educators who were brought into these struggling schools to turn them around.

“The teachers who took on the leadership academy assignments have astounded us about their dedication and their love for the students — our most at-risk students,” Molinar said.

She says what the state measures as success — like performance on standardized tests — is different from what district officials see as success on these campuses. Tests are important, district officials say, but they also want to see if there’s been a culture change in the schools, if the kids are more engaged in learning and if teachers have developed better relationships with the parents.

“We have seen teachers show up at birthday parties for students,” Molinar said. “They are so invested in these students, just not during the school day. And that’s what you cannot buy. Doesn’t matter what the stipend is. They’re not doing it for the stipend.”