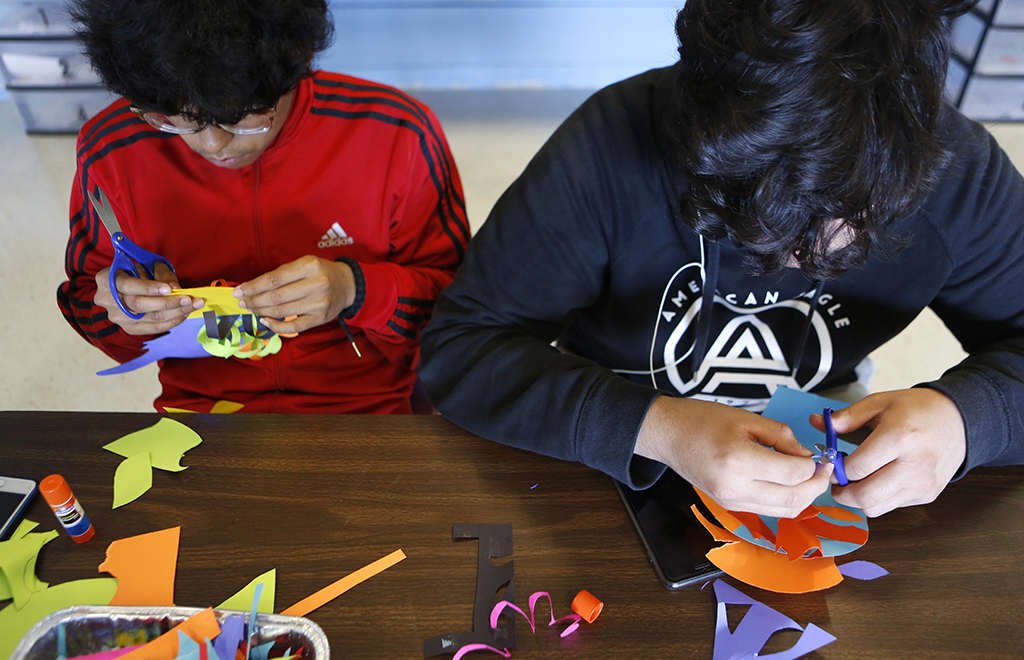 Once on the state’s list of failing schools, Pinkston High School in Dallas has managed to turn things around. It has met state education standards for the past three years. Now, with the nearby Edison Middle Learning Center closing, Pinkston is preparing to take in hundreds of younger students coming from the struggling school.

“There was just this culture of low expectations,” he said. “That’s from instructional and even just to the climate itself.”

Pinkston was just two years away from facing serious consequences. If it earned the accountability rating of “Improvement Required.” for five years in a row, the state could have shut down the school or taken over the district. For more on accountability, read the introduction to this series.

“Some things I saw were shocking. You had outdated equipment. We were worksheet rich,” Simmons said. “There were kids in the hallways. The instruction was very poor quality. How can you blame kids for not wanting to go to class because they were bored?” 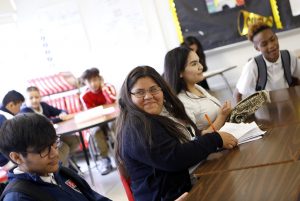 For years, the high school, located in the heart of West Dallas, flirted with closure by the Texas Education Agency. As Simmons mapped out a new plan for a better Pinkston, the school remained burdened by its past. Just ask eighth-grader Alexis Razo. She goes to Edison now. She refuses to go to Pinkston next year.

“My dad doesn’t have too good an opinion of Pinkston,” she said. “He said Pinkston is off-limits. My uncle went there, and he says that he got in a lot of fights, and it just wasn’t good.”

That was a decade ago. History teacher David McDaniel says things are better now, but it took work. He arrived a year ahead of Simmons, the principal, after teaching in Lubbock.

“I was at a pretty wealthy school out there, and anybody can teach out there,” McDaniel said. “It’s pretty easy. Those kids are going to show up on time. They’re going to do their homework without asking. It’s not really a challenge, and so it’s kind of boring. When I got here, I had to be much more creative.”

Changes that paid off

At Pinkston, 92 percent of students come from low-income families. Many live in public housing, others in apartments or old wood-frame homes with chickens in the yard. The school sits in one of the poorest neighborhoods in Dallas. Median household income is just over $11,000, according to the Census.  Nearly three-quarters of Pinkston kids are Hispanic; a quarter are African-American.

When McDaniel got here, fewer than half of Pinkston students could pass math or English. 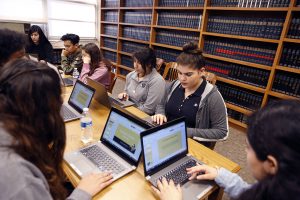 “I had to change the way I taught and I had to teach reading and writing in my history class when I started,” he said. “I didn’t know what I was getting into; nobody really prepared me for that. But once I got here, a lot of the staff I grew close with and developed relationships with, we worked together and found ways to do that.”

Simmons added discipline and new technology.  He asked teachers to stop lecturing so much, and have kids talk more.

“At one time, students were there sitting to get it, and this time students would sit there and like to ask questions. They push the teacher and want to know more and more,” Narcisse said. “At the same time, it caused teachers to push the students to get more and more, where it’s not a teacher-driven class, it’s a student-led class.” 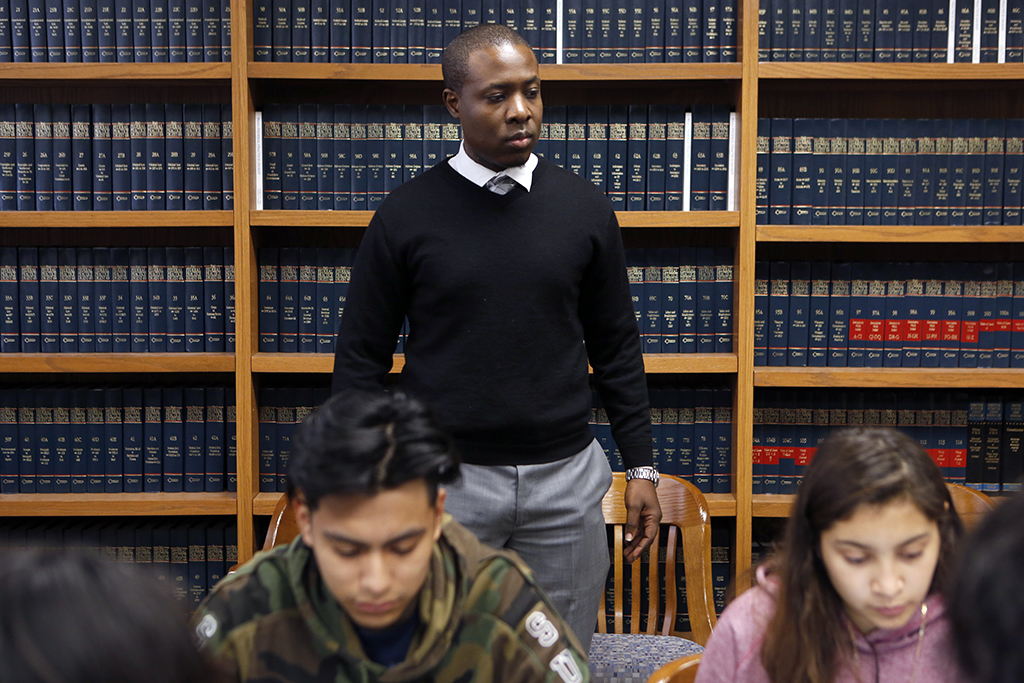 In Narcisse’s student leadership class, which is new this year, kids can attest.

“In my first year of school, I noticed that most teachers were like, ‘Hey I don’t care what you do as long as you’re quiet and sitting down,’” said Ana Alvarado, an 18-year-old senior.

But later, more teachers were hired and they introduced new ways of doing things, she said.

“They make it sort of simple and challenging at the same time,” she said. “And I believe when they give you a challenge, the student wants to do it.”

Back when Alvarado was a freshman, the challenge for Pinkston was improving test scores. Since the arrival of Simmons, Pinkston has earned the state’s passing grade, “Met Standard.”

“We embrace the ‘failure is not an option’ model,” Simmons said. “If we focus on good quality instruction, providing a safe and civil learning environment, then the scores will take care of themselves. Again, it’s not about scores, scores, scores. We try to improve the learning experience for each student.”

Next year, Pinkston will gain its youngest students ever because nearby Edison Middle Learning Center is closing. Edison earned the state’s failing rating for five consecutive years, and to avoid state intervention, officials decided to shutter the school. Pinkston will take in Edison’s seventh- and eighth-graders.

Simmons stood in the back of Pinkston, where Edison students will be set up. 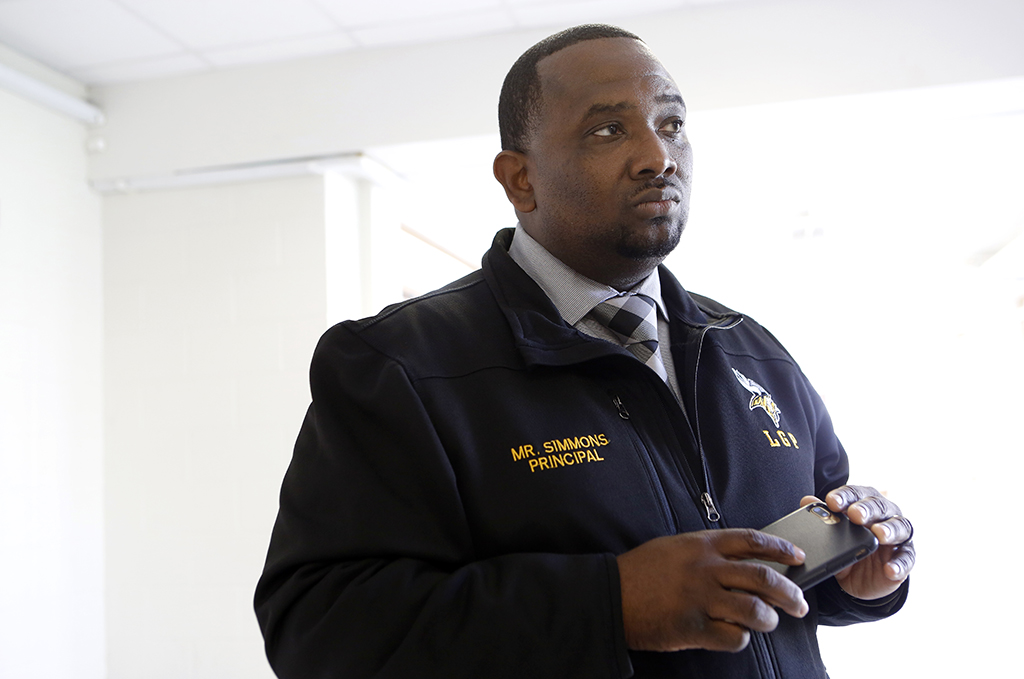 Principal Dwain Simmons gives a tour of some of the areas that will eventually house Edison students on April 4, 2018. Photo: Lara Solt

Simmons says Pinkston will be ready for Edison’s kids. They’ll get the same education he and his staff have worked hard to deliver since he got here. Eventually most will end up here anyway, like Edison eighth-grader Gilbert Hernandez.

“I applied for the collegiate side of Pinkston, so I don’t mind going there,” he said.

The 14 year-old likes the choices offered at Pinkston, like the collegiate academy, and the different “pathways” kids must choose, like business, health and technology.

“I’m going for business. I started paying attention when they started doing it last year and one of my friends went,” Hernandez said. “It’ll get me on track and when I get to college, I’ll already have two years ready.

Before Hernandez and incoming students even finish high school, construction on a brand-new Pinkston will start just down the street. And current plans will convert the old Pinkston into the new middle school.