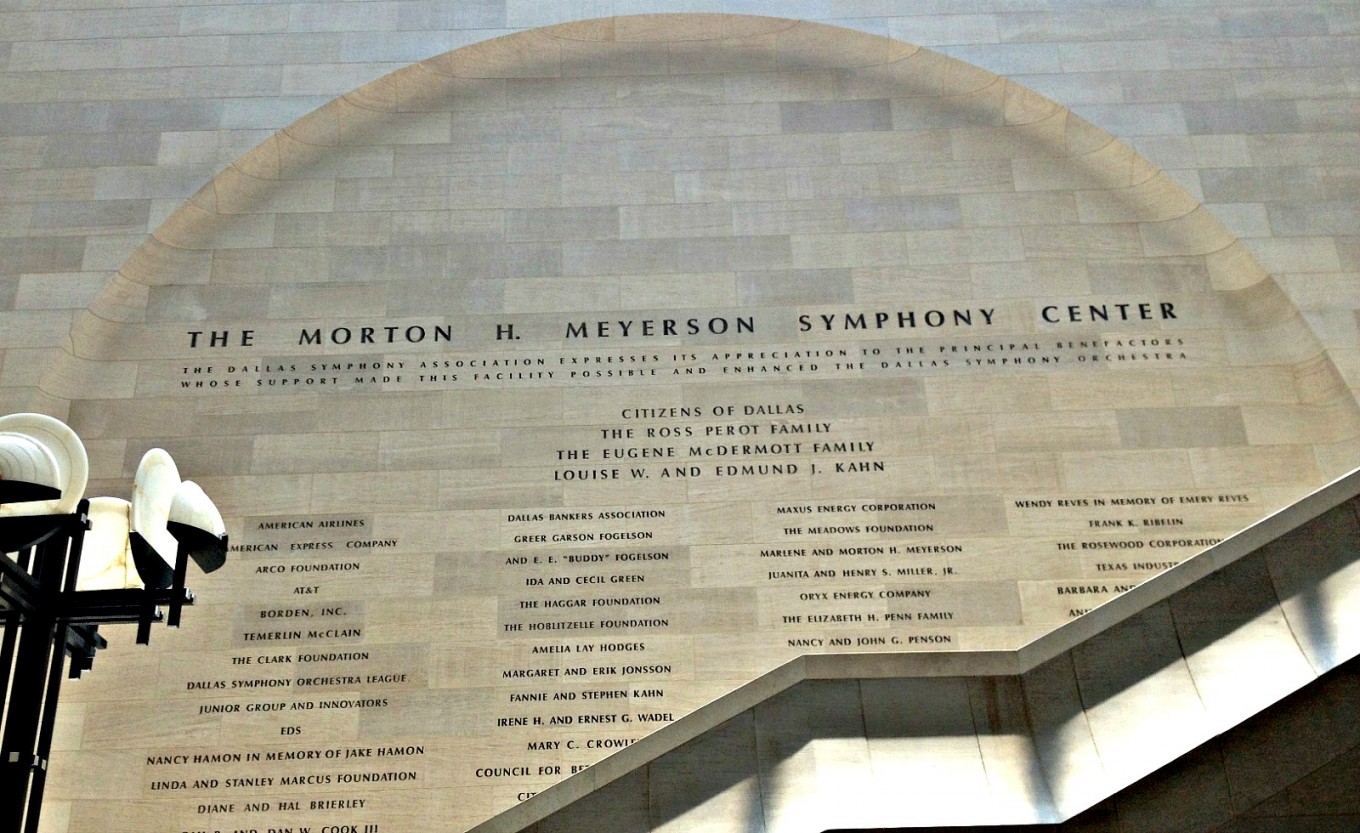 Yet Meyerson himself still feels conflicted about having his name carved into the entrance wall.

“Part of me is embarrassed,” he admits. “I came from a middle-class family in Fort Worth and I am the grandson of immigrants. So I basically have lived the American Dream. Even in an American Dream, you don’t think that your name will be on a symphony hall. So for me it is slightly intimidating and slightly embarrassing.

“But it is not so embarrassing that I can’t take joy in it.”

Mort Meyerson on the embarrassment – and joy – of having the building named for him.

Meyerson says this while seated in his famous home, the Power House, so-called because it’s a converted power station overlooking the Katy Trail. For a man who made a fortune in electronic data processing, his home is an impressively old-style, hard-edged industrial space – all concrete, brick, steel beams, rivets, conduits and glass. It’s an old-style industrial space — now full of modern art, photographs, sculptures and sleek furniture.

Meyerson’s name is on the symphony center because his former boss, Ross Perot, donated $10 million to it. Perot insisted it be named after the man who headed up the effort to build the hall. Meyerson may feel awkward about his name being on the hall, but he’s extremely proud of the hall itself – what it achieved, what all the people who worked on it accomplished.

“We set out to build the greatest symphony hall since the 1700s,” he says. “That’s a very big, ambitious program. And we set out to do it, and I think we did.”

It’s not exactly that easy

Thirty-five years ago, when then-DSO chairman Robert Decherd asked him to lead the committee to build a new concert hall, Meyerson was taken aback. Decherd had not even told him what their breakfast meeting was about.

Meyerson had to referee some big disagreements between architect I.M. Pei and acoustician Russell Johnson.

Meyerson had just become the head of EDS, the firm founded by Perot. He had no experience in construction, city politics or orchestra management. But he had been feeling the need to do something more than work and family. And there was something more, something he didn’t think Decherd actually knew: Meyerson had been trained in classical music – singing at three, playing piano at four, joining the choir at UT-Austin.

“I’d had music in my life — forever,” he says. “And so I thought to myself, how perfect that I’m being asked to work on something that’s been so fundamental to my being that I can actually utilize some of the talent I have – and make a contribution to the community.

What followed that decision were ten years of political uproars, wrangles over budgets and mediating disagreements between architect I. M. Pei and acoustics expert Russell Johnson. Meyerson says even with all that, what surprised him the most was simply building the hall.

“I just assumed you planned it, you got drawings, you bid it out and you built it,” he says. “Well, it turns out, it’s not exactly that easy.”

With the hall’s swirling windows and its reverberation chamber, the building is an incredibly complicated piece of engineering. Two examples: The acoustical canopy over the stage weighs 42 tons. Moving it up and down safely requires 42 tons of counterweights. Audiences don’t know those massive weights are there because they’re hidden inside the reinforced walls. Even the Meyerson’s serene, cool lobby is in tension: It’s essentially cinched together with a giant steel hoop hidden inside the limestone that runs around the overhead circumference.

In the last months before the official opening, completing the Meyerson was a mad dash to get seats installed, marble flown in from Italy and rushed through customs. Joe Walker says, during all the madness, it was Meyerson who held things together, kept things moving. Walker is the retired CEO of J.W. Bateson, the construction company that built the Meyerson.

“Meyerson always was a positive force. He was always there to make things happen. And he was determined to see this building to its completion.”
Joe Walker

Five years before the Meyerson opened, the Dallas Museum of Art was the first cultural facility to go up in the Arts District. But a single building doesn’t make a district. In 1989, the Meyerson Center and its success elevated the District’s possibilities, its potential. It said, what was first imagined in 1977 in the Carr, Lynch Associates’ “comprehensive plan” for Dallas’ arts facilities was going to be real. And it’s going to be ambitious.

When the Meyerson opened 25 years ago, it signaled that Dallas would indeed have an arts district. Here’s Meyerson on what most impresses him about the Arts District today, and what is still lacking.

But these days, Meyerson says, the Arts District still is not everything he’d expected. It’s not Paris, it’s not Soho. It’s not a living neighborhood — with people, seven days a week and at night, walking around, shopping and eating and attending performances and exhibitions.

“I think what we’re missing is a talent pool of affordable housing,” he says. “It just doesn’t exist down there. So it’s got its limitations. But compared to the dairy that was on the site where we built the symphony hall, we’re a long way down the road.”

Twenty-five years down that road, the question becomes, what’s next for the Meyerson – and the DSO? Meyerson himself believes live classical music will continue, but its future lies with concerts in halls combined with some mix of live streaming, simulcasting in theaters, video productions for handheld devices – all of this bolstered by the necessary return of classical music to public education.

Just how all that might happen, he says, “I’ll leave to the gods.”

Meyerson says no one knows what the future holds for classical music.

But Meyerson says choices made in the earliest days of designing the concert hall already point to that future. Way back in 1980 – when few people were even thinking about such a thing – his planning committee actually anticipated a wired-up, video-ready symphony hall.

“When we were designing the hall, we said that we’re going to oversize the cables, so that we’d be able to do productions in the hall. All the channels are there, all the wiring possibilities are there,” he says.

Then he adds with a smile: “All we’re going to need is somebody with a vision who wants that to happen.”

The DSO’s current administration says, yes, these possibilities are currently being weighed and considered.

Guide To The Site