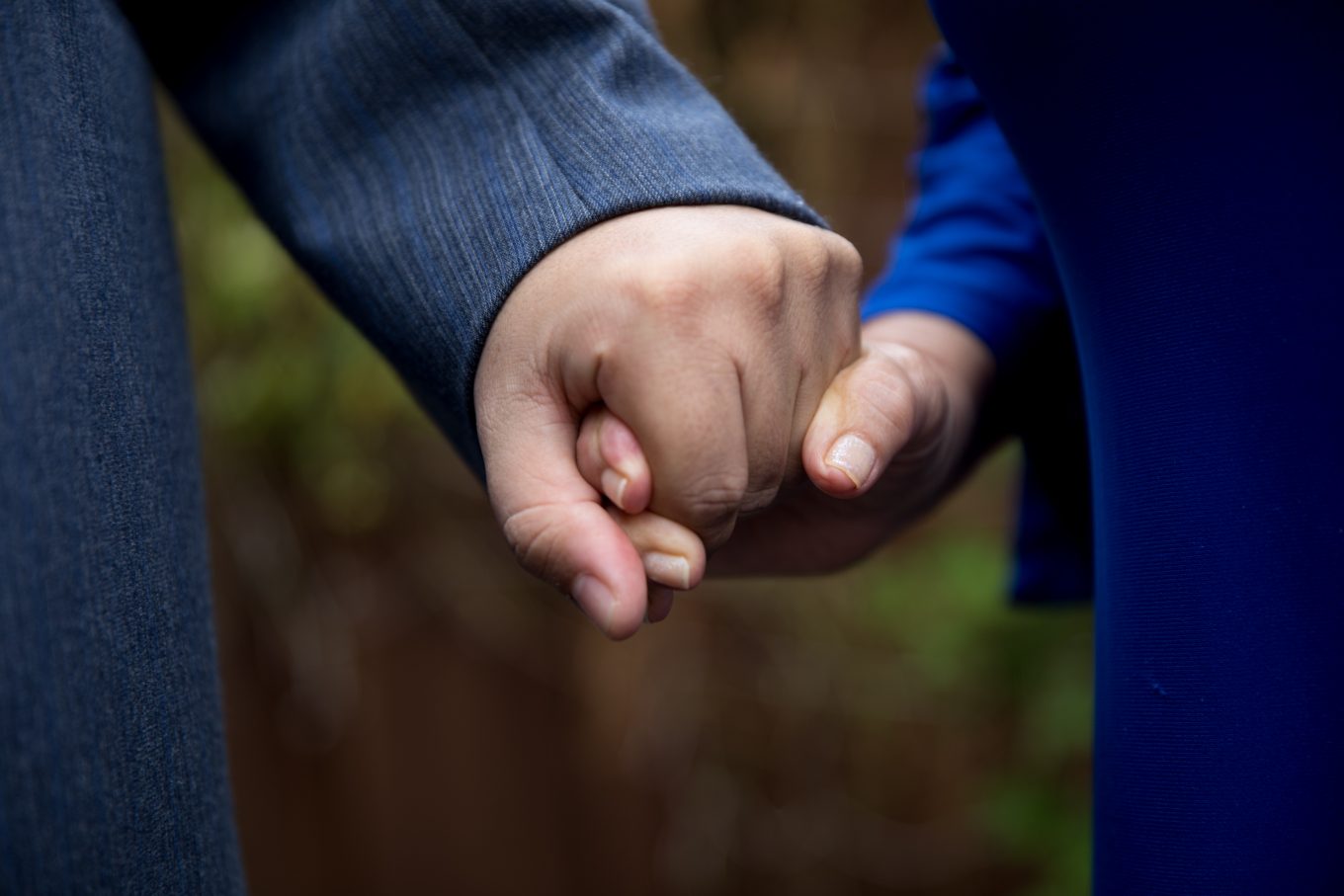 A Dementia Diagnosis Transformed Their Family

Living with a mental illness can be daunting. Caring for someone on that journey comes with its own unique challenges. One North Texas man adapted his life to become a caregiver when his mother was diagnosed with dementia. Now he’s trying to balance her treatment, his career and their new day-to-day.

On a sunny afternoon at the Dallas Zoo, Tech Guerrero stands behind his mother Maria Luisa Castillo Rocha’s wheelchair, snapping photos of lions in an enclosure. The family is here for the zoo’s Wild Gatherings program, designed for people with early-stage dementia.

The program gives Guerrero a chance to connect with other family caregivers from across North Texas, sharing advice and anecdotes. His mother gets to embrace nature. 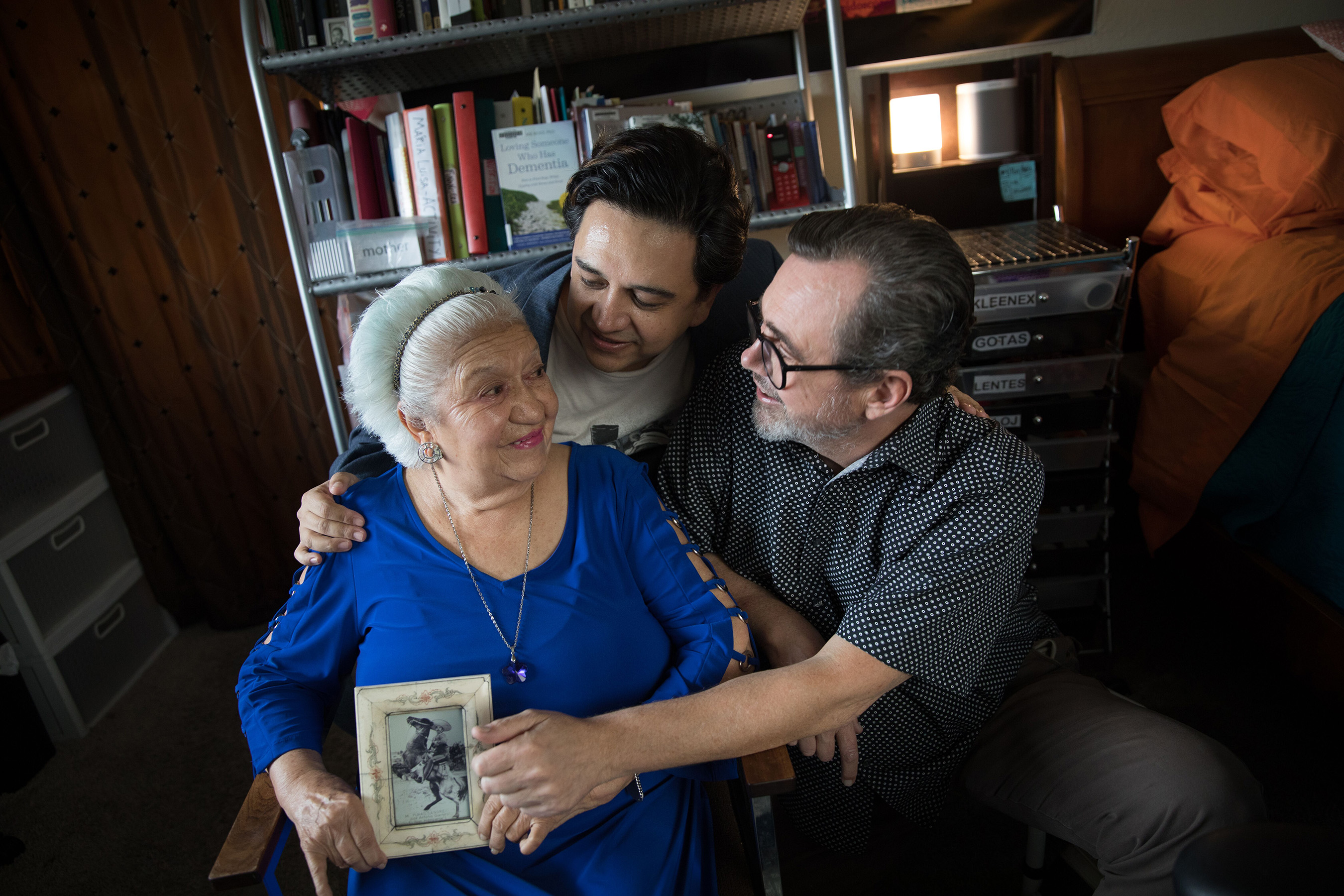 “She’s a retired banking manager for international banking in Mexico City, so she used to be very social and very verbally engaged,” Guerrero says. “And we’re here because we’re hoping that she will oil those motors of social engagement.”

>>WATCH: Tech Guerrero go through a typical day caring for his mother.

Castillo Rocha is 90 and has been diagnosed with vascular dementia. Symptoms can include trouble paying attention, problem solving and slower thinking. Decades ago, Castillo Rocha mentored other young women in her professional life. Friends and coworkers knew her as a great conversationalist, someone you could confide in.

“I did not learn that my mom had any form of dementia until probably one or two years after she had been diagnosed,” Guerrero says. “And obviously, being the person affected by it, she didn’t really pay a whole lot of attention to it.”

Guerrero got worried when his mother started showing symptoms, and he began making longer visits to see her in Mexico City. It took some convincing, but eventually, they decided she should move to Dallas.

Today, Castillo Rocha’s new home is optimized for her care. Guerrero stores her pills in plastic bins, neatly labeled and stacked in one of his closets. On the patio, Guerrero’s husband Michael Street keeps a lush garden where Castillo enjoys some of her meals. The home is dotted with smart speakers and calendars, outlining the radio shows she likes to listen to. Street demonstrates how he can control the programming from his phone.

“Every one of these are what radio station it’s supposed to be on throughout the day, all in Spanish obviously, from different parts of the Latin speaking world,” Street says. “So she never has to be bored, no matter what room she’s in.”

They also take Castillo Rocha to weekly group activities where she socializes with other seniors. Tech Guerrero says that time is precious. It gives him a chance to catch up on his own responsibilities.

It’s easy to look at his calendars and his neat stacks of medication, and think Guerrero has it all figured out — but becoming a caregiver has been a learning process, one he tries to approach with humor. 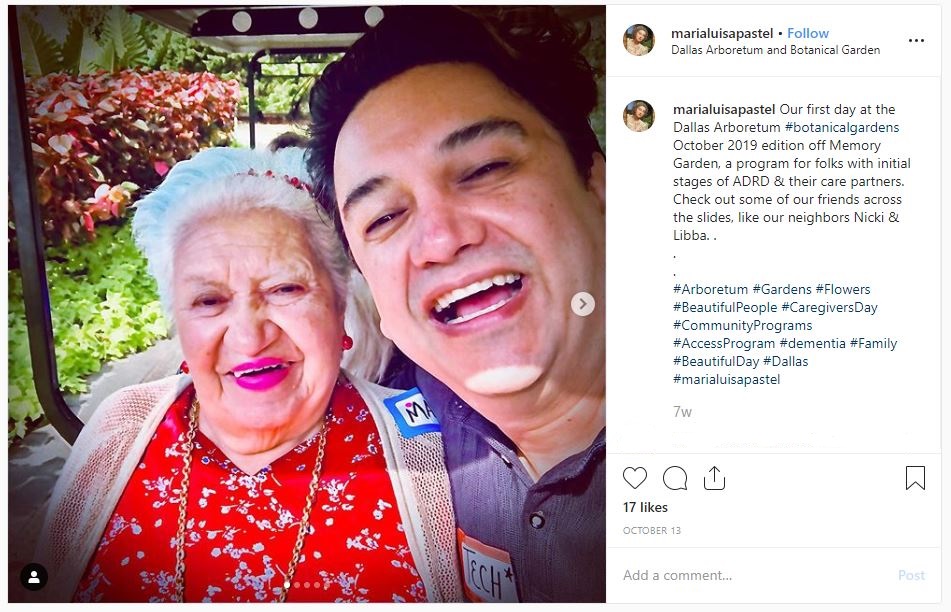 Tech Guerrero maintains an Instagram account for his mother. This post shares their first day at a Dallas Arboretum program for people with early stage dementia and their caregivers.

“You’re going to hear lots of advice, but you have to filter it according to your own life status,” he says. “In our family, sense of humor is vital. It’s paramount. So by every now and then, calling ourselves her dads. We’re like the gay dads … Papa and Daddy or something, and she jokes about it constantly.”

Since taking on this role, Guerrero has left his office job and is now freelancing, though he looks forward to going back to work full-time one day.

It’s a familiar trade-off for the estimated 41 million family caregivers across the country. A recent report from the AARP’s Public Policy Institute estimates that in 2017, they provided 34 billion hours of care to loved ones. That’s $470 billion in unpaid labor.

“Caregiver’s duties at first may be light, but overtime as the disease worsens, the caregiver, their duties can turn into 24-hours-a-day, seven-days-a-week,” says Imelda Aguirre with the Dallas and Northeast Texas Chapter of the Alzheimer’s Association.

She says many people find themselves caregiving without proper training.

“At first, I mean the caregiver is really overwhelmed with not knowing where to go or what to do or what resources they have available,” Aguirre says.

The Alzheimer’s Association has a 24-hour helpline, as well information on warning signs, like mood changes and confusion with time or place.

“The Alzheimer’s Association recommends that if you are experiencing memory loss, that you see your primary care physician, and ask questions, but also to take the next steps and visit a neurologist,” Aguirre says.

Work is underway to help America’s caregivers. Last year, President Donald Trump signed the RAISE Family Caregivers Act into law. It established a new advisory council which has been working on a national strategy for caregivers, exploring issues like financial security and training — tools that could have helped Tech Guerrero and Michael Street find their way as caregivers.

“Everyone’s in a similar boat in terms of daily challenges, but I would say be forgiving with yourself for the errors that you make,” Guerrero says. “Take notes every day, and try to simplify life where you can.”

NEXT >>Teachers and school counselors are often the first to notice when a student is struggling. Ashley Williams, a counselor from Central Elementary School in Seagoville, shares in her own words how she set up a special locker where students can leave her private notes sharing their feelings. Read and listen to Ashley’s story.

More Personal Moments From 'The Caregivers'

A Toolkit For Family Caregivers