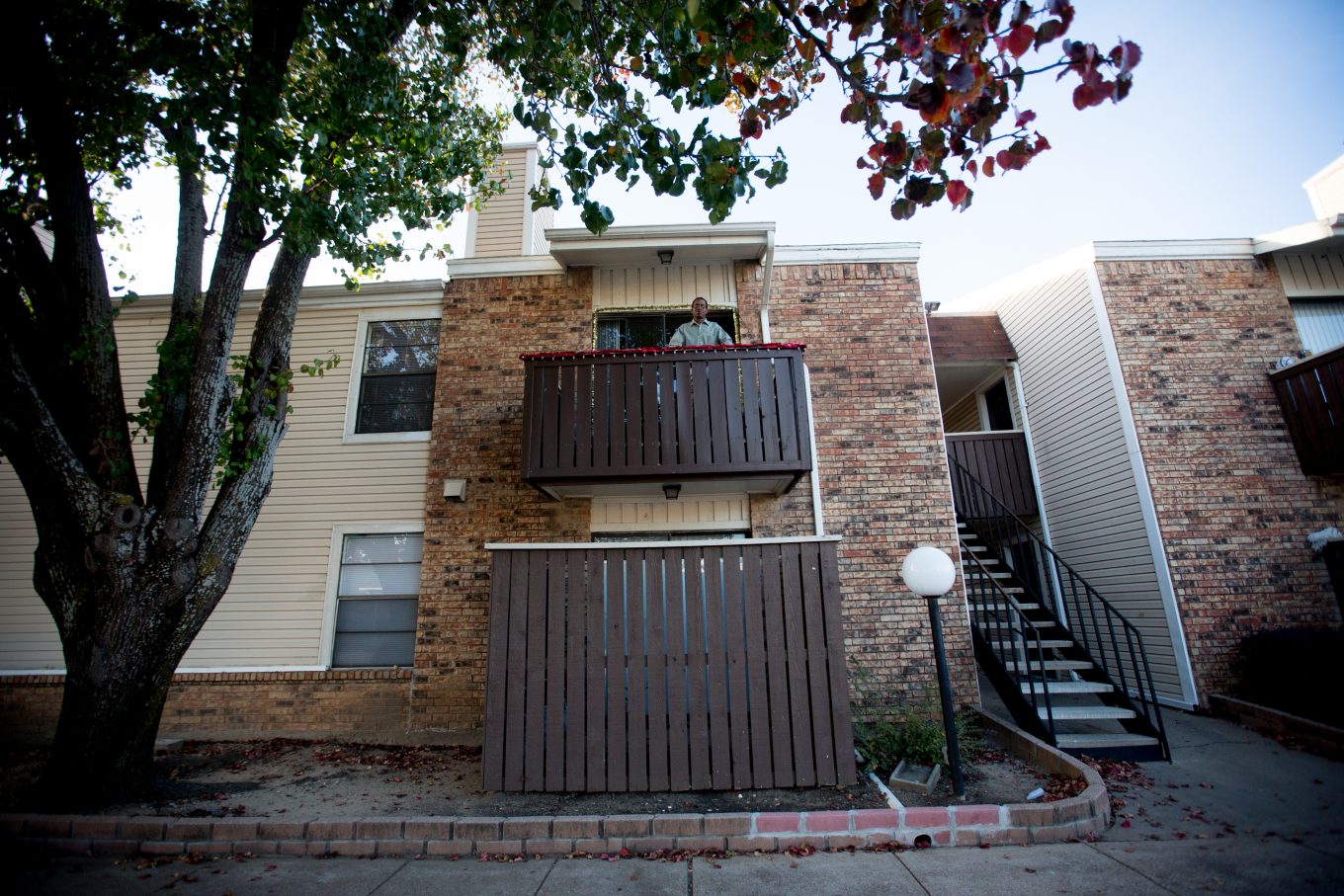 Hurricane Harvey evacuee Lewis Small on the balcony outside his new apartment in Fort Worth, Texas.
The KERA Radio story

Hurricane Harvey claimed lives, homes and people’s sense of security. At least 120 families that sought refuge in North Texas have decided to stay here. One man who’s starting over in Fort Worth hopes to forge a new career path — something that would have been much harder to do in Port Arthur.

Spend an hour or two with Lewis Small and one thing quickly becomes clear: The man is fastidious. His apartment is sparkling. There are no dishes in the sink. The table is perfectly set at all times. He wakes up at the crack of dawn every day to iron his clothes, eat breakfast and pack his lunch for work.

Then, he leaves his Fort Worth apartment for his job at the neighboring car wash. He’s never late. 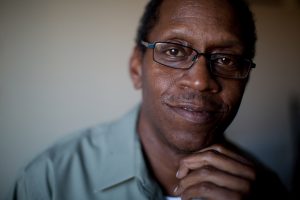 Lewis Small hopes to work in a warehouse in the future. Photo/Allison V. Smith

“It couldn’t have been a better bless, to where I don’t have to catch a bus. I can walk to work; it only takes me two minutes,” he said.

Small likes the work, and he’s happy. In the long run though, he wants to work in a warehouse, driving a forklift, loading and unloading shipments. It’s the kind of job he wasn’t able to find in Port Arthur.

The most recent figure for unemployment in Port Arthur stands at 9.5 percent. Compare that to 3 percent in the Dallas-Fort Worth-Arlington metro area. In the month following Hurricane Harvey, Port Arthur’s unemployment rate jumped to 12 percent.

Small says that’s the main the reason he decided to leave his flooded apartment behind and head to North Texas. 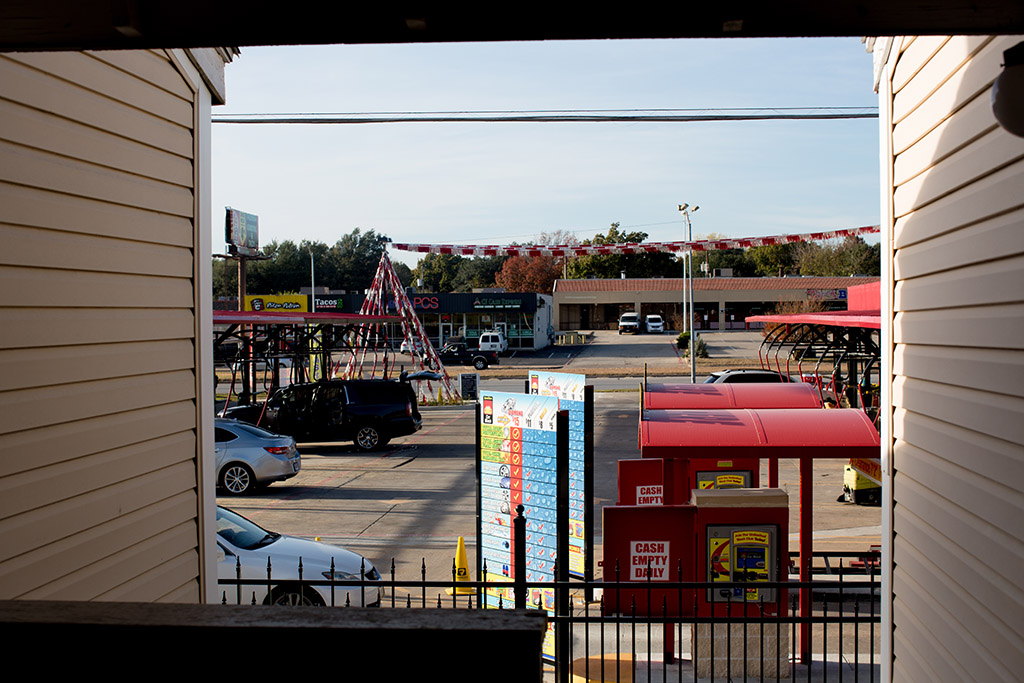 A view of the car wash where Lewis Small now works across from his apartment. Photo/Allison V. Smith

Getting to there was a harrowing ordeal. Small and his cousin shared a first-floor apartment in Port Arthur, which they fortified with sandbags. The water got in anyway, and it was knee-high by the time they climbed to the second story of the complex to wait for help.

“The sofas and the beds [were] already flooded. So we went upstairs to the second floor to the breezeway. We had a chair and we both had a blanket, and that’s all we had.”

And so they waited. Small and his cousin spent the night up there, sleeping in chairs the best they could. He says helicopters arrived to evacuate people with medical conditions first. Then, help came for them.

“Volunteers with boats came got us, and they told us we could only take one bag of clothes apiece, and that’s what we did. The rest we had to leave behind.”

And he didn’t really look back. He landed, with his one bag of clothes, at the Wilkerson-Greines Athletic Center shelter in Fort Worth. 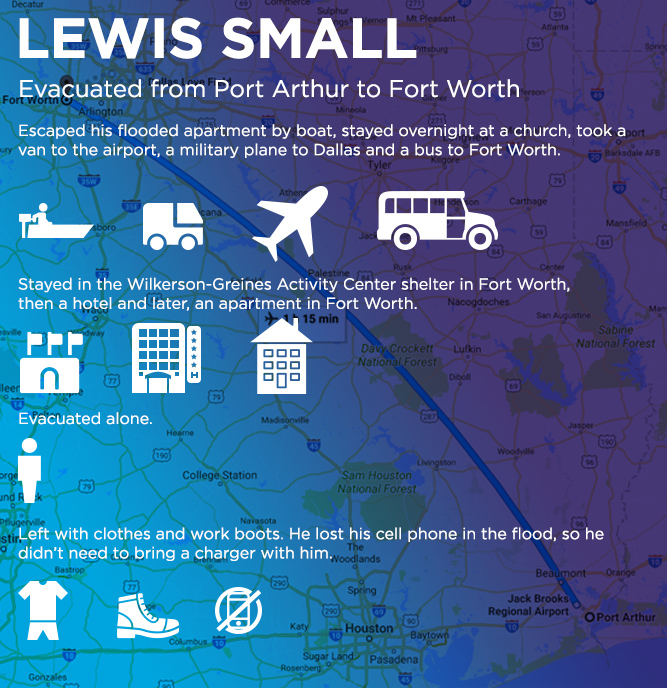 After a few weeks there, and a few more in a hotel, Catholic Charities Fort Worth and Fort Worth Housing Solutions helped him find an apartment. He’s confident a long-term job will follow.

“Well, they’ve got more opportunities out here,” he said. “They’ve got plenty of warehouses out here.”

Laurie Larrea, who’s president of Workforce Solutions Greater Dallas, would agree with that assessment. She can’t say the same for the job market in Port Arthur.

“They’ve gone through some really hard times in the last several years, starting back with Ike, and the latest with Harvey. And they haven’t really gotten to recoup the losses, and I think it shows in the marketplace.”

The most recent figure for unemployment in Port Arthur is 9.5 percent. In Dallas-Fort Worth, it’s 3 percent.

Larrea actually lived in Port Arthur until she was 26. She says it’s a refinery city with some manufacturing mixed in too. The job market is not very diverse.

“It’s a wonderful place to grow up, I have to say. But it is a community that does not thrive on big highways and large shopping areas and downtown market as we do in the Metroplex.”

And, Larrea says, there’s high demand for skilled workers in North Texas. She says if Lewis Small, a man in his 50s, wants to move his career in a different direction, this is a good place to do it.

“Today, we’re working into our 70s — partly out of necessity but partly out of youthful energy,” she said. “So he may have a 20-year history left in the market. And there is definitely a talent need in this market.”

Small definitely has the work ethic to succeed in a new career. He puts in six days a week at the car wash. Six days, never seven.

He worships at Grace Tabernacle Baptist. Other Hurricane Harvey evacuees have also joined that congregation.

“My church family, Grace Tabernacle, they have been so wonderful to us — all of us from Port Arthur,” Small said.

On one recent Sunday, after the worship service ended, Small was still in his perfectly pressed church clothes. An impressive dinner sat warming on the stove.

“I started cooking at 3 this morning. I made a meatloaf. I got macaroni and cheese, mustard greens. I got red beans with ham hocks in it and a cornbread.”

It’s enough to feed a small army, which was what Small was going for. He invited people from church and folks he knew from Port Arthur to come over whenever it’s convenient. And if they couldn’t make it, he said he’d drop by later with a plate. 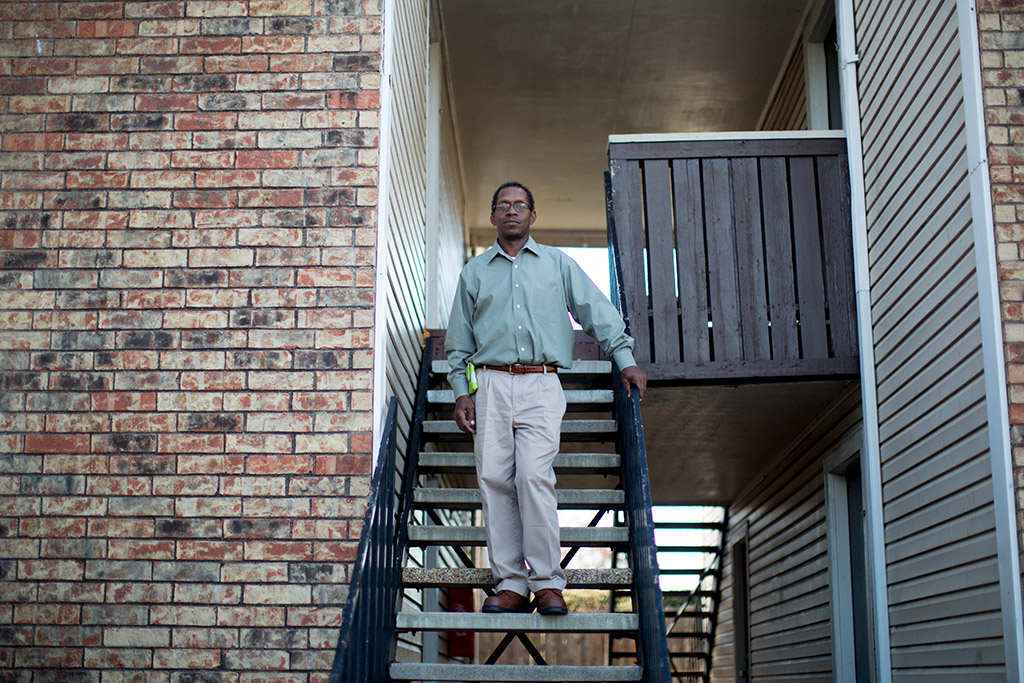 Lewis Small in the stairwell outside his new apartment in Fort Worth. Photo/Allison V. Smith

Flooded Out Three Times, A Houston Family Ran The Numbers, Made A Move