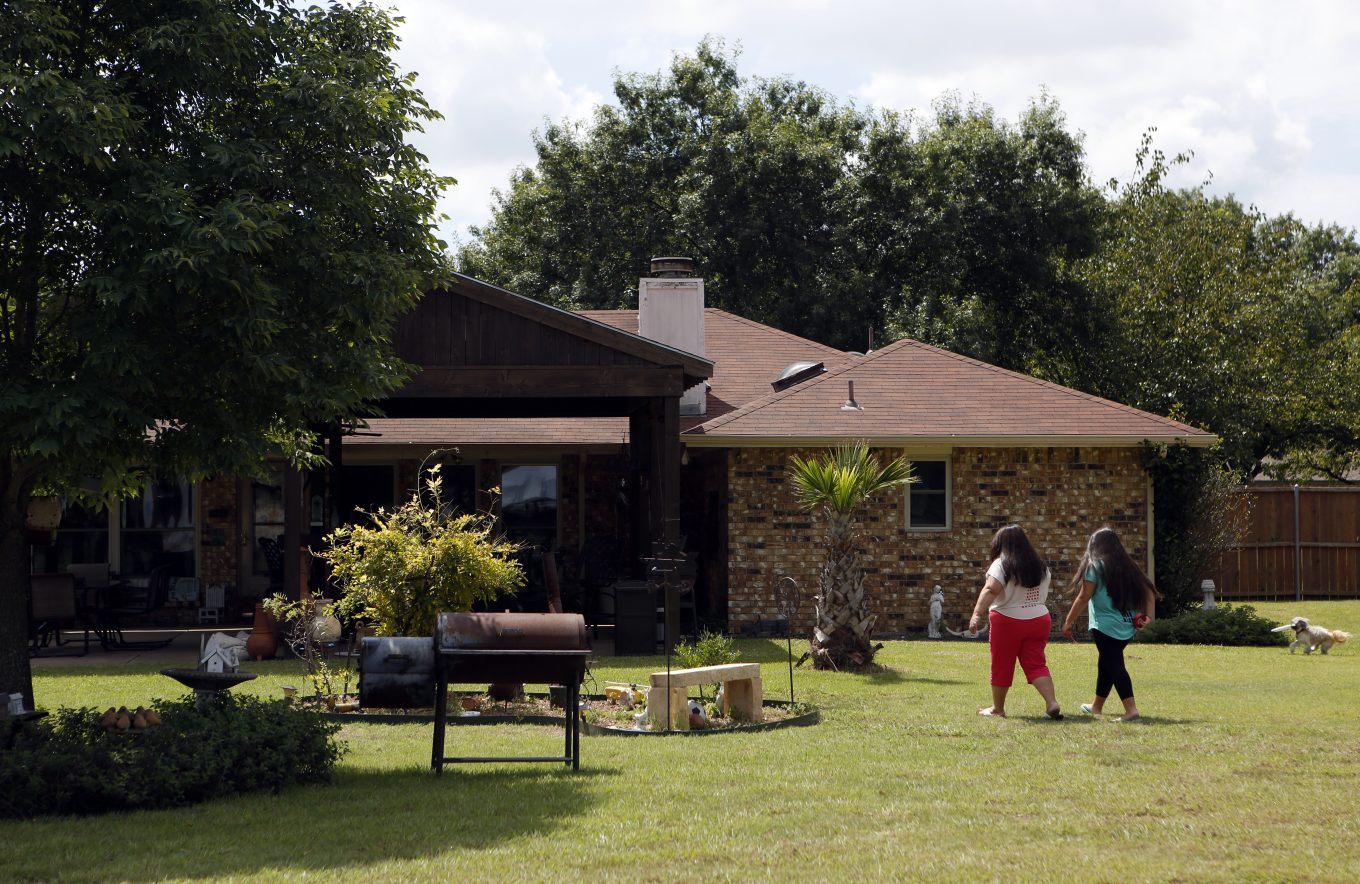 KERA’s series One Crisis Away: Drowning In Debt focused on North Texans struggling to pay back money owed. These stories struck a chord with KERA listeners—many commented that they could relate. Others weren’t nearly so sympathetic. Here’s a look at what’s behind the shame and stigma surrounding debt.

In the world of economic research people talk about “financial well-being.” Kasey Wiedrich with the Corporation For Enterprise Development in Washington D.C. explains.

“The concept of people being able to make ends meets today, be on track to meet their goals in the future, and have a sense of financial freedom to be able to enjoy life,” she says.

Translation: money for now, and later—something that’s difficult for a lot of people. Close to half of Texas families don’t have enough money on hand to last three months after a serious disruption to their finances. That may explain why so many people are in debt to begin with.

Wiedrich says folks with credit card debt or back taxes for example, aren’t inclined to talk about it.

“I think far more people are in those situations than perhaps recognize or disclose to others around them,” she says.

Because, people are ashamed of debt. There are many different kinds of financial hardship—a job loss or not being able to save for retirement, for example. But there’s something about debt that makes people feel like failures. 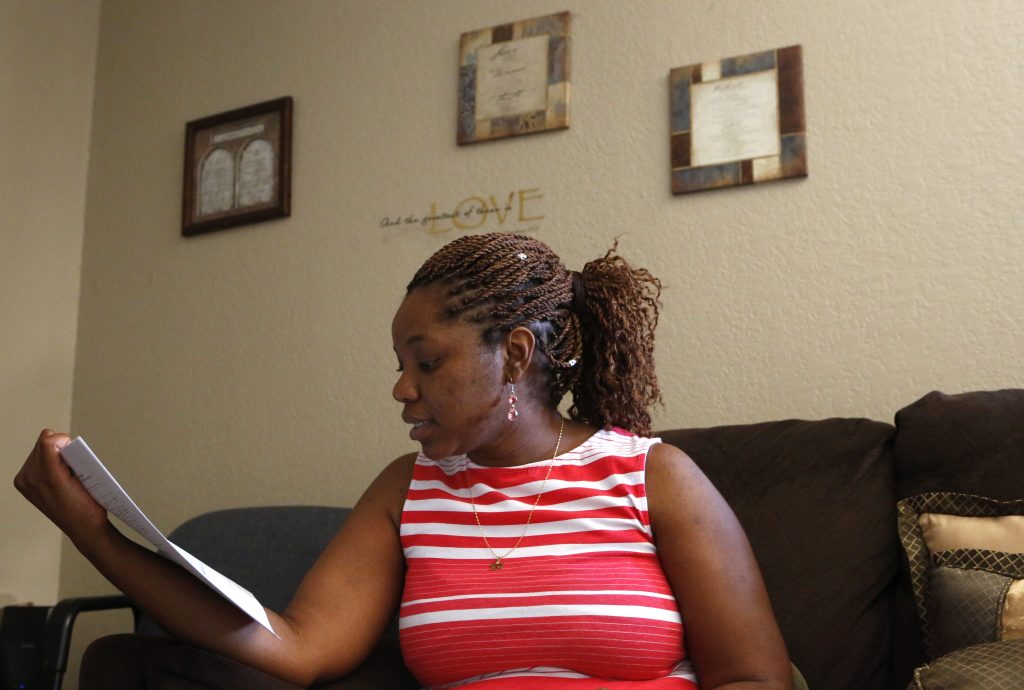 April Ford looks over papers in preparation for the new school year at her home in North Richland Hills. Photo/Lara Solt

Here’s how Fort Worth resident Angelo Collins describes it. In our series, we shared his story of falling behind on child support and paying down credit card debt.

“Kind of like a real gut feeling that I got punched, and someone took all the life out of me,” Collins says.

April Ford who also lives in Tarrant County, filed for bankruptcy about four and a half years ago. Here’s how she describes her state of mind before finally making that decision.

“Really depressing, it was stressful, it was overwhelming, it got really really bad, to a point where I just was like I’m tired and I want to give up but I knew I couldn’t give up because I have the kids,” she says.

And Katie Combest from Lewisville has $38,000 of student loan debt. The music teacher and clarinet player has enough money to live on, but can’t get a mortgage because she’s self-employed, and drowning in debt.

“It used to make me feel really horrible about myself, honestly,” she says. “Because people look at you like you’ve done something wrong, like a policeman when they pull you over, well you have this, and you don’t have a W2 and instead of having pay stubs, I have to show them my bank account.”

“I think that the concept of financial shame or sort of shaming people is maybe related to the fact that we just don’t talk about our finances enough.”
Kasey Wiedrich, Corporation for Enterprise Development

All three of these people are working and steadily paying back what they owe. They also feel guilty, and it’s not all in their heads. Here are just two of the dozens of social media comments posted about the series.

“Having a hard time feeling too much sympathy.”

Kasey Wiedrich from the Corporation For Enterprise Development explains.

“And I think there’s that sense of people that taking on debt may be a sign of perhaps you’re living beyond your means or you’re not able to manage yourself day to day and you’re having to rely on others to meet your obligations,” she says.

People who’ve worked their whole lives not to take on debt may have a tough time connecting with those struggling to get out from under it. Others may be comfortable with a mortgage or car loan but have no tolerance for high interest credit card debt. Wiedrich says it all depends on what someone believes.

“I think that the concept of financial shame or sort of shaming people is maybe related to the fact that we just don’t talk about our finances enough,” she says.

And judging by the reaction to these stories over the last six weeks, that conversation is beginning. 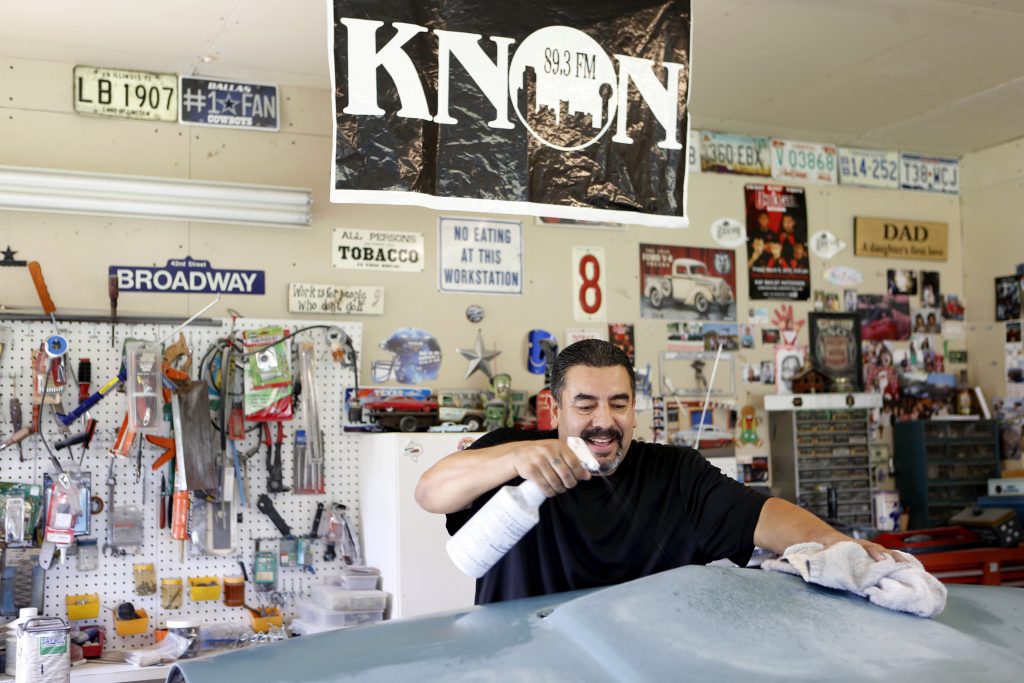 Rene Munguia works to restore a 62 Ford Thunderbird for a friend at his home in Ovilla, Texas. Photo/Lara Solt