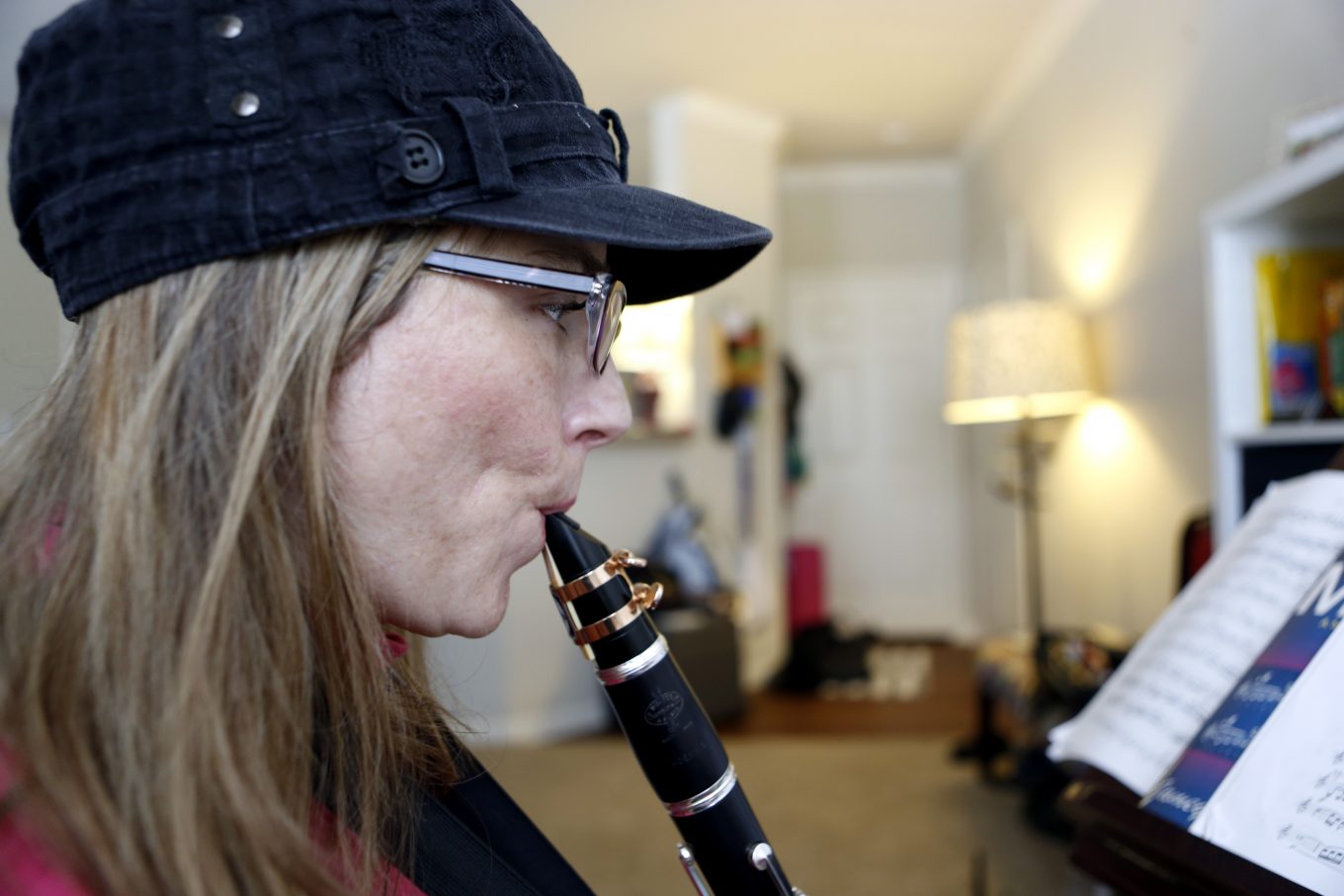 Katie Combest plays her clarinet at her home in Lewisville. Photo/Lara Solt
The KERA Radio story

America has a trillion-dollar problem: student loans. Some people borrow $200,000 for law school, while others take out $10,000 for a bachelor’s degree they never finish. One North Texas musician is somewhere in between. She has two undergraduate degrees — one’s paid off, but the other isn’t anywhere close.

When she was 13, Katie Combest found the clarinet by accident.

“I actually initially wanted to play saxophone and they ran out of the saxophone,” she says. “My grandmother was like ‘Oh, this is better because she can play in orchestra and band.'”

“I got the clarinet and I loved it.”

And it loved her back. 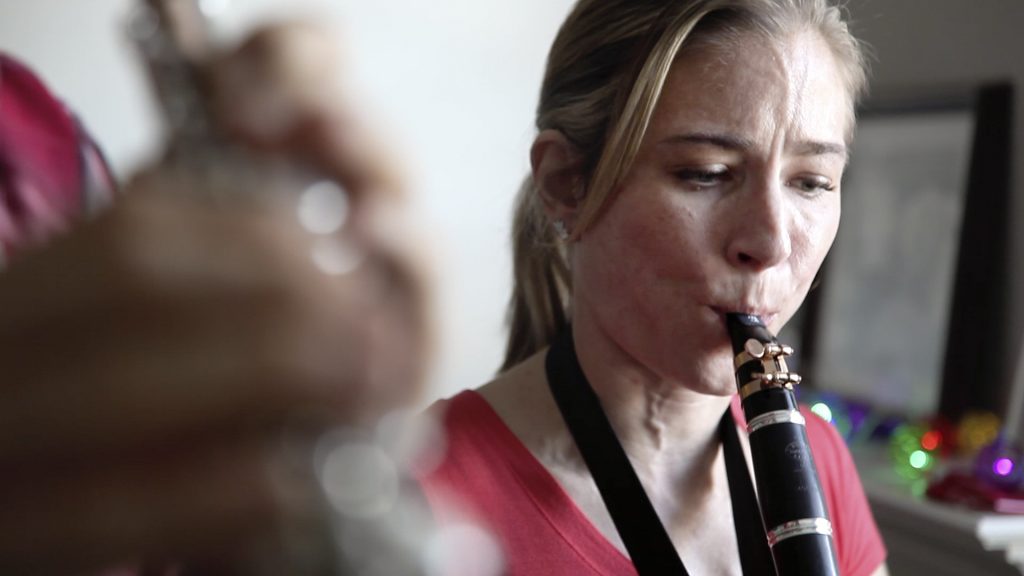 Katie Combest, 38, plays the clarinet with her boyfriend, David Wade, at her Lewisville apartment. Photo/Thorne Anderson

Combest was good — so good she decided to study music in college at a conservatory called Eastman School of Music in Rochester, New York.

After graduation, she won a prestigious audition with one of the U.S. Army bands.

“I wasn’t able to accept the job because I didn’t pass the physical. Because I can’t hear low pitches out of my left ear,” she says. “I had about six sets of tubes growing up, and I have a lot of scar tissue in my ear. Even with the TV, I have to have the subtitles on if a male is speaking.”

It crushed her to lose out on the job and a perk of a military career — loan repayment. For qualified applicants, the Army will pay up to $65,000 of an enlisted soldier’s outstanding student loans.

Symphony auditions across the country got too expensive, so she went back to school. This time, Combest studied business and Spanish at the University of North Texas.

“I thought, ‘Well, I need to be marketable if I decide to do something else, or if I can’t support myself doing music,'” she said.

She tried a couple of office jobs, like medical scheduler and another at a realty inspection company. She never lasted more than a couple months; she just couldn’t leave music behind.

VIDEO: The debt is ‘kind of like a thorn in my side.’

By the time she finished at UNT, the Eastman degree was paid off, thanks to scholarships, help from her grandmother and her own money.

Twelve years after finishing that second bachelor’s degree? Combest is staring down $38,000 in debt.

“The interest rate keeps climbing, and I can’t refinance it or change anything,” the Lewisville resident says. “I have to just pay a lot more if I want to pay it down.” 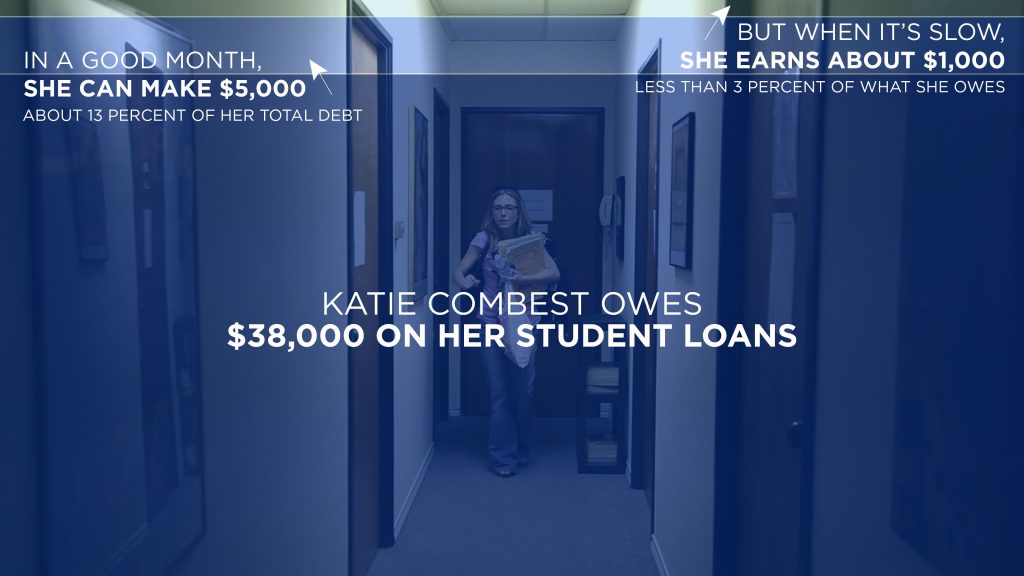 “I could put so much more money into paying off the student loan, but being self-employed you want a cushion, and I don’t want to go into credit card debt in case I ever need something so I want to have that reserve,” Combest says.

This is where’s she been for years. Now 38, she pays her rent and bills, withholds her taxes and saves a little each month, but she barely dents her pile of student debt.

“So many people just focus on ‘just go to college’ as if it’s just some generic product. And it’s not.”

Texans have $83 billion in outstanding student loans. The typical debt balance for someone who graduated from a public, four-year college is $21,000. 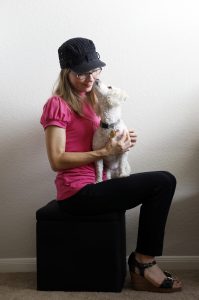 Katie Combest with her dog, Strudel, at her home in Lewisville. Photo/Lara Solt

“Students are making life-altering decisions with minimal understanding, at a time of maximum distraction,” says Jeff Webster, director of research at TG.

Webster says students often take out loans without understanding how they work. They also don’t always know what they’re in for if they can’t pay them back.

“If you happen to go into bankruptcy, you still have to pay them,” he says. “These will also trigger the confiscation of any income tax refunds.”

Not to mention, defaulting on student loans will tank a credit score. That can make it hard to get certain professional licenses, get a mortgage, even rent an apartment.

And here’s the thing: A lot of folks who can’t pay off their student loans didn’t even graduate. Webster says 80 percent who default did not earn a degree.

Webster says better loan counseling could make a world of difference, and so could helping students map their actual course of study. Because not all majors are created equal.

“So many people just focus on just [going] to college as if it’s just some generic product,” Webster says. “And it’s not.”

WOULD YOUR CHOICE OF MAJOR PAY YOUR BILLS?

TG built an online calculator to explore just that. It lets you compare different majors at the same college in terms of debt, salary and loan repayment after graduation.

For example, if you study aeronautics and aviation at UNT, the typical student earns $3,132 per month after graduation and spends only 8 percent of that salary on loan repayment.

The student who majors in music performance makes about $997 per month, and spends 30 percent of that on loan repayment.

Combest knows she would make more money and pay down her loans faster if she took an office job. She knows she’d be a more attractive candidate for a mortgage if she wasn’t self-employed and thousands of dollars in debt.

“If I didn’t have that student loan, I could get a home loan easily,” she says. “And, you know, I’m 38, I’d like to have a home and be a little more settled. And although this apartment is lovely, I’d like to have my own space.”

To her, the music helps balance the struggle.

So she’ll keep her clarinet — and the student loans, too.

ON THINK WITH KRYS BOYD: HOW TO MANAGE STUDENT DEBT

The average American college student will graduate with more than $35,000 in student loan debt.