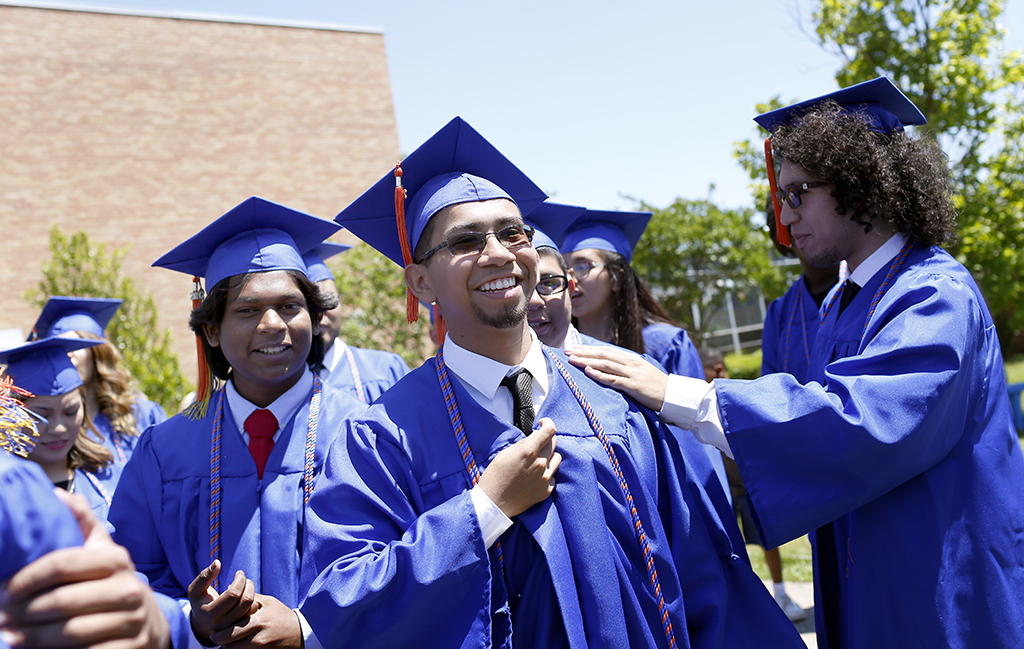 Joel Luera’s School Struggles Set Him Up For Success

Going to school in a tough neighborhood has its challenges, even for a high-achiever like Joel Luera. The high school debater is headed to college in the fall, but the road to graduation hasn’t been easy.

‘Where I’ve gotten is because of mistakes’

Joel Luera receives his high school diploma from W.W. Samuell High on June 1. A few weeks ago, he got a college degree – an associate’s diploma from Eastfield College.

None of this would be happening if he hadn’t messed up in middle school, he says.

“In middle school, I decided not to do what I had to do,” Joel says. “And, you know, I did poorly in school. …  And that’s why I ended up going here.”

He chose to attend W. W. Samuell Early College High School – it’s a school within a school where kids earn college credit while going to high school. Getting accepted into schools like these is a competitive process: There are interviews, recommendations letters and a lottery. 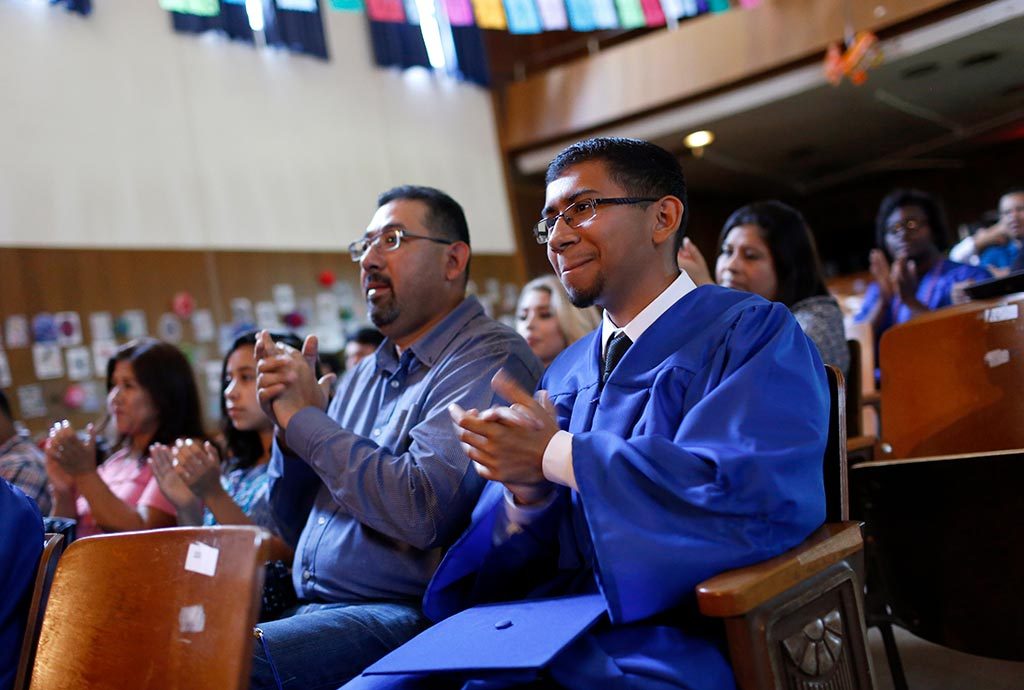 Joel claps along with his family while receiving unexpected recognition from a fellow student at the W.W. Samuell Early College High School gratitude ceremony. Photo/Lara Solt

Joel says he didn’t have the grades in middle school to get into a magnet high school like he wanted. But the early college program saw his potential.

“Where I’ve gotten is because of mistakes, but I don’t regret any of those mistakes because they’re part of who I am and I have to accept that,” he says. 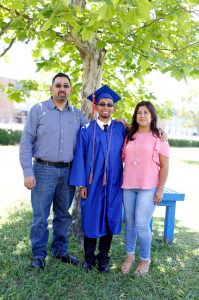 Joel has always been a high achiever. Last school year, though, was tough. He started taking college classes at Eastfield in Mesquite – a 40-minute commute each way from his home in Oak Cliff.

His schedule was packed – 20 credit hours the first semester, 18 hours the second. He ended up getting a D in speech and Cs in algebra and English his junior year.

“It wasn’t a very good time for me because I had a lot of negativity,” Joel says. “I don’t get anxious, but I think of things a lot and try to think of all the outcomes and stuff.”

On top of that, there were girl problems, and he wasn’t very social.

Toward the end of junior year, he started to come out of his shell. He went to prom with a friend, and in the fall, to homecoming.

Both dances were at Irma Rangel, an all-girl school in Dallas. He’d met both girls through debate. That was a turning point for him.

“That was the first school dance I’d ever went to and finally doing that, I was like, ‘OK, I think I could do this again,'” he said. “I went to homecoming there as well, and it was just like, I did things that took me out of my comfort zone, but it was enjoyable because they were things I would have never done otherwise.”

Saying Thank You On Stage

On the same day Joel got the associate’s degree from Eastfield, he attended what’s called a gratitude ceremony at Samuell High. Joel and his classmates wore their blue caps and gowns. The point of the ceremony was for students to thank someone who changed their lives.

“He has helped shaped who I’ve become and ensured that I would have the tools necessary to become who I aspire to be,” Sattar reads. “I would like to thank Mr. Cheatum for everything he has done for me.” 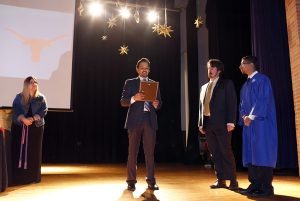 Joel wasn’t prepared for one moment – when his former debate partner Steve Vasquez got up on stage to thank him. Steve got teary-eyed and even joked that he kept working hard in debate, so he could one day beat Joel.

After the ceremony, coach Don Cheatum explained that Steve and Joel have been on-again, off-again friends.

“Freshman year they were both on the debate team with me,” he said. “Then they kind of had a falling out when they messed up at a major tournament and so it took about a year for them to warm back up again. This year, they’ve been partners again, and they were the best varsity team we’ve had.”

When he started teaching, Cheatum wasn’t sure he could stick with it. Joel, who came in with middle school debate experience, was one of those students who inspired Cheatum to keep going.

“What was even more important is that he befriended a lot of the older debaters. And that’s exactly what you do in any debate team,” Cheatum says. “It’s the ones that become interested and driven and learn the ropes form the older students and now he’s the older giving out help to everyone else.” 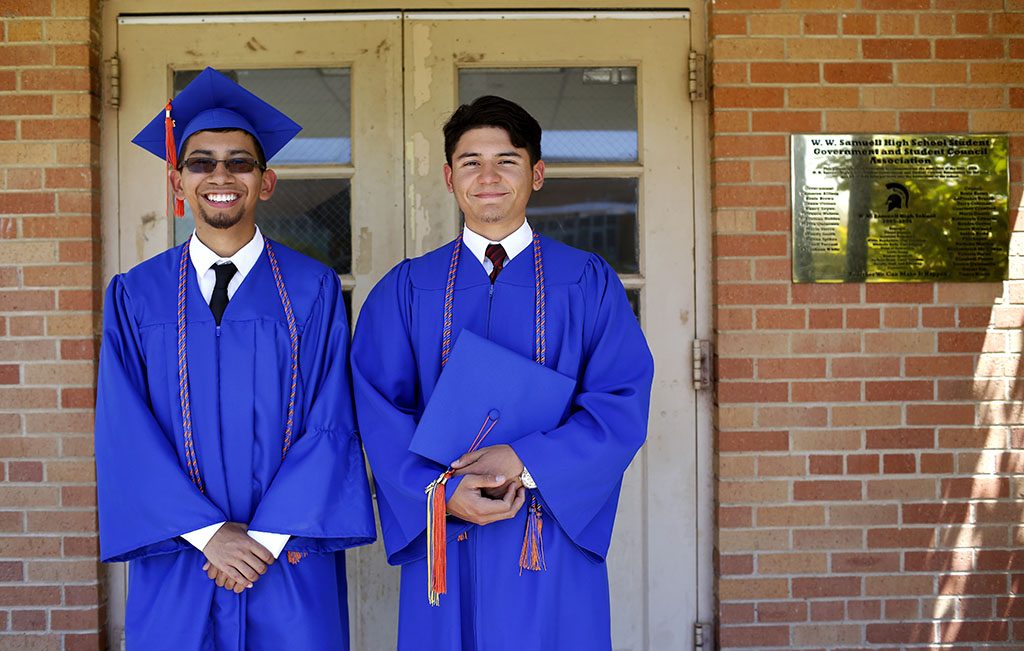 Joel Luera, with his friend Steve, who unexpectedly recognized him during a gratitude ceremony. Photo/Lara Solt

“He has helped shaped who I’ve become and ensured that I would have the tools necessary to become who I aspire to be.”
Joel talking about his debate coach, Don Cheatum

Plans For The Future

After a few academic stumbles in the early college program, Joel no longer feels overwhelmed. He took fewer classes this past semester and now, he’s ready for summer.

He plans to travel and work at Keeton Park Golf Course.

“I enjoy being productive and doing things. I don’t want to just sit at home all the time,” he says. “The current job I have at the golf course — I love that job.”

His job in the fall? He’ll be a full-time student in Austin at the University of Texas. Getting a $20,000 presidential scholarship to go there doesn’t hurt.

Next step: “Immediately, I’m going to work this entire summer; save up money. Then, in August, I’m going to UT Austin to be in my next three or four years of school. I plan on obtaining a degree in rhetoric and writing and then a second degree in probably something business related. I want to go into tech consulting now. [I still may enter] law, but I haven’t decided yet. But for sure, I want to get two degrees while I’m there.”

Dream job: “It’s either tech consultant or lawyer. It would be lawyer, but being a lawyer is expensive and law school is around $90,000. And it’s not as much as my ‘dream job’ as it was. It’d be a civil rights lawyer. As much as I want to do that, I can’t because the worries of paying off debt.”

Favorite quote: “You have the power over your mind – not outside events. Realize this and you will find strength.” – from the meditations of Marcus Aurelius

If I could do one thing over, it would be: “I don’t think I would do anything over. I am happy with where I am at and I’m happy with what I’ve become and the person I’ve become. So I don’t think I’d do anything over, even all the mistakes and things that I did wrong that I could have done better. I wouldn’t want to change the situation I’m in, so I would keep everything the same.”

Joel Luera, Through The Years

Alex Gutierrez On Life After High School: 'It's Gonna Be Up To Me'

After Losing His Best Friend, Ricky Rijos Plans To 'Live Life To The Fullest'